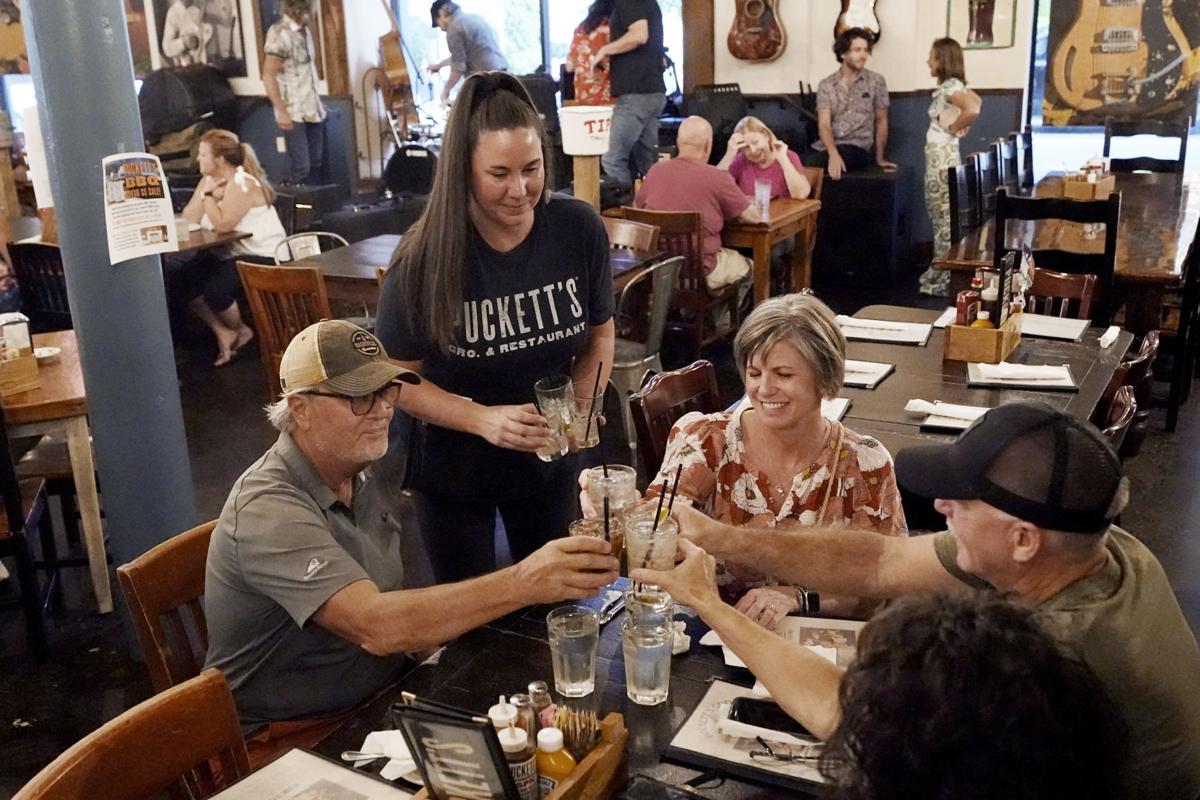 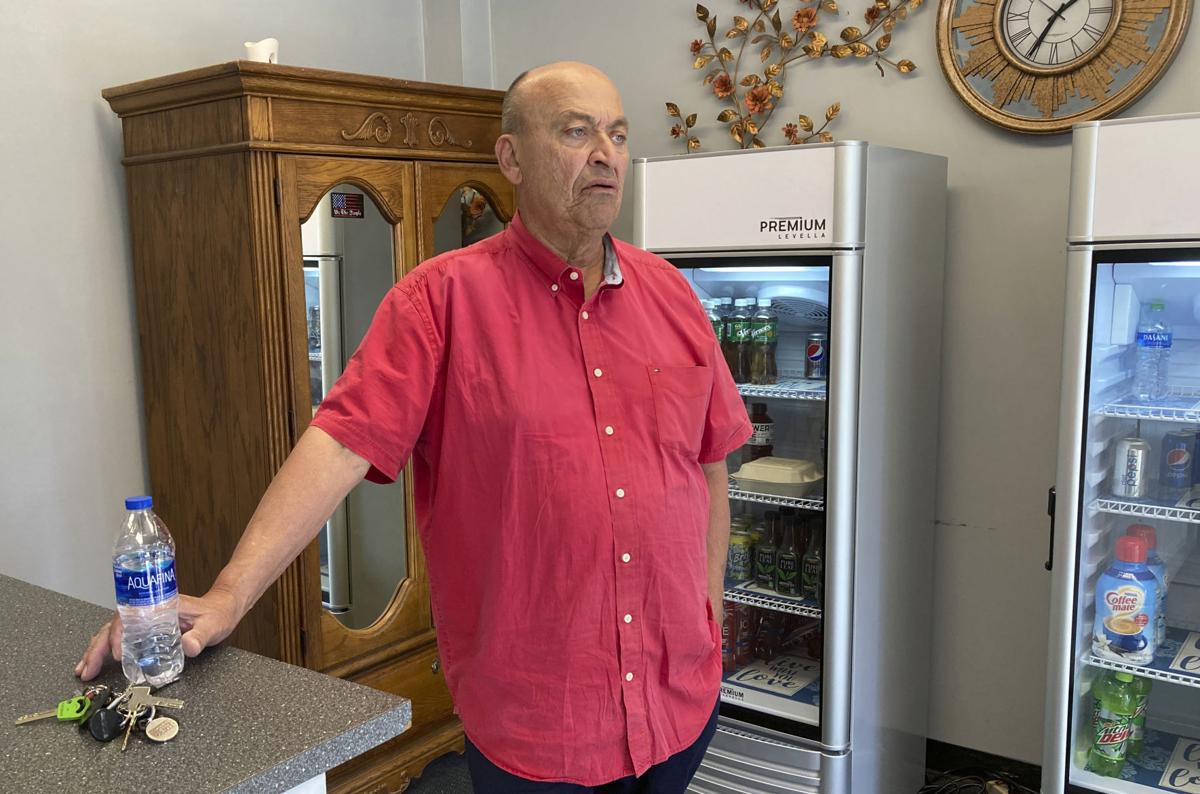 Mike Frank, owner of Clifford Street Cleaners, stands in the lobby of his business in Detroit. He adapted when the pandemic cut his dry-cleaning business, converting part of his store into a small market with toothpaste, laundry detergent, soft drinks and other essentials. [MIKE HOUSEHOLDER/THE ASSOCIATED PRESS]

Mike Frank, owner of Clifford Street Cleaners, stands in the lobby of his business in Detroit. He adapted when the pandemic cut his dry-cleaning business, converting part of his store into a small market with toothpaste, laundry detergent, soft drinks and other essentials. [MIKE HOUSEHOLDER/THE ASSOCIATED PRESS]

NEW YORK — Downtown businesses in the U.S. and abroad once took for granted that nearby offices would provide a steady clientele looking for breakfast, lunch, everyday goods and services and last-minute gifts. As the resilient coronavirus keeps offices closed and workers at home, some are adapting while others are trying to hang on.

Some businesses are already gone. The survivors have taken steps such as boosting online sales or changing their hours, staffing levels and what they offer customers. Others are relying more on residential traffic.

Many business owners had looked forward to a return toward normalcy this month as offices reopened. But now that many companies have postponed plans to bring workers back, due to surging COVID-19 cases, downtown businesses are reckoning with the fact that adjustments made on the fly may become permanent.

In downtown Detroit, Mike Frank's cleaning business was running out of money and, it seemed, out of time.

Frank started Clifford Street Cleaners eight years ago. Pre-pandemic, monthly revenue was about $11,000, but by last December, when many downtown offices had to close, revenue had dropped to $1,800, Frank said.

Frank had to borrow money from his wife to pay the bills. "It got down to, I was almost ready to go out of business."

Instead of shutting down, Frank adapted. He converted part of his store into a small market with toothpaste, laundry detergent, shampoo, bottled water, soft drinks and other essentials. He also delivered clean laundry and goods from the store.

Eventually, some foot traffic returned. With the combination of retail sales and dry cleaning, revenue is back up to about $4,100 per month, he said. That's enough to keep him afloat, and the figure is improving each month.

In Lower Manhattan, 224 businesses closed their doors in 2020 and 2021, according to the Alliance for Downtown New York. About 100 have opened.

"There's no question, it's hard for business districts like ours, we miss our workers," said Jessica Lappin, president of the Alliance for Downtown New York. "Nobody misses them more than local businesses."

Lappin predicts office workers will come back, but it might be two or three days a week, on different days or in shifts.

"Just in the way we had to adjust so dramatically to being at home all the time, there is an adjustment to coming back," she said.

A block from Wall Street, Blue Park Kitchen used to have lines out the door each weekday as office workers waited to buy one of the grain bowls Kelly Fitzpatrick served as a healthy lunch option.

"Things are completely different," she said.

Online orders now account for 65% of the business — although they are less profitable because the online apps take a cut. Higher-margin catering orders remain non-existent and Blue Park has reduced its staff by nine workers.

"At our peak in July 2021 (before the delta variant surge), we had about 65% of peak pre-COVID business," Fitzpatrick said.

Fitzpatrick has seen more offices reopen and hopes more companies return in October, before the slower holiday months of November and December.

Nearby, Aankit Malhotra took over Indian restaurant Benares with his brother in 2019. When the pandemic hit, overnight, their core banking clientele vanished. No one came in for the $13 three-course lunch special the restaurant was known for. Previously, lunch accounted for 95% of Benares' business.

Now, Benares has about 10 lunch orders a day, down from 100. But locals, grateful that the restaurant kept its pre-pandemic hours of 10:30 a.m. to 11 p.m. every day, are keeping the brothers afloat.

Business is back to around 70% of pre-pandemic levels, helped by delivery and dinner meals. The clientele has changed from workers to younger people and families from nearby Battery Park City.

"It's nice to see not just corporate people downtown. It's becoming more of a family-oriented place."

Jorge Guzman, assistant professor of business management at Columbia University, said the shift of economic activity away from downtowns is likely to last. There has been a boom in entrepreneurship in non-downtown New York areas like Jamaica, Queens, and the South Bronx.

"Downtowns are not going to die, exactly. It's not like Midtown's going anywhere. But it's going to be a little bit more of a mix, more residential and mixed-use concepts."

Across the Atlantic in London, office workers have been slowly trickling back to their desks since the government lifted COVID-19 lockdown restrictions on July 19. The U.K. saw a peak of delta cases in July, but the numbers fell sharply in about two weeks. Recently, however, cases have been climbing again.

The number of commuters is nowhere near pre-pandemic levels, making it tough for small businesses in Central London's financial district to survive.

"It was amazing, it was good, it was busy before the pandemic," said Rado Asatrian, who has worked as a barber at the Man-oj hair salon in the financial district for six years. Before COVID-19 , he usually had 10 to 15 customers a day, but now it's down to three or four.

"Now, it's just so empty," said Asatrian. He said he is considering moving to a busier location, switching careers, or moving abroad.

In some downtowns, while the workers are still remote, the tourists are back and providing a boost to businesses.

In Atlanta, Kwan's Deli and Korean Food is doing just about as much summertime business as it did before the pandemic, said Andrew Song, whose family owns the restaurant.

At the height of the pandemic, Kwan's had lost about 80% of its business, reduced its hours and cut staff. But the deli has bounced back thanks to tourists from the Georgia Aquarium and events at a nearby convention hall.

Still, the delta variant surge is creating uncertainty about the fall. Song said he has heard that some businesses have relocated permanently or downsized.

"It's sort of hard to imagine what it will look like with office regulars not returning or being more remote," he said.

In Nashville, Lyle Richardson, chief operating officer for restaurant operator A. Marshall Hospitality, said he has seen the city's restaurant industry ravaged by the coronavirus epidemic. He sits on the board of the Tennessee Hospitality Association trade group and estimates that hundreds of restaurants have had to close.

Those who stayed open made adjustments. Richardson stopped serving lunch at one restaurant, Deacon's New South, to focus on dinner after office workers went remote. But he kept his other restaurant, Puckett's Grocery & Restaurant, open from 7 a.m. to 11 p.m. to attract the tourists flocking back to the city.

"The normalcy we called pre-COVID, that no longer exists," he said. "We have to be prepared, on our toes, to adapt. "

Back in Detroit, business at Cannelle by Matt Knio, a downtown bakery and sandwich shop, has rebounded above 2019 levels after a precipitous drop-off early in the pandemic. Baseball and football crowds are back, and outdoor dining and takeout remain popular.

If businesses are subject to more restrictions when the weather gets colder, Knio believes he can rely on the lessons learned so far in the pandemic to get by.

"I think we know our way around now, and how to deal with it," he said. "We'll be able to do takeout and curbside pickup."