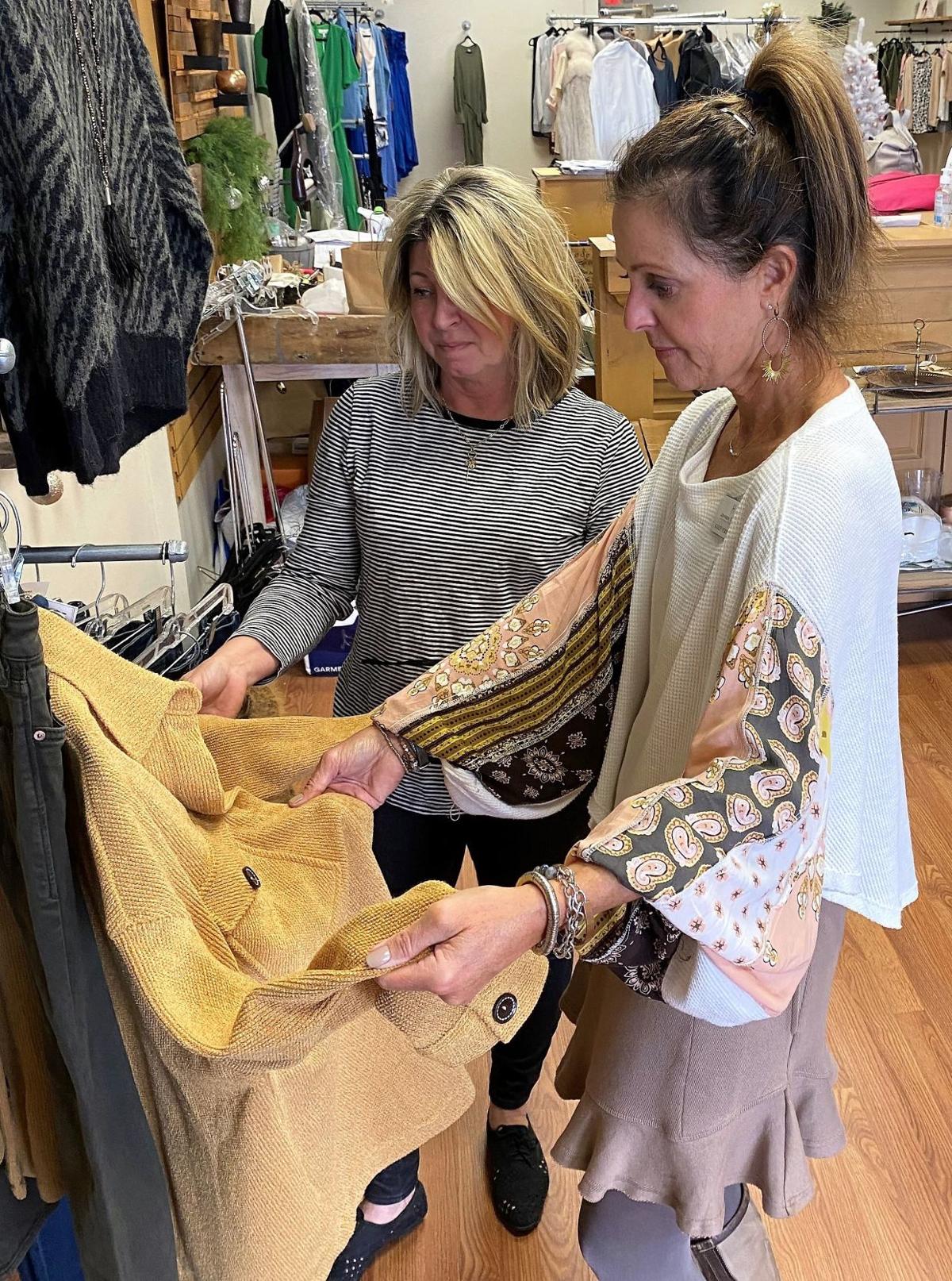 Indigo's owner Denise McNeill, left, and customer Karen Strickland look over a "shacket" in the store last week. McNeill said the combination of a shirt/jacket will be a hot-selling item this holiday season. [MICHAEL WETZEL/DECATUR DAILY] 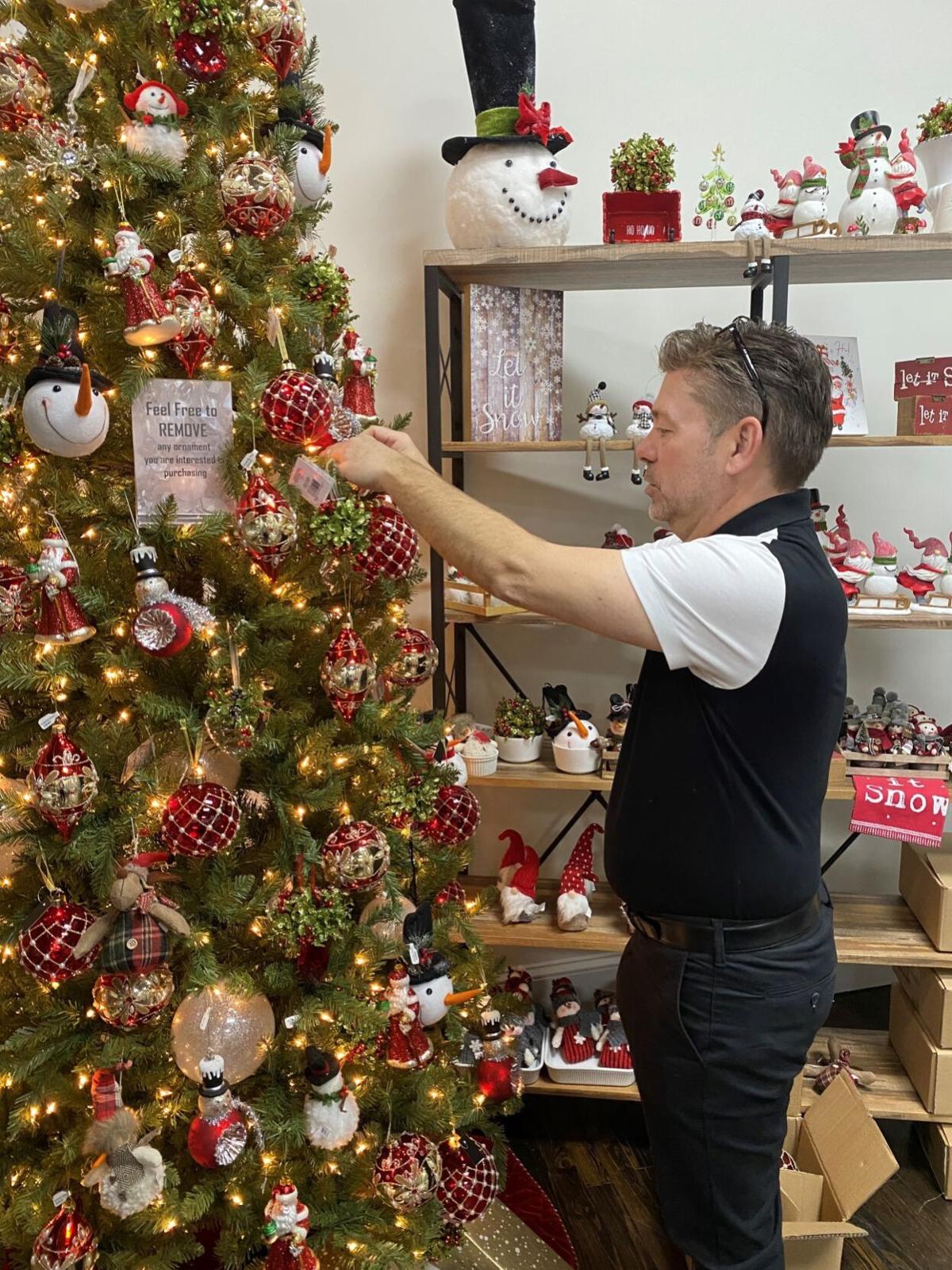 Indigo's owner Denise McNeill, left, and customer Karen Strickland look over a "shacket" in the store last week. McNeill said the combination of a shirt/jacket will be a hot-selling item this holiday season. [MICHAEL WETZEL/DECATUR DAILY]

While the change by some stores from one-day blowout sales on Black Friday to multiple sales events preceding Christmas is likely to reduce the madness and long lines of traditional day-after-Thanksgiving shopping, local retailers say Black Friday is not going away.

Charles Christopher, manager at Martin’s Family Clothing on Beltline Road Southwest in Decatur, said he has noticed the trend of more businesses offering “Black Friday sales” throughout November, but his store plans to stay with the traditional day-after-Thanksgiving specials.

In recent years, more than 200 people have lined up at Martin’s in the wee hours of the morning, a few times with temperatures in the 30s, to be the first in the store when the doors open at 5 a.m. on Black Friday. Many of those in line have said they enjoy the tradition of getting out early for the specials. They are rewarded by receiving gift cards or a coupon for 50% off one item, Christopher said.

“We’re not sure what we’re doing this year, but if you are in line, you will receive some sort of discount,” Christopher said.

In a survey released Thursday, the National Retail Federation (NRF) said holiday shopping is projected to be up over last year with 108 million shoppers making transactions on Nov. 26, Black Friday, the unofficial kickoff of the holiday shopping season. According to the survey results, 64% are likely to shop in stores this Black Friday, up from 51% last year when COVID-19 concerns reduced in-store shopping.

“We’re expecting another record-breaking holiday season this year, and Thanksgiving weekend will play a major role as it always has,” NRF President and CEO Matthew Shay said. “Nonetheless, consumers are starting earlier than ever to be sure they can get what they want, when they want it, at a price they want to pay. Black Friday stopped being a one-day event years ago, and this year some consumers started shopping for Christmas as early as Halloween.”

The average consumer plans to spend just under $1,000 on Christmas gifts, according to the survey.

NRF said 66% of holiday shoppers surveyed in early November plan to shop Thanksgiving weekend this year. That amounts to an estimated 158.3 million people, up from 156.6 million last year but still below the 165.3 million in pre-pandemic 2019. About 28% of retail shoppers say they’ve already finished their Christmas gift buying. The percentage was 18% this time last year, the NRF said.

Electronic Express at the Decatur Mall is one of those businesses spreading Black Friday-type sales across the month.

“We’ve had Black Friday deals since early November,” said sales manager Jasmine Bastin. “We’re trying to get more customers in the store. Sales have been good all month. We’ll also have more sales on Black Friday.”

She said 55- to 65-inch television sets, laptops and Nintendo Switch Bundles are in high demand this holiday season.

For the second consecutive year, Walmart also is spreading sales throughout the month.

He said Walmart's "Black Friday Deals for Days" events will offer Black Friday pricing that is more convenient, and safer, for shoppers.

Crowson said the discount retailer with five locations in Morgan, Limestone and Lawrence counties is having three in-store and online sales events during November.

Walmart no longer is open on Thanksgiving. A few years ago, the discount chain offered early Black Friday deals beginning at 6 p.m. Thanksgiving and received widespread criticism for being a distraction from family gatherings. On Black Friday, the stores’ hours will be from 5 a.m. to 11 p.m. local times.

Christopher at Martin's and some others feel supply chain issues are behind the "Black Friday month" concept. They say some shoppers are afraid their gift items won’t be available on Black Friday so they buy it early.

“Also, buying Christmas gifts early will have people spending more money,” Christopher said. “Then people go back to buy that shirt they have been thinking about and end up spending more. People are buying earlier online, too. Our online sales have been very good. Amazon and others are having more delivery problems.”

“I think people are a little leery because of supply chain issues,” she said. “Some stores may have trouble getting merchandise, so spreading out Black Friday helps them. And it allows them to avoid the mad rush on Black Fridays.”

Two other downtown Decatur business owners are gearing up for a busy Black Friday and holiday shopping season.

“Black Friday makes up for January,” said Joey Crews, owner of Shops on 2nd Avenue. “People still enjoy getting out there on Black Friday. We are busy. It’s fun for a lot of people.”

Denise McNeill, owner of Indigo’s women’s boutique, said, “We’ve ordered some things specifically for Black Friday. We have sales every month. I’m trying to drive business here, and Black Friday is certainly important to our business.”

She said the hot item this Christmas season is a shacket, a cross between a shirt and jacket. “It’s thicker than a shirt, but thinner than a jacket.” It sells for about $70.

“Also, Aztec print is very popular this year,” she added.

But Black Friday is not a pivotal sales day for all businesses.

“Black Friday has never been great for us,” said Janie O’Brien, co-owner of Threads Boutique on Bank Street in Decatur. “(Business) will pick up a little on Black Friday. Small Business Saturday is good for us.

"We run deals through the holidays. Black Friday really is not a big, huge day for us.”

The Alabama Retail Association is expecting holiday sales to increase by 10% or more for the second year in a row, with an increase in in-store shopping over last year.

Loyalty to family, instead of CNN, puts Chris Cuomo at risk