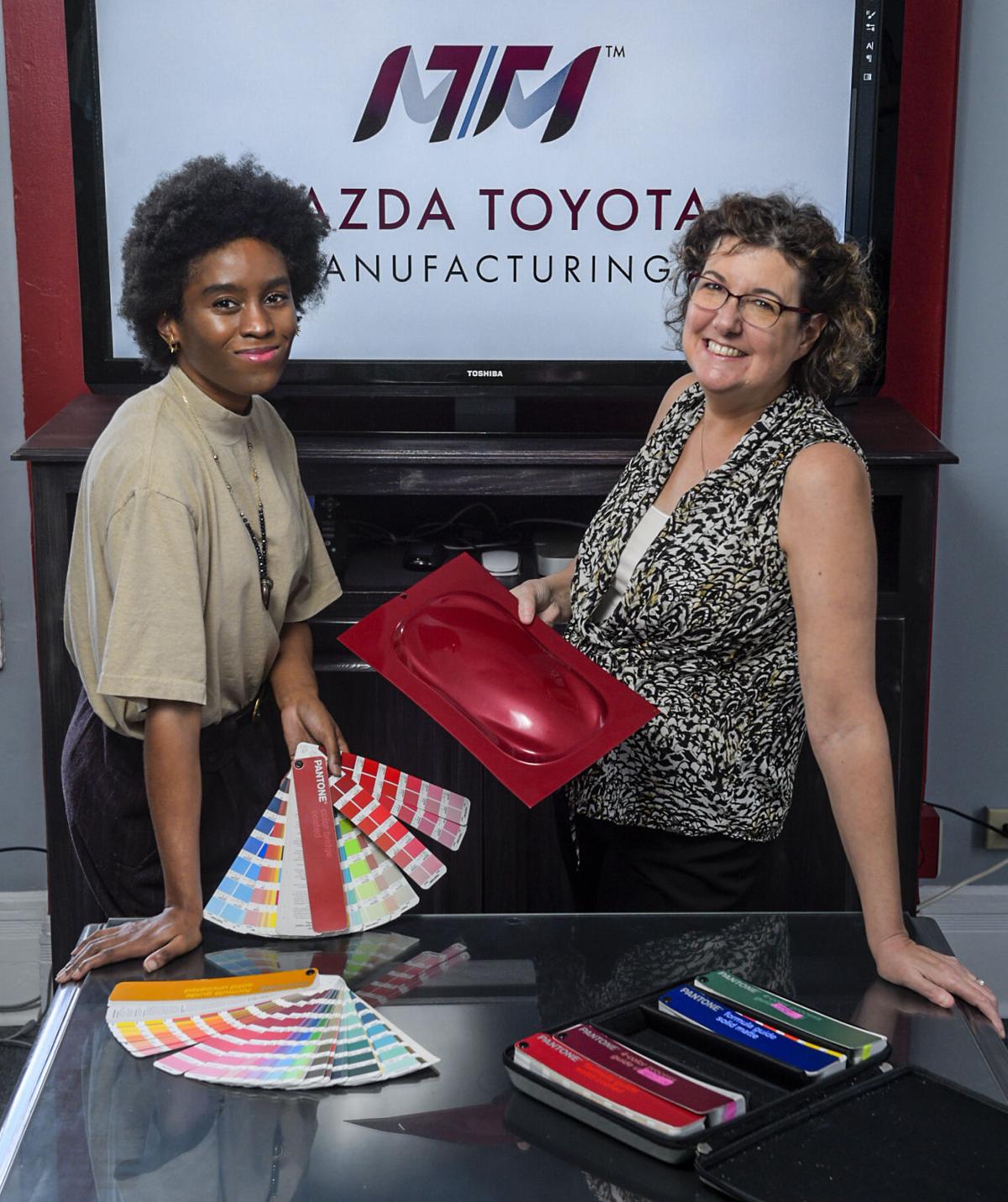 Red Sage Communications founder and President Ellen Didier, right, and production artist Rayna McGuire helped design the new logo for the Mazda Toyota Manufacturing plant being built in Limestone County. Didier is holding the part that the car manufacturer gave Red Sage so they could replicate the color in the logo. [JERONIMO NISA/DECATUR DAILY] 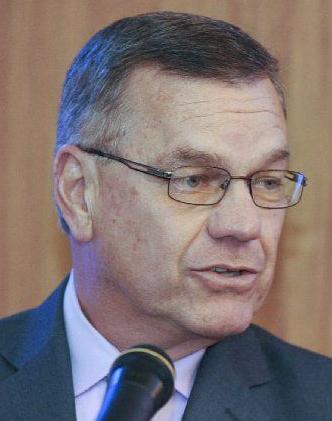 Ellen Didier pulled up to the small Decatur office of Red Sage Communications one day in the early years of the marketing agency, where the cars of her two employees were parked.

Today, the business founded by Didier in 2006 and initially based in her home has grown to a staff of 11 employees and expanded beyond a mostly local client base to working with clients in 14 states and more than half of the counties in Alabama. A Huntsville location opened a year ago.

“I don’t think I ever questioned it wouldn’t work because we continued to grow, even with the Great Recession,” said Didier, 52, Red Sage's president and creative director. And, despite the pandemic that has crippled some businesses this year, “we have experienced steady year-over-year growth since our founding.”

Didier said the timing of Red Sage's entry into the market and its mix of services have contributed to the company’s growth.

“We started before the Great Recession and gained a lot of clients that were nontraditional ad agency clients,” she said. “These were mostly in economic development and industries (where companies sell to other businesses) and were due to our expertise building websites.”

Didier said that during the recession, from December 2007 to June 2009, her major advertising agency competitors were hard hit and most of them ended up going out of business.

“Because we had a nontraditional customer base and were based in more website and digital marketing, we survived,” Didier said.

Didier said there’s a greater need for outside marketing expertise today because of social media and online advertising. In the past, traditional advertising agencies had a much more limited customer base focused on traditional media, she said.

“Now, just about every company and industry has recognized the need for additional help from an outside partner because there are exponentially more marketing tools to choose from — and they keep changing,” she said.

Another factor in the company’s success: “the reputation for integrity and quality we have built,” Didier said.

Some of Red Sage’s major clients are Ace Aeronautics; radiation shielding manufacturer Artemis Shielding, Cornerstone Detention and its family of companies, Huntsville Hospital and many of the hospitals in its system including Decatur Morgan, Huntsville Botanical Gardens and The Orthopaedic Center.

“We are currently working on a campaign to promote Lake Guntersville and are working to help promote the Singing River Trail,” she said. The planned trail is a 70-mile greenway that would connect communities across north Alabama.

A significant development for the company came in late October when Mazda Toyota Manufacturing, the joint venture building a sprawling automotive facility in Huntsville-annexed Limestone County, unveiled its corporate logo, which was developed through a partnership with Red Sage.

“It is bringing tremendous visibility to our company,” Didier said. “We are so proud of the quality of the work we have done on this project and think it is a great example of our overall design quality and capabilities.”

Didier said it’s not common for a company as significant and visible as Mazda Toyota Manufacturing to choose to work with a small local company instead of going with a big-city agency for its branding.

Toni Eberhart, a spokeswoman for Mazda Toyota, said the company is committed to serving as a hometown company and one of the ways to demonstrate that commitment is through collaboration with local partners when possible.

“The key consideration when evaluating a creative partner agency for the design and development of our corporate logo stemmed from a desire to find someone local,” she said. “We were drawn to Red Sage by their demonstrated success as a marketing agency serving north Alabama for more than 10 years and their passion and excitement in the opportunity to work with our team.”

A Connecticut native who has lived in Alabama for 26 years and in Decatur most of that time, Didier described her career path as a nontraditional one. She attended Carnegie Mellon University, pursuing a degree in architecture, but dropped out after three years. After she started Red Sage, Didier received a business administration degree from Athens State University.

“My first job after college was for a printing company, and I did my first freelance graphic design at that time,” she said. She developed her design skills, then built her first website at a time when most companies didn’t have websites because they were so new.

“I was blessed to have employers who took a chance on me and gave me room to explore and grow my skills beyond what my job description stated,” she said. “I was fortunate to land on a path that was a perfect fit for my natural skills and interests. I definitely see this as God’s guidance in my life.”

Didier was employed with another marketing firm when she decided to start her own business, a move that would give her the greater flexibility that she needed at the time as the mother of two young daughters. Her husband, Dan Thompson, helped her launch the business, with the couple using their savings to get started.

“He was working full time as program manager for GE in Decatur, and did our books, payroll and taxes in his spare time,” Didier said. After Thompson retired from GE, he took a more active role in Red Sage as vice president of operations. “He has been an absolutely critical element to our success and growth,” she said.

Didier worked out of the family’s home for the first 14 months, with her first project developing a brochure for OSCO Interiors. Other early clients included Decatur City Schools and Decatur-Morgan County Chamber of Commerce.

In June 2007, she moved into office space at Bradford Square, at 14th Street Southwest and Central Parkway, and hired two full-time employees. The company’s Decatur location has been on Second Avenue since 2011.

She said there’s a direct relationship between her company’s success and the Decatur and Morgan County community’s support for small businesses, startups and entrepreneurs.

And, colleagues say, Didier has given back, encouraging other entrepreneurs.

Larry Waye, the founder and former executive director of the Decatur-Morgan County Entrepreneurial Center, recalled meeting Didier in 2010 during the foundational stages of the E-Center.

“My first contact with her was in search of someone to help develop our initial website,” Waye said. “She took the time to educate me on the current status of websites, new businesses, processes, requirements and costs. She gave clarity and direction right from the beginning.”

The E-Center, a business incubator, provides coaching, counseling, mentoring and access to financing for its clients.

“Her passion as an entrepreneur and her desire to see others succeed built a solid relationship that ultimately led to her becoming a vital part of the SMART START Business 101 course where she continues to be one of the key speakers every session,” Waye said. “As a result, she has powerfully invested in almost every business startup that has come through the E-Center, missing only those where we had conflicting dates.”

Didier now serves on the E-Center’s board of directors, and Waye said she continues to “encourage, enthuse and empower business startups and small businesses.”

Didier is also board chair of the Decatur Morgan CEO program, an E-Center partnership with the University of Alabama in Huntsville and The Midland Institute, which was the first in the state to help high school students start businesses while receiving course credit.

“Ellen invests so much time supporting young people and entrepreneurs because she believes in our community and its future,” Joseph said. “She is someone who many people, including myself, consider a mentor and a friend."

Didier has some advice for other entrepreneurs.

“Make integrity and creating a positive customer experience your top priorities,” she said. “Pay attention to your industry and how it could be changing so you can quickly adapt. If you aren’t changing and growing, you are dying.”

Kevin Na has a big finish and wins the Sony Open

Apaches object to Forest Service review of huge copper mine

From Citroën to Dodge, meet the Stellantis family of vehicles

Auto review: Corvette Stingray may be too fast and furious for mere mortals