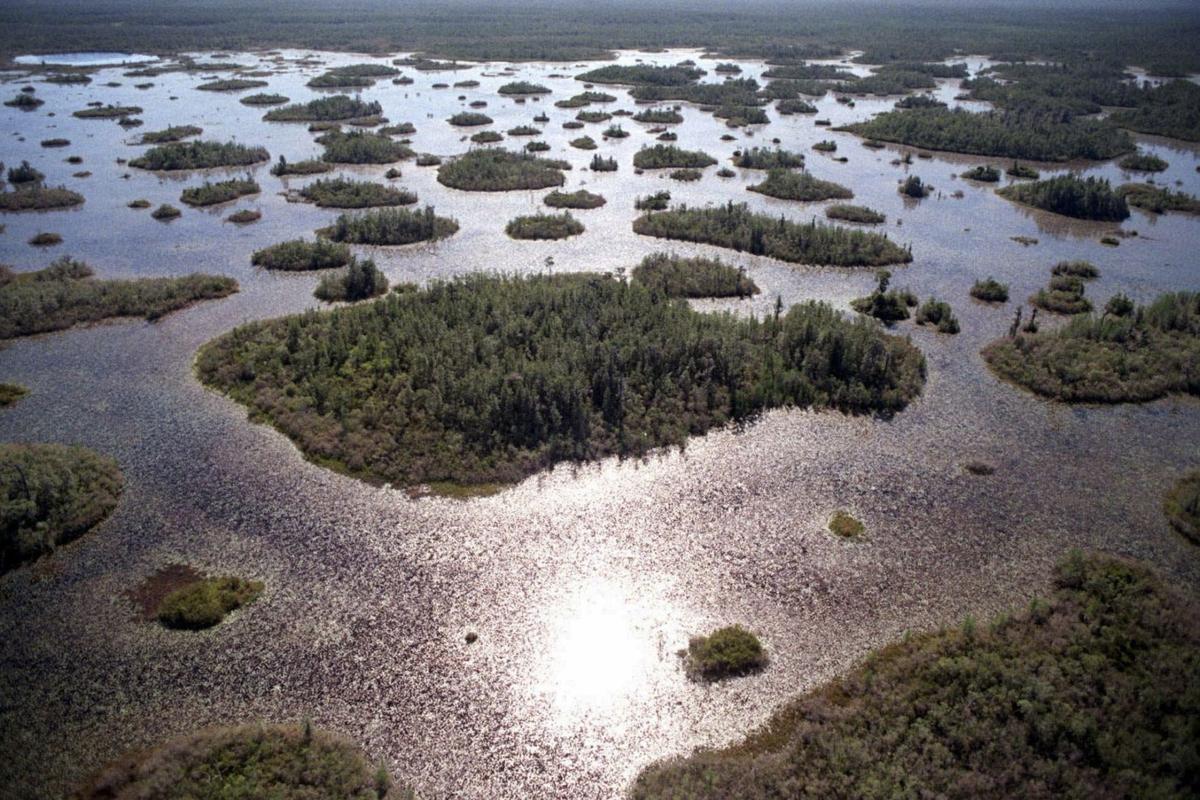 The Okefenokee National Wildlife Refuge in southeast Georgia is seen in 1997. A battle over whether to allow mining near the vast wildlife refuge rests with Georgia state regulators after federal agencies declared they no longer have oversight. [STUART TANNEHILL/THE FLORIDA TIMES-UNION/FILE] 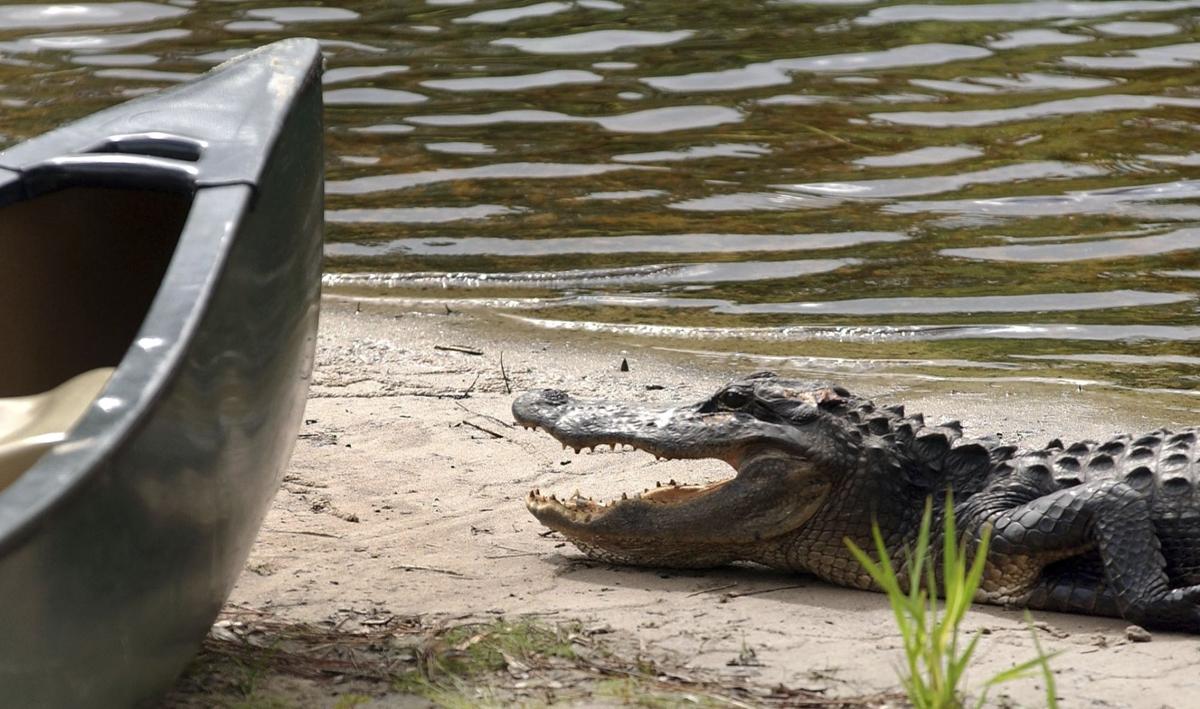 An alligator hangs around the canoes at Okefenokee Adventures in 2007 at the entrance to the Okefenokee Swamp in Charlton County, Ga. [CHRIS VIOLA/THE FLORIDA TIMES-UNION/FILE]

The Okefenokee National Wildlife Refuge in southeast Georgia is seen in 1997. A battle over whether to allow mining near the vast wildlife refuge rests with Georgia state regulators after federal agencies declared they no longer have oversight. [STUART TANNEHILL/THE FLORIDA TIMES-UNION/FILE]

An alligator hangs around the canoes at Okefenokee Adventures in 2007 at the entrance to the Okefenokee Swamp in Charlton County, Ga. [CHRIS VIOLA/THE FLORIDA TIMES-UNION/FILE]

FOLKSTON, Ga. — More than 160 years after her great-great-grandfather settled on a patch of land surrounded by water in the Okefenokee Swamp, Sheila Carter takes visitors on guided canoe tours for firsthand looks at the swamp's abundant alligators and stilt-legged birds wading among blooming water lilies.

Even when she's not working, Carter often paddles the tea-colored waters to find peace amid the vastly unspoiled wilderness. She fears it could be irreparably harmed if a mining company is allowed to dig for minerals just outside the Okefenokee, home to the largest U.S. wildlife refuge east of the Mississippi River.

"I've paddled the swamp all my life," said Carter, whose ancestors first came to the Okefenokee in 1858. "They cannot 100% guarantee they would not destroy or harm the swamp. And I don't want them there."

Twin Pines Minerals of Birmingham has spent the past two years seeking government permits to mine titanium dioxide on land 2.9 miles from the southeastern boundary of the Okefenokee National Wildlife Refuge. The plan sparked an outcry that reaches far beyond this sparsely populated community near the Georgia-Florida line.

Federal scientists have warned that mining near the Okefenokee's bowl-like rim could damage the swamp's ability to hold water. Environmental groups have rallied thousands to write or call regulators and elected officials.

For now, the decision on whether the mine gets approval rests with the Georgia Environmental Protection Division. The state agency often considers permits for such projects in tandem with federal regulators. The U.S. government initially had a role in assessing the Twin Pines project near the Okefenokee until then-President Donald Trump changed the rules, narrowing the types of waterways that qualify for federal protection under the Clean Water Act.

The Army Corps of Engineers, which had been reviewing a federal permit for the Twin Pines mine, declared in October that as a result of those rollbacks it no longer had jurisdiction over wetlands on the 739-acre site outside the swamp.

That left state regulators in Georgia with sole permitting oversight of the project.

"We're in uncharted waters," said Bill Sapp, an attorney with the Southern Environmental Law Center. "Federal agencies like the Corps and the Environmental Protection Agency have always been involved in making these types of permit decisions involving wetlands, especially when you've got a natural resource of the caliber of the Okefenokee."

The proposed mine near the Okefenokee refuge is just one high-profile example of federal regulators sidestepping projects that could pollute streams or drain wetlands because of the rule changes under Trump.

Garman said comparable data from before the rule was changed was not readily available. However, an online database maintained by the Environmental Protection Agency shows that under the prior rules, 42% of waters and water features evaluated by the Army Corps since August 2015 met the criteria for federal protection.

President Joe Biden's administration has ordered a review of Trump's rule changes and could move to undo them. But some conservation groups fear that would take too long and hope to get Trump's rollbacks overturned by a judge.

"Impacts are occurring across the country," said Kelly Moser, a Southern Environmental Law Center attorney challenging the rollbacks in U.S. District Court in South Carolina. "With that sort of rate of waters losing protection, there is no time to waste."

The Okefenokee National Wildlife Refuge covers nearly 630 square miles in southeast Georgia and is home to alligators, bald eagles and other protected species. The swamp's wildlife, cypress forests and flooded prairies draw roughly 600,000 visitors each year, according to the U.S. Fish and Wildlife Service, which manages the refuge.

Two decades ago, chemical giant DuPont retreated from plans to mine outside the Okefenokee after meeting fierce resistance. Twin Pines wants permits to mine a small fraction of the acreage DuPont pursued. Steve Ingle, president of Twin Pines, declined to answer questions about potential environmental impacts. Ingle has previously insisted his company can mine the site without harming the swamp.

Government scientists have been skeptical. In February 2019, the Fish and Wildlife Service wrote that the proposed mine could pose "substantial risks" to the swamp, including its ability to hold water. Some impacts, it said, "may not be able to be reversed, repaired, or mitigated for."

Ingle has said mining will occur on a ridge above the swamp and won't go deep enough to cause underground leaks.

Georgia environmental regulators are weighing five permit applications for the project. After an initial review, regulators in April sent Twin Pines 10 pages of questions and requested changes. Once those get answered, the agency plans a meeting for the general public.

"We see the EPD being extremely careful," said Neill Herring, a lobbyist for the Sierra Club in Georgia. "The agency's response is greater than it would have been prior to the Corps' removal from the field."

Mine supporters include Charlton County's elected commissioners, who were swayed by Twin Pines' promise to bring $300 million in investment and roughly 400 jobs to the area.

Dixie McGurn, who owns a Folkston shop where tourists stop for lunch, ice cream and souvenirs, admits she's torn. Many Okefenokee visitors are day-trippers, she said, who don't spend enough for local businesses to thrive.

"I don't want anything to happen to our great wonder," said McGurn, a former Folkston mayor. "But I worry about our workforce. We need something else to stimulate our economy here."

Georgia's new Democratic U.S. senators are pushing for federal scientists to stay involved even if they have no formal oversight role.

Sens. Jon Ossoff and Raphael Warnock asked the Fish and Wildlife Service in an April 28 letter to offer to help Georgia regulators review the state permit applications. Ossoff again called for the agency to "participate intensively" during a recent Okefenokee tour.

The offer got a cool reception from the Georgia Environmental Protection Division. Agency spokesman Kevin Chambers said he expects federal scientists to "offer input during the public comment process" on Twin Pines' applications.

Republican Gov. Brian Kemp also has gotten an earful. A campaign by the Georgia River Network to mobilize opponents of the mine generated 8,000 letters and 2,000 phone calls to Kemp's office, said Rena Peck, the group's executive director.

Kemp has declined to take a position. During an April stop in Folkston, he said: "I'm going to let the process play out."

Pelosi says Jan. 6 panel to move ahead without GOP's choices

US volleyball star back for 3rd Olympics after giving birth

Jordan's first year in NASCAR a missed layup with Wallace