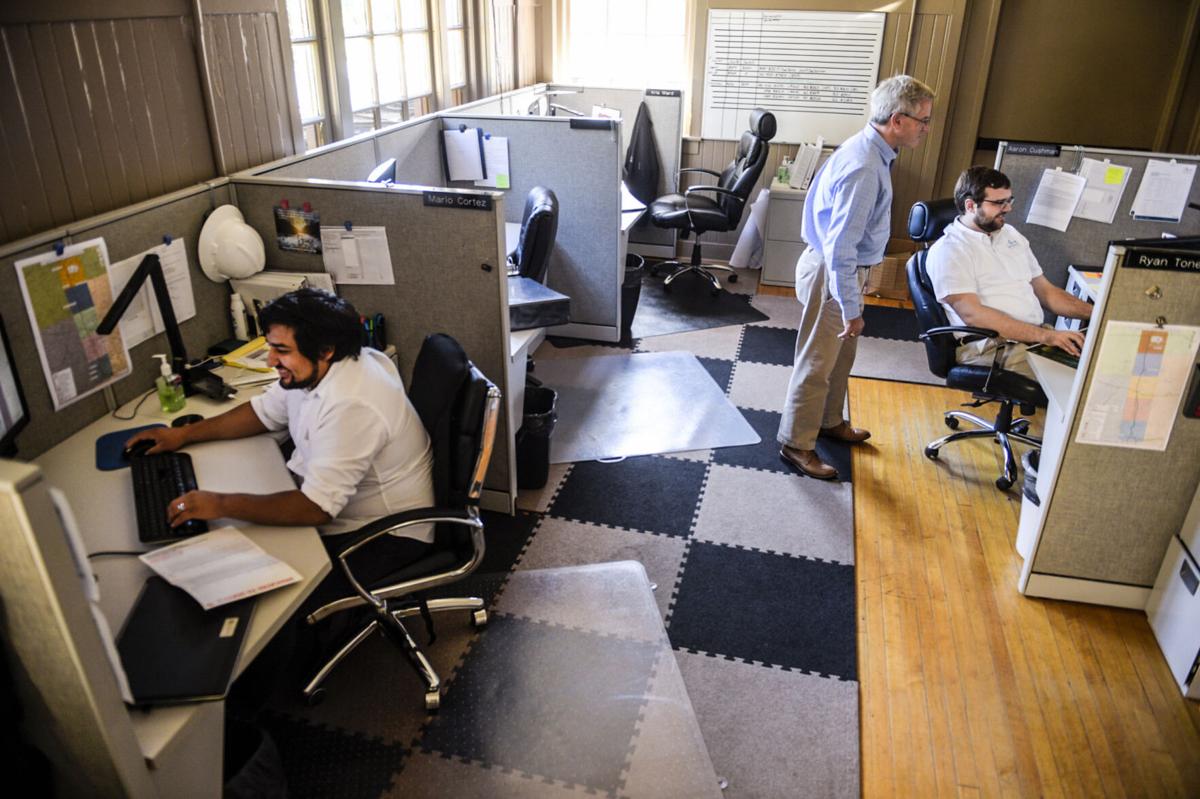 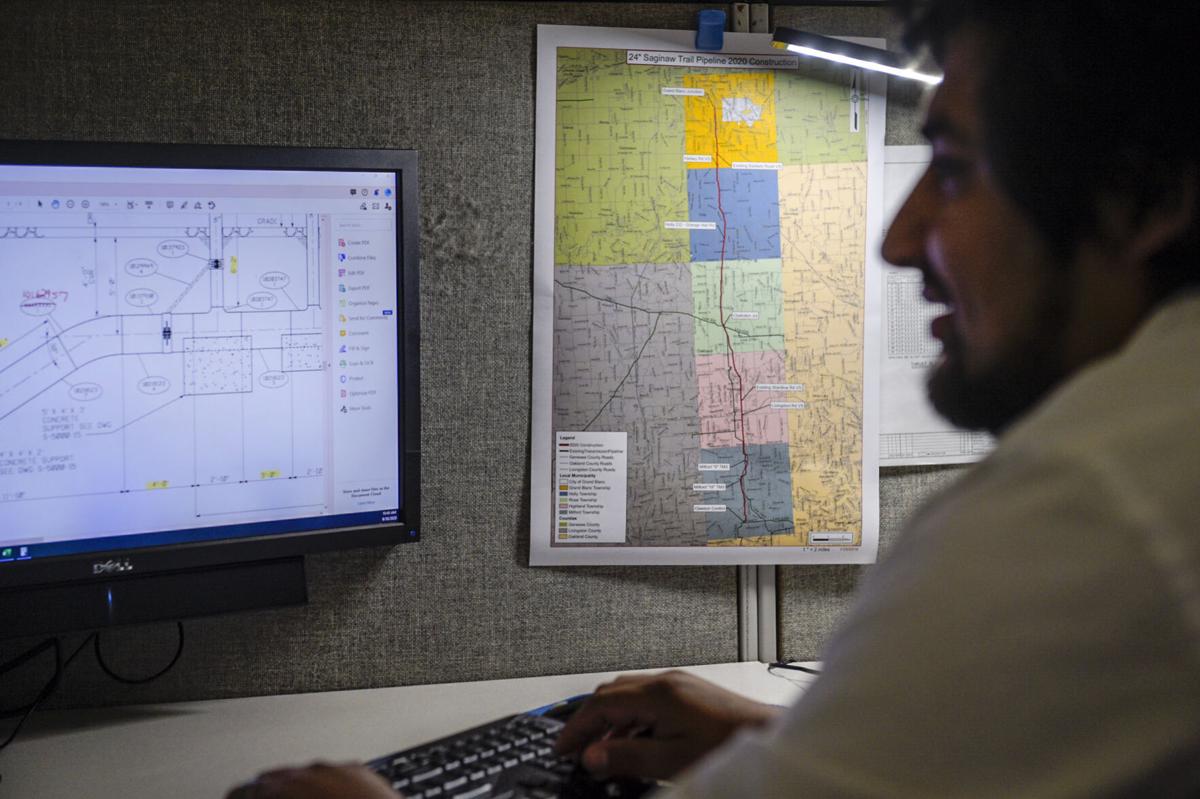 Mario Cortez works on one of Magnolia River's projects, a pipeline in Saginaw, Michigan, from the company's headquarters in downtown Decatur. [JERONIMO NISA/DECATUR DAILY] 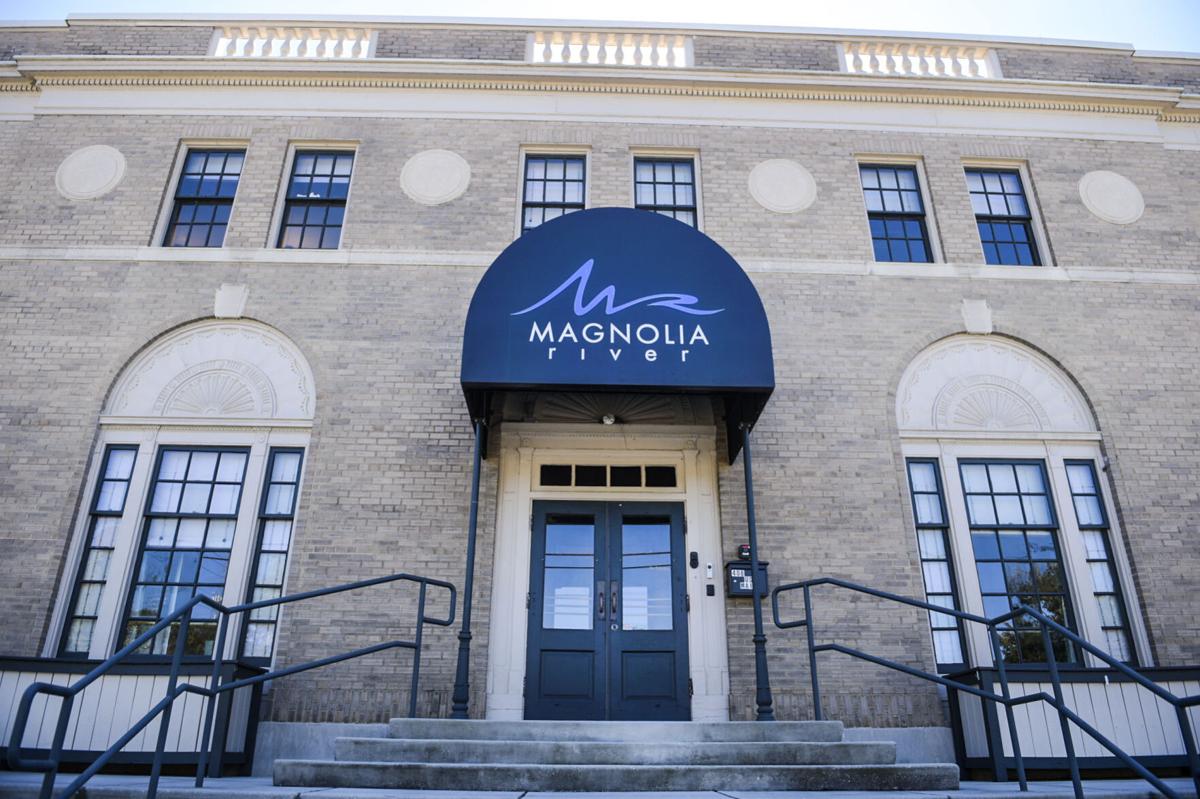 Magnolia River invested more than $1 million in renovating the historic building on Bank Street in Decatur that now serves as its headquarters. [JERONIMO NISA/DECATUR DAILY] 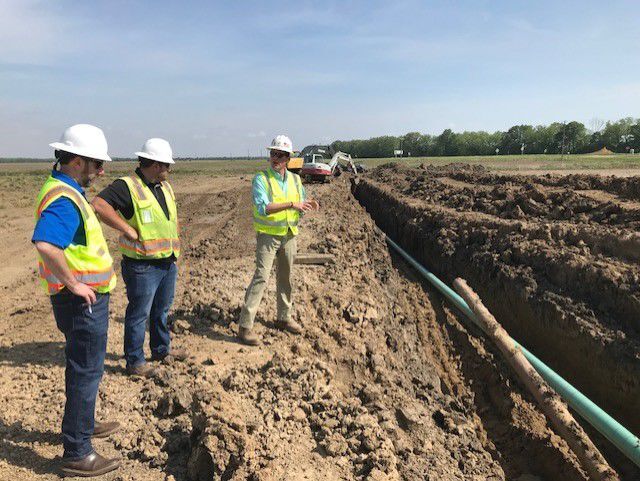 Mario Cortez works on one of Magnolia River's projects, a pipeline in Saginaw, Michigan, from the company's headquarters in downtown Decatur. [JERONIMO NISA/DECATUR DAILY]

Magnolia River invested more than $1 million in renovating the historic building on Bank Street in Decatur that now serves as its headquarters. [JERONIMO NISA/DECATUR DAILY]

A friend called Ronnie Hoff with a job offer 20 years ago and, even though Hoff was unemployed with a wife and two young children, he decided to turn down the offer and instead contract out his services to pipeline utility companies.

That led to him launching a business, Magnolia River, in September 2000 out of the living room of his home in Hartselle.

Now based in Decatur and thriving, Magnolia River Services Inc. marked its 20th anniversary last month. The business provides a range of services to pipeline utility companies and has grown from a home-based operation to a company with offices across the eastern U.S. and more than 400 employees.

Hoff, a self-described “operations guy,” left a management position with a natural gas company in May 2000, figuring he would have another job lined up within a few weeks. Three months later, the 35-year-old was still unemployed when he got a call from a company that was doing contract work for one of Hoff’s former employers, Alabama Gas Corp., now Spire. Rather than take a full-time position with the company, Hoff became his own boss to perform the work. The name of his new business initially was simple: his Social Security number.

“Once that contract was over, (Alabama Gas) started contracting with me directly, and Magnolia River was off to the races,” he said. “I was at the right place at the right time.”

In coming up with a name for the company, Hoff didn't want to use his own name and definitely wanted “river” to be included — "Nothing Runs Deeper" is part of the company's logo.

Using personal savings to launch the business, Hoff worked out of his living room for the first couple of years.

“Over the next five years, (Alabama Gas) stood us up as a small business with 40 to 45 employees,” making Magnolia River “a legitimate player in the market,” Hoff said. That company remains one of Magnolia River’s clients today.

With its headquarters on Bank Street in Decatur, Magnolia River now has 423 employees in 11 offices, including 10 outside Decatur — from Louisiana and Florida to Michigan. There are 55 employees at the Huntsville building and 46 in Hartselle, according to Jennifer Waddell, the firm’s process improvement manager. It provides pipeline utility companies with inspection, engineering and geographic information systems (GIS) services.

The company’s revenue has grown “an average of 15% to 20% a year over the last five years” and, despite the COVID-19 pandemic, “we have maintained our employment levels and still managed positive revenue growth,” McCleskey said. “Less than 10% of our revenue is from the state of Alabama.”

Hoff hired the first employees about a year and a half after starting the business.

“At one point, I was working 18-hour days,” he said. “Probably the biggest hurdle was the risk of hiring another person you’re solely responsible for.”

The business continued to grow, with Hoff and his employees moving from his home to a three-room office.

“In three months, we doubled our office size because we ran out of room, due to the amount of work we were getting,” Hoff said.

In 2014, some employees moved into the historic building on Bank Street after an investment of more than $1 million in renovations alone.

“We were pleased in 2014 when Magnolia River worked with our office and the Decatur Downtown Redevelopment Authority to maintain and grow their business in Morgan County,” said Jeremy Nails, president and CEO of the Morgan County Economic Development Association.

Nails said that to encourage Magnolia River to buy and renovate the existing historic building and invest at least $1 million in the property; and to hire and maintain a minimum of 50 new full-time employees there with an average annual wage of $60,000, not including benefits, the Morgan County Cooperative District and the Decatur Downtown Redevelopment Authority pledged $100,000 each to be paid out in four annual installments of $25,000 after the building was placed into service and the jobs target was achieved and maintained.

“Not only did this bring a minimum of 50 new high-paying jobs into downtown, it also took an existing building that Decatur City Schools owned and placed it back on the tax rolls for property tax purposes,” Nails said.

Nails said the business has made “a noticeable impact on the number of employees visible in the downtown community and revitalization of an historic downtown property.” Magnolia River’s successes in Hartselle and Decatur are “a testament to our infrastructure, workforce, and commitment to recruiting high-technology companies and high-demand jobs to our area,” Nails said.

Hoff and McCleskey noted several factors that have led to the company’s competitive edge and growth.

“We do everything it takes to put a natural gas or water pipeline in the ground except for the actual construction,” Hoff said. “Very few if any companies provide a comprehensive line of services that encompass a project from beginning to end.”

Hoff described Magnolia River as a “relationally driven company,” with repeat business fueling its growth. “We’re not a flash-in-the-pan company,” he said.

“It’s a great industry to be in,” he said. “Utility companies are stable. They don’t fold up. Year in, year out, they’re there and so are we.”

Employees in the energy, water and other sectors were among the U.S. Department of Homeland Security’s list of essential workers to continue critical infrastructure operations during the pandemic.

“As part of that, we were designated as a critical and essential workforce,” McCleskey said. He noted that the company, which executed an Employee Stock Ownership Plan, is now 37% employee-owned.

McCleskey said the business has also benefited from infrastructure replacement programs mandated by the federal government to deal with the country’s aging pipelines.

The company has an inspection division, with roughly 285 employees across 21 states.

“We have inspectors as far away as North Dakota, Montana and West Texas, (and in) North Carolina, Florida and Louisiana,” McCleskey said. “We validate and make sure construction contractors are doing everything according to plans and regulations.”

North Alabama Gas District uses software developed at Magnolia River, FloGIS, for utilities, municipalities and other organizations to track and manage data on their infrastructure.

When employees respond to an outage or other issue out in the field, “they have full mapping capability on an iPad or other mobile device in their trucks,” said Eric Smith, the technical services director with North Alabama Gas District, which serves Lawrence, Limestone, Colbert and Madison counties. Smith, a former Magnolia River employee, was Hoff's eighth employee and worked there for about 10 years, most recently as operations manager.

Digital mapping gives employees “the ability in the field to see what they’re (dealing with) when they respond,” Smith said.

The company is planning further expansion.

“We hope to expand all of our existing services geographically up the East Coast by building upon our Charlotte, North Carolina, office,” McCleskey said.