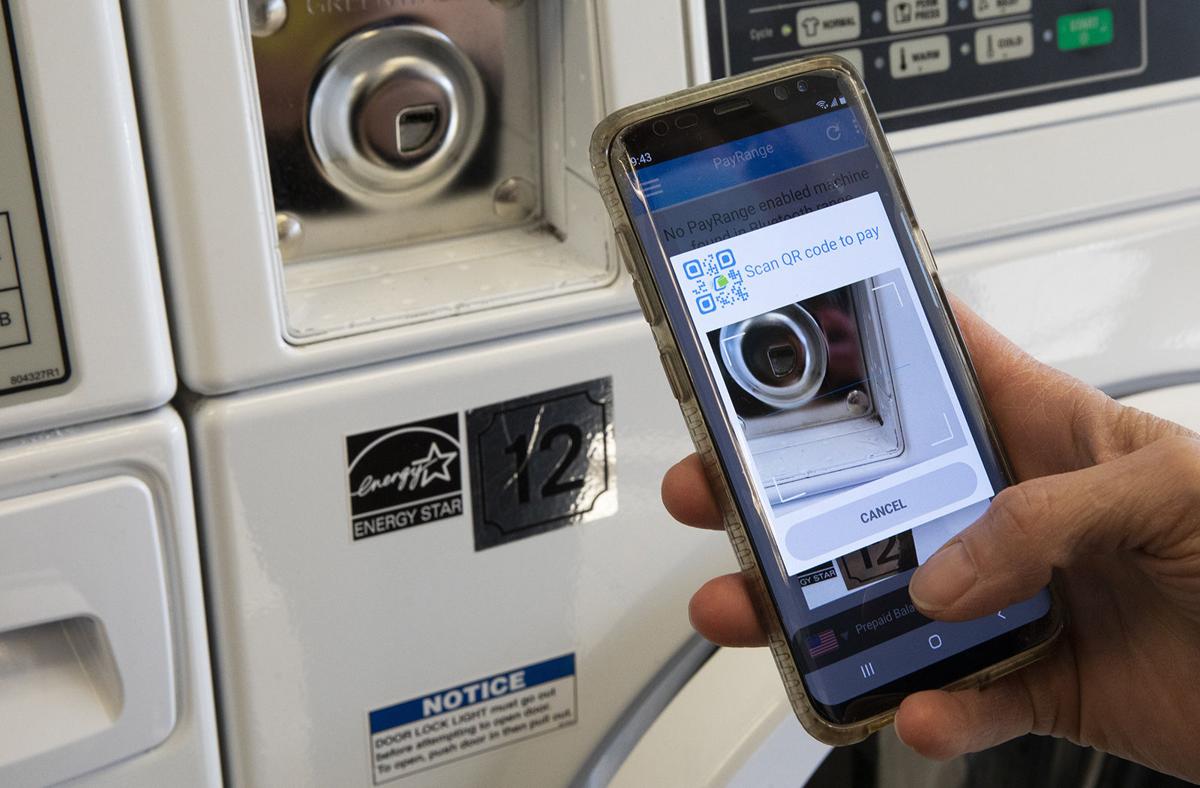 Heidi Thorsen, owner of Lunar Laundry in Seattle's Ballard neighborhood, holds her phone near one of her washing machines on Nov. 17 near where a QR code will soon be placed. In approximately two weeks, customers will be able to use a PayRange app to pay to operate the machines. [ELLEN M. BANNER/SEATTLE TIMES/TNS] 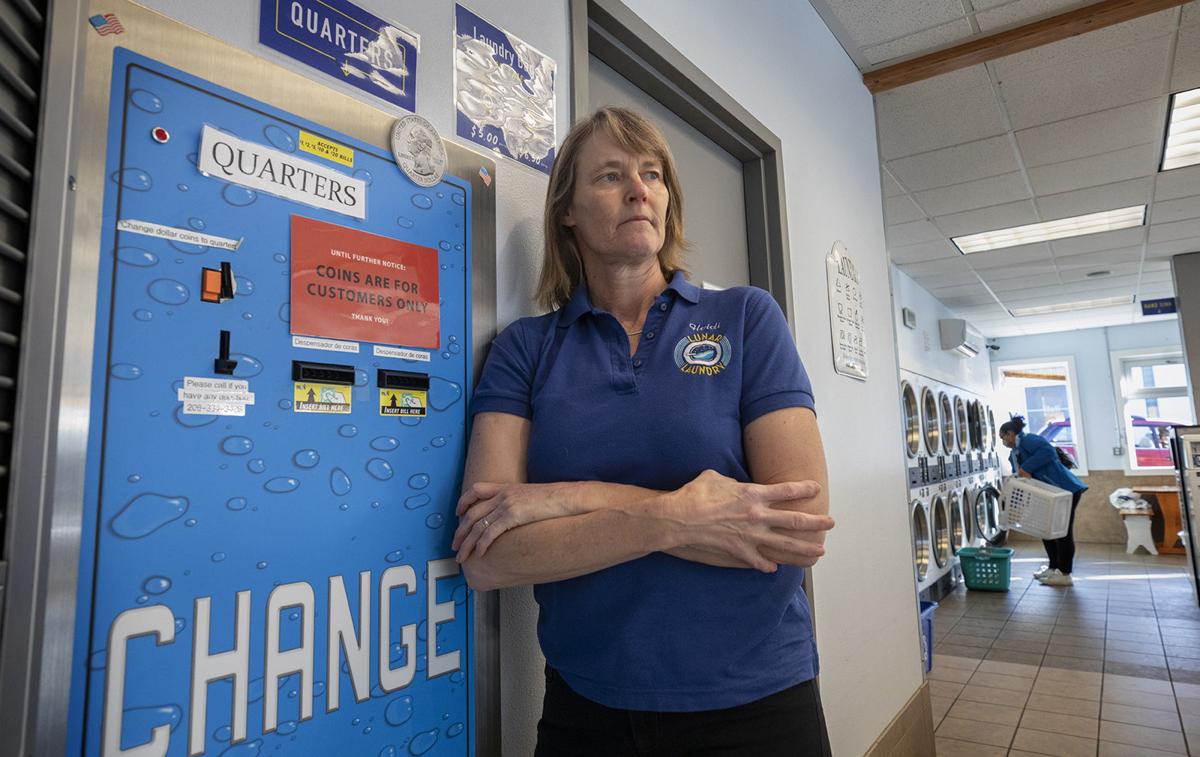 Heidi Thorsen, owner of Lunar Laundry in Seattle's Ballard neighborhood, is dealing with a shortage of quarters at her laundromat. [ELLEN M. BANNER/SEATTLE TIMES/TNS]

Heidi Thorsen, owner of Lunar Laundry in Seattle's Ballard neighborhood, holds her phone near one of her washing machines on Nov. 17 near where a QR code will soon be placed. In approximately two weeks, customers will be able to use a PayRange app to pay to operate the machines. [ELLEN M. BANNER/SEATTLE TIMES/TNS]

Heidi Thorsen, owner of Lunar Laundry in Seattle's Ballard neighborhood, is dealing with a shortage of quarters at her laundromat. [ELLEN M. BANNER/SEATTLE TIMES/TNS]

Seattle may style itself the capital of the information economy, but the "bits" that matter most to locals like Heidi Thorsen are the quarters she and her customers have had to scrounge for since the pandemic struck.

In the Before Times, Thorsen's Lunar Laundry, a coin-only laundromat in the Ballard neighborhood, was what's known as "quarter positive": Customers brought in so many of their own coins that Thorsen made twice monthly coin deposits at her bank.

But soon after pandemic restrictions hit last year, Thorsen noticed customers relying more often on her change machine. Then noncustomers — apartment tenants and even some small-business owners — began coming in and surreptitiously draining her change machine.

As Lunar went quarter negative, Thorsen went to her bank to replenish her coin supply. But the bank was so short on change, she could only buy a few $10, 40-quarter rolls, and most often there were none at all. "Where the heck are they going?" says Thorsen, who now spends considerable time moving her shrinking supply of quarters from her washers and dryers back to her change machine. "It's not like they disappeared."

Thorsen speaks for many in the local coin-operated economy, a diverse, somewhat old-school community of businesses and consumers that has been in a state of agitation since COVID-19 interrupted the normal cycle of coins.

"It's something I have to think about all the time," says Queen Anne resident Dan White, whose apartment has a coin-operated laundry. Early in the pandemic, White had to frantically group-text friends to secure enough quarters for a weekend's wash.

Another time, after White scored a precious stack from the change machine in a downtown bar, he was followed out and lectured by an employee. "He was like, 'I'll let it slide this time but you can never do that again,'" White says.

White is more systematic these days, periodically hitting a handful of businesses to get his rolls for the month. But the routine is time-consuming, with a furtiveness that often feels "weirdly like I was doing like a drug deal or something," he says. "People that aren't using quarters for a laundry machine have no idea that this is even happening."

Indeed, the Great Quarter Shortage has exposed another social and economic divide as a subset of consumers and businesses must scramble to replace what COVID has made scarce. The result is a kind of two-bit black market, rife with clever workarounds and conspiracy theories, and no small amount of social friction.

"It's really difficult," says Denise Eam, owner of PT Laundry in Kent, about having to ask noncustomers not to use her change machine. "Sometimes people are really nice and say 'sorry' (but) some of them are so nasty."

"They're worth more than 25 cents right now, that's for sure," adds Alex Singleterry. He runs a network of 83 arcade games at his Ballard tavern, the Ice Box Arcade, and elsewhere in the Seattle area and loses so many quarters to noncustomers that he routinely has to send out an employee to search for more. "We had to go to three banks today to get stocked up on coins for the weekend," he said Friday.

Technically, there is no quarter shortage, in Seattle or anywhere. The U.S. Mint produced nearly 24% more coins in 2020 than in 2019, despite a temporary pandemic slowdown, and continues to roll them out at "near record levels," according to Mint officials.

The problem, federal officials say, is many of the roughly 55 billion quarters estimated to be in circulation have been stranded by the pandemic in places — under your couch cushions, say, or in your console coin holder — where the coin-operated economy can't touch them. It's a smaller, less visible version of the supply chain crisis, but with quarters instead of cargo containers.

Early in the pandemic, many consumers and businesses stopped using physical currency out of safety concerns. Overall cash purchases in 2020 dropped nearly 27% compared with 2019, while the rate at which coins and bills change hands fell more than 70% — the steepest drop on record — and hasn't recovered, Federal Reserve data show.

As coins accumulated in homes and handbags, retailers that were typically quarter-negative even before COVID went even further in the red and made even more frequent coin purchases from banks.

Consumers, meanwhile, were also less frequently hauling in their caches of spare change to banks or coin kiosks.

As the circulation of coins slowed, and as the reopening economy led banks to order more coins from the Federal Reserve, the country's central bank saw its own coin inventory fall below normal levels. In June 2020, the Reserve imposed a "temporary" restriction on coin orders by private banks that, despite a brief reprieve this year, remains in effect. Some banks restricted their own coin sales, even to big retail customers — and many still do.

The bank is "shorting us on our order a lot," says Dave Garcia, assistant store director at Ballard Market, which, like many retailers, has suspended its own quarter sales to consumers.

Brandon Whitehead, another Seattle apartment dweller plagued by a coin-operated laundry, says his bank rarely has quarters now and local retailers are either out or limit sales to a few dollars worth. "So that's enough for, like, one load of wash."

The scarcity is more than just an inconvenience, government and industry officials say. It can mean real hardship for lower-income people, who may lack access to debit cards or other digital payment systems. Likewise for small-business owners who depend on those "unbanked" customers, and who themselves can't afford to upgrade to digital payments and the touchless economy.

More than half of U.S. self-service laundromats are still coin-only, and their customer base is more likely to be "unbanked and underbanked" than "just about any other business you might think of," says Brian Wallace, president and CEO of the Coin Laundry Association.

Solving the quarter crisis has become a top priority of the Federal Reserve, where a specially empaneled U.S. Coin Task Force is working to persuade Americans to spend those quarters and other coins back into circulation.

Yet despite an exceedingly earnest "Get Coin Moving" campaign, with public service announcements, a social media hashtag and a YouTube video, the task force reckons that a too-large chunk of the $48.5 billion worth of coins in circulation is still "sitting dormant inside America's 128 million households."

Out on the streets of the coin-operated world, that imbalance has manifested as a kind of coinage roller coaster, with jubilant periods when banks and stores seemingly have rolls aplenty, followed by renewed tightening and anxiety.

At a Seattle Safeway, a clerk said the store typically had only five rolls to sell a day and recommended coming in the morning. A clerk at a Seattle Fred Meyer said the shortage was "not a thing anymore" but declined to sell this reporter more than one roll.

As with much of the pandemic, the coin drought has produced its own internal narrative, complete with conspiracy theories. One theory in circulation is that government was prolonging the shortage to encourage a shift to digital payments so "they can track all the data and know exactly what you're buying," the Ice Box's Singleterry says.

A laundromat worker speculated that coin kiosk company executives were hoarding supplies so they could search them for rare coins.

But the long coin drought has also generated extraordinary innovation and adaptation, especially as coin-operated businesses and their customers resign themselves to a situation that could last at least as long as the pandemic.

Some quarter-dependent consumers have mapped out which banks have extra rolls, or which grocery store managers will cut loose a few rolls at closing time.

Quarter-negative businesses, meanwhile, often have nurtured alliances with coin-positive peers, such as carwashes and vending machine operators. Wallace, the laundry association president, says some business owners have exploited the shortage's regional differences by driving hours away to buy quarters from colleagues.

Thorsen, after months of desperation, struck a deal to buy coins from a local quarter-positive business owner whose identity she guards like a trade secret. She's also going partly digital with a new Bluetooth-based system that lets customers scan a QR code on a washer or dryer and pay through their phones.

No need to 'knock heads'

For now, some coin-only businesses are taking defensive measures. Many post "customers only" signs on their change machines. Others have set their change machines to reject $20 bills or now fill them only partly to minimize losses from a big-spending noncustomer. Wallace has even seen laundromats install a kill switch so if noncustomers try "to make change, they just cut the power to the machine."

The defensive measures have resulted in unpleasant interactions on occasion, but also new forms of decorum.

Early in the pandemic, preventing noncustomers from using the change machine could get "confrontational at times," says Melissa Delaney, a laundry attendant at Crystal Clean in Capitol Hill. But eventually, Delaney says, she and her noncustomers settled into a more graceful routine: They would claim to be doing their laundry there before walking out, which meant "I could do my job and they could get what they needed, and we didn't have to sit there and knock heads," Delaney says.

Thorsen and Singleterry have also tried to stay low-key and humane about noncustomers who come for their coins.

The coin shortage "is bigger than a couple of business owners" buying her quarters, says Thorsen.

"It's a pain in the butt, but it's not a big deal," Singleterry adds. With the enormous number of coins running through his machines — around 40,000 at any given time — losing a few more to noncustomers is far from his biggest pandemic challenge.

"And at the end of the day," he says, "our job is to turn quarters into dollars and put dollars in the bank."

Loyalty to family, instead of CNN, puts Chris Cuomo at risk