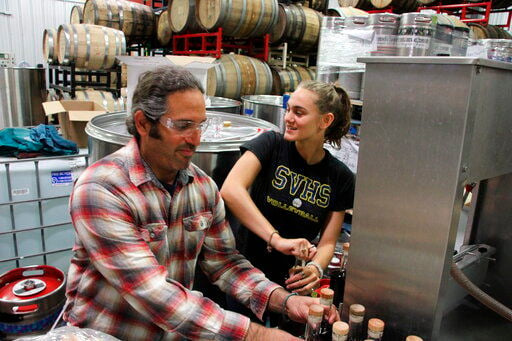 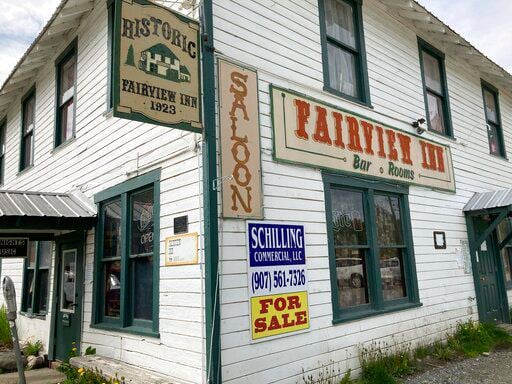 This June 2 photo shows a "For Sale" sign at the Fairview Inn in Talkeetna, Alaska. Tourism is one of the main drivers of the Alaska economy, which means some businesses are suffering during the pandemic. [AP PHOTO/MARK THIESSEN, FILE]

This June 2 photo shows a "For Sale" sign at the Fairview Inn in Talkeetna, Alaska. Tourism is one of the main drivers of the Alaska economy, which means some businesses are suffering during the pandemic. [AP PHOTO/MARK THIESSEN, FILE]

TALKEETNA, Alaska — In one quirky Alaska town, small sightseeing planes sit idle, the grand fireplace is dark at the usually bustling lodge, and the general store is stocked with ice cream for tourists who are nowhere to be seen.

By late May, Main Street should be jammed with meandering tourists slurping ice cream cones and stopping at gift shops alongside original cabins built in this community of about 800. But the coronavirus has upended everything.

Communities across Alaska are feeling the financial squeeze, from cruise ship ports where major lines have canceled summer sailings, to Talkeetna, which bills itself as the Gateway to Denali and where the ship passengers arrive on buses for inland excursions. Nearly half of the state's 2.2. million annual visitors usually arrive on those vessels.

Salvador, vice president and general manager of the Alaska Collection by Pursuit, which includes the Talkeetna Alaskan Lodge, estimates a decline in business of 75%, and staffing will be less than half of last year.

One resident recalls this is what the town looked like before tourism became the driving economic force. “This is a peek back into the ’80s of Talkeetna,” said Serena Berkowitz. “People are going to lose money. It’s going to be a bad, bad summer.”

Along with oil and fishing, tourism is a pillar of Alaska’s economy, accounting for about $2.8 billion in director visitor spending, according to a state-commissioned 2017 report. One of 10 jobs result from the tourism industry, it said.

Many Talkeetna businesses, and employees, make their yearly salary between May and September.

“March and April is our point of lowest cash flow,” said Sassan Mossanen, the founding partner of Denali Brewing Co., which is located off the main highway between Anchorage and Fairbanks. It also operates a brewpub restaurant on Talkeetna’s Main Street.

By April, most businesses have made it six months with little or negative cash flow. That's when the coronavirus pandemic took hold, this year as events began being canceled.

Denali's climbing season had already been called off, meaning hundreds of climbers who descend on Talkeetna before making their way to base camp didn’t arrive. By May, all of the larger cruise ship companies had postponed or fully canceled their season.

The brewery switched gears and made sanitizer to help buffer the downturn, but a handful of people were still laid off.

The businesses that make most of their money over the summer may not be able to build up cash reserves to make it through the winter.

Talkeetna has long been rumored to be the inspiration for the town of Cicely, Alaska, on the 1990s TV show “Northern Exposure.”

“Normally when we are talking about summer business, we have an influx of people,” said Berkowitz, a full-time clerk at Nagley’s General Store, where the resident cat was the town's mayor until dying a few years ago. “It is a situation to where we will see bus after bus after bus, day in and day out.”

In a normal year, Berkowitz bounces between two registers almost nonstop when she's not scooping ice cream and making espressos. “I found myself having gaps where I’m not really doing something or I have to go find something to do, which is weird for this sort of time of year,” she said.

Retailers hope state residents will pick up the slack.

“This is the Alaskan summer for Alaskans to actually see their state,” said Salvador. The lodge began opening on weekends to accommodate in-state travelers. The state also has provided testing options so out-of-state travelers can avoid a 14-day quarantine if the results are negative, and the lodge plans to open daily.

Joe McAneney, the founder of The High Expedition Co., a downtown Talkeetna marijuana store, said out-of-town Alaskans have been visiting and spending money.

He said on Memorial Day, he took in 85% of his highest record sales, and sold as much in apparel as he did in cannabis.

Cruise ship passengers can’t take marijuana products back to hotels or on the ships with them so if they purchase anything in the store, it’s in very small amounts and maybe a T-shirt, McAneney said.

But he's seeing state residents purchasing larger amounts of cannabis. While he may have fewer transactions, people are spending more per transaction.

“It’s Alaskans recreating with Alaskans and they’re very eager to support Alaska small businesses,” he said. “And I know you not only are you seeing it at the cash register, but you’re hearing them talk about it.”

Donna Knight of Wasilla drove with friends to Talkeetna to have lunch at one specific restaurant, but was disappointed to find it was closed. They ate elsewhere and then went shopping.

Her summer plans were to visit Alaska communities, to help out local businesses, but began to have second thoughts after the number of coronavirus cases began to spike. “I’m nervous,” she said.

Alaska was one of the first states to allow businesses to reopen and lifted stay-at-home restrictions in May. Even though cases are trending upward again, the state still has relatively few, with 755 cases involving residents as of Sunday, and 12 deaths.

“The worst thing I think that could happen for tourism for us right now is to have a second wave come through and have to shut down again," Salvador said, “because that would really, really cripple the tourism economy here, not only for this season, but you can also see for seasons, you know, further on."

READER CONTRIBUTION: Move to Decatur linked with family's past