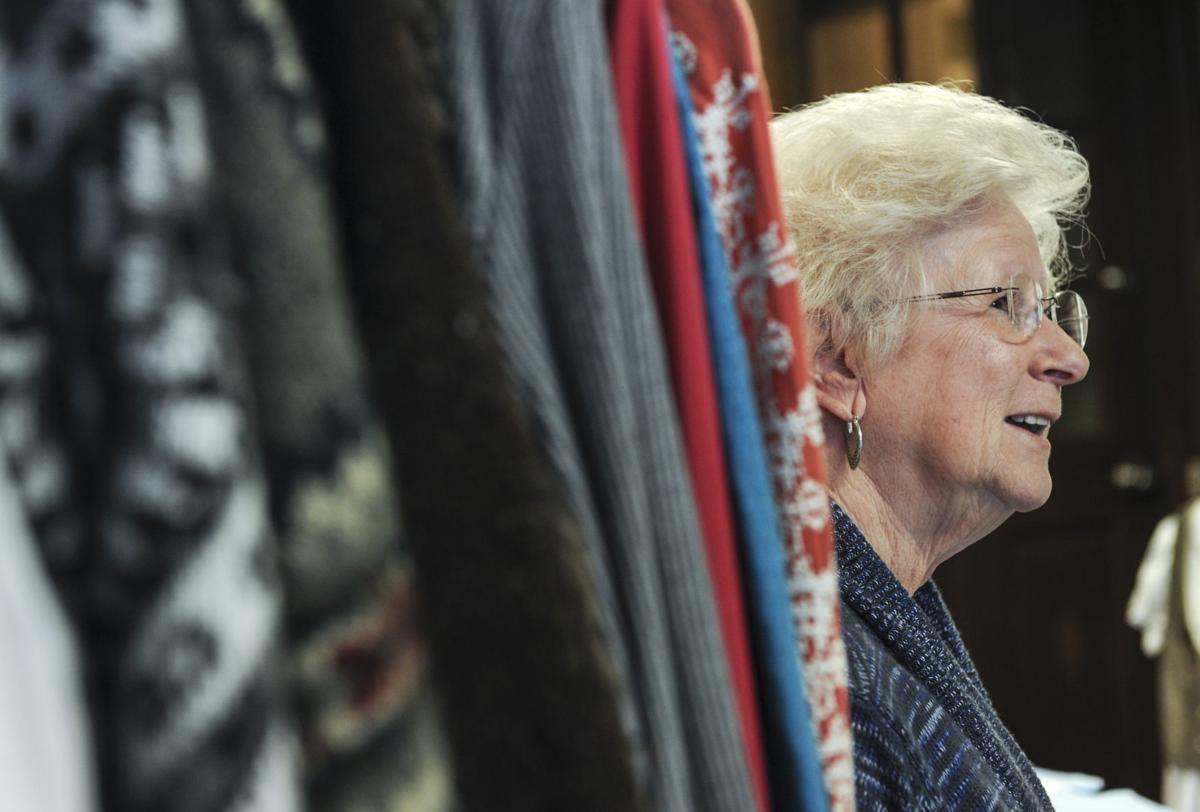 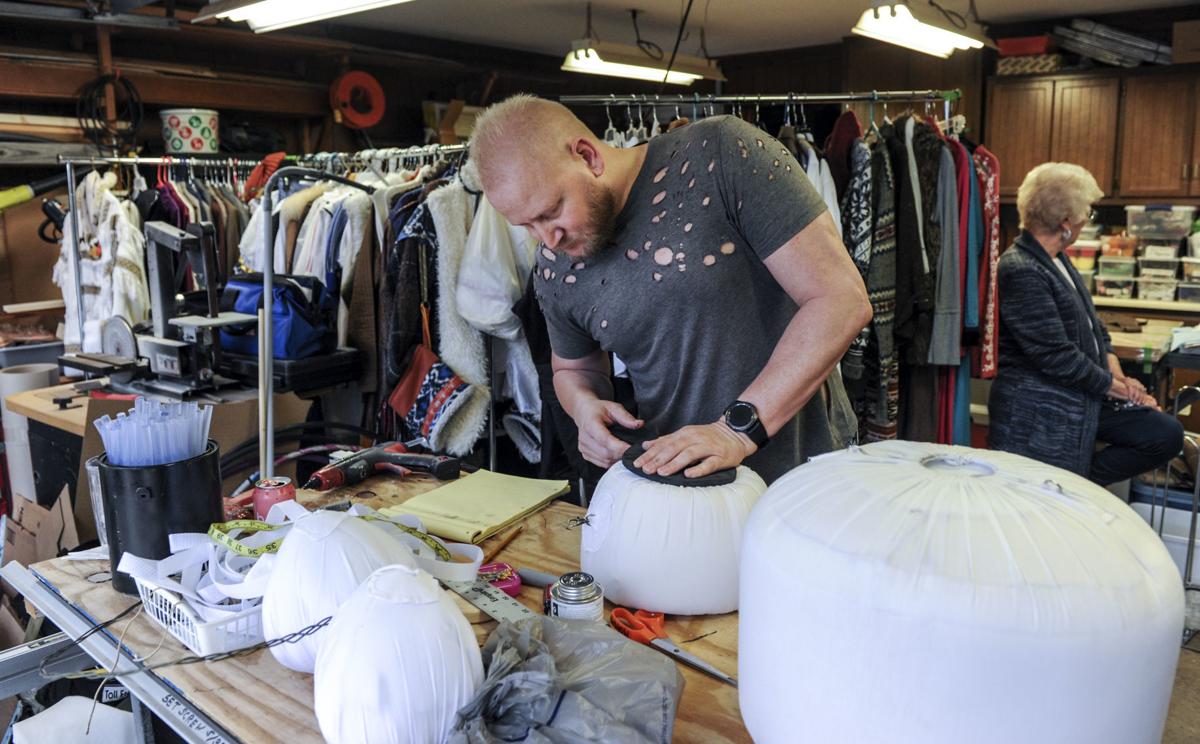 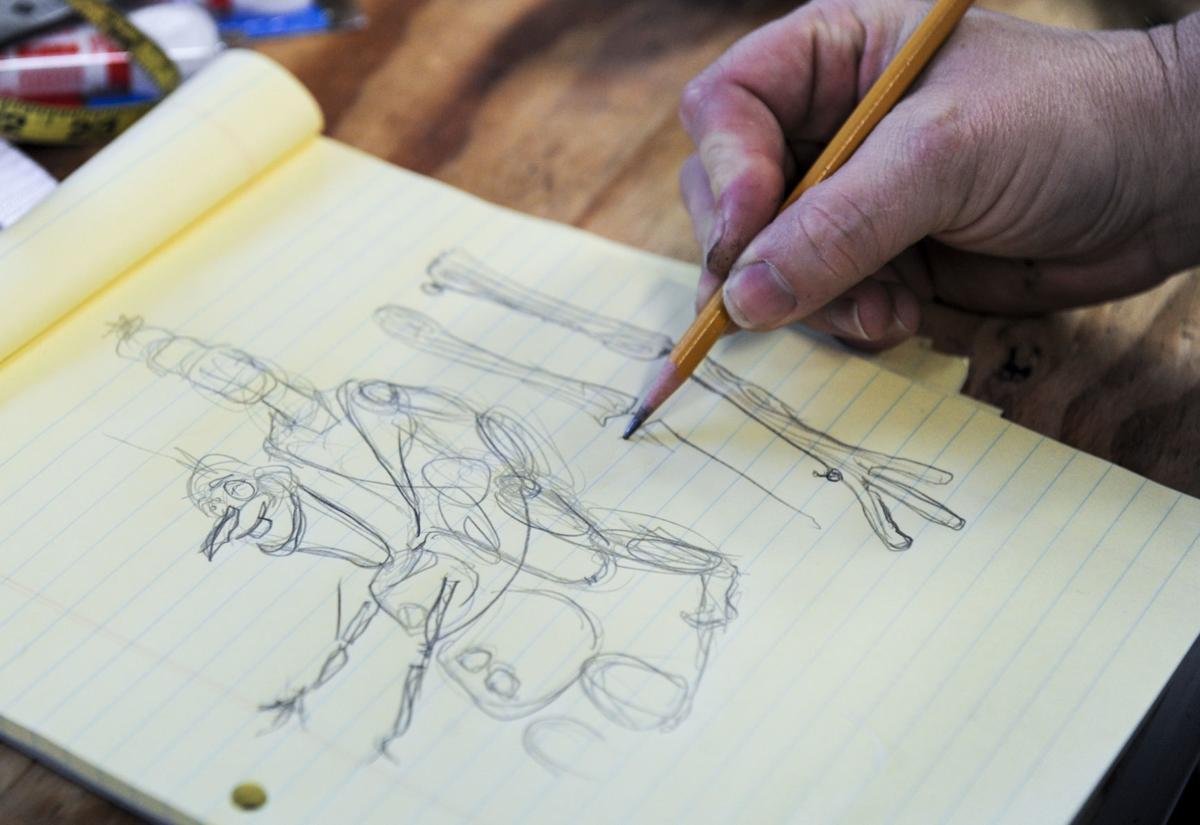 Michael Wilson Morgan works on the design of the talking snowman puppet and the costume for its puppeteer. [JERONIMO NISA/DECATUR DAILY] 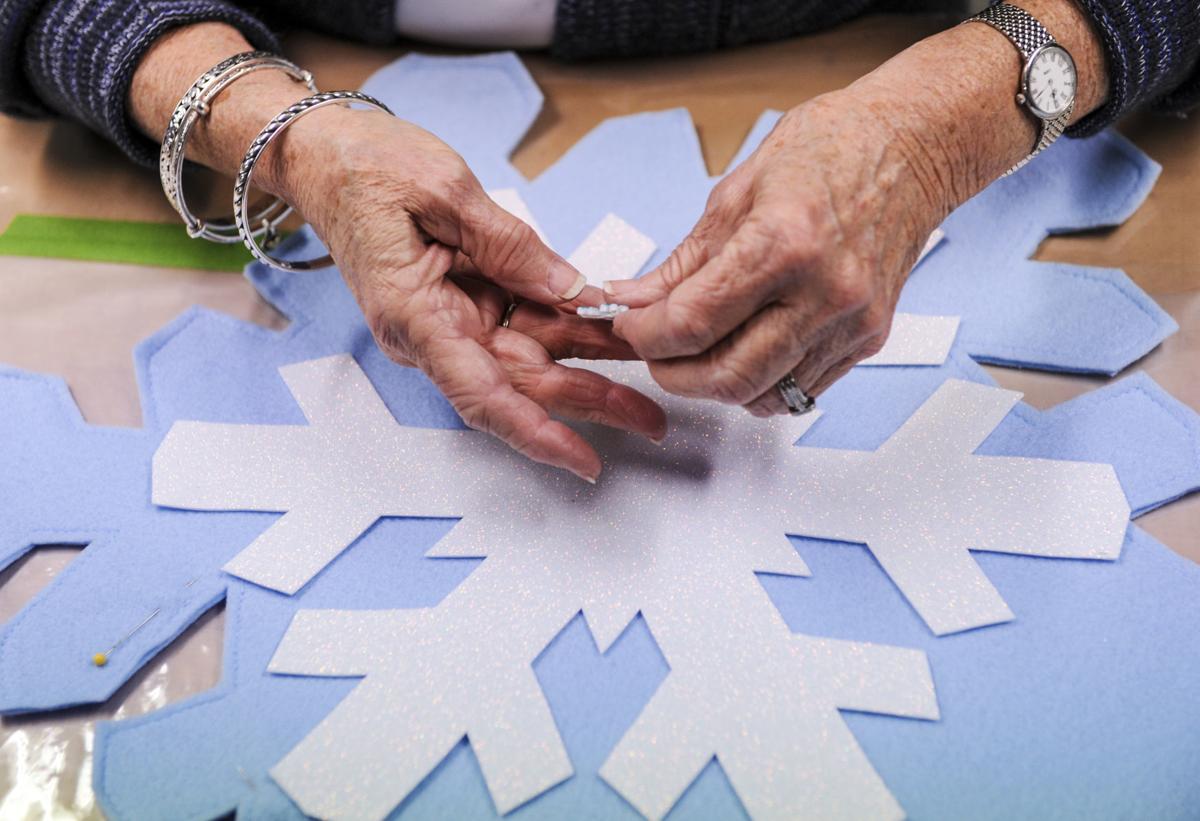 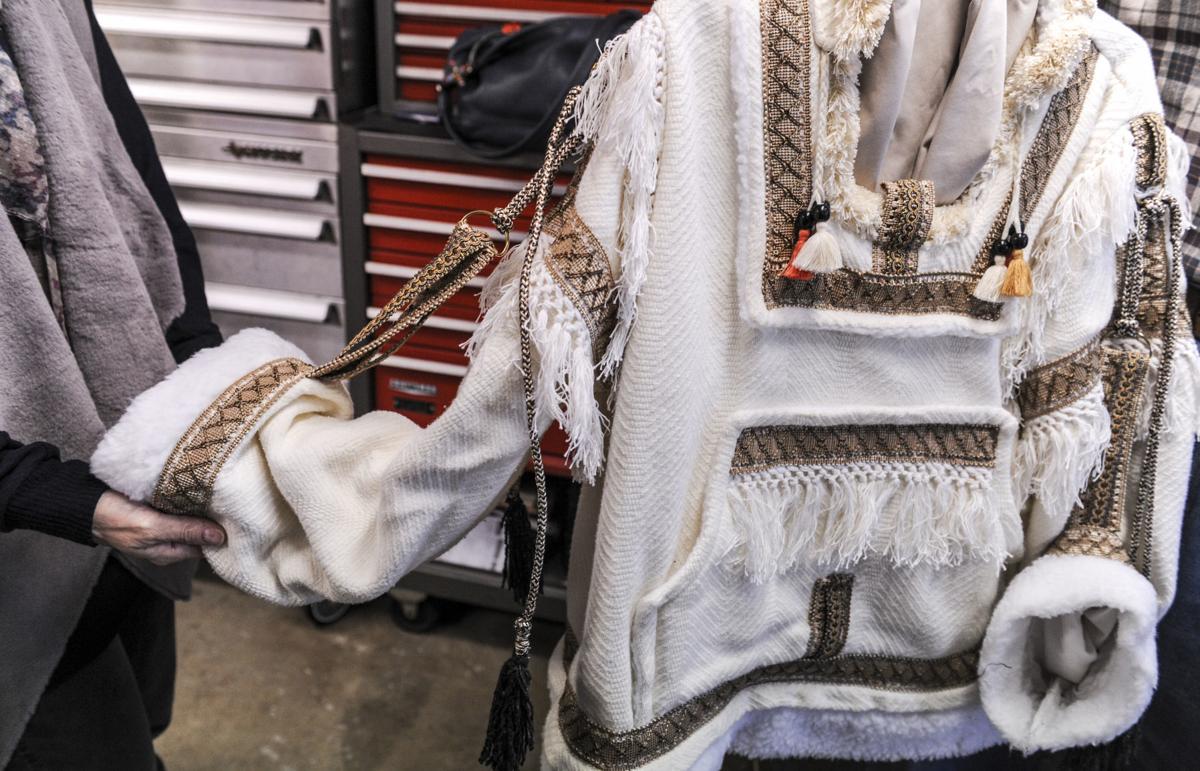 Paulette Morgan and her son, Michael, created this costume out of a blanket. [JERONIMO NISA/DECATUR DAILY]

Michael Wilson Morgan works on the design of the talking snowman puppet and the costume for its puppeteer. [JERONIMO NISA/DECATUR DAILY]

Paulette Morgan and her son, Michael, created this costume out of a blanket. [JERONIMO NISA/DECATUR DAILY]

Racks of costume pieces, stacks of fabric and cords of rope filled the two-car garage — or what would house two cars if not for the more than 100 wardrobes in various stages of completion.

“Here it is,” the bespectacled, white-haired woman said excitedly, pointing to an image of a snowman on her cellphone. “We are going to make puppets and matching costumes for the actors playing the snowman and the moose. These characters are so well known, we definitely want to get them right.”

Using her tools — a sewing machine, serger and hot glue gun — Morgan, as the head — and many times only — costume designer, has designed and made outfits for Bank Street Players, Dream Weavers Children’s Theatre and Morgan County Schools drama group.

From now until the opening day of Dream Weaver’s “Frozen Jr.” on Feb. 14, Morgan’s life will revolve creating 160 costumes for the 124-member cast.

“We will spend every waking minute making costumes,” Morgan said. “Really, we live it. Hugh and I do not eat at the dining room table because that’s where the sewing machines and the sergers are. You have to have a love for it.”

For “Frozen Jr.,” a shortened version of the popular Disney musical “Frozen” for actors 18 and younger, Morgan reached out to her son, Michael Wilson Morgan, a freelance artist, designer and actor, who spurred his parents’ involvement in community theater.

“The arts have been part of our lives since we met. We would go to movies, plays and concerts, which I always slept through, but enjoyed,” Paulette Morgan said. “We went from being in the audience to participating when Michael got bit by the acting bug. Being the parents we are, if he was at the theater, we were at the theater. We thought, if this is going to be his life, then it needs to be our life too.”

With the resurgence of community theater in Decatur, which began in 2012 with the reformation of Bank Street Players and continued in 2017 with the reorganization of Dream Weavers, Hugh and Paulette Morgan volunteered their — and their son’s — talent and time.

“When Bank Street announced they were going to do ‘Shrek’ in 2014, we arranged for Michael, who had just designed costumes for ‘Shrek’ in Michigan, to drive to Michigan from New York, where he lives, to pick up the costumes he had made and bring them here and alter them with Paulette’s help. That was the beginning,” Hugh Morgan said.

In the past five years, Paulette Morgan has designed and created costumes for “Oklahoma,” “Fiddler on the Roof,” “The Miracle Worker” and “Much Ado About Nothing” for Bank Street Players, “Oklahoma” and “Bye Bye Birdie” for Morgan County Schools and “Charlotte’s Web,” “Rapunzel,” “The Wizard of Oz” and “The Little Mermaid” with co-designer Lana Barnett for Dream Weavers.

“When Michael came down for ‘Shrek,’ I thought, ‘Yes, I want to do this here in Decatur,’ ” Paulette Morgan said. “When I really got hooked, though, was when Michael designed costumes for Leon Sheffield’s ‘Lion King Jr.’ in 2016. Those kids made me feel younger — tired, but younger. I enjoyed it so much. We were empty-nesters by then and being around those kids made us feel young.”

“I loved working with the teenagers in the Morgan County School shows and seeing their progress,” Paulette Morgan said. “With Dream Weavers I work with a lot of itty-bitty people. I really love it because they get so excited and a lot get bit by the bug like Michael did. They want to be in every production. It’s a lot of fun.”

To create costumes for “Frozen Jr.,” Paulette and Michael Wilson Morgan, who spent Christmas in Decatur, scoured thrift stores and discount shops. They walked up and down every aisle and grabbed a white blanket for Olaf the snowman, a brown curtain for Sven the moose, gauze for fur, and rope for fringe and reins.

That creativity and resourcefulness makes the Morgans unique.

“What I love about them is they go thrifting and they can take stuff I see and don’t think anything about and create amazing pieces,” said Thompson, who is director of “Frozen Jr.” “We are all creative in our own ways, but this is on a different level. It is a blessing to have them. It’s like a director’s paradise.”

In designing and creating the costumes, both Paulette Morgan and Michael Wilson Morgan, who graduated from Decatur High and Savannah College of Art and Design, are using skills they learned as children.

Paulette Morgan started sewing at 12 years old after asking for and receiving a sewing machine for Christmas.

“I started sewing when I was 12. I had received a sewing machine for Christmas,” Paulette Morgan said. “I made all my own clothes and my Barbie doll, you would not believe her wardrobe. When my sons, Chris and Michael, got old enough I taught them how to cook and sew. I thought it was important that boys learned those things.”

As a child, Michael Wilson Morgan sewed felt figures of Batman and other popular superheroes and cartoons. At college, after toying with the idea of becoming an animator for Disney, he found his future in theater and his aptitude for hot glue gunning.

“Give me 20 bucks, a cardboard box and a hot glue gun and I’ll give you anything you want. The running joke is I have a degree in hot glue gun,” said Michael Wilson Morgan, who, while working on Olaf the snowman, had two hot glue guns plugged in and three bags of hot glue gun sticks. “I like to take what other designers have done and make it my own because we don’t have $14 trillion, we have $14.”

With “Frozen Jr.” being so new — Disney Theatrical Productions released rights for the show in January 2019 — few examples existed for the Morgans to use as references.

“I’m very visual, so when we start a new show, I go to the internet and, even though Susan says, ‘Don’t watch the movie, Paulette,’ I watch the movie,” Paulette Morgan said. “Sometimes, I hate to say this, but I take other people’s ideas and go with it and I’m OK with that. For this show, not many people have done it before. On top of that we are making a talking snowman and moose.”

Instead of dressing the actors as a snowman and a moose, the Morgans decided to create puppets the actors will control.

One of the highlights of the process for Michael Wilson Morgan comes when fitting the actors in their costumes.

“When the actor tries on the costume for the first time and you see them come to life and really find that character, that’s an awesome feeling. That’s the rush for me,” Michael Wilson Morgan said.

For Paulette Morgan, that moment arrives when the curtain rises opening night.

“You have to have a deep love for the performing arts to do this. We will spend hundreds of hours creating these costumes, but it’s all worth it the night the curtain goes up. That’s the payback right there for me. I always cry like a baby opening night,” Paulette Morgan said.

The Morgans’ latest creations will be on display during performances of “Frozen Jr.” at the Princess Theatre on Feb. 14-16.