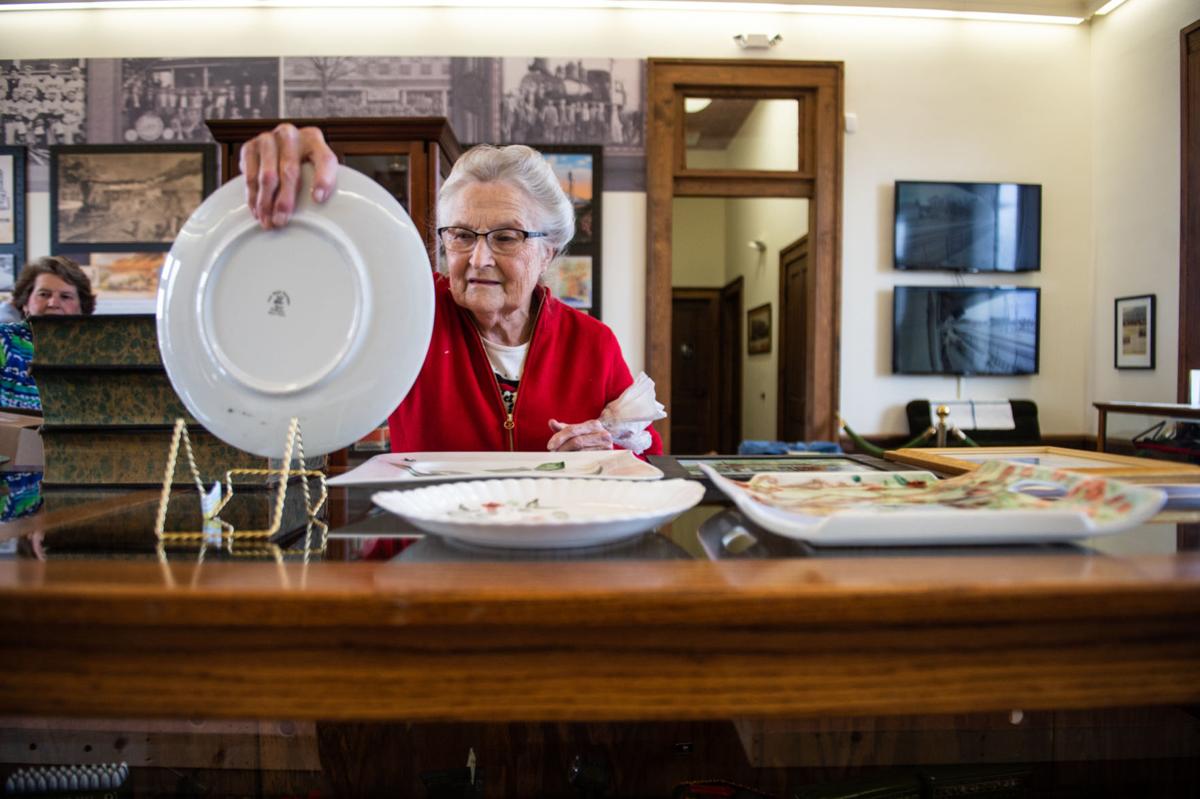 Betty Moore places a piece of porcelain art for the exhibit that highlights the history, culture and landscape of the city and the state. [DAN BUSEY/DECATUR DAILY] 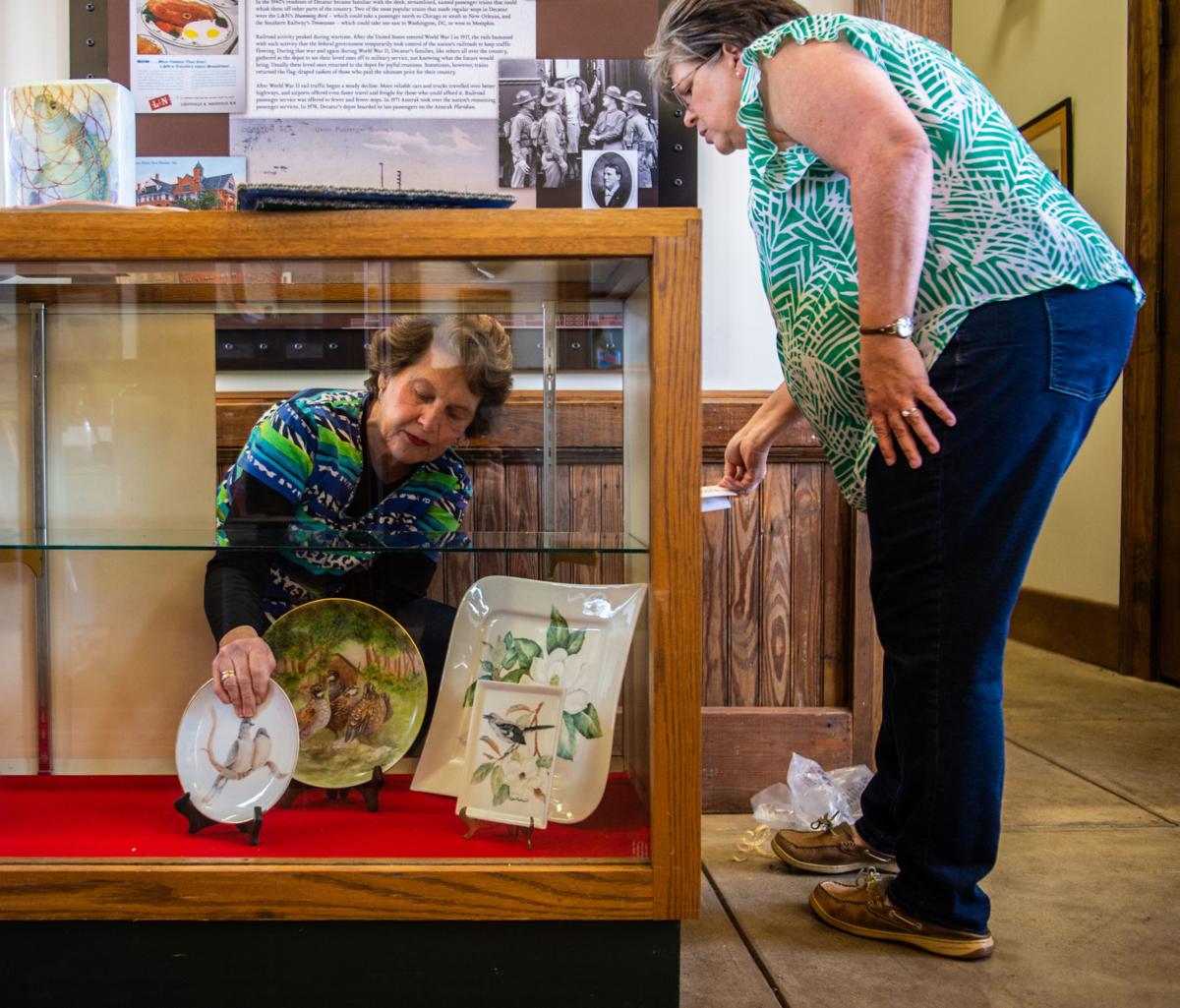 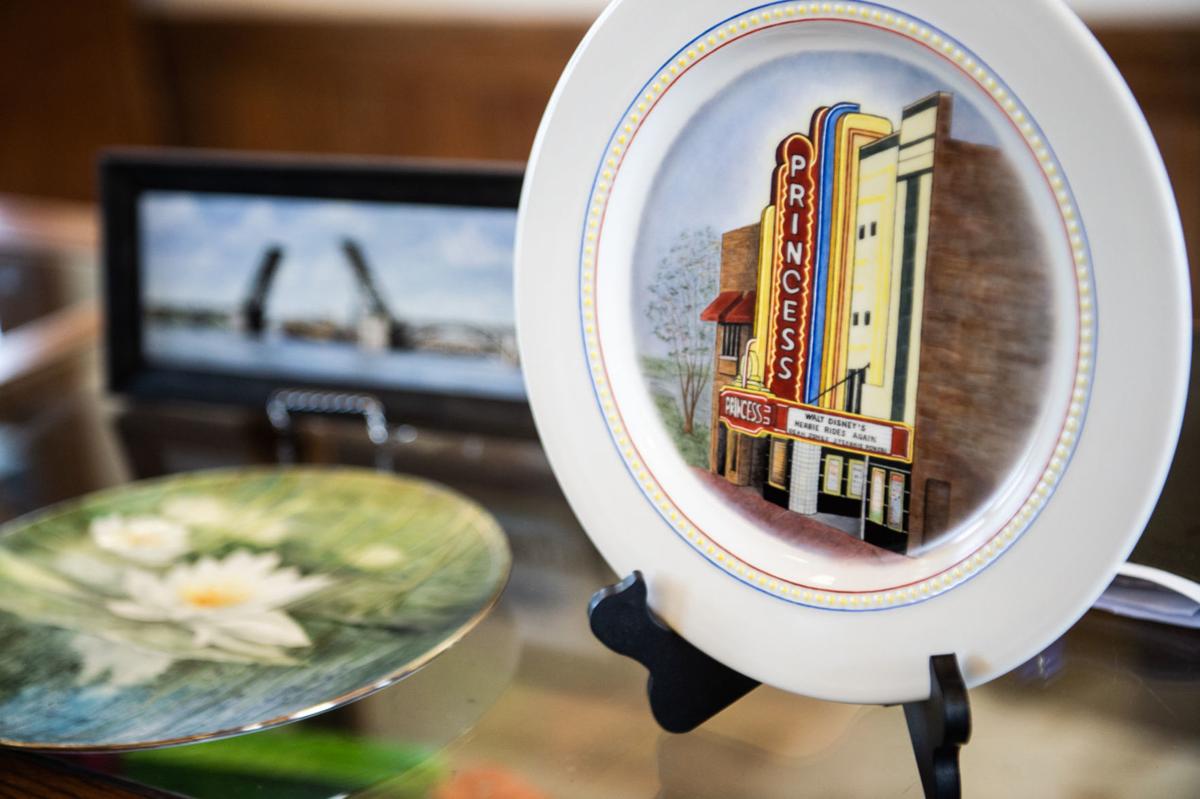 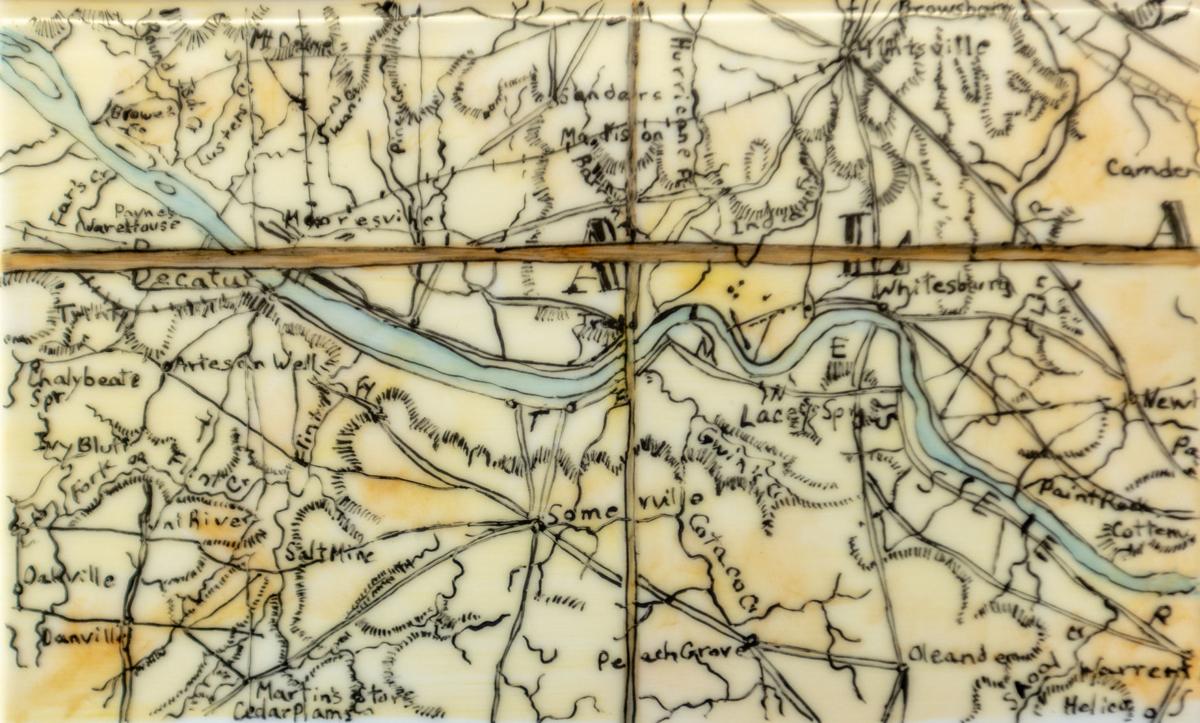 A porcelain art piece depicts a portion of a map General William Tecumseh Sherman carried during the Union Army's March to the Sea. [DAN BUSEY/DECATUR DAILY] 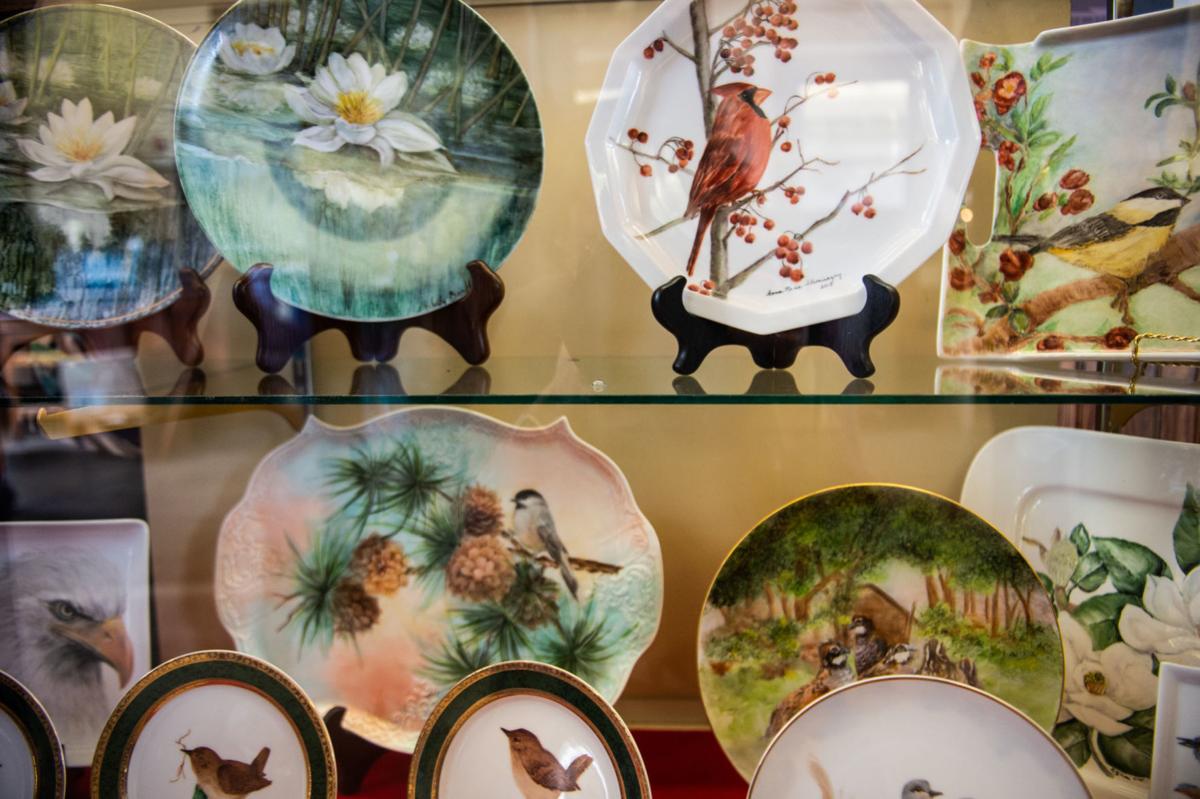 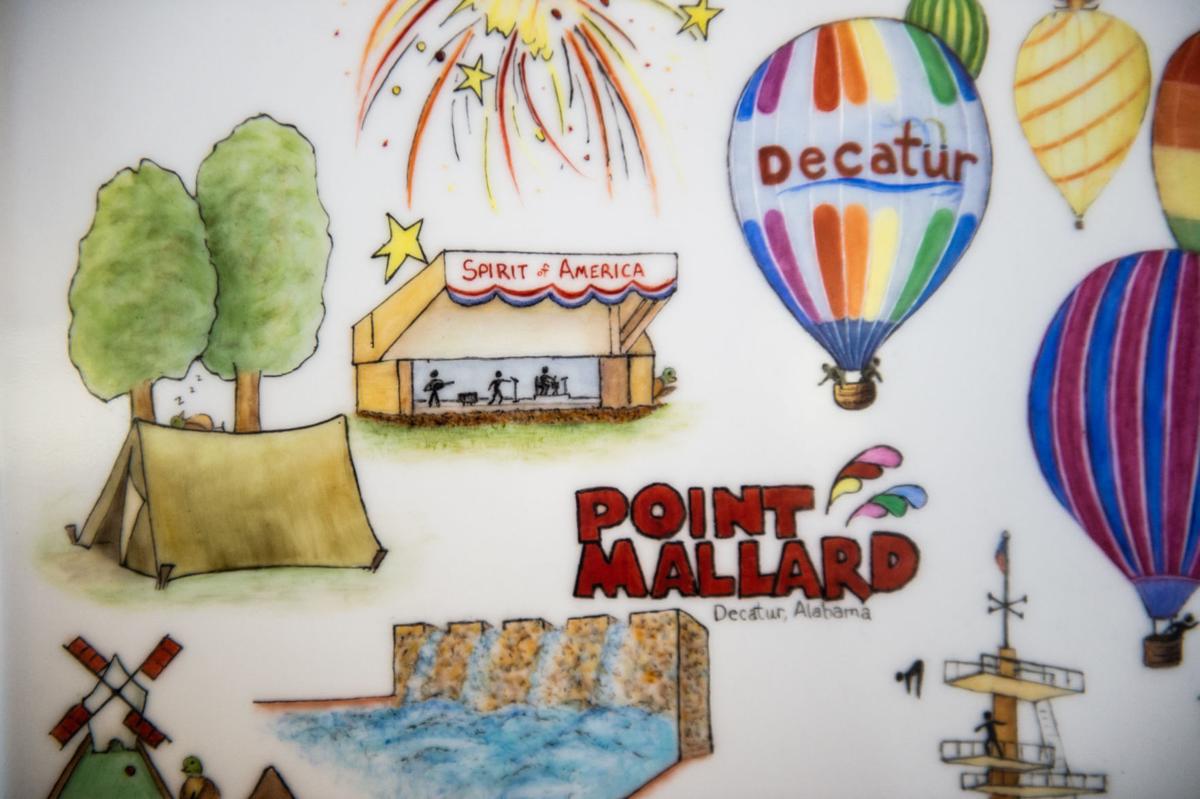 A piece of porcelain art depicts Point Mallard Park with many of its features. [DAN BUSEY/DECATUR DAILY]

Betty Moore places a piece of porcelain art for the exhibit that highlights the history, culture and landscape of the city and the state. [DAN BUSEY/DECATUR DAILY]

A porcelain art piece depicts a portion of a map General William Tecumseh Sherman carried during the Union Army's March to the Sea. [DAN BUSEY/DECATUR DAILY]

A piece of porcelain art depicts Point Mallard Park with many of its features. [DAN BUSEY/DECATUR DAILY]

Created by area porcelain artists, the pieces currently on display at the Historic Decatur Railroad Depot highlight the history, culture and landscape of the city and the state.

“That’s our state bird, the yellowhammer. And that’s one of the brick kilns behind Ingalls Pavilion that belonged to the Alabama Brick and Tile Co.,” said David Breland as the artists revealed the pieces covered in images, from cotton bolls and whooping cranes to the Princess Theatre and the Keller Memorial Drawbridge.

The exhibit, which will remain on display to May and then move to the Decatur Public Library, celebrates the city’s bicentennial, which Decatur will mark in 2020 — the anniversary of when the settlement of Rhodes Ferry’s name changed to Decatur. Other celebrations will take place in 2024, the anniversary of when leaders established a town plan to become a city, and in 2026, 200 years since Decatur was officially incorporated.

“We love any excuse for a party,” Breland, the city’s director of historic resources and events, said with a laugh.

Each piece of artwork evokes memories of Decatur.

There is the hummingbird feeding at trumpet vines, a plant found at Wheeler National Wildlife Refuge. There is the tribute to Point Mallard with images of hot-air balloons, a tent, the wave pool and fireworks. And there is the Civil War map depicting area landmarks.

“It took a lot of research to find that map, but thankfully I’m a Civil War buff and really enjoyed the search. I kept drilling and drilling and drilling until I finally found one that showed Decatur. That’s actually a painting of a portion of the map that General (William Tecumseh) Sherman would have carried during the March to the Sea,” Skonieczny said.

For the exhibit, Anita Russell painted the Princess Theatre, complete with “Herbie Rides Again” on the marquee.

“That was the one I went to see when I was little,” said Russell, who started painting on porcelain as a way to spend time with her mother, whose pieces, including a plate depicting Ed’s Grocery, also are on display at the depot.

“I loved Ed’s store,” Breland said. “I ate a lot of bologna sandwiches there. It actually used to be an old police hangout.”

During the exhibit, members of Decatur Porcelain Artists will hold demonstrations of the art technique. The free demonstrations on Jan. 25, Feb. 8, 15 and 22, and March 21 will begin at 10 a.m. at the depot, 701 Railroad St. N.W.

“The demonstrations are amazing and all of these pieces are lovingly done,” Breland said. “This is one interesting hobby and one I didn’t know much about before last year.”

Each of the artists’ introductions to the unique hobby came via different avenues.

Skonieczny signed up for a class 20 years ago after seeing a display of porcelain art at a ceramic shop. Anderson first saw porcelain artwork at her neighbor’s house in Kentucky and started painting in Decatur after reading an article about local artist Carol Watt. Betty Moore learned of the hobby after a fellow employee at the Wallace Center, where she worked as a registered nurse, brought in some of her pieces.

“I never did any art before this. I told Carol (Watt), who taught classes, that I couldn’t even draw a straight line. She said, ‘It’s OK, you don’t have to,’ ” Moore said.

To create the pieces, the artists use mineral paints mixed with oils and fire the items in a kiln at least three times and up to 15 times. Each firing takes between 45 minutes and 3 hours depending on the kiln. The multiple firings allow the artists to create dozens of colors.

“I love porcelain art because the paint is translucent and you can come up with colors that you can create in no other medium. You can just put layer upon layer of different colors on the pieces,” Skonieczny said.

Other art exhibits exploring the area’s history are on display at the Alabama Center for the Arts on Second Avenue Northeast, the Carnegie Visual Arts Center on Church Street Northeast and the Morgan County Archives on Bank Street Northeast.

In the Alabama Center for the Arts’ main gallery, photographs by Glenn Wills hang on the walls. The “Forgotten Alabama” exhibit features images of abandoned and neglected places from across the state. The exhibit includes Decatur’s railroad depot before its renovation and a dilapidated barn in Morgan County. A free lunch and learn with Wills will take place at the center on Tuesday, noon-1 p.m.

At the Carnegie’s “Artifact: Vision,” photographs by Crystal Vander Weit and sculptures by Spencer Nolen Laws spotlight the nature and people of north Alabama. The exhibit will remain on display through Feb. 1. Open Tuesday to Friday, 10 a.m. to 5 p.m., and Saturday, 10 a.m. to 2 p.m.

An exhibit on George Washington Carver, who was born a slave and became a botanist and inventor, will be on display at the Morgan County Archives through February. Carver, who taught at Tuskegee Institute, visited Decatur’s Carver Elementary School in 1935. Open Tuesday to Friday, 8 a.m. to 4:30 p.m.