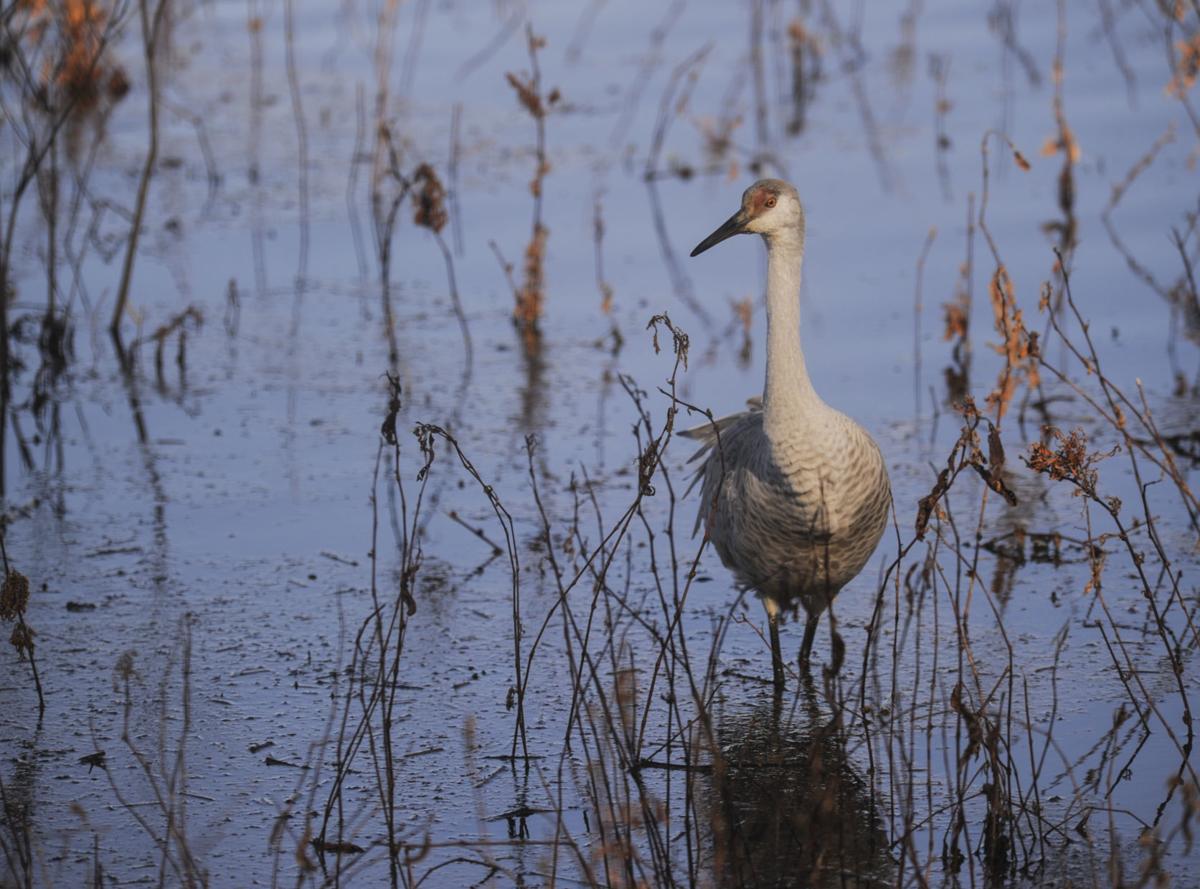 One of the more than 10,000 sandhill cranes at Wheeler National Wildlife Refuge forages for food in the water. Festival of the Cranes will celebrate the sandhill cranes and endangered whooping cranes that winter at Wheeler. [JERONIMO NISA/DECATUR DAILY] 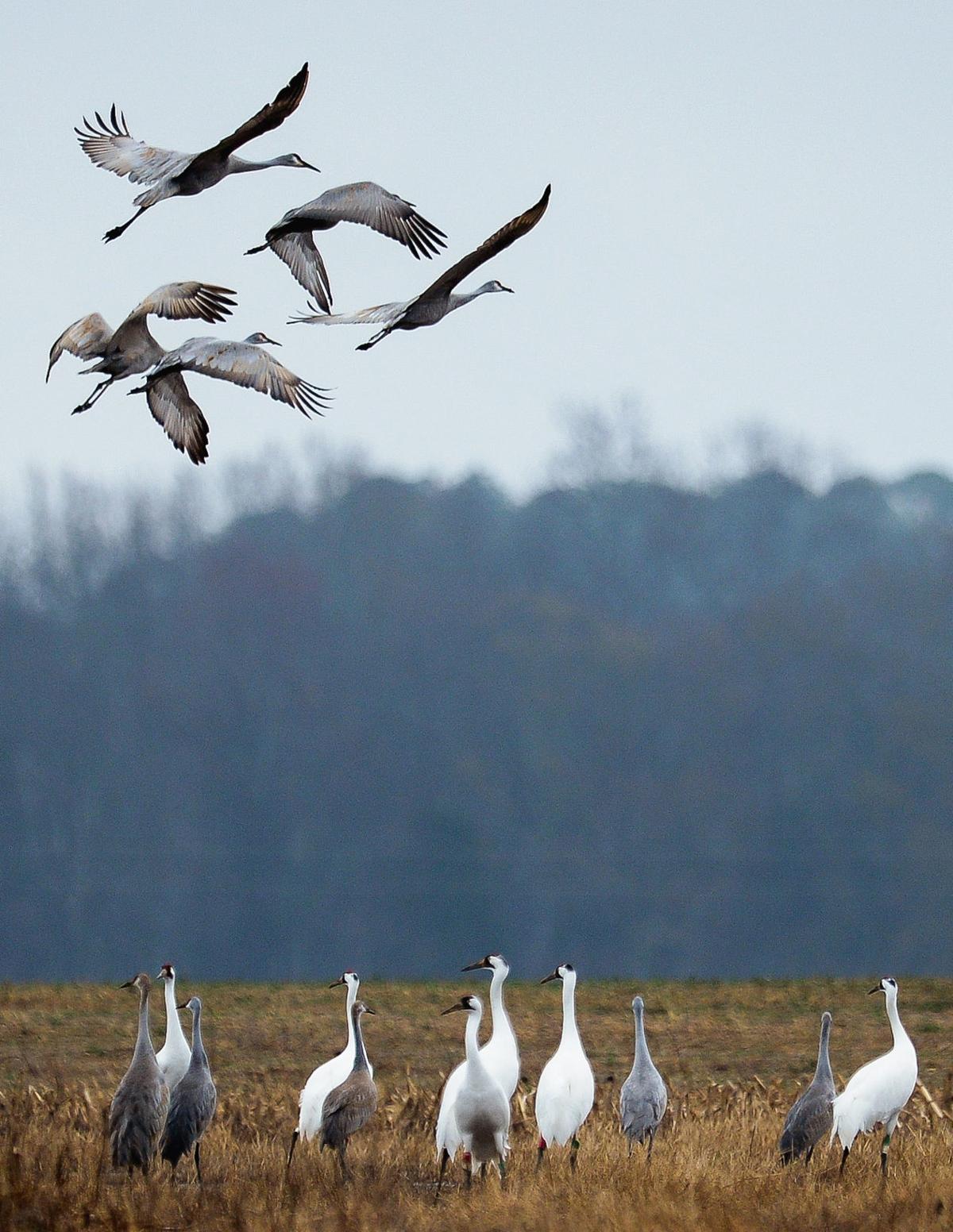 Festival of the Cranes will celebrate the more than 10,000 sandhill cranes and the 17 whooping cranes at Wheeler National Wildlife Refuge. The endangered whooping cranes started wintering in north Alabama in 2004. [DECATUR DAILY FILE] 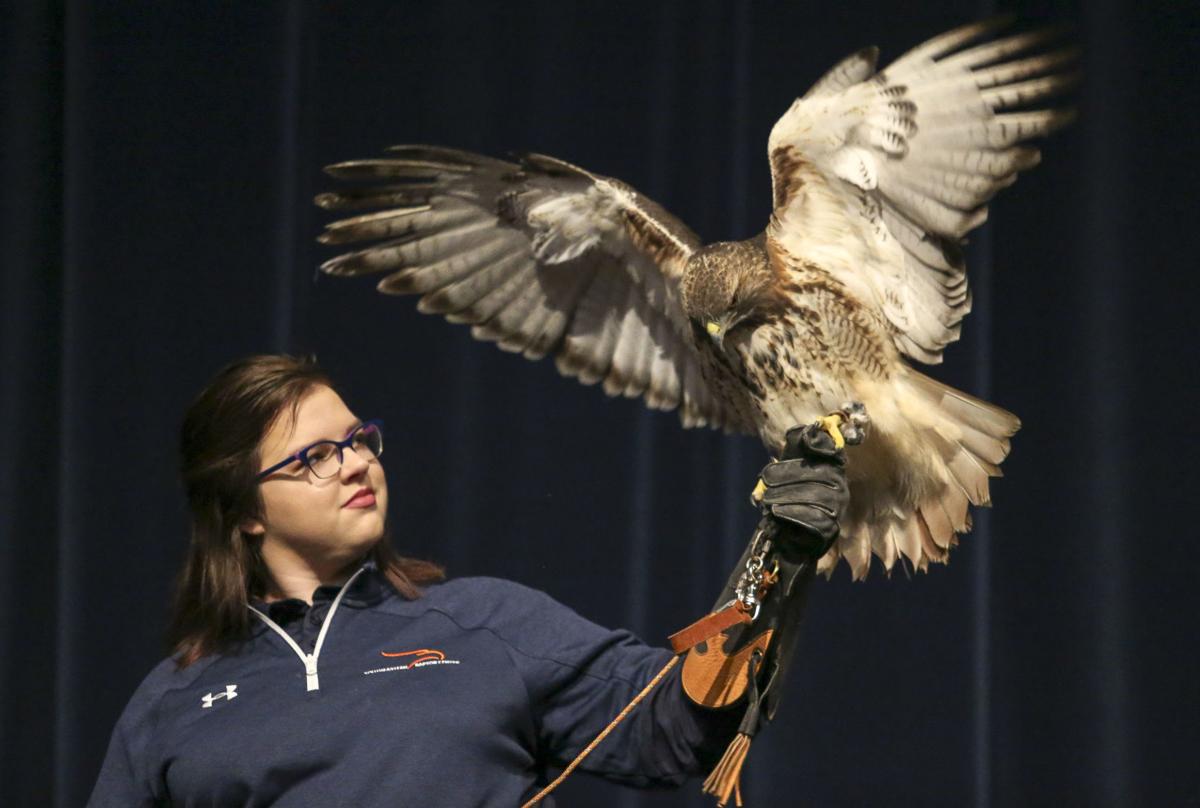 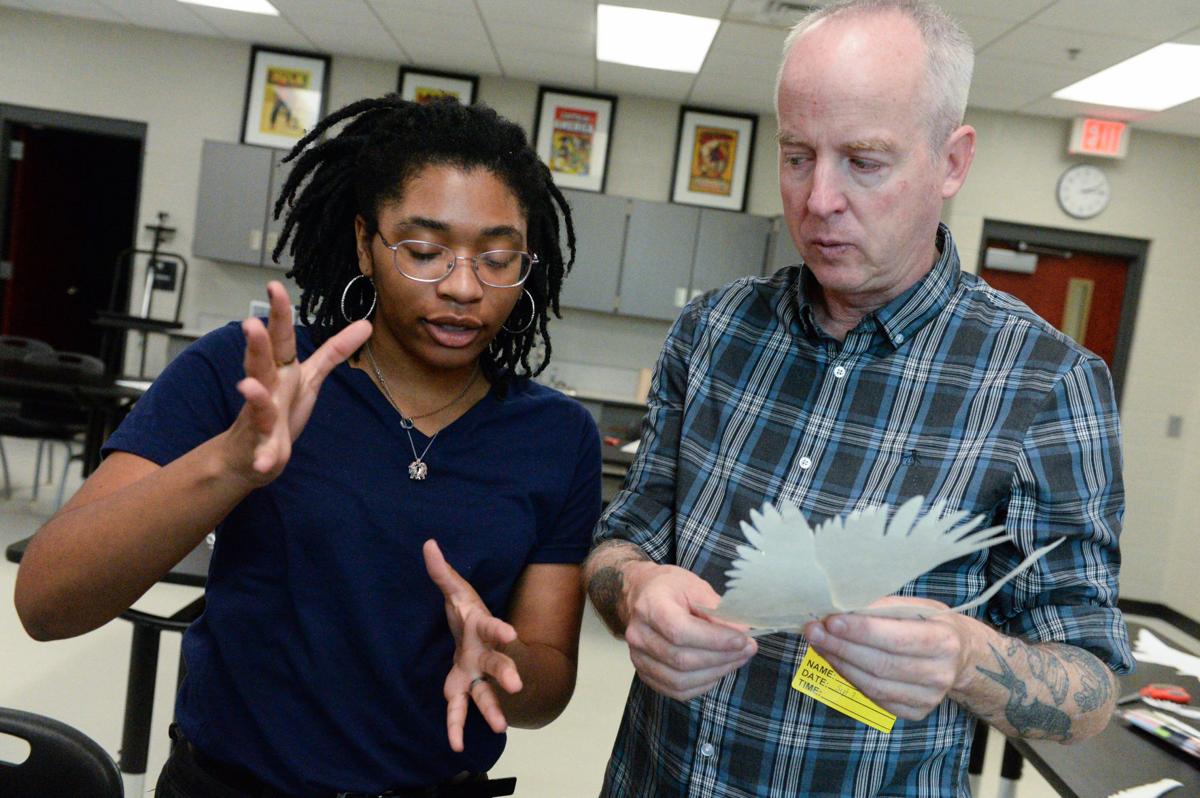 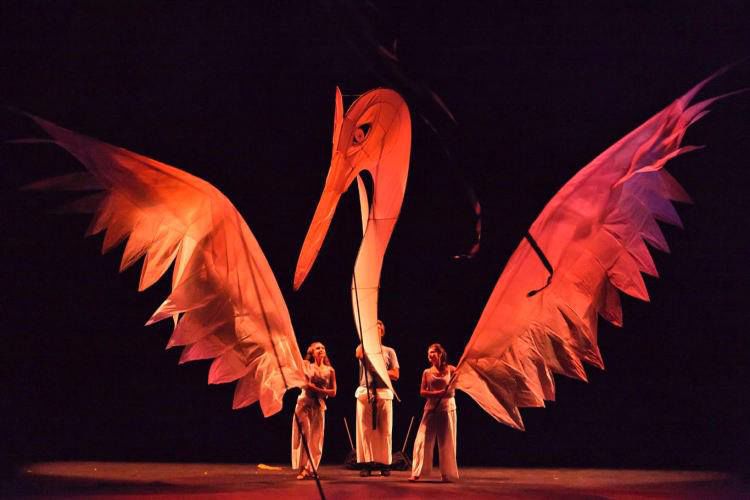 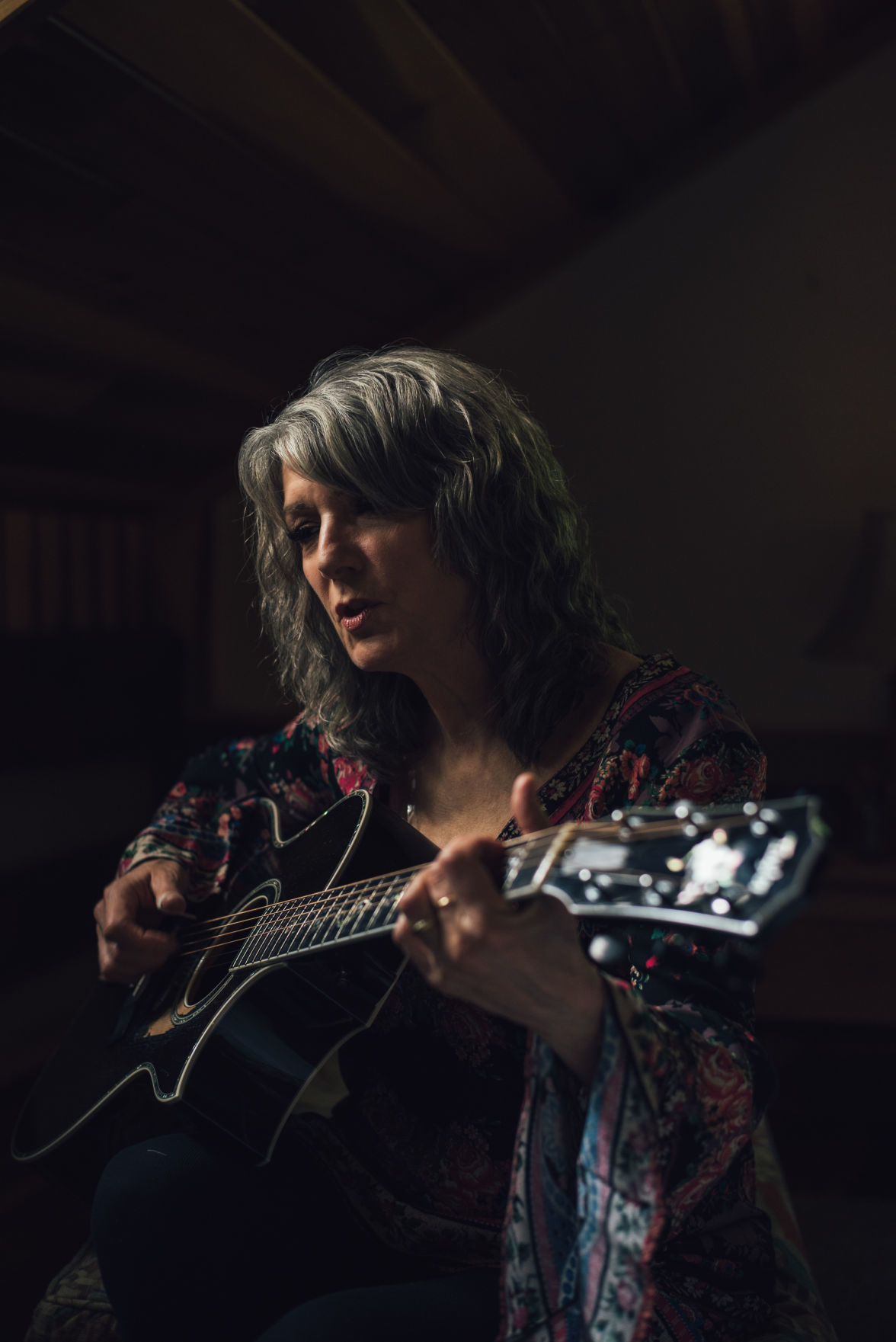 Grammy Award winner Kathy Mattea will perform at the Princess Theatre during Festival of the Cranes on Friday. [COURTESY PHOTO/RETO STERCHI]

One of the more than 10,000 sandhill cranes at Wheeler National Wildlife Refuge forages for food in the water. Festival of the Cranes will celebrate the sandhill cranes and endangered whooping cranes that winter at Wheeler. [JERONIMO NISA/DECATUR DAILY]

Festival of the Cranes will celebrate the more than 10,000 sandhill cranes and the 17 whooping cranes at Wheeler National Wildlife Refuge. The endangered whooping cranes started wintering in north Alabama in 2004. [DECATUR DAILY FILE]

Grammy Award winner Kathy Mattea will perform at the Princess Theatre during Festival of the Cranes on Friday. [COURTESY PHOTO/RETO STERCHI]

Thousands of sandhill cranes blanketed the fields, barren farmlands and ponds of Wheeler National Wildlife Refuge this past week. Their calls echoed through the crisp winter morning — a beacon to bird watchers and nature lovers.

Among the sea of 10,000 sandhill cranes, 17 whooping cranes, rare white birds with black-tipped wings and red caps, are wintering at the north Alabama protected lands.

“Nowhere else in the country can you walk 200 yards to a heated building with scopes and view the tallest and one of the most endangered birds in north America,” Teresa Adams, supervisory park ranger at Wheeler, said of the refuge visitor center's observation building. “This truly is a special place and a special experience.”

To celebrate and spotlight the birds, local conservancy groups organized the Festival of the Cranes, which will kick off Thursday and feature a Grammy Award-winning musician, storytellers, photography workshops, an interactive puppet experience by Jim Henson’s daughter and art exhibits.

The festival, which started seven years ago as a one-day event and attracted 900 visitors, has grown into a four-day event with 5,000 attendees from across the country and programs at the Princess Theatre, Carnegie Visual Arts Center, Alabama Center for the Arts and Old State Bank.

“The whooping cranes are what make this festival special," Adams said. "They are one of the most endangered birds. We are so lucky around here. It is such a rare opportunity to be able to see these birds."

The whoopers, a term used by avid bird watchers who refer to themselves as “Craniacs,” first appeared in north Alabama in 2004 to the surprise of researchers. Biologists planned for the whooping cranes, which numbered 15 in 1941, to winter in Florida with its salt marshes and blue crabs — a habitat and diet similar to that of whoopers that winter at Aransas National Wildlife Refuge in Texas.

Some whooping cranes, however, never completed the journey to Florida.

With 17 birds currently on site, Wheeler is home to one of the largest wintering congregations of whooping cranes in the Eastern Flyway. Of the more than 800 whooping cranes in existence today, about 85 birds migrate along the United States’ Eastern Flyway, going from Wisconsin, Michigan, Iowa and Illinois to Florida, Tennessee, Kentucky, Indiana and Alabama.

Among the birds lured into Wheeler is a whooping crane from Louisiana — one of Adams’ favorites. She calls her the “Louisiana Bird.”

“She’s part of a non-migratory population. They’re not supposed to migrate, but she is a traveler. They are able to track her through a GPS unit. She has had the most interesting travels, she’s been up to Arkansas and ping-ponged around. I think she’s great. She’s like, ‘Hey, I know I’m not supposed to migrate, but I’m going to,’ ” Adams said of the bird, who is spending her second winter in north Alabama.

Adams pointed to “Old Bird” as another notable winter resident of Wheeler. Hatched in 2002, “Old Bird,” who is now with his third mate, is the last of the whooping crane flock that first wintered at Wheeler.

As “Louisiana Bird,” “Old Bird” and the 15 other whooping cranes migrated to north Alabama in November, so did A.J. Binney. An outreach program assistant with the International Crane Foundation, Binney, originally from Indiana, worked to educate the public about the endangered birds. He talked of how the 5-foot tall birds are the tallest in North America, how biologists dress up as whooping cranes to care for the chicks and about the efforts to save the birds from the brink of extinction.

“No matter who you are, if you are a serious birder or a child, these birds are amazing. That the birds are 5 feet tall and only weigh 6.8 kilograms (about 15 pounds) blows the minds of the kids. Serious birders like to hear about the intensive work that has gone into rearing and parenting the birds,” Binney said.

Since his arrival at Wheeler, Binney has spotted 14 whooping cranes from the observation building. On Monday, Binney will lead a “Crazy about those Cranes” program at the Decatur Public Library, 504 Cherry St. N.E. The program will begin at noon.

“We have had a stellar few weeks," Adams said. "Our numbers always increase during the holidays, but nothing like this. The day after Christmas we had 610 people here, that Friday we had 515 and that Saturday we had 667. I don’t know if we’ve ever had that many people at the center on one day that wasn’t during the festival. It’s exciting to see more and more people learn about this amazing place.”

Outside of the Wheeler National Wildlife Refuge, special events during Festival of the Cranes include a concert by Grammy Award winner Kathy Mattea, an interactive puppet show by Heather Henson and presentations by Auburn University’s Southeastern Raptor Center at the Princess Theatre, an art show by high school students at the Old State Bank, a screening of “America’s Amazon” at the Alabama Center for the arts and an arts workshop at the Carnegie Visual Arts Center.

Organizers recommend visitors park downtown and take the shuttle from the Princess Theatre to the refuge. Once the spaces at the Wheeler are filled, cars will be stopped at the refuge’s entrance gate. Buses will run every 15 to 20 minutes. An all-day pass costs $2.

When: Saturday and Sunday with special events taking place Thursday and Friday

Parking: Park in downtown Decatur. A shuttle will run from the Princess Theatre to Wheeler National Wildlife Refuge from 7:30 a.m. to 4 p.m. Cost is $2 for unlimited trips.

Schedule: All events will take place at the refuge unless noted otherwise.

• Photography workshop with Paul Bannick, author of “Owl: A Year in the Lives of North American Owls,” 9 a.m. Free.

• Art workshop with Doug Baulos at the Carnegie Visual Arts Center, 9-11:30 a.m. and 12:30-3 p.m. Learn about crane furoshiki, natural dyes, eco-printing and more. Free, but class size is limited to 12. Reserve a spot at admin@carnegiearts.org.

• Auburn University’s Southeastern Raptor Center at the Princess Theatre, 11 a.m. and 1:30 p.m. Free. Get an up-close view of hawks, owls, falcons and eagles.

Should the Senate call witnesses in the impeachment trial of President Donald Trump?