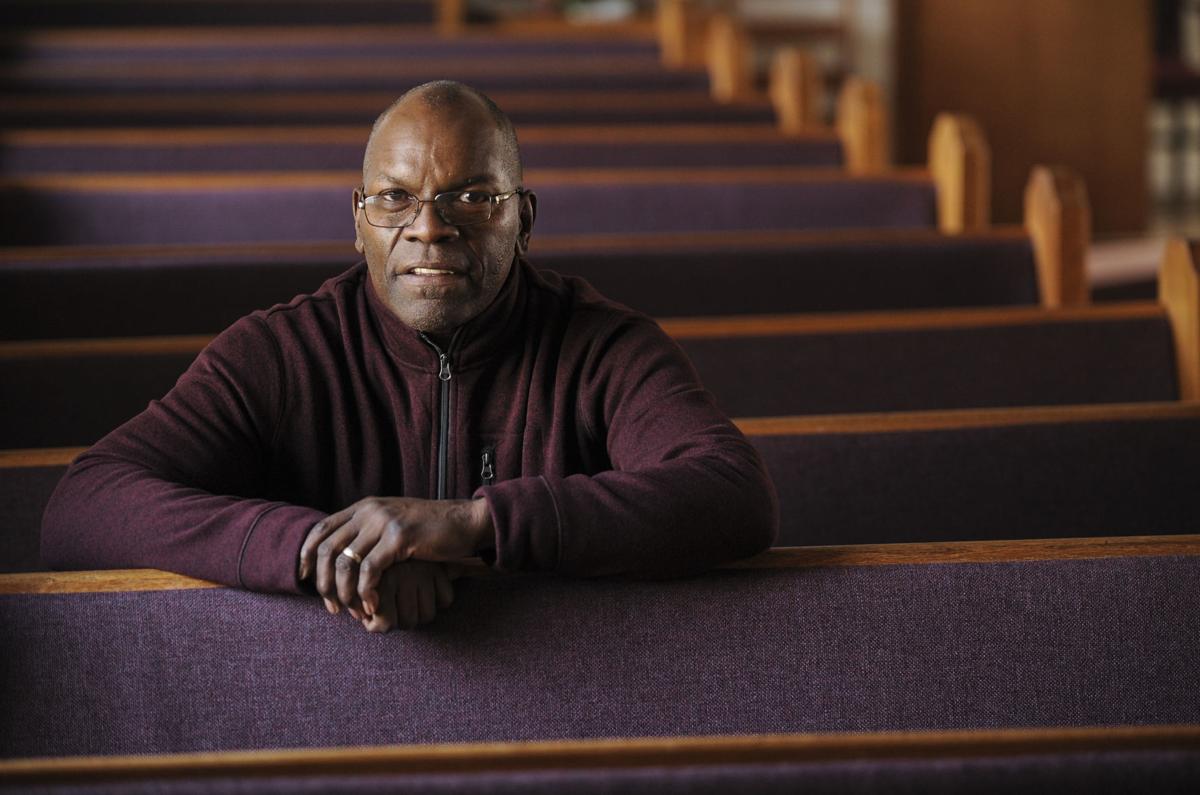 Next month, Billy Ray Young will have served for 20 years as pastor of Hartselle First Missionary Baptist Church. He says everyone can help others, a lesson he learned from his father. “We didn’t have a lot, but we gave what we had, our time,” he says. [JERONIMO NISA/DECATUR DAILY] 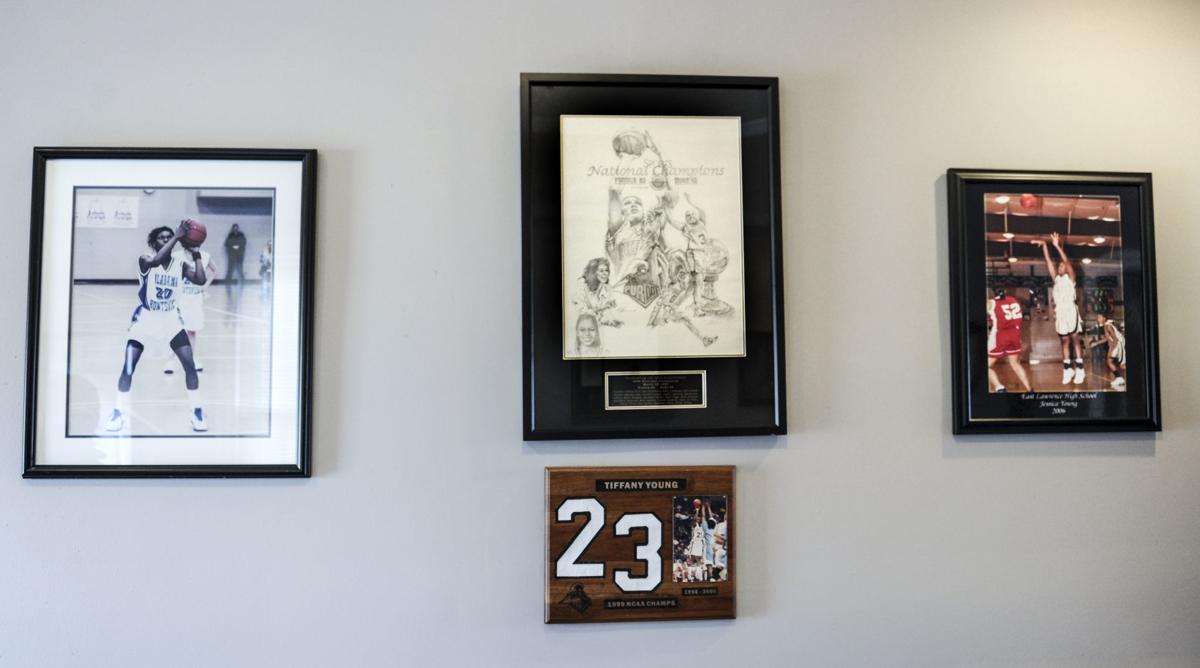 Pastor Billy Ray Young has pictures of his three daughters, Kim, left, Tiffany, who was a member of the Purdue University basketball team before she was killed by a drunk driver in Indiana in 1999, and Jessica, in his office at First Missionary Baptist in Hartselle. [JERONIMO NISA/DECATUR DAILY]

Next month, Billy Ray Young will have served for 20 years as pastor of Hartselle First Missionary Baptist Church. He says everyone can help others, a lesson he learned from his father. “We didn’t have a lot, but we gave what we had, our time,” he says. [JERONIMO NISA/DECATUR DAILY]

Pastor Billy Ray Young has pictures of his three daughters, Kim, left, Tiffany, who was a member of the Purdue University basketball team before she was killed by a drunk driver in Indiana in 1999, and Jessica, in his office at First Missionary Baptist in Hartselle. [JERONIMO NISA/DECATUR DAILY]

Heed the Call is an occasional series profiling local pastors and ministers. To nominate a pastor, email cgodbey@decaturdaily.com.

Sitting in the church office lined with photographs of his daughters and grandsons — his “pride and joy” — Billy Ray Young looked down the Hartselle street at the rows of houses and pointed to the structures he helped fix and the yards he mowed.

The 62-year-old Young will mark 20 years of preaching, teaching and leading outreach programs at First Missionary Baptist Church next month. A service celebrating the work by Young and his wife, Gloria, will be Feb. 2 at the church, 309 North Bethel St.

The anniversary is an unlikely one for Young, who declined the congregation’s initial offer to pastor the church, which came a few months after the tragic death of his oldest daughter.

A player on Purdue University’s basketball team, Tiffany Young died in a car accident caused by a drunk driver on July 31, 1999, four months after the Lady Boilermakers culminated a 34-1 season with a national championship win.

Her father delivered the eulogy at the funeral.

“I never blamed God. I ran to God. The one thing I can’t see myself doing is getting mad at God, at the one that’s going to carry me through this. If it had not been for the Lord, I would be in a mental institution,” Young said.

After Tiffany’s death, former and current coaches from Purdue flooded the Young’s Hillsboro home to share stories of “Tiff.” Young listened as Coach Lin Dunn described his daughter as “the best kept secret” until a chance video of her playing fell in the right hands.

“That got me thinking about how many children can play that come from poor families but don’t have the opportunity for anybody to see them. I wanted to do something to make sure these kids got noticed as somebody got mine noticed,” Young said. “I think about all the kids getting in trouble because they don’t have anything to do. I want to give them a chance, a place to go.”

As Young started on plans for the Tiffany Young Youth Foundation, the call from Hartselle First Missionary Baptist Church came. The congregation wanted Young to replace the retiring pastor.

“I said, ‘I’m not looking for a church.’ I had no plans on calling the pastor back, but he called me again and asked me to preach the month of January. After January he called again and said the church voted. They weren’t going to call anyone else to preach. They wanted me to be the pastor. That was the start,” Young said.

After hours of prayer, Young agreed to pastor First Missionary Baptist, despite the church’s inability to pay him a salary.

“Not only could they not pay me, they couldn’t cover the mortgage payment. I told them, ‘Let’s worry about the payment on the church. I’m not worried about a salary. In six months, we will talk about a salary,’” Young said. “Six months later, as I was going out the door, the finance secretary stopped me and said it was time to discuss salary. The church had enough money.”

In the past 20 years, Young led efforts to renovate the church, build pavilions and expand outreach programs, embracing the “mission” part of the missionary Baptist name.

That desire birthed the church’s nursing home ministry. The first Sunday of every month, the congregation visits area nursing homes, offering communion, prayer and songs. They call it “the church on wheels.”

“One man stopped me recently and said, ‘Pastor, my mama doesn’t know me, she doesn’t know my name, but when y’all start singing those hymns, she knows every word.’ We’ve had some people tell us their children never visit them,” Young said. “What we are doing is giving of our time. Often people don’t realize how valuable their time and a listening ear is.”

Young, who also served as mayor of Hillsboro from 2000-2008, learned that lesson as a child from his father.

“When we got home from school, my dad would tell us about the lady down the street that needed wood brought in, the yard mowed or the leaves raked,” Young said. “We didn’t have a lot, but we gave what we had, our time. I said, ‘Whenever I got up to where I could help somebody, that’s what I’m going to do.’ ”

When a then 18-year-old Young received his very first paycheck, he bought plants from a florist and delivered them to a nursing home.

Next, Young, a bi-vocational pastor who worked at General Motors while serving at Gurley Chapel CME, Ebenezer Chapel CME, Wheeler Chapel Full Gospel and First Missionary Baptist, hopes to help others by finishing an unfulfilled dream.

“We have four acres of land in Hillsboro that we are clearing off. That will be the home of the Tiffany Young Youth Foundation. A dream doesn’t have an expiration date on it. I think God is telling me it is time to start work on the foundation again,” Young said.

When did you feel a pull into the ministry? I grew up going to church, but it wasn’t until about 1979 when I felt God was working on me to preach. In 1980 I finally told my dad about it because I felt sick and miserable until I did. I preached my first sermon in January 1981 at my childhood church of Jackson Chapel CME Church.

Do you remember your first sermon? It was “Using God’s Vessels in Vain.” I was a bit nervous. After all this time, I still get a little nervous, but all that goes away once I get behind the Lord’s pulpit.

After your daughter died, where did you find strength? In the Lord. He brought me through. When she died, we went to Methodist Hospital in Indiana, but they had already taken her to the morgue and done the autopsy, so we didn’t see her until they brought her back to Reynolds Funeral Home. On our way home from there, the song “Stand” by Donnie McClurkin came on. “What do you do when you’ve done all you can … you just stand.” I live off that line. When down can’t get worse, you don’t have any place to go but up. I turned my face to the window coming down 65 during that song because I didn’t want my daughters, Kim and Jessica, to see me crying.

What is your prayer for the church? That the Holy Spirit will bring the church back to its intended purpose, and that purpose is for us to bring everybody together in Christ, not for us to separate people. It is sickening what is happening in the country. Our country has turned into “us” and “them.” You will always have an enemy when you feel like you are superior. I’m 62 and I’ve never seen anything like this. I am so sick of the left and the right. The love is gone. We lost our way. We lost our way bad. I pray we, as the church, will start loving one another. The Bible says, "A brother offended is harder to be won than a strong city.” That’s what the church is doing. We’re offending people and we don’t care. We live in a country where a Muslim can stand on a corner and pray three times a day, an atheist can stand there and say he doesn’t believe in God and I have the same right to stand there and say “Jesus is Lord.” I shouldn’t be mad at them and hate them. I have to love them, not offend them.

Workforce development must include focus on 'backfill' jobs

Top performances from the past week

Things to Do and Places to See in the Tennessee Valley