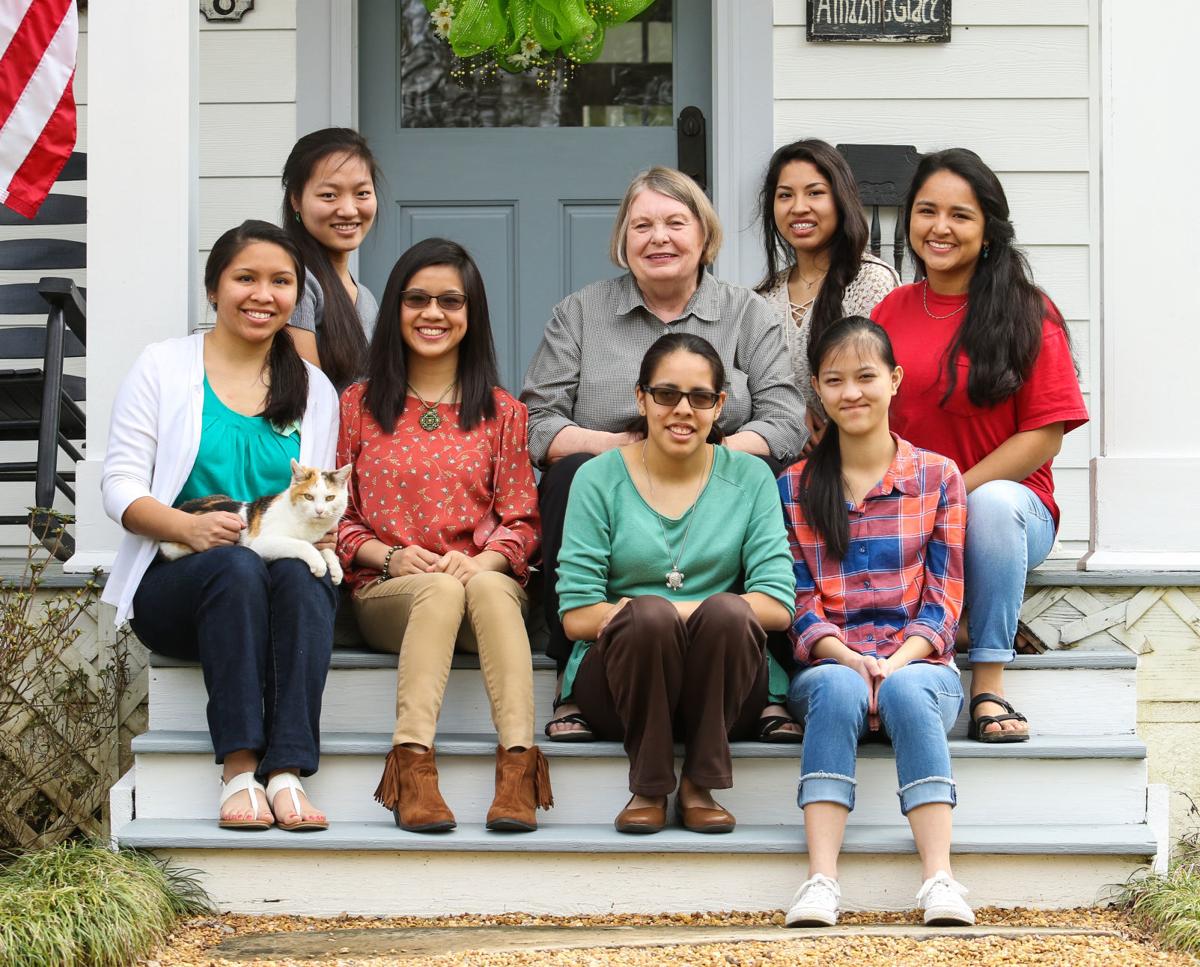 Corley Ponter, center, sits on the front steps of her home with seven of her adopted daughters at their home in Falkville. Front row, left to right, Isleta, Lei-Ling, Esperanza and Xiang. Back row, Xiaowen, Reyna and Maria. [CHRIS SHIMEK/DECATUR DAILY] 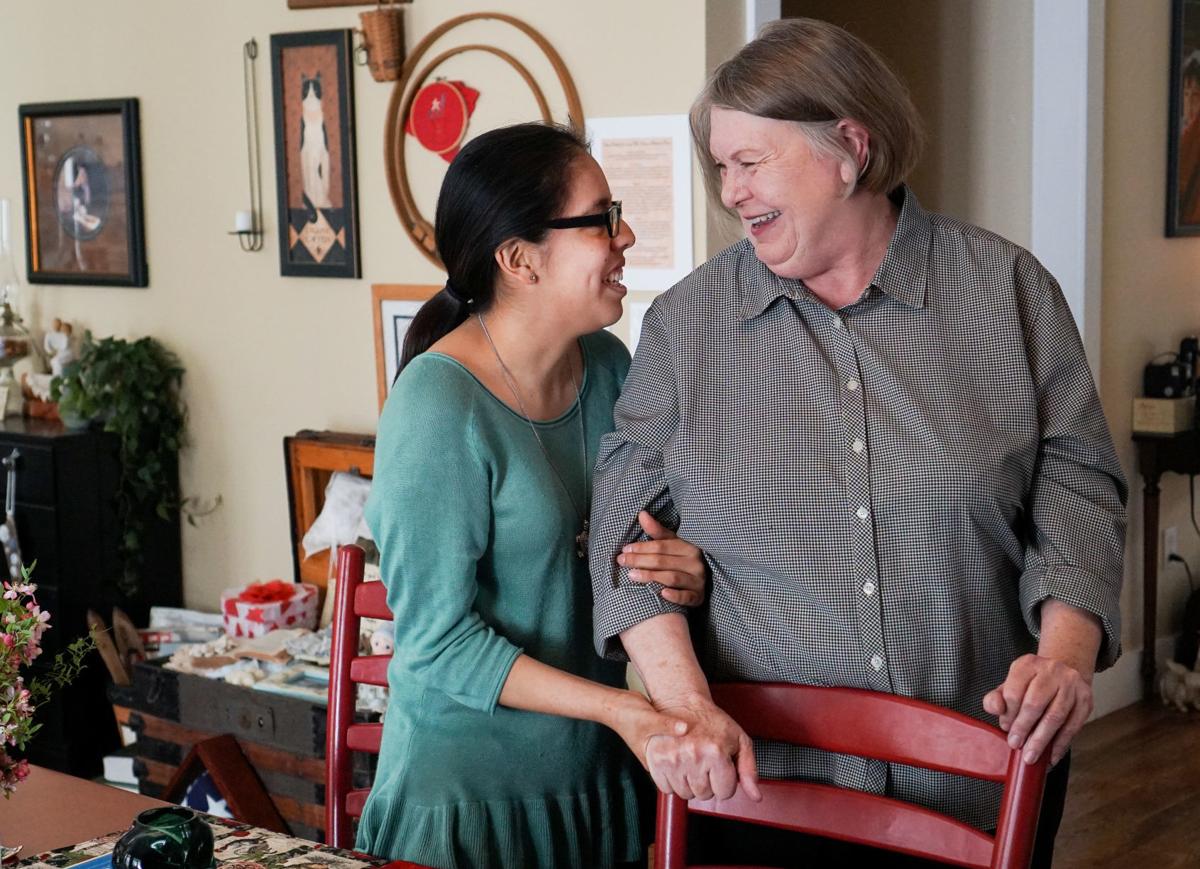 Esperanza Ponter shares a laugh with her mother Corley Ponter during a visit to the Ponter family home in Falkville. [CHRIS SHIMEK/DECATUR DAILY] 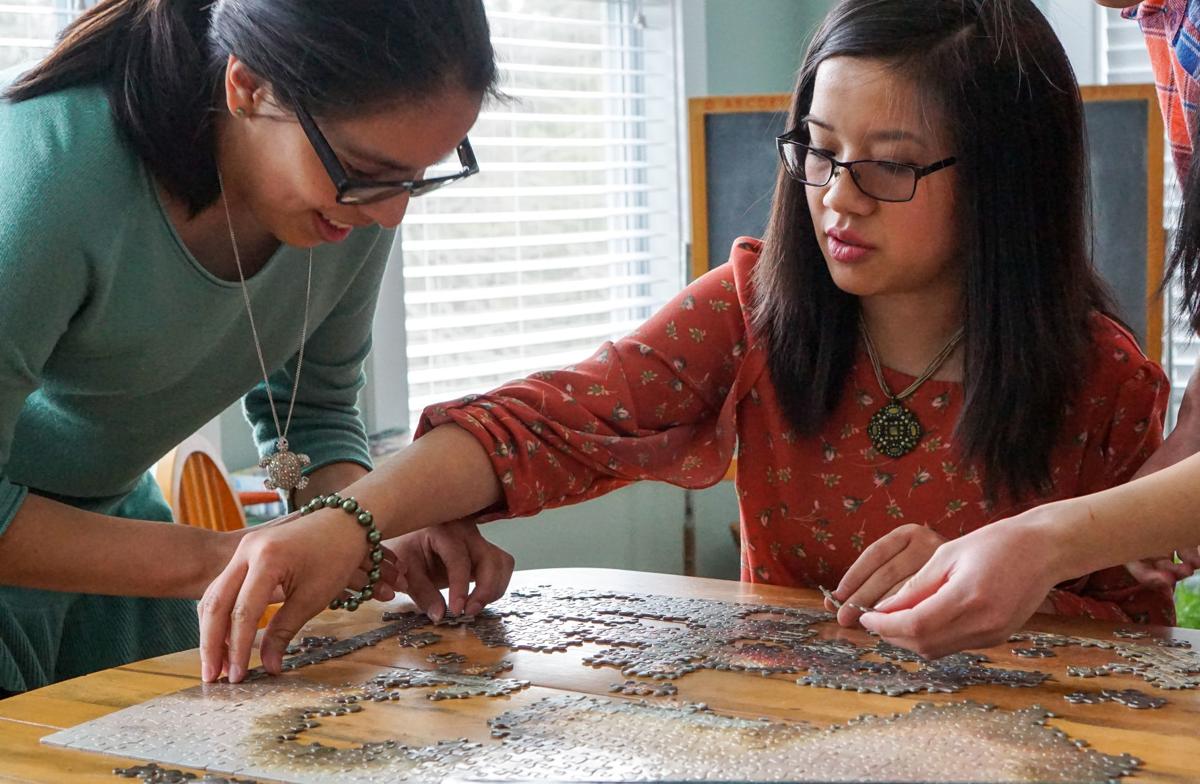 Lei-Ling Ponter, right, works on a puzzle with her sister Esperanza at their home in Falkville. [CHRIS SHIMEK/DECATUR DAILY] 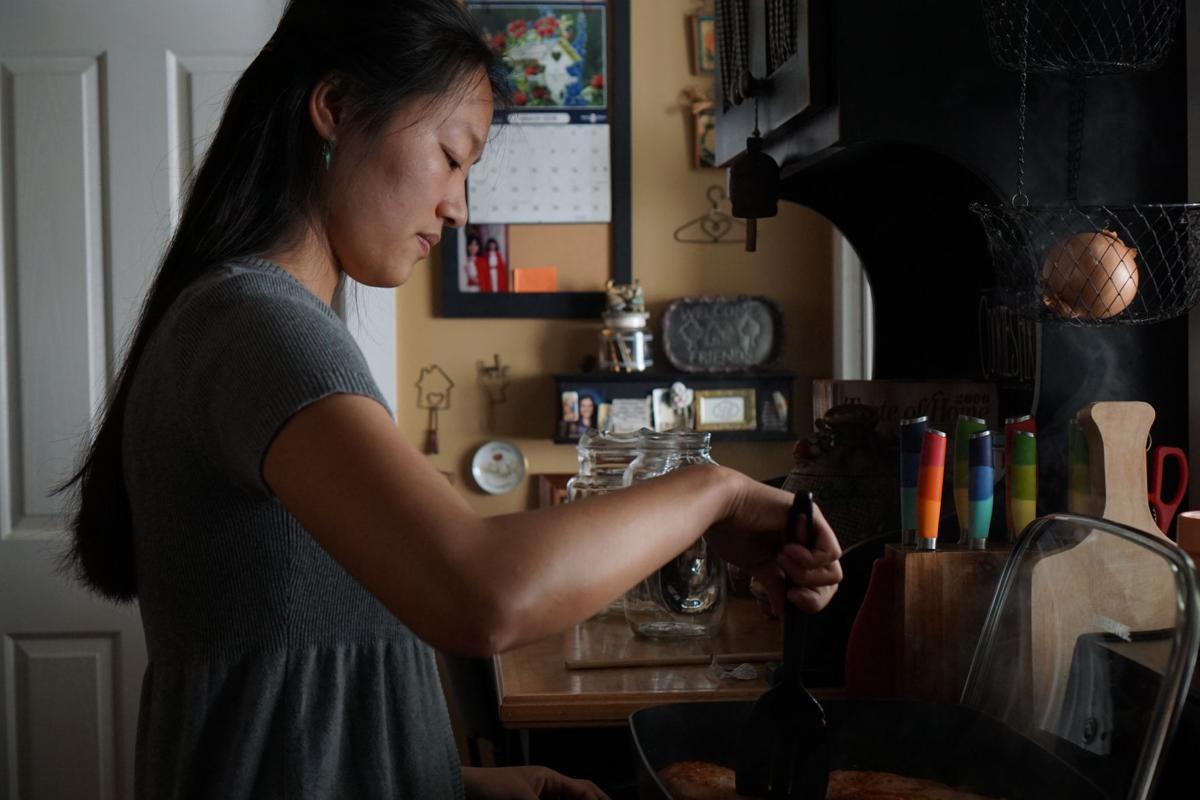 Corley Ponter, center, sits on the front steps of her home with seven of her adopted daughters at their home in Falkville. Front row, left to right, Isleta, Lei-Ling, Esperanza and Xiang. Back row, Xiaowen, Reyna and Maria. [CHRIS SHIMEK/DECATUR DAILY]

Esperanza Ponter shares a laugh with her mother Corley Ponter during a visit to the Ponter family home in Falkville. [CHRIS SHIMEK/DECATUR DAILY]

Lei-Ling Ponter, right, works on a puzzle with her sister Esperanza at their home in Falkville. [CHRIS SHIMEK/DECATUR DAILY]

Nervously, Corley Ponter practiced the words in her head over and over again. She knew how silly they sounded. At 44 years old, with her two adopted daughters about to leave the house and her 10-year-old biological son becoming more independent, did she really want another baby in the house? Would her husband?

Despite the logical reasons not to adopt, ever since the Morgan County woman saw one of Oprah Winfrey’s shows on adoption, the idea lingered in her mind. One morning, as she busily went through her morning routine and prepared to leave for work, Corley Ponter prayed, please, just don’t let him laugh at me.

She inhaled and blurted out, “What do you think about us adopting again?”

Since that day 22 years ago, Tony and Corley Ponter adopted eight girls, four from Bolivia and four from China. During the past two decades, as they battled to adopt each of the children, experienced stints of unemployment, lost their home to a fire and Corley fought an aggressive form of breast cancer, they turned to their faith for strength. And taught their children to do the same.

“Every step of this journey has been wonderful. I have grown closer to God and learned to depend on him more and more,” Corley Ponter said. “I hope we have taught our children to be servants of God. I tell my girls, ‘I may not be able to talk to you the last moments of my life, so I’ll just tell you now, stay focused on Jesus and be servants of God.’”

The girls, ages 22 to 14, are putting those lessons into action, positively impacting the community through acts of kindness. The girls — China, Maria, Lei-Ling, Xiaowen, Reyna, Esperanza, Isleta and Xiang — speak humbly of their outreach, from cleaning houses, making meals and visiting widows, the sick and the elderly to playing music and singing in the choir at First Baptist of Decatur to sewing pillowcases and dresses for orphanages.

They, the Ponters insisted, are the ones being blessed.

“We see how important it is to the people we visit and serve. They have become our friends and family. They are making our lives better,” said 18-year-old Isleta Ponter.

The feeling is mutual, said Wayne Bowen, a member of First Baptist.

“They are so precious to me. They clean my house, bring me lunch and eat with me. It is rare to find people who will do for others like the Ponters,” Bowen said. “Sweet Esperanza, Corley asked her if she wanted to sing in the choir with her sisters and she said, ‘No, then Mr. Bowen would not have anyone to sit by in church.’ They are such sweet girls. It is amazing how God brought each of them here.”

Tony and Corley Ponter agree. Only God, they said, could create so many miracles.

Twenty-two years ago, after researching agencies, the Ponters, knowing they couldn't afford the cost, decided not to move forward with adoption. Six months later, while on vacation, a familiar image caught Corley Ponter's attention.

“There was Oprah again. I never watch Oprah, never. We didn’t even have a TV at our home at that time, but something told me to stop. Lo and behold, it was another show about adoption. We came back home and decided to take all of our savings and adopt one child,” Corley Ponter said.

They chose China, because their oldest two daughters, who they adopted after visiting a battered women’s shelter in Tennessee, had pen pals in the country. From those letters, the Ponters learned how difficult life could be for girls, specifically orphan girls, in China.

For months, they waited. Eventually, after telling the Ponters that China had changed the rules of adoption, an agency presented Bolivia as an option.

Using every cent of their savings, Tony and Corley Ponter traveled to South America for one month and adopted Maria, an 11-month-old girl found in an alley by a security guard.

“They were surprised the wild dogs had not gotten her. Thankfully God had a plan,” Corley Ponter said. “I turned 45 in Bolivia, we were too old to adopt a baby that young, so they just made her older by six months.”

Seven months after adopting Maria, Tony Ponter received a phone call from another adoption agency about a 2-year-old girl in China. The Ponters immediately said yes and got a loan on their home to cover the cost.

“I was fine with one until they called and told us about China,” Corley Ponter said.

Within months, an agency contacted the Ponters about Lei-Ling, an 18-month-old girl from China.

Weeks later, the Ponters received a $10,000 check in the mail. The next week, an $8,000 check arrived. The money, they learned, came from the estate of Corley Ponter’s uncle. He and his wife had no children, so the money was split between his 10 nieces and nephews.

Tony and Corley Ponter, with their son and three adopted daughters in tow, returned to Bolivia with the intent of adopting two girls, 2-year-old Reyna and 18-month-old Isleta.

At the orphanage they saw a photograph of Esperanza, a malnourished 1-year-old, who screamed constantly and rocked back and forth to sooth herself. In her crib hung a bottle with watered-down rice milk. She ate what she caught.

“They had left her to die,” Corley Ponter said, smiling at her now 18-year-old daughter. “She is our special, special girl. She tells me I’m special, too.”

The orphanage told the Ponters they could leave with Reyna and Isleta, but not Esperanza. She was not up for adoption.

“They told us flat out, you can’t take her. We told them, we were not leaving this child. So, we took all three,” Corley Ponter said. “At that point, we really thought we were finished.”

And they were, at least for three years, when they received a call about Xiang, a 2-year-old girl in China with a cleft lip.

Tony and Corley Ponter were in the process of adopting Xiang when their Falkville home burned. The two adults and seven children moved into a double-wide mobile home while they rebuilt. When the agency learned of the family’s living arrangements, it would not approve the adoption. The Ponters’ Sunday school teacher allowed them to move into his four-bedroom home in Decatur.

“Xiang’s adoption took twice the time and twice the money, but she was worth the wait. She’s fantastic. At that point we knew we were done adopting,” Corley Ponter said.

So sure was she, when China Ponter asked if they would ever adopt again, Corley Ponter said, “No way, the house burned downed, we don’t have a penny of savings and we are old.” The next morning at Sunday school, however, the late-Sandra Bowen, Wayne Bowen’s wife, asked for prayer requests for a 12-year-old girl originally from China in need of a home.

“I knew immediately that Xiaowen was meant to be with us,” Corley Ponter said. “We started signing papers like we had millions and we didn’t have any. We were acting like we were rolling in the dough.”

They received funds from an agency that loans money, interest-free, for adoptions. First Baptist led a campaign to collect donations for Tony and Corley Ponter, who were able to pay off the money immediately.

Seven years have passed since the Ponters adopted Xiaowen, now 20.

“We are so blessed,” Corley Ponter said, looking around the dining room table at her seven daughters still living at home. “At a time when we were in need and didn’t have money or a place to live, the church came to our aid. We never wanted for anything. Now, we are in a position to give back. The girls do a lot for others and are very ministry-oriented. That is the thing that makes me the proudest.”

Corley Ponter home-schooled each of the girls, allowing them extra time to do outreach.

“They are very kind and helpful to everyone. If a widow or old person needs help, the Ponters will find out. They’ve pulled up carpets, painted cabinets, painted whole homes and refinished floors,” Ann Rutledge said. “My husband recently died and they’ve overwhelmed me with their kindness and generosity.”

The family became especially close to Mary Draper, who the girls refer to as meemaw.

“We met her by accident. We had a friend we were going to sing ‘Happy Birthday’ to, but we got the wrong person. That was Meemaw. She didn’t correct us. We met her again when we were sending out cards to homebound people,” Isleta Ponter said.

Draper kept the card in her purse, handling it so much, the paper tore into pieces. The girls attend Sunday school, celebrate the holidays and watch University of Alabama football games with Draper.

“They go to every Bama football game. She sits real close to the TV, and Isleta listens to it on the radio. We know nothing about football, have never been to a game, but we’re learning,” Corley Ponter said.

The girls’ impact on their communities will extend further as they begin careers — China in public health, Lei-Ling as an early elementary education teacher, Reyna as a special education teacher, Xiaowen as a nurse and Maria as an interpreter for the deaf.

“I had to learn a language in high school. I tried Spanish, but couldn’t do it, so Mother offered me sign language,” Maria Ponter said. “God provided me the funds to go on a mission trip to a deaf institute in Belize. Being able to talk with the children there, I knew this was my calling.”

Isleta, 18, is taking classes at Calhoun; Xiang, 14, is in eighth grade, and Esperanza, 18, took on the responsibility of caring for her parents.

“Sometimes I think, when they get married, their babies could look like me. Then I think, how silly, they could never look like me. That’s how much they are my children. I never think of them as being adopted,” Corley Ponter said. “I’m not going to say we aren’t going to adopt again. Our only regret is that we got started so late. Our life has been wonderful, absolutely wonderful.”