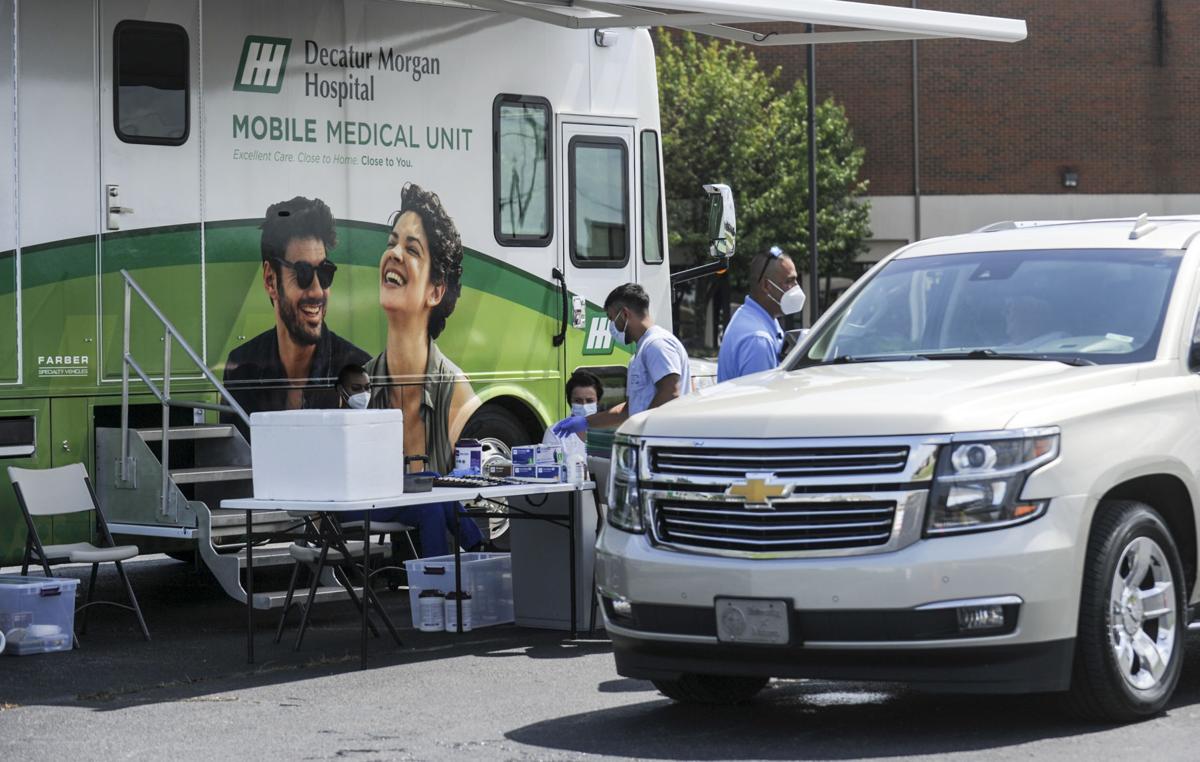 People receive drive-thru testing for the coronavirus at Decatur Morgan Hospital's mobile unit Wednesday in the parking lot of Westmeade Baptist Church. Of those tested in Morgan County, 22% have the virus. The infections are causing crippling absences at local businesses. [JERONIMO NISA/DECATUR DAILY] 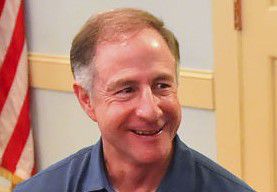 Local businesses are feeling the pinch as a surge in COVID cases causes numerous absences, and some are taking aggressive steps to convince their workers to get vaccinated.

Julius Uhlmann, president of Micor Industries in Decatur, said his company is on track to have almost five times the lost work hours from COVID-related absences the remainder of this year as it had in all of 2020. Jack Fite, head of Fite Building, said about 20% of his workforce has been impacted by the virus in the last month — either through infections or close contacts with those who are infected — far more than at any other time in the pandemic.

“Workers are scarce anyways,” said Jeremy Nails, CEO of the Morgan County Economic Development Association. “When you couple that with absences due to an infection or an exposure, it just magnifies that. It leaves our companies struggling to cover shifts, meet production quotas, deal with supply-chain issues.”

“It’s going to be significantly damaging to businesses because of lost hours,” he said. “It’s quite damaging this year. We anticipate it to be terrible. … It is starting to affect production more and more.”

Uhlmann and Fite — who despite being vaccinated was at home Thursday with a mild case of COVID — said their sense is that transmission of the virus is taking place largely outside the workplace.

“What’s hitting us is somebody will call and say their kid got it and their wife had it, so they’ve got to quarantine,” Fite said. “And then if they haven’t had the vaccine it’s an even more stringent quarantine. I really don’t know if they’re getting it on the job or it’s coming from school or just at home.”

Uhlmann also points to community factors that impact plant operations. “We think (many of the absences are) because of the high infection rate, the opening up of Alabama on masks and restaurants and travel, the pent-up demand, schools opening back up, and the contagion rate (of the delta variant) is so much higher. And we’re a very low-vaccination state, so that hurts us significantly.”

Fite and Uhlmann agree the vaccine is essential to curb the impact of the virus, as do health experts including Dr. Sarah Nafziger, vice president of UAB Hospital Clinical Services.

“This delta variant, it is so much more contagious,” Nafziger said Thursday, and it’s especially affecting people in the prime work ages of 20-40 because of their low vaccination rates. “We’re seeing COVID affecting younger people more, it’s in those age groups that are less vaccinated that are really being more affected by this variant.”

For employers, vaccinated employees are less infectious to coworkers, lose less work from quarantine if exposed to the virus, and if infected generally have less severe illness than their unvaccinated peers.

“There’s some doubt in a lot of people’s minds about a lot of things and I understand that,” said Fite. “But I think you just have a better team if everybody’s vaccinated. We can be safer to each other if everyone’s vaccinated.”

At Micor, Uhlmann has been especially aggressive at trying to get his employees vaccinated — an effort that he said has not been entirely successful.

“We are taking steps where if you don’t have a COVID vaccination, then you’ll have to stay masked at all times in the plant. We’re going to continue to ratchet that up,” he said.

Fite said he has brought back a mask requirement for office workers, but as State Health Officer Dr. Scott Harris said Thursday, even those are controversial.

“For whatever reason masks have become this really partisan symbol, like everything else around COVID," Harris said. "It’s really unfortunate that we’re having to have those kinds of conversations, but the scientific evidence on masks is very clear. People who consistently mask are less likely to get infected. They’re less likely to infect others.”

Uhlmann is working especially hard to convince senior employees to get vaccinated.

“If they would vaccinate, we know other employees would follow them because of their status within the hierarchy. We continue to talk to those individuals,” he said.

Nails said that's a strategy several local industries are trying, with many supervisors being very public about their vaccinations "to lead by example."

Both Micor and Fite Building are giving employees paid time off for COVID-related absences, a step aimed in part at preventing sick workers from having a financial incentive to come to work and thereby spread the virus to coworkers. Both, however, said the growing number of absences are making this policy difficult to sustain.

At Micor, Uhlmann is trying to use a carrot-and-stick approach. Paying wages for COVID-related absences will play into that.

“Every hour that is lost, so far, we have paid for lost hours until they come back with a negative test,” he said. “What we are going to do, and we’re in the process of this now: If you’re not vaccinated, then once you run out of your (normal paid time off) we probably won’t pay. If you get your vaccination and you get the virus and you have lost hours, then we’ll continue to pay.

“Everything we’re trying to do is get everybody vaccinated.”

Uhlmann said he has to be careful with the “stick” approach, however.

He said he has considered mandating that employees get vaccines but dismissed the idea.

“I believe we would lose at least 10-12 key employees that would just walk out the door and go to work somewhere else,” he said.

Nails said other employers are facing the same dilemma.

“It’s kind of a Catch-22. You don’t want to lose people by mandating something. But with incentives, there are some people who are just not going to take the vaccine, and I don’t think there’s anything you can do to change that person’s mind,” Nails said.

So Micor continues to focus on the carrot. Uhlmann said he provides personal protective equipment to employees to use not only at work, but that they can use at home. He provides numerous vitamins to employees and their families aimed at lessening the severity of the virus in those that contract it.

His other big push is education.

“We talk constantly at weekly employee meetings about the odds and the statistics based around vaccination,” he said. “We’re trying to get people to fundamentally not read Facebook and start to look at real facts; that’s what we try to talk about in the building — facts.”

Fite also is seeking to educate workers on the benefits of vaccination.

"I sent out an email to everyone last week encouraging them with the facts as I know them today and that’s what we’re going to continue to do, more encouragement," he said.

Despite their efforts, COVID is taking a toll on both businesses.

“That whole first wave did not hit us that hard," Fite said. "I think our company did a good job of trying to mitigate things with policies that helped us, but this last wave is hitting us pretty hard. ... It’s definitely hit all of our job sites.”

Micor is having the same struggle.

“Where we only lost about 2,200 hours in 2020 due to COVID issues — we had a really aggressive plan here at Micor; it worked out well for us — I’m anticipating that between now and the end of the year, our hours could exceed 10,000 hours lost,” Uhlmann said.

The COVID-related absences are not unique to Micor and Fite Building, Nails said.