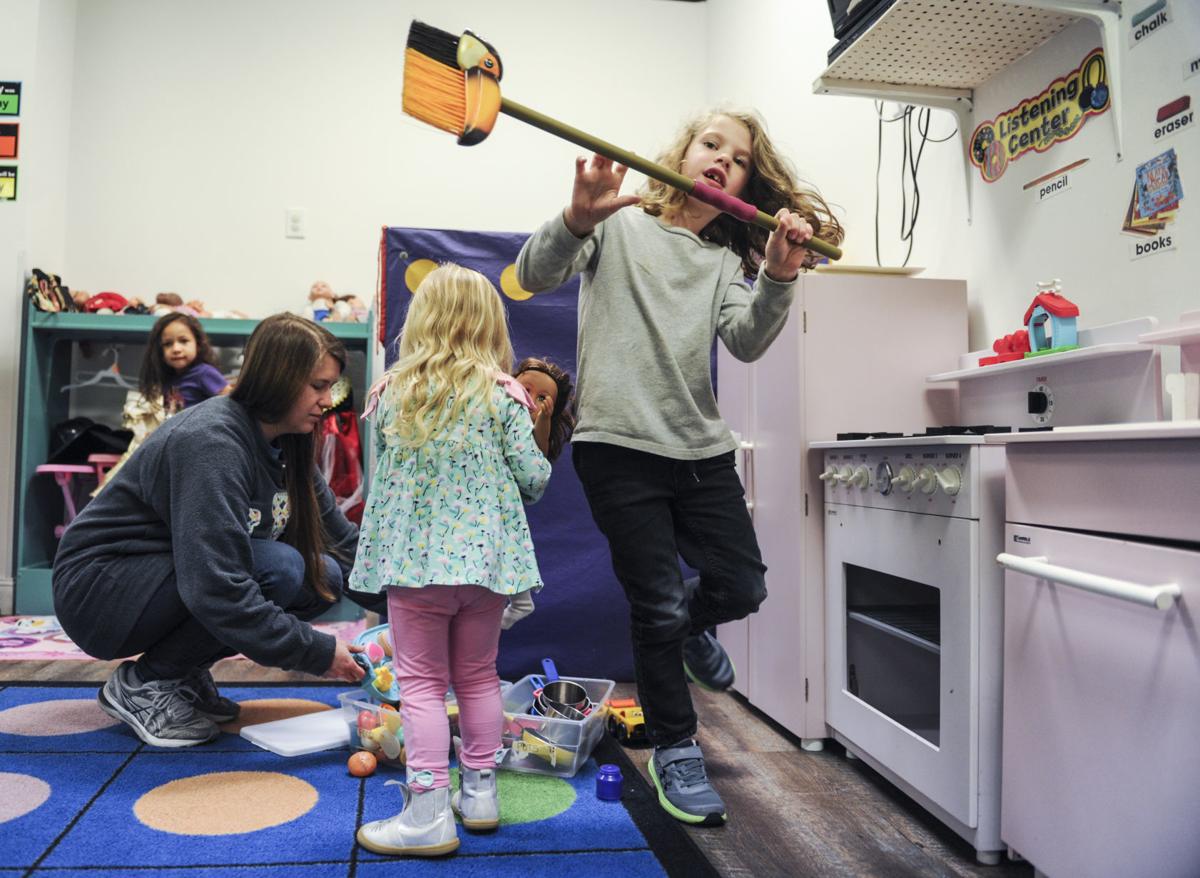 Director Lauren Iverson plays with her two children, Ellie Mae, center, and Bentley, and with Kaylee Brown, background, at Kids Central day care center on Monday. Iverson said her plan was to stay open but that could change as directives about the new coronavirus change. [JERONIMO NISA/DECATUR DAILY] 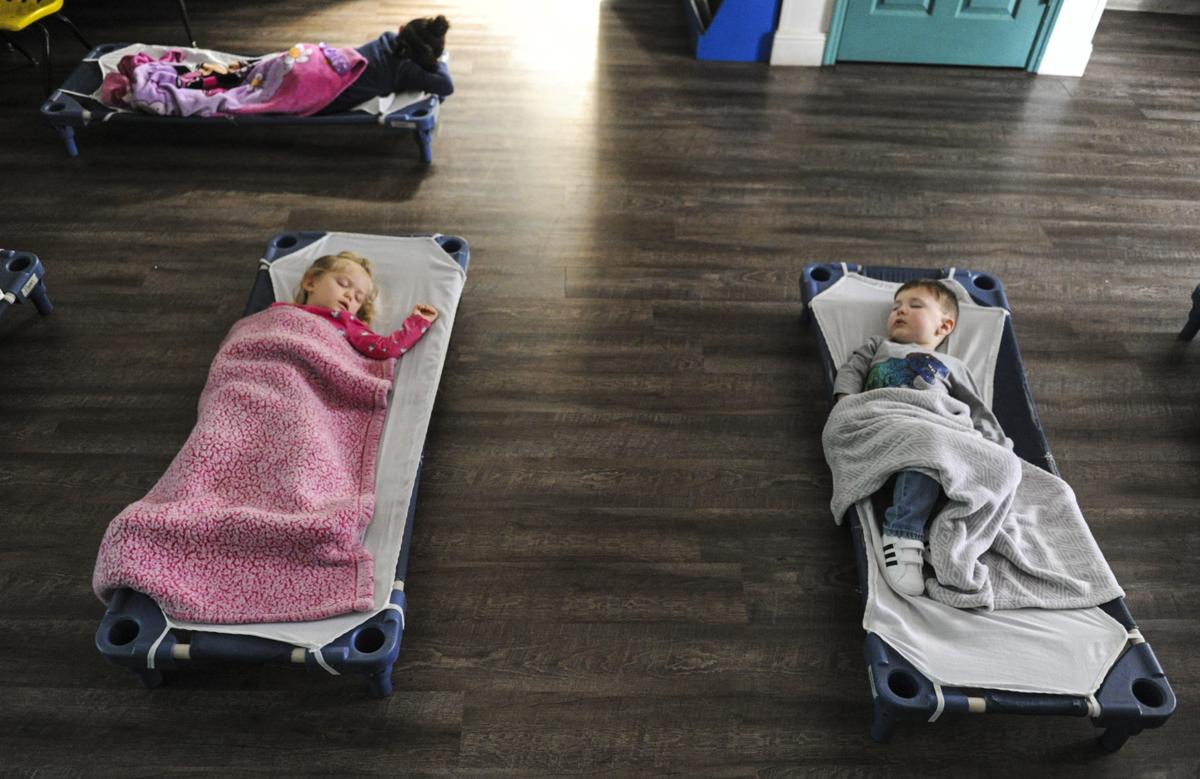 Director Lauren Iverson plays with her two children, Ellie Mae, center, and Bentley, and with Kaylee Brown, background, at Kids Central day care center on Monday. Iverson said her plan was to stay open but that could change as directives about the new coronavirus change. [JERONIMO NISA/DECATUR DAILY]

Despite the closures of Alabama’s K-12 public schools this week, some day care programs plan to keep their doors open for now, and local school districts are preparing to provide meals for children.

“As of right now, we’re open,” said Lauren Iverson, the director of Kids Central Child Care and Learning Center in Decatur, on Monday. “We’re playing it day by day.”

A sign posted at the entrance advises that a child must be fever-free for 24 hours without medication to attend. But, starting today, the staff will take an extra step, taking temperatures “before kids are allowed to stay,” Iverson said.

State Health Officer Scott Harris on Monday recommended that day cares close unless they can maintain appropriate distances between those at the facility.

“They need to be able to maintain a 6-foot distance. That's probably not a practical recommendation for day cares. So if they're not able to do that, then our recommendation would be that they close," Harris said. "That's a difficult recommendation to make. That affects a lot of people, the parents in particular but also the people that are employed in that facility. But we think that's the safest recommendation we can make.

“The truth is that I don't know that (6-foot distancing) is a practical recommendation. That's the model we're asking people to think about, and if it doesn't fit with what you're doing, you need to consider canceling.”

In all, the Kids Central facility, which also provides after-school care, has about 150 children, ages 3 weeks to 12 years. Even though the program remains open, attendance has dropped, Iverson said, with only about 20 of 65 children in the day care program attending on Monday.

Precautions there include frequent hand-washing and sanitizing and the use of hand sanitizer for those entering the building. Disinfecting foggers will also be used after hours.

“We’re staying open,” said Lela Baker, the director of Kids N Us in Decatur, "and we’re taking extra precautions.” That includes stepping up sanitizing efforts and frequent hand-washing. Parents are asked to keep their children at home if they have a runny nose, fever, sore throat or are coughing, Baker said.

The program, which includes after-school care, has about 60 children, ages from 3 weeks to 12 years.

Some programs, however, follow public school schedules and will be closed today.

Katelyn Dodd, the director of the Decatur City Head Start on Sandlin Road, said that facility follows the Decatur City Schools’ schedule. The program serves children, from birth to 5 years.

“We will be closing effective (today),” Dodd said.

Kim Dodd, the director of children's services with Community Action Partnership of North Alabama, said the policy for Head Start and Early Head Start programs is to follow the schedule for the school system where the center is located.

Those programs serve about 2,000 children in about 125 classrooms across 15 counties, she said.

"Every child will receive a care package," including age-appropriate activities, Kim Dodd said. Packages will contain food that a child can easily open and others will have diapers and formula.

Angie Talley, the owner and director of Angie’s Tender Care in Moulton, is staying in contact with Department of Human Resources personnel in Montgomery for guidance.

“We will be open as of right now unless we’re instructed otherwise,” said Talley, whose facility has 65 to 67 children ages 6 weeks to 12 years. She said that if children show signs of illness, they are separated from the other children and their parents are called.

As Decatur and Morgan County public schools are closing, those districts are providing meals for children while classes aren’t in session.

Breakfast and lunch will only be available for curbside pickup from 10:30 a.m. to 1 p.m. at Austinville, Banks Caddell, Benjamin Davis, Frances Nungester, Oak Park, West Decatur and Woodmeade elementary schools.

“After March 30, for students who are food insecure, we are working with local community agencies to feed them during spring break,” said Dwight Satterfield, deputy superintendent of school safety and student services with Decatur City Schools.

All Morgan County students have advisers, who were contacting parents on Monday to find out who would need meals, said Superintendent Bill Hopkins. Delivery would be in place for those with hardships, he said.

“This is uncharted territory,” said Hopkins, adding that the school district has been “overwhelmed” by people in the community offering to assist. “We’re making contingency plans in case (the closure) goes longer,” he said.

For Lawrence County Schools, the Child Nutrition Program will be providing food, and the first curbside pickup with multiple meals is planned for Wednesday from 10:30 a.m. to 1 p.m., said Michelle Chenault, the CNP coordinator. The curbside pickup will be at the district's six elementary schools, and meals will be handed out according to the number of children in the vehicle, up to 18 years of age, she said.

The meals handed out Wednesday will cover through Friday, she said.

Chenault said the pickup schedule after Wednesday will be provided on the school and district websites, school Facebook pages and through the district's mass phone call system.