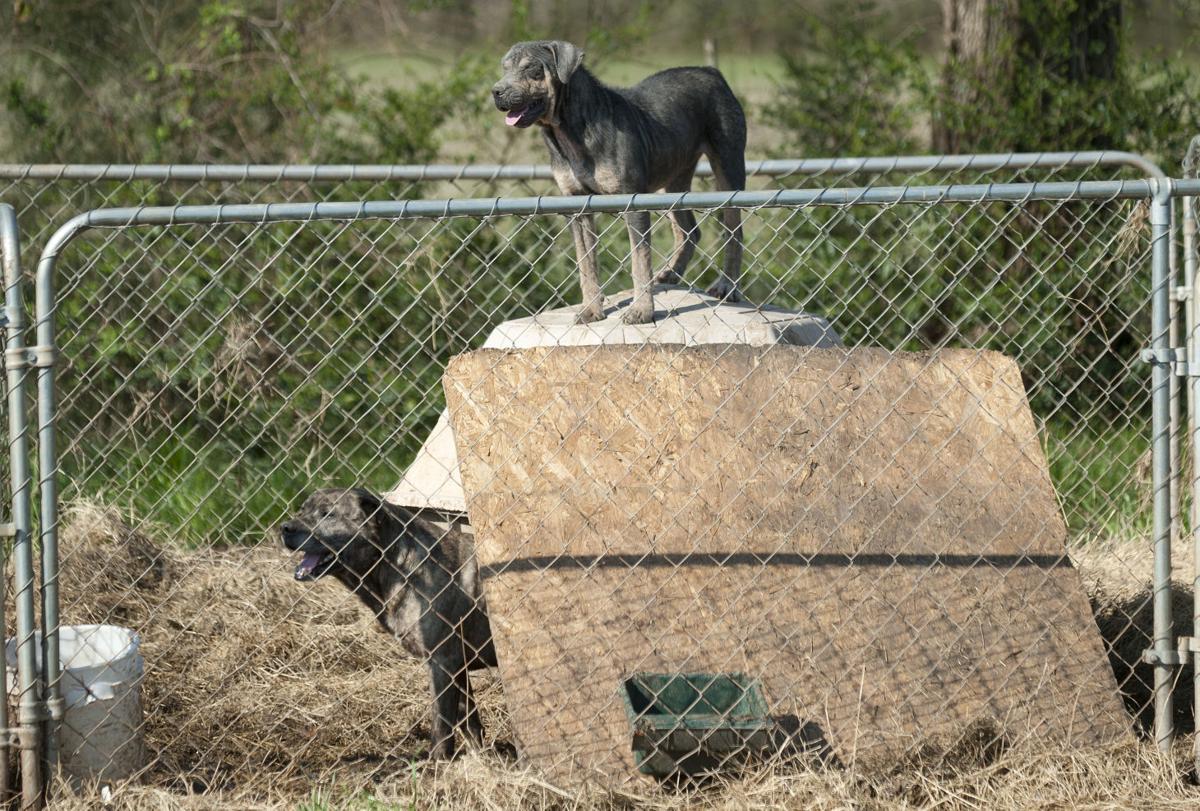 Above: A dog stands on a kennel while another looks past a chain-link fence Wednesday at the Animal Rescue Shelter of Lawrence County. Below: Owner Bobbie Taylor gives a tour of the site. 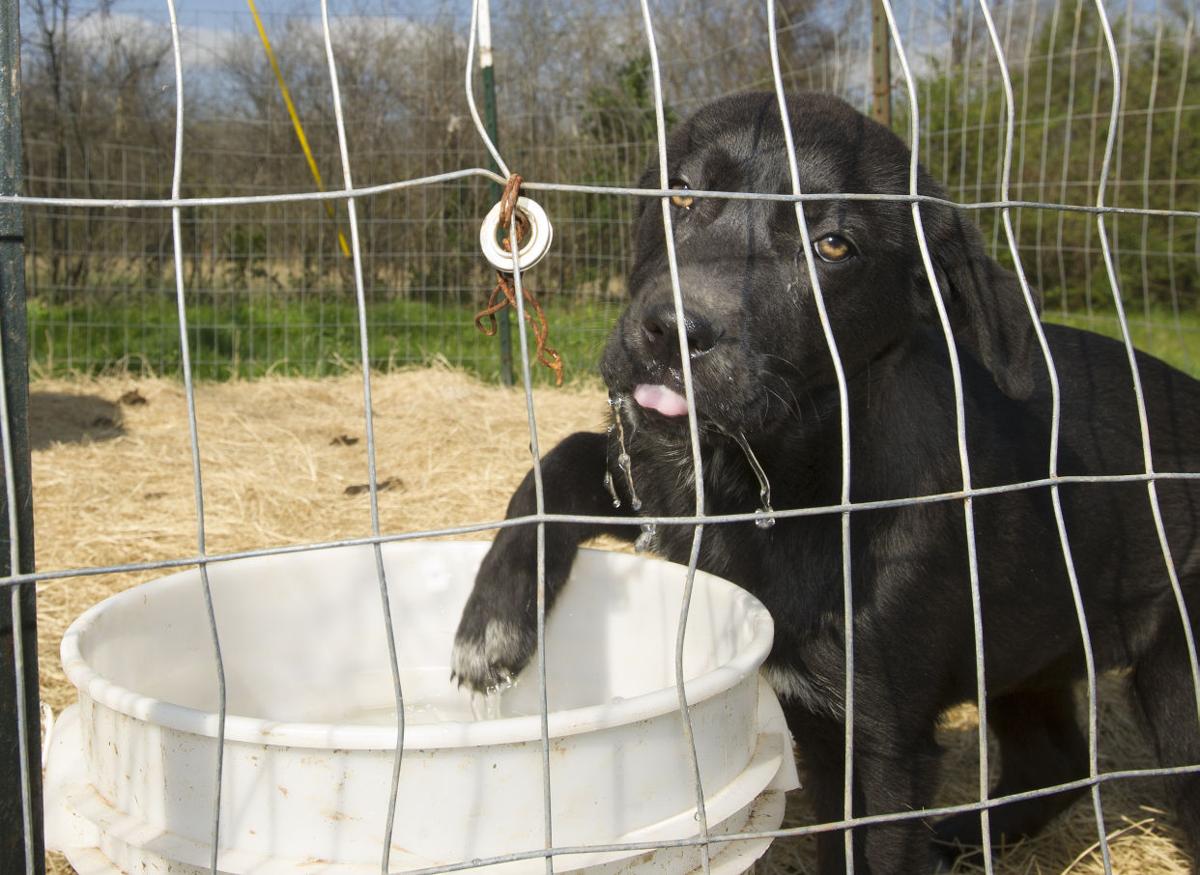 A puppy drinks from a bucket of water at the Animal Rescue Shelter of Lawrence County. 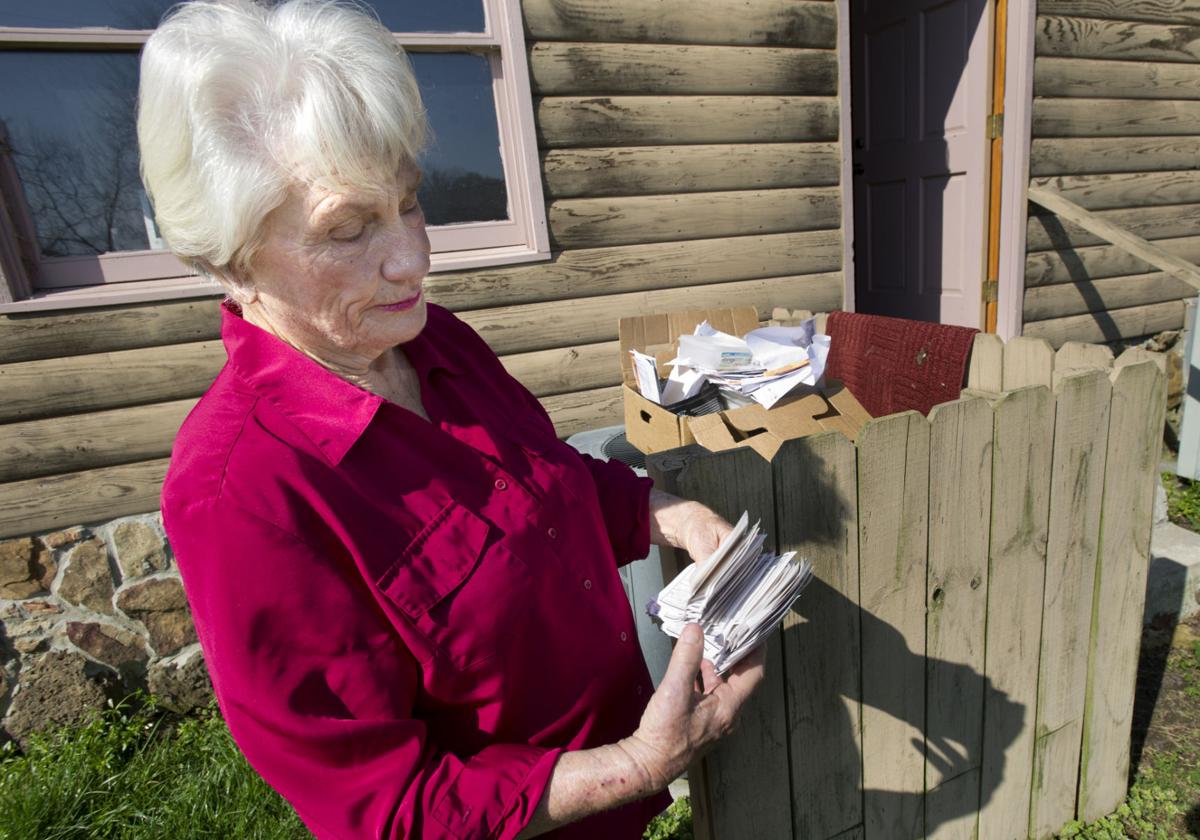 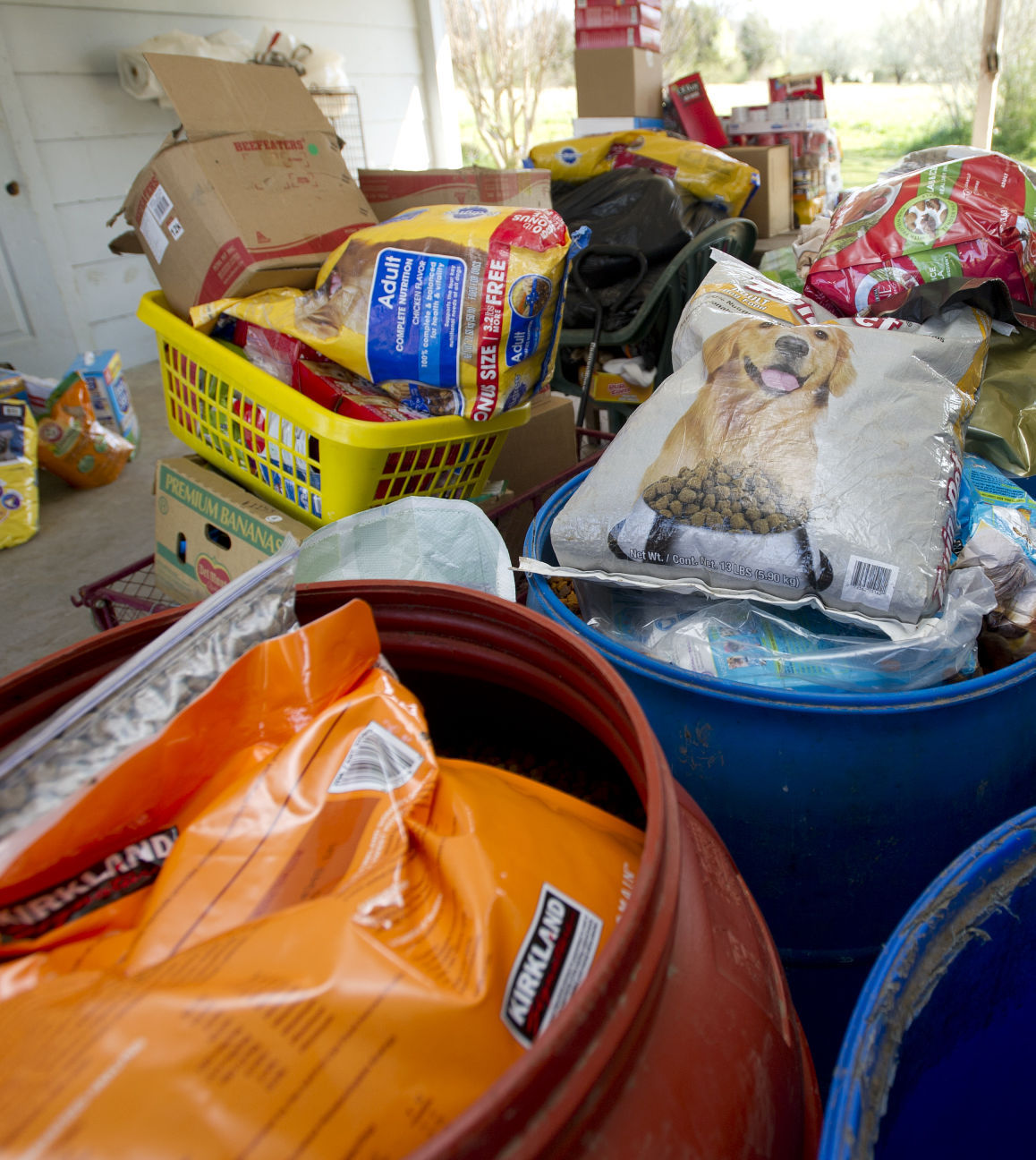 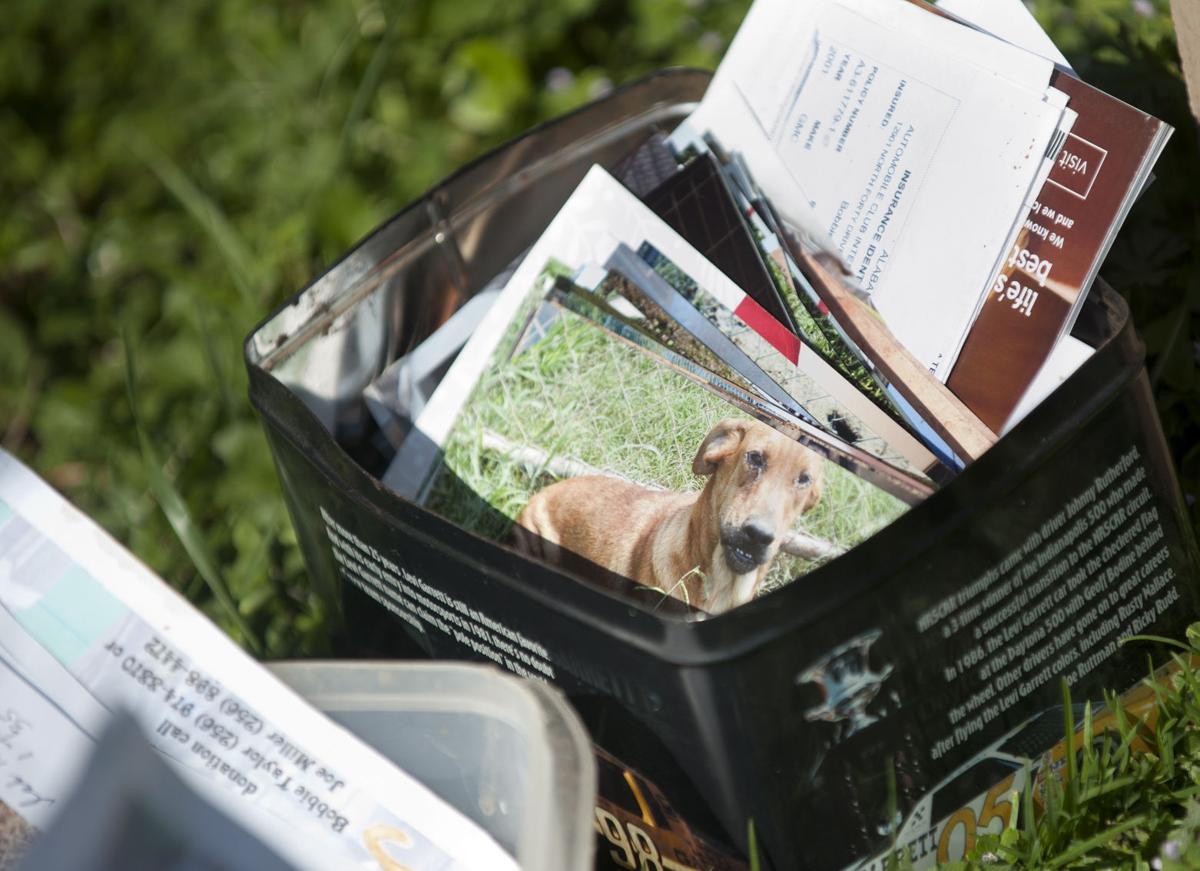 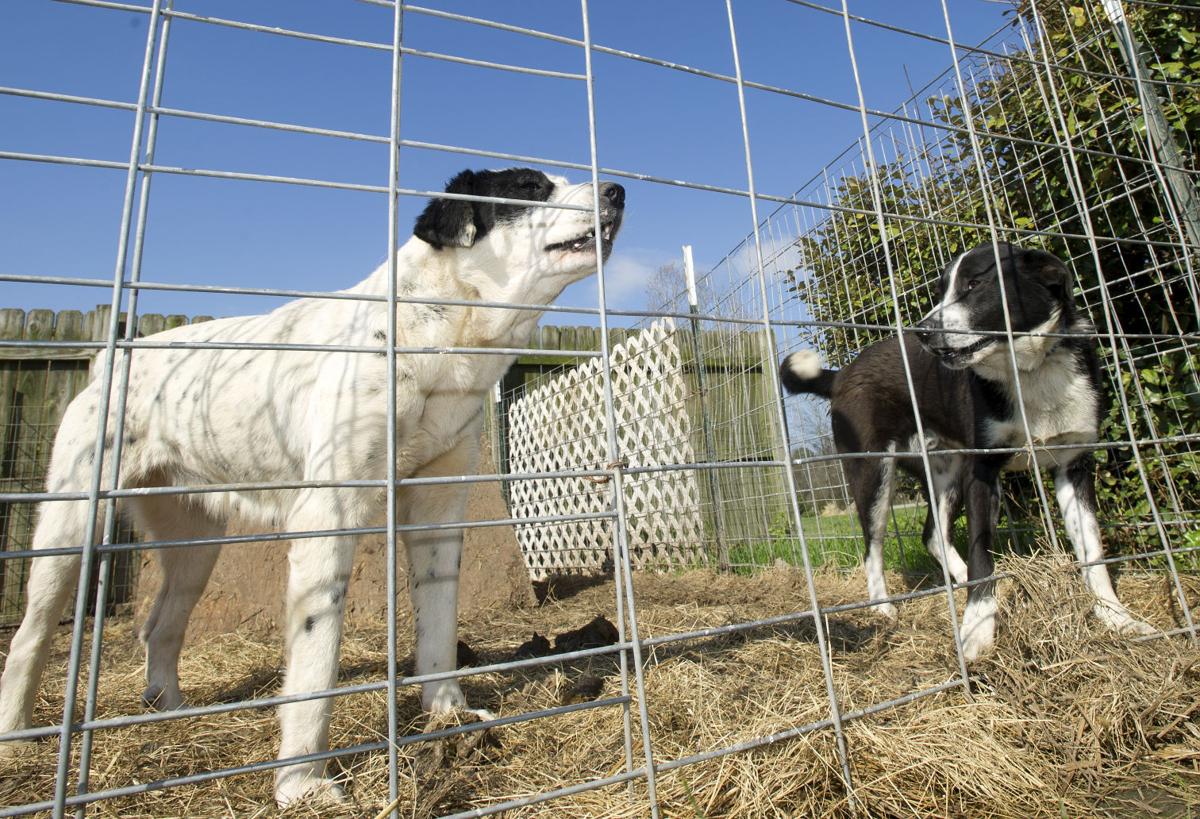 Dogs stand in their pins at the Animal Rescue Shelter of Lawrence County. 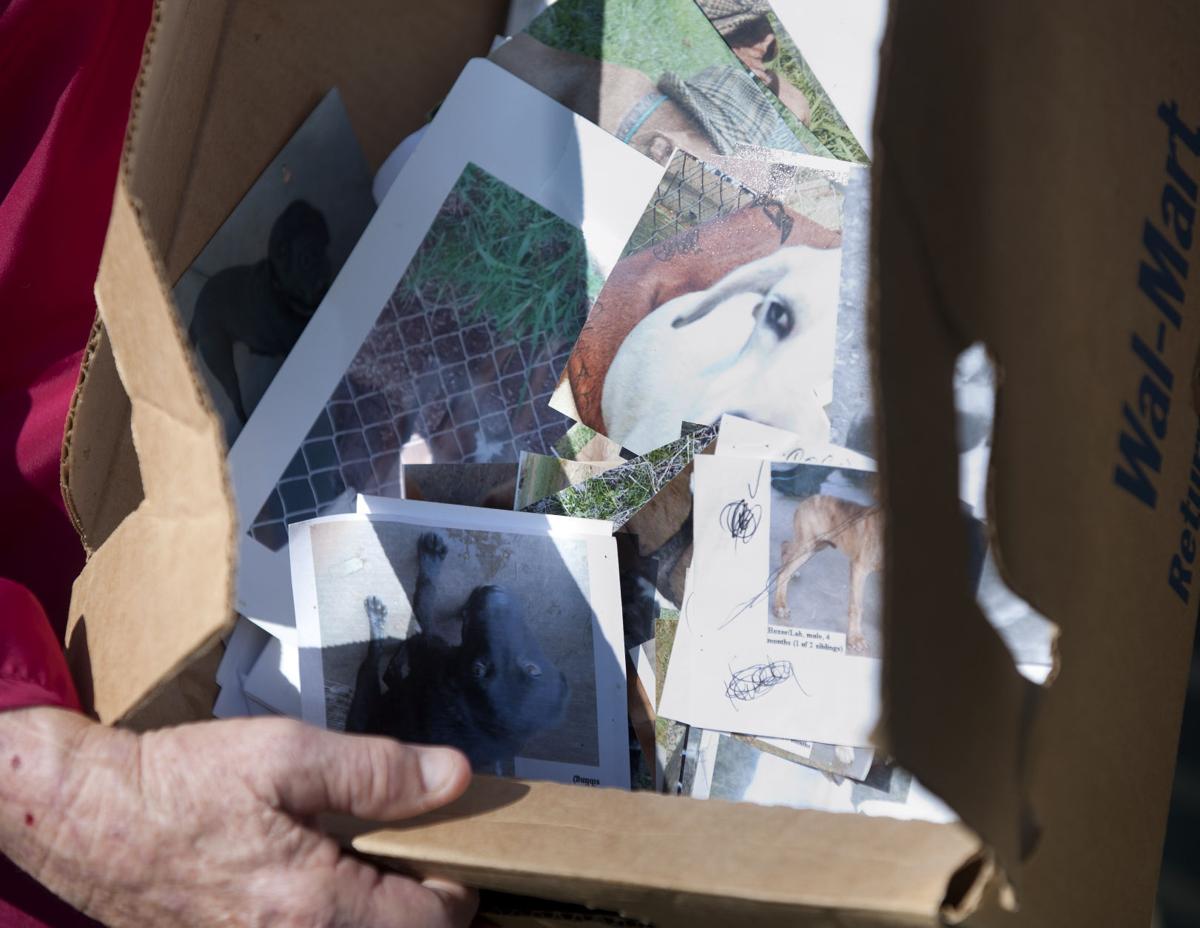 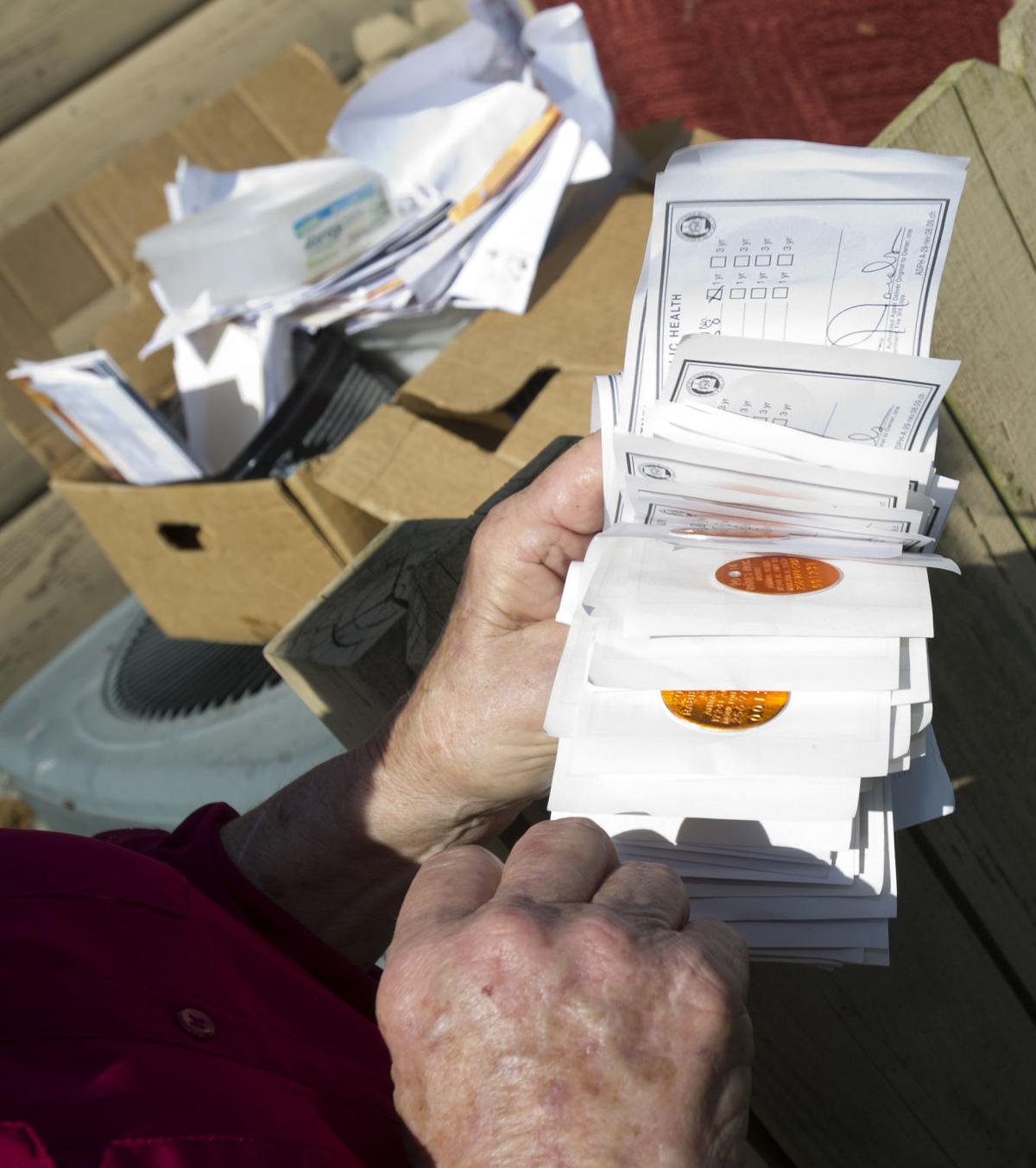 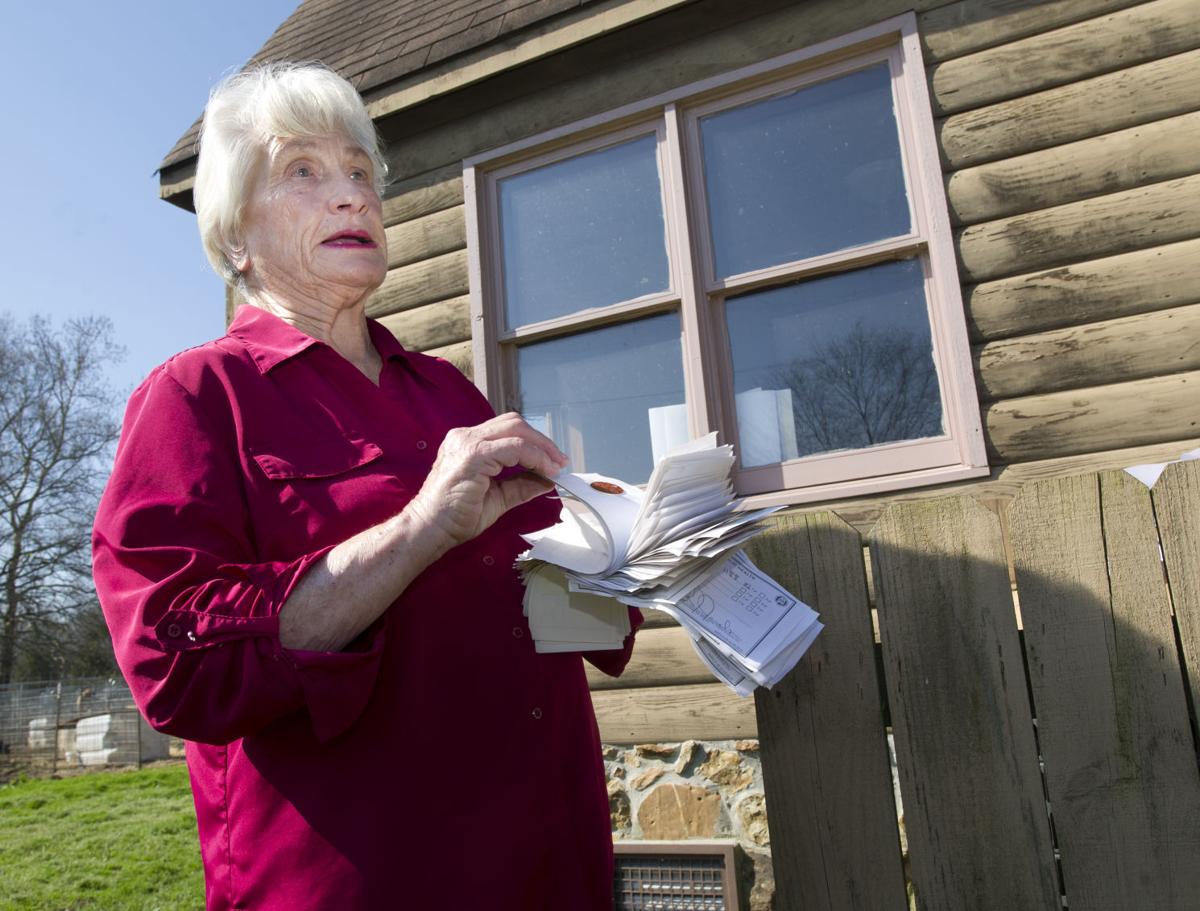 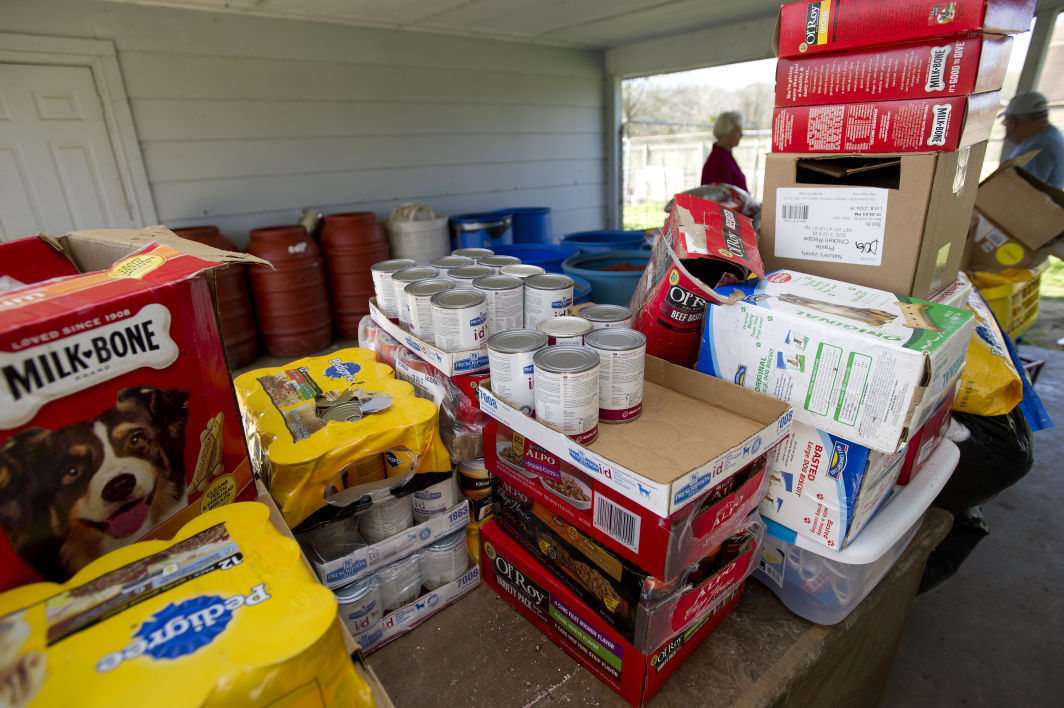 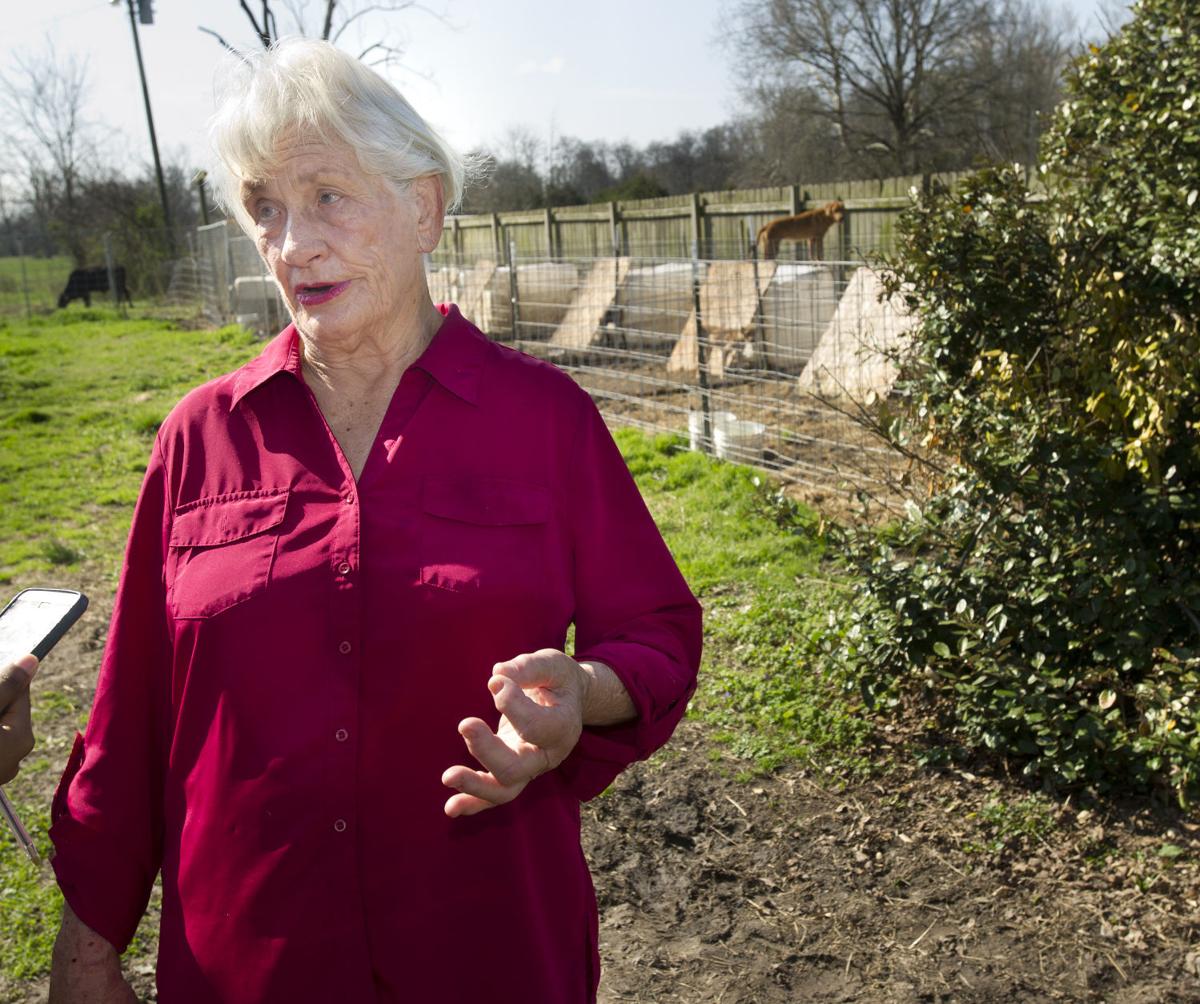 Above: A dog stands on a kennel while another looks past a chain-link fence Wednesday at the Animal Rescue Shelter of Lawrence County. Below: Owner Bobbie Taylor gives a tour of the site.

A puppy drinks from a bucket of water at the Animal Rescue Shelter of Lawrence County.

Dogs stand in their pins at the Animal Rescue Shelter of Lawrence County.

Several animal rescue agencies from around the state visited Taylor’s residence on Lawrence 170 in Moulton last week to pick up stray animals after seeing pictures of pets living in unsanitary conditions circulating on social media.

The rescuers accuse Taylor of overcrowding. They said they witnessed big dogs kept in small kennels and ill animals in kennels caked with mud and feces.

Taylor, 81, who has been housing stray animals at her home for the county since August 2013, said the accusations are untrue, and the dogs in the pictures aren’t hers.

“I would never do anything to harm an animal,” Taylor said. “I am doing my job.”

Beth McBride, who works with One At A Time Animal Rescue near Prattville, traveled to Taylor’s residence March 16 and said she counted 201 dogs and 60 cats. McBride alleges some of the dogs had skin diseases and the cats had herpes and ringworm.

McBride said the dogs were standing on top of their cages because the ground was mixed with mud and feces. McBride said there was a dog that was put down because it had a broken jaw and an infected skull fracture.

“It makes my heart break,” McBride said. “It affected me so bad after being there for a couple of hours. I can only imagine having to live in that.”

Taylor said she walks through her shelter every night to make sure the animals’ beds are dry. She said her three full-time workers use the 20 bales of hay a week she purchases to change out the hay in the kennels every week.

Animal Control Officer Murphy DeJoya, who works part-time at the shelter, said he takes about 70 animals a month to the shelter. He said some come to Taylor’s place in bad condition. He said he has seen plenty of dogs with matted fur, infected with worms or suffering from major injuries.

“We get anything from extremely healthy to unhealthy here,” Murphy said.

Taylor said she has 163 animals on her property, which she said is double what she usually has. She said she usually transports 30 to 60 animals weekly to other no-kill shelters around the United States to keep numbers low, but the weather interfered.

Shelter volunteer Gene Hart, who transports animals from the Animal Rescue Shelter to other no-kill shelters around the U.S., said transporting was at a standstill because of wintry road conditions.

The last transport was in mid-February to take 67 dogs to a shelter in Wisconsin. On his way back to Alabama, Hart said, he became stuck in Kentucky because of snow-related traffic delays.

Taylor said she plans to transport 20 to 30 dogs twice a week to get the population back to normal.

Paula Boschung, a rescuer with K9 Rescue of Alabama in Birmingham, said she and three other volunteers went to the shelter March 18 to scan the dogs for microchips, which harness all the dogs’ health and owner information.

Boschung said when she went up to the property, she was greeted by two volunteers who were covered in mud. She said she saw large dogs in small cages.

“They all looked sickly and weak in the eyes like they didn’t feel good,” Boschung said.

She said Taylor asked her to leave the property after claiming she was being attacked as an “animal hoarder” on Facebook.

Workers at Jacobs Animal Clinic in Moulton said Taylor provides veterinarian services for her pets weekly. Taylor presented about $3,000 worth of receipts for rabies shots and other vaccinations when The Decatur Daily visited the property Wednesday.

The Lawrence County Commission approved an $80,000 annual animal-services contract with Taylor in January. In order to get the funds, she has to be in a new facility within the next five months.

Taylor said she is on track to open a new 4-acre no-kill animal shelter off Alabama 24. She said she wants to place the property in trust for the county, so it cannot be sold. She said she believes other agencies want to sabotage her contract with the county.

“It’s politics,” Taylor said. “They have these women calling the newspapers trying to get me shut down.”

Rose Bauer, a filmmaker who is making a documentary about Taylor’s shelter, said animal shelters in surrounding areas have not been supportive of Taylor’s shelter. When the shelter hosted a fundraiser in Moulton in May, Bauer said, only 20 people showed up and none of them were from other animal organizations.

“We invited all the shelters in the surrounding area,” Bauer said. “We did everything we could to help Bobby raise money for the animals and hardly anybody showed up. So what does that tell you?” Bauer said. “But suddenly she gets the ($80,000) contract and suddenly evil comes out of the woodwork.”

Commissioner Bradley Cross, who pushed for the contract, visited the property after he heard the allegations.

Cross said he was pleased with what he saw.

“The weather — the snow and all the rain — has got it in a bad situation, but she can’t help that because she wasn’t able to move all the dogs,” Cross said. “She takes good care of them. She has the fattest dogs I have ever seen in those conditions.”

Commissioner Norman Pool, who also voted for the contract, said he has not visited Taylor’s site. He said he is waiting until Taylor gets the new site completed.

“I can’t tell you what she’s done or hasn’t done because I don’t know, but the whole story is that she has six months to get stuff together,” Pool said.

Taylor said she will be at the next commission meeting on April 10 to update them on the new animal shelter, which is scheduled to open in May. She said she will be conducting a daily count of how many dogs are in the new shelter in response to the allegations.

“This is bigger than me,” Taylor said. “This is why dogs are killed all across America, because conflict stops you from working to save animals. All the rescue groups need to be working together.”

Ms. Taylor seems to be doing a good job on a limited budget.

She does not have the luxury of picking and choosing what animals wind up at her door step like some private groups have.

If the people complaining from outside Lawrence County think they can do a better job - then knock yourself out. No one is stopping you. Put that on Facebook.