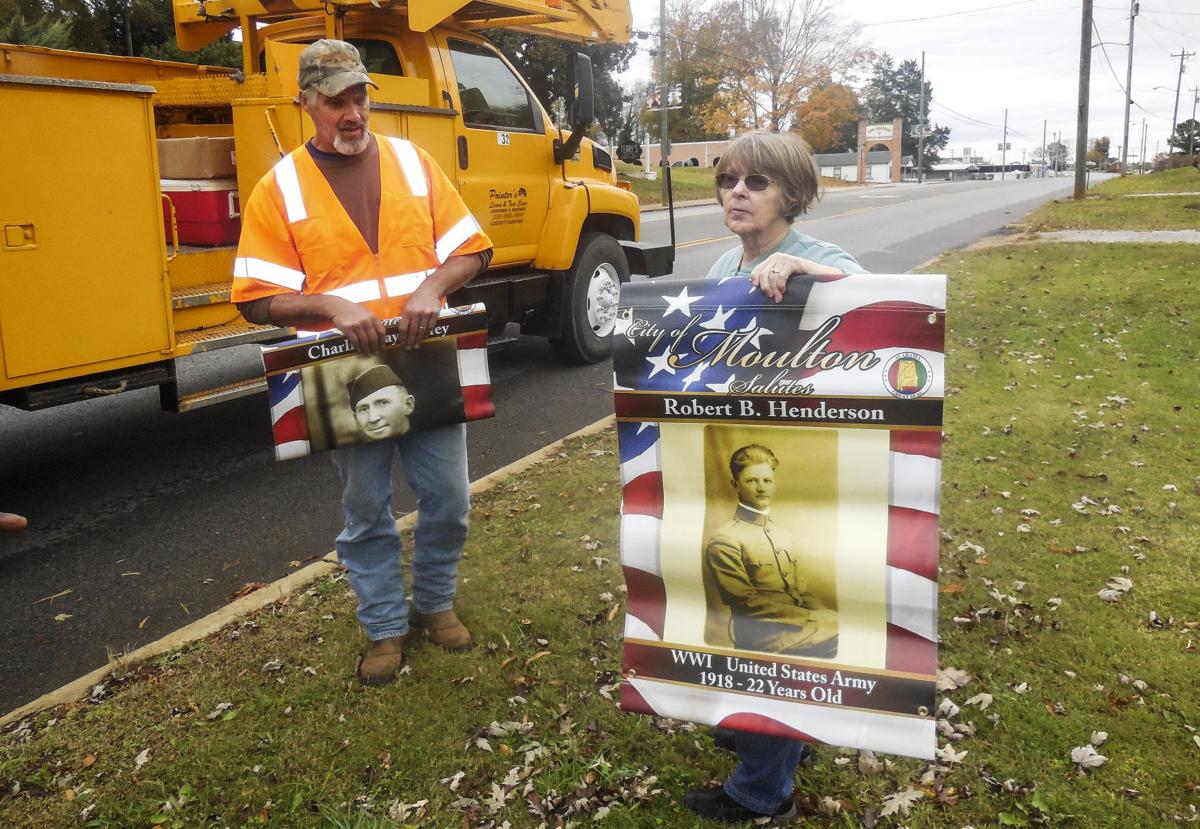 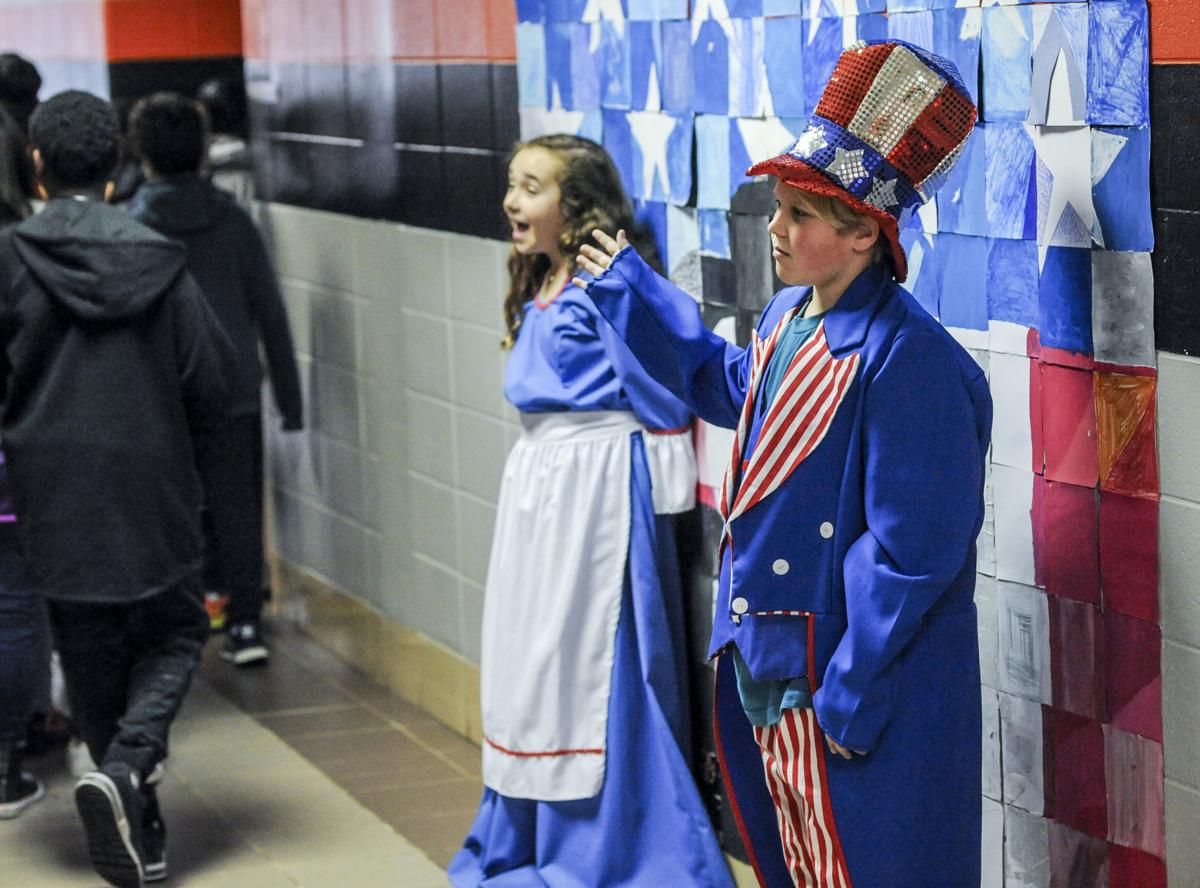 MOULTON — Banners honoring veterans line the streets of Moulton as the town gears up for its second annual Veterans Day parade Saturday.

This year, she said, the parade Saturday at 4 p.m. will be larger and with more red, white and blue in downtown Moulton.

“The veterans parade is a labor of love that came about almost by accident,” said the longtime Moulton resident, historian and parade organizer.

“Joyce Cole and her husband Curtis saw veterans banners along the street poles in Double Springs last year, and they brought the idea to Moulton. Their promotion and the formation of the Lawrence County History and Preservation Society have made the banner program a huge success this year.”

Collis Pointer, owner of Pointer’s Lawn and Tree Care business in Moulton, is donating his time this week to put up the 129 veterans banners, each honoring a named veteran. “I thought we might have 50 banners, but Joyce did a good job getting the word out. I thought it might take me a couple of days to put them up, but 129 will take me the entire week.”

Pointer said he was out until 1 a.m. Thursday putting up some of the banners because of rainy weather Wednesday.

He is also paying his helper Bryan Retherford for the week.

He said he expects to have the banners up by this afternoon.

"City Hall, the archives and I have probably had 20 calls from people wanting to get a banner for their loved ones, but the deadline has passed," Joyce Cole said.

The banners were $105 each, and the deadline was Oct. 1. Cole said the banners should be on display until about Thanksgiving, and she plans for them to go back up next Memorial Day and stay up through the July 4 celebrations.

Linda Peebles, a member of the Courtland Community Revitalization Committee and the preservation society, said there's a movement to have veterans banners displayed on Courtland's square.

"When people see how patriotic the banners look hanging up throughout Moulton, they'll get emotional and want their loved ones remembered, too," Peebles said. "I'd like to see Courtland get involved in a similar project."

She said the banners would be a nice addition to town's Wings of Courtland military celebration in April.

Gillespie said she has received strong support from the Lawrence County American Legion and VFW posts with the parade and activities that follow.

“This really is all about them, and for them, so it was important they were involved,” she said. “Their willingness and assistance to work made the parade possible.”

Gillespie said Lawrence County archivist Wendy Hazle was instrumental in finding articles and photographs of county veterans. She said a video will be shown following the parade.

“Grand Marshal Ed Young, 97, of Mount Hope will give a short talk and we’ll have a candlelight ceremony for the veterans, too,” Gillespie said.

She said musical entertainment will be provided by The Cross Ties.

She said military veterans wanting to participate in the parade should have a sign on their vehicle stating their name, branch of service and when they served. She said the vehicles should also have some patriotic bunting, flags or crepe paper décor.

9 a.m. and 11 a.m. — Hartselle’s tribute to veterans will start at 9 a.m. with exhibits on Railroad Street and a program at 10 a.m. The parade will begin at 11 a.m. and go down Main Street. The Morgan County Cattlemen’s Association will provide free hot dogs.

9 a.m. — In Danville, a Veterans Day 5K will raise funds for the Wounded Warrior Project. The 5K and 1-mile races will begin at Danville Baptist, 5911 Alabama 36. Registration costs $25.

4 p.m. — Moulton’s parade will be downtown. Following the parade, a candlelight ceremony will take place at the Lawrence County Courthouse with performances by the Pleasant Grove Baptist children’s Choir, The Cross Ties, Maggie Shelton, Mike Owens and Brett Anderson.

2 p.m. — The Combined Patriotic Organizations of Morgan County will hold a parade and ceremony in Priceville. The parade will begin at 2 p.m. at Bethel Road and end at the Morgan County Veterans Memorial, where a ceremony will take place at 3 p.m.

2 p.m. — The Decatur Public Library will hold “Over There,” and event recognizing Morgan County World War I soldiers who received memorial certificates from France.