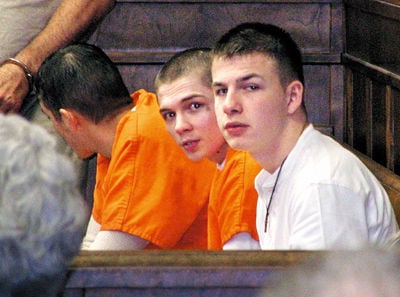 Evan Miller, foreground, and Colby Smith, wait for a jailer to take them back to the lockup after a 2006 court hearing in Moulton. [DECATUR DAILY FILE] 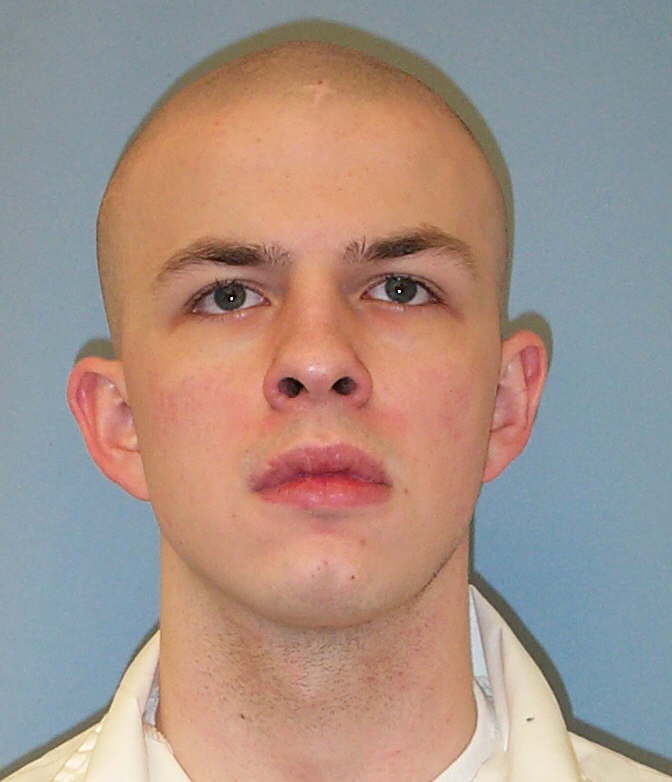 A sentencing hearing has been scheduled for March 13 in Lawrence County for Evan Miller, whose original sentence on a capital murder conviction was overturned by the U.S. Supreme Court and led to sentencing laws being changed for juveniles nationwide.

The Supreme Court in 2012 ordered that Miller be re-sentenced because the state’s only sentencing option for a juvenile convicted of capital murder was life in prison without the chance of parole. A state law adopted last year now gives a judge the option of sentencing a juvenile convicted of capital murder to life in prison with the chance of parole after serving at least 30 years in prison.

Miller, now 28, was convicted of capital murder in 2006 for the 2003 killing of Cole C. Cannon in Cannon’s home in a Five Points mobile home park. Miller, who was 14 when the beating death occurred, is an inmate at St. Clair Correctional Facility in Springville.

Cannon’s daughter, Cindy Cheatham, said she thinks next month’s sentence hearing before a jury will be the the last court proceeding for the Cannon family in the case.

“Even though there is anticipation, it makes me sort of edgy and emotional,” Cheatham said. “I’m ready for it to be over. But it will never really be over.”

Craig, without comment, on Friday denied a defense motion to allow Miller to wear street clothes in front of the jury during the hearing.

Alicia A. D’Addario, an attorney with the Equal Justice Initiative of Alabama representing Miller, had filed a motion for Miller not to wear prison clothes during the hearing because it might signal to the jury that he belongs in prison.

“It is well settled that the trial of a defendant in prison garb jeopardizes the defendant’s due process right to a fair trial, thus the state may not compel a defendant to appear before a jury in identifiable prison or jail clothing,” D’Addario said in the motion.

When Miller was sentenced in 2006, Circuit Court Judge Philip Reich, who is now retired, sentenced Miller to life in prison without the possibility of parole.

The only sentences allowed by state law at the time for capital murder were the death penalty or life in prison without parole. Reich could not sentence Miller to death because the Supreme Court in 2005 declared the death penalty for defendants younger than age 18 to be unconstitutional.

The Equal Justice Initiative appealed Miller’s sentence to the Supreme Court, which voted 5-4 that the state must have another sentencing option available for juveniles in a capital case other than life without parole. The court sent the case back to Lawrence County for re-sentencing.

The new state law that a juvenile can be eligible for parole after 30 years does not preclude a judge from sentencing a juvenile capital murder defendant to life in prison without parole.

The Alabama Attorney General’s Office is prosecuting the sentencing phase. Lawrence County District Attorney Errek Jett recused himself because he was Miller’s defense attorney at the original trial.