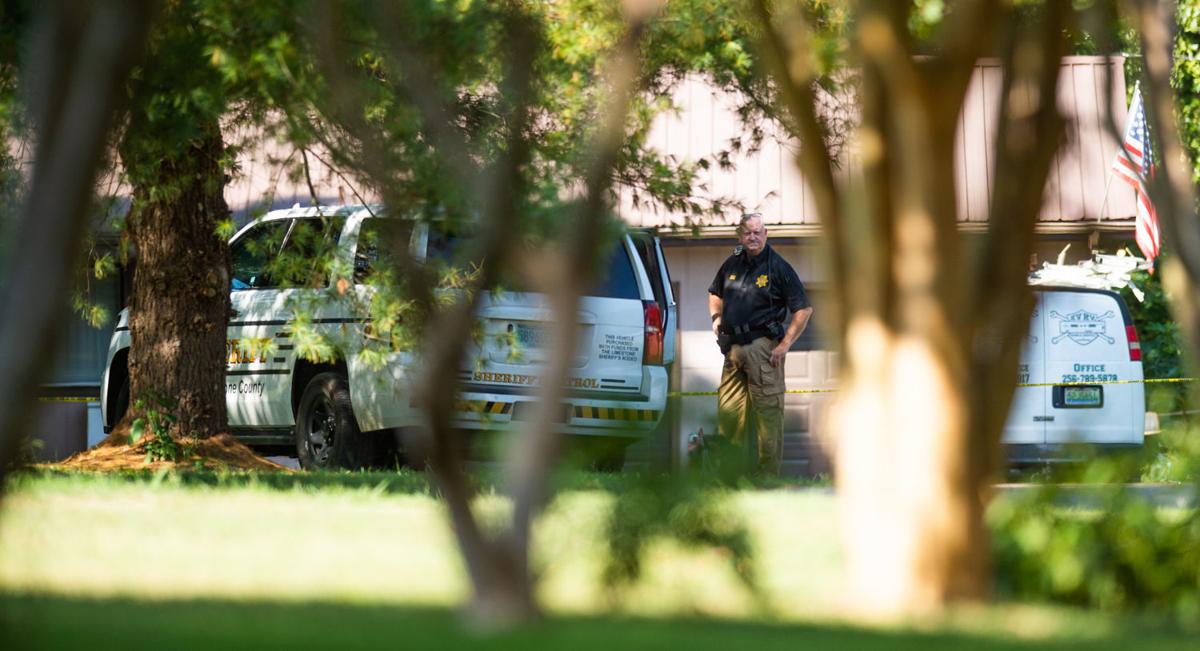 Limestone County deputies work the scene of a shooting at 25019 Ridge Road in Elkmont that left five family members dead. Sheriff's Office spokesman Stephen Young said it was a "tragedy of a scale that we're not used to here in Limestone County, Alabama." More photos at decaturdaily.com. [DAN BUSEY/DECATUR DAILY] 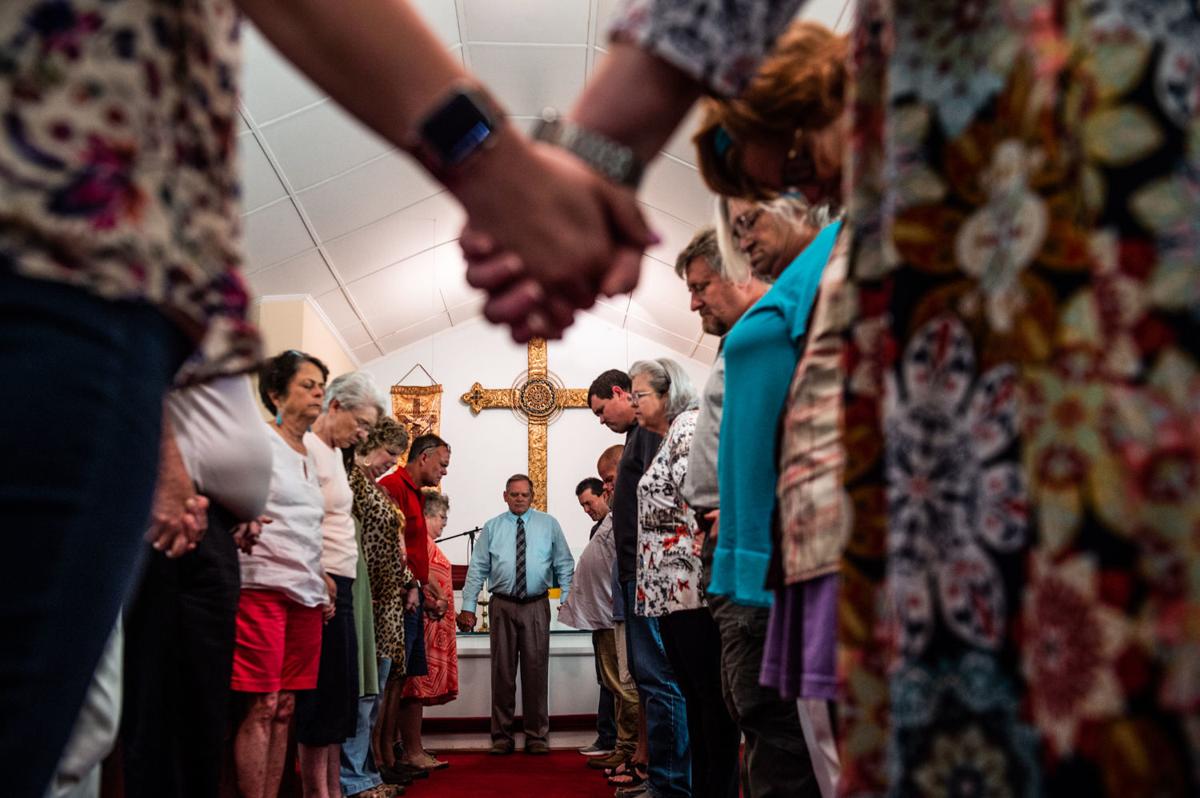 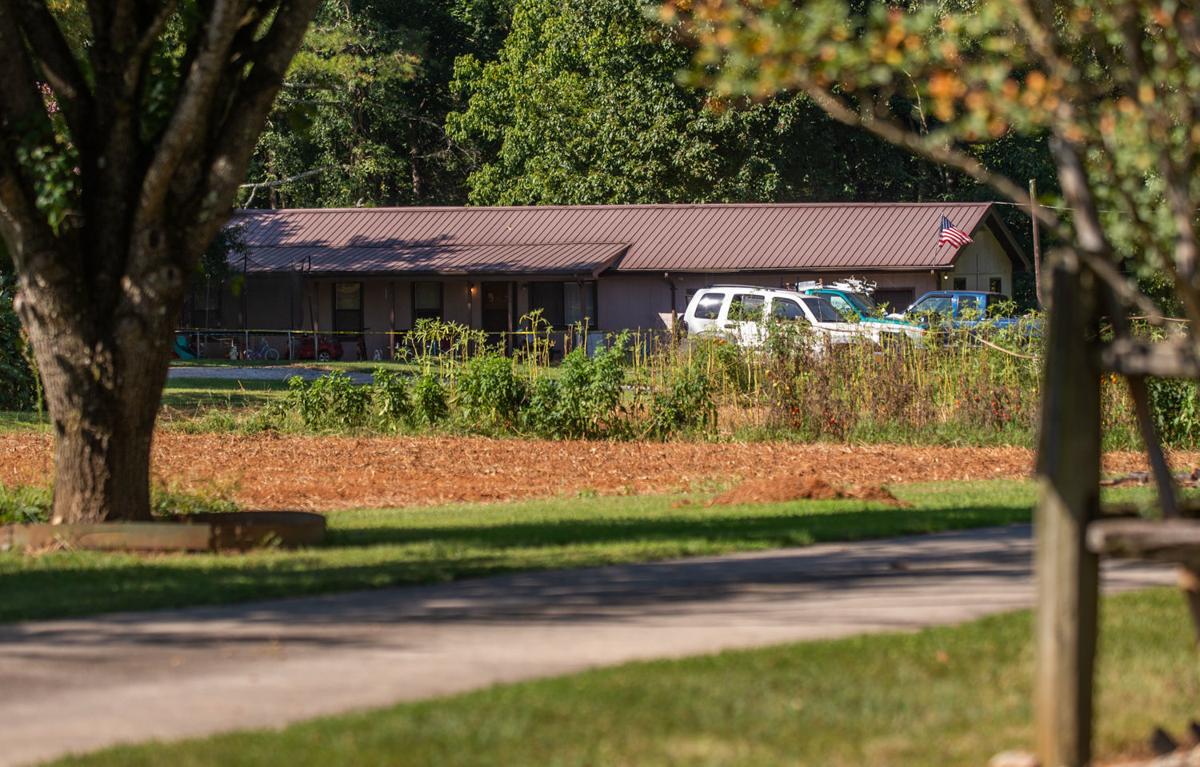 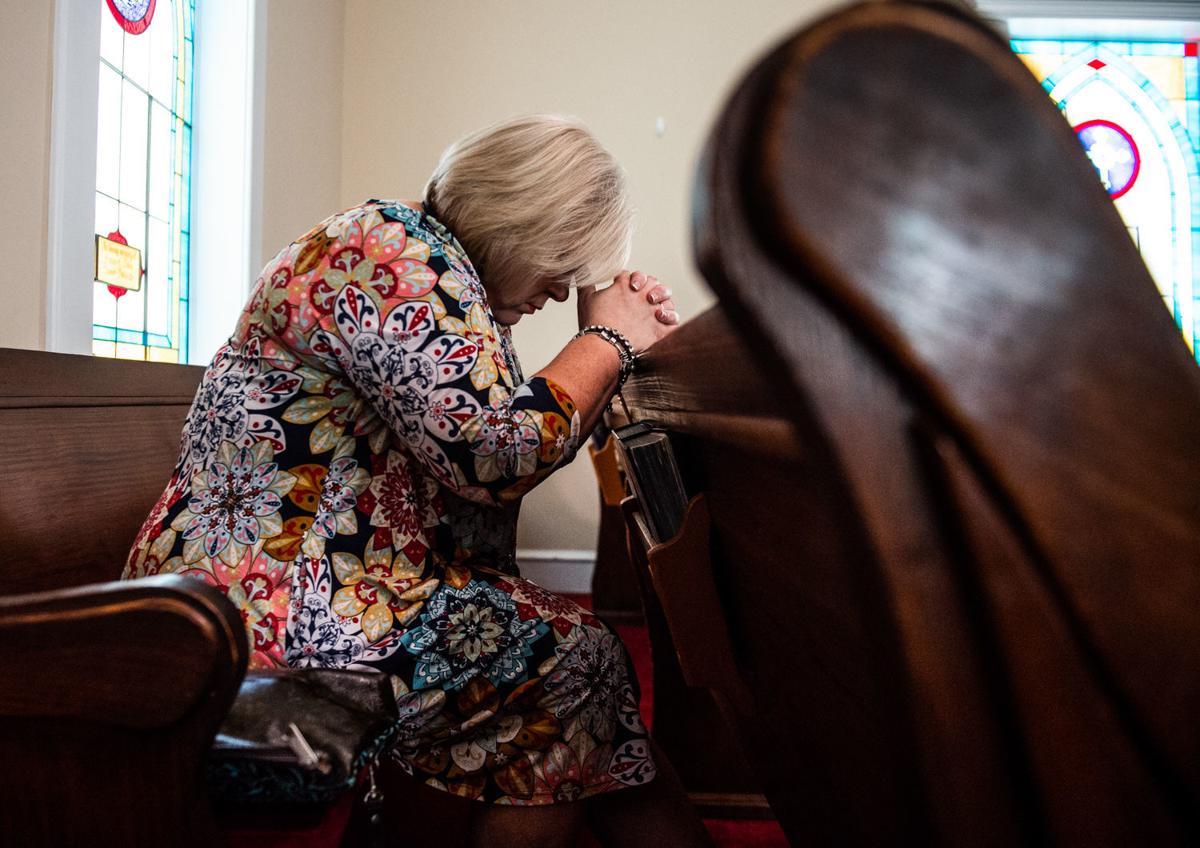 Members of the congregation bow their heads in prayer during a prayer vigil, held at noon on Tuesday, at Elkmont United Methodist Church. [DAN BUSEY/DECATUR DAILY] 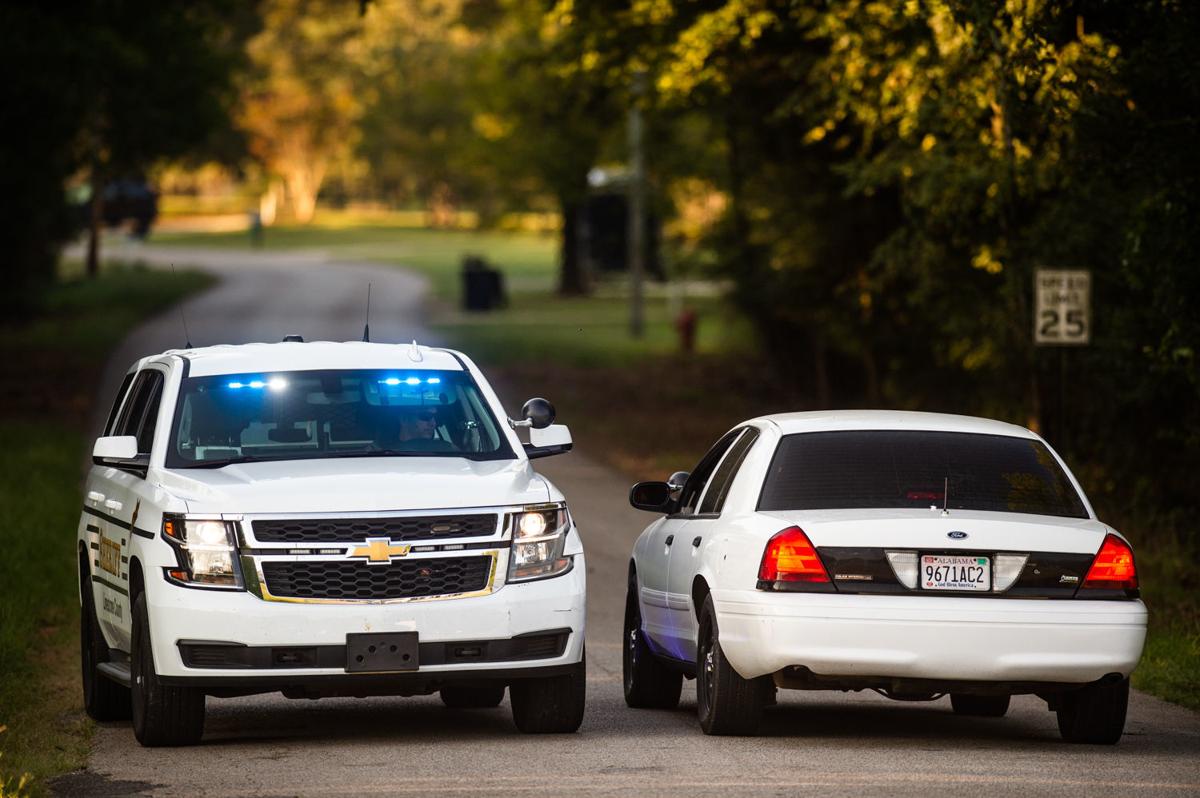 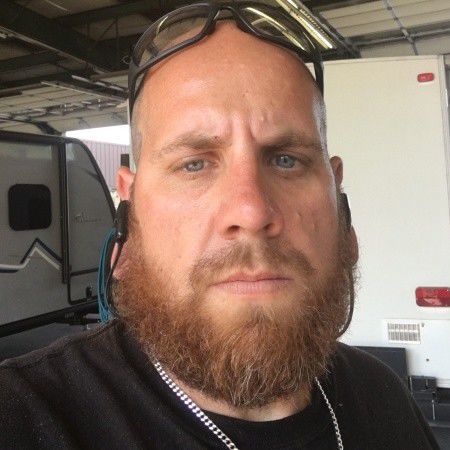 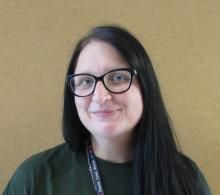 Limestone County deputies work the scene of a shooting at 25019 Ridge Road in Elkmont that left five family members dead. Sheriff's Office spokesman Stephen Young said it was a "tragedy of a scale that we're not used to here in Limestone County, Alabama." More photos at decaturdaily.com. [DAN BUSEY/DECATUR DAILY]

Members of the congregation bow their heads in prayer during a prayer vigil, held at noon on Tuesday, at Elkmont United Methodist Church. [DAN BUSEY/DECATUR DAILY]

ELKMONT — A 14-year-old Elkmont boy on Monday night killed his five family members, ranging in age from 6 months to 38 years, and confessed to the shootings, according to the Limestone County Sheriff's Office.

The victims, according to Limestone County sheriff's spokesman Stephen Young, were the shooter's father John Wayne Sisk, 38; his stepmother Mary Sisk, 35; his 6-year-old brother; his 5-year-old sister; and his 6-month-old brother.

"This is devastating," Elkmont Mayor Tracy Compton said Tuesday morning. "There were less than 500 people in the last census that lived in Elkmont, and five of those are not with us anymore. ... We’ve never had anything like this happen in Elkmont."

The teen is charged with five counts of juvenile murder and is being held in a juvenile detention facility.

"Pending the adjudication process, (he) could face adult charges of multiple counts of murder and/or capital murder," Young said at a press conference Tuesday afternoon.

The handgun was in the residence illegally, Young said at the press conference, but did not elaborate. He did not respond to phone calls or emails.

Limestone County Coroner Mike West said he pronounced three of the victims dead at the scene. The other two victims, an adult and a juvenile, were initially in critical condition and were airlifted to Huntsville Hospital and Children's of Alabama in Birmingham, the Sheriff's Office said, but later died.

The shooting took place at the family's residence, 25019 Ridge Road, which is near the Elkmont Volunteer Fire Department. A Limestone County Sheriff's Office incident log first references the shooting at 10:55 p.m. Monday.

Young said the 14-year-old called 911 to report the shooting.

"He met deputies in the driveway and told them that he had been in the basement of the home and heard gun shots from the main level of the home upstairs," Young said, but investigators noticed discrepancies in his story.

"Upon being confronted with some of the inconsistencies, he did admit to shooting the five family members," Young said.

All five victims lived with the alleged shooter in the residence. According to court records, the family had resided at the address since at least April 2016.

The 14-year-old assisted investigators in finding the 9 mm handgun on the side of a nearby road where he had tossed it, Young said.

The mayor said he lives within 1,000 feet of the residence where the shooting took place, which he said is a rental property. He said the residential neighborhood has few renters, with lot sizes of 1 to 2 acres.

"The last time I saw (the shooter) he was on a mini-bike a couple of years ago, riding up and down the road with a little Army hat on," Compton said.

Karen Tucker, Limestone County Schools’ director of technology and public relations, said at the press conference Tuesday that "we're concentrating our efforts on assisting the students and the faculties as well as the community in dealing with this tragedy."

She said additional counselors from inside and outside the school system were at the schools Tuesday.

Young said it was a "tragedy of a scale that we're not used to here in Limestone County, Alabama."

"He was a great guy, a great employee," Hackett said. "I've known him and his whole family for several years. I loved him like a brother, and he'll be severely missed. That comes from everybody that works here."

He said he knew John Sisk's 14-year-old son and saw no warning signs. "I'm shocked," Hackett said. "I've worked around his son, too. I knew them all and never would have thought it."

Mary Sisk was a seventh grade special education teacher at Huntsville City Schools. According to her biography on the Mountain Gap Schools website, "I am happily married with a great husband and four beautiful children. I am originally from New Orleans and really miss the food!"

She had certifications in special education, mental retardation and learning disabilities.

"We are heartbroken to learn of the tragedy involving one of our teachers, Mary Sisk, and her family. Our thoughts and prayers go out to the Sisk family and we ask everyone to remember them during this difficult time," said Keith Ward, director of communications for Huntsville City Schools, in a statement.

The mass killing is the 26th in the United States this year, based on the methodology of The Associated Press/USA TODAY/Northeastern University mass murder database, which tracks homicides where four or more people are killed, not including the offender.

Compton said he does not view stricter gun laws as a solution.

"We are grieving here in Elkmont, and we want people to know that this family is in our thoughts and prayers."

Residents of the Elkmont area were stunned to learn of the shootings.

Karen Erwin, who has lived on Ridge Road across the street from the Sisk family for about a year, was drifting off to sleep when she was awakened early Tuesday by a helicopter flying overhead.

“It’s a quiet neighborhood,” said Erwin, who didn’t know any of the family members. “I hate this. I hate this.”

Clara Crawford, who lives near Elkmont, came to Elkmont United Methodist Church at noon Tuesday to join others to pray for those affected by the deaths.

“It’s heart-breaking,” said Crawford. “My mind is like everybody else’s, it’s reeling.”

She was immediately concerned about a friend from her church, Sandlin Road Church of Christ, who lives on Ridge Road, then her thoughts turned to the young suspect.

“The family is in God’s hands,” she said. “He’s got to live with this for the rest of his life.”

The Rev. Thomas Porter, the senior pastor of Elkmont United Methodist, told about 30 people who were gathered at the vigil that the church was open Tuesday for prayer and counseling.

“It’s important for us to come together in prayer to start the healing process,” said Porter, a retired Air Force chaplain. “As small as this community is, I didn’t know the Sisk family, and that hurts.”

“Every tragedy opens the door for you to demonstrate and exercise your faith,” said Mitch McCormick, pastor of New Bethel Baptist Church, one of several ministers who spoke or prayed at the vigil. He called on people to “open your eyes” for opportunities to be of service to others.

Regina Emerson, the director of the nearby Elkmont Senior Center, was shocked by the incident.

“It’s very, very sad in our community because it’s such a quiet little town,” she said. “It kind of scares me because I have grandchildren and I have children in this area.

“Too many young teenagers can get a hold of guns now.”

Dennis Scott, the operations manager of Belle Chevre Cheese Shop in Elkmont for the last five years, said he’s seen many positive changes in the town over the years.

Scott said he keeps guns for protection, and “for me, it’s hard to say” whether tighter gun restrictions are an answer to gun violence.