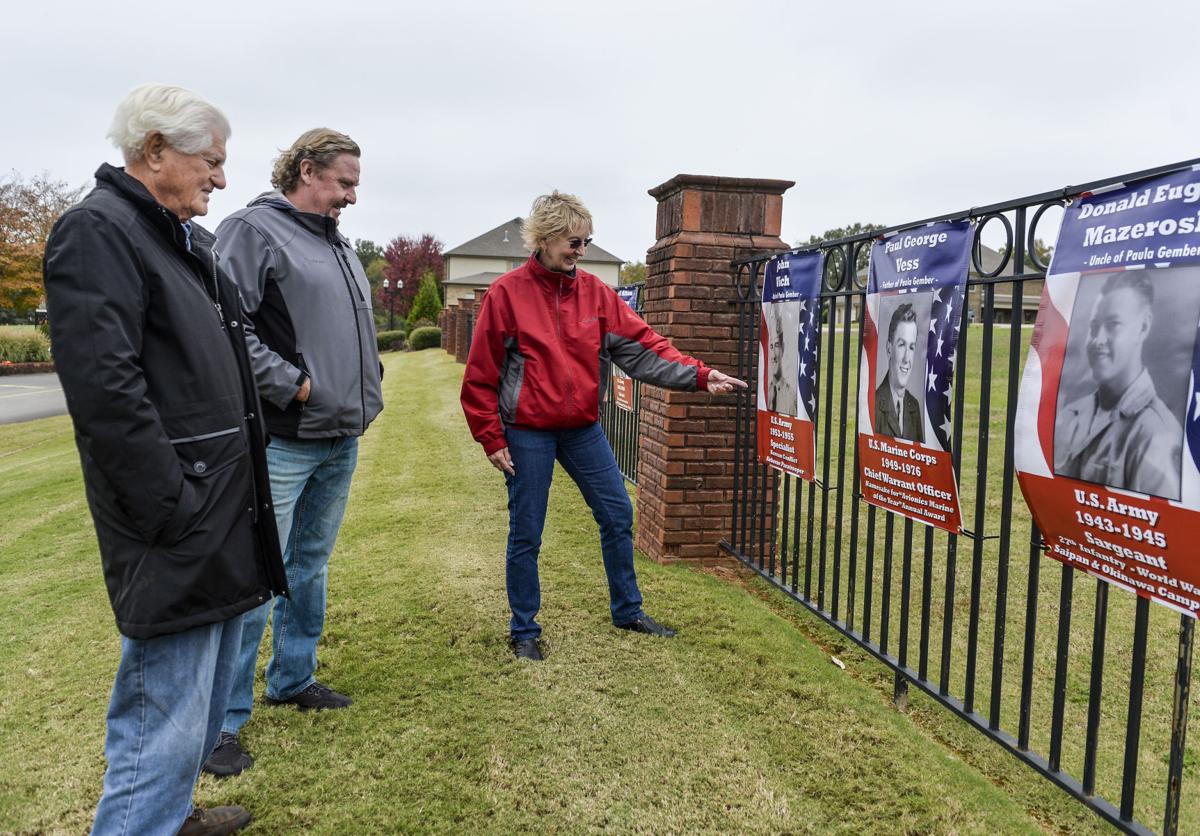 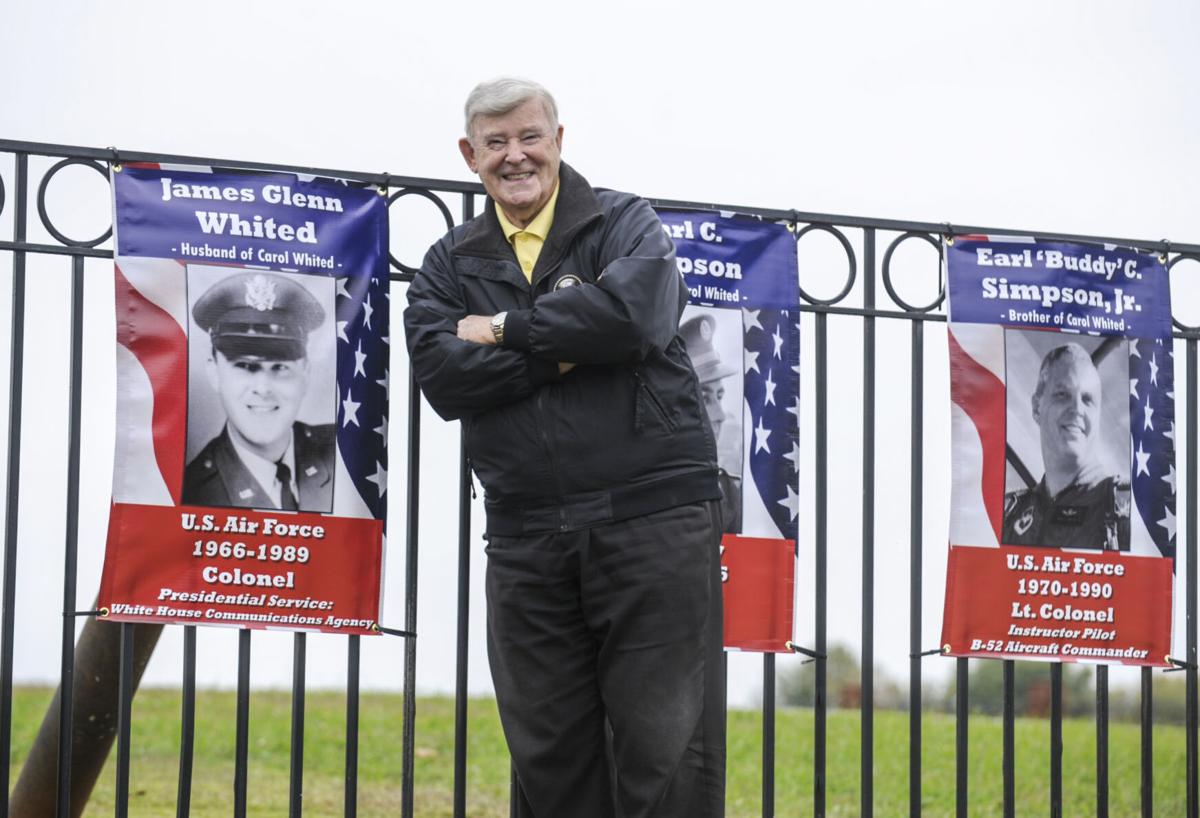 Glenn Whited, a retired Air Force colonel and Brigadoon Village resident, poses Thursday next to his banner, which is part of a Veterans Day display along the neighborhood's fence. [JERONIMO NISA/DECATUR DAILY] 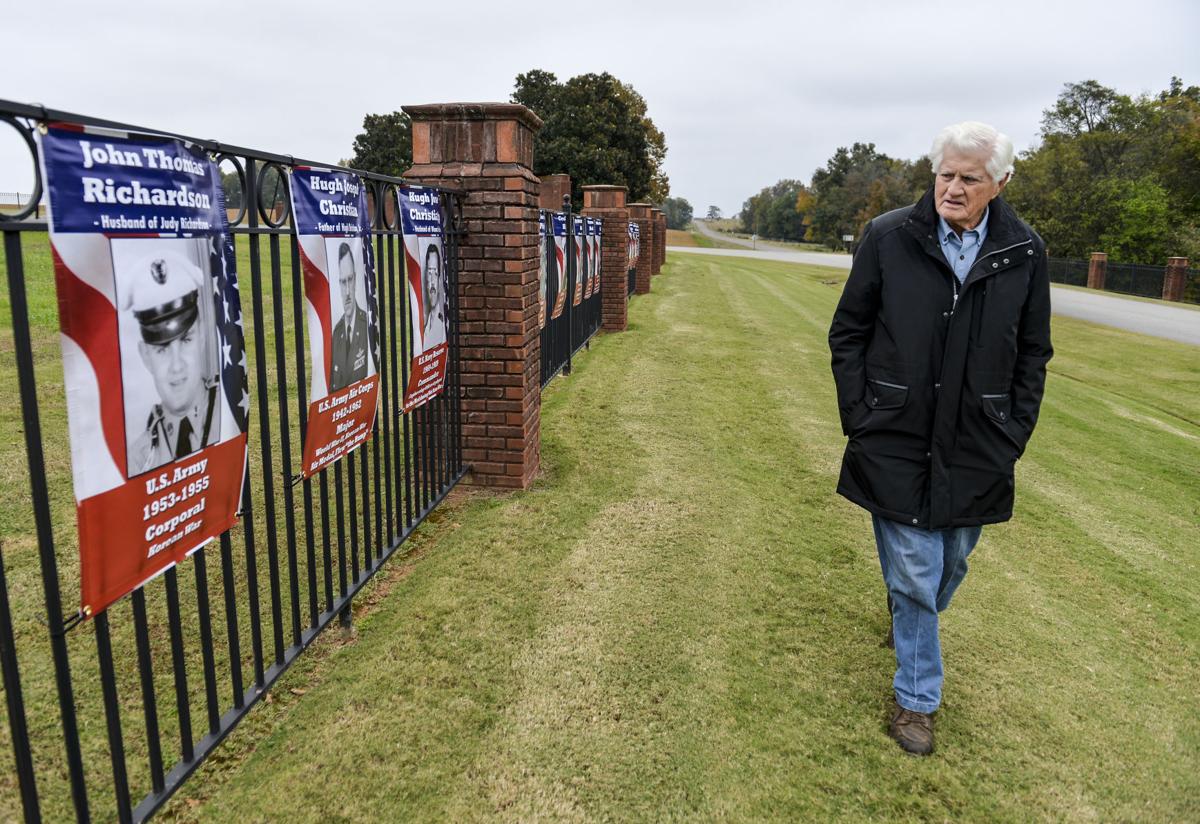 Military veteran and Brigadoon Village resident Tom Richardson walks Thursday past the banner with his photograph, which is part of a Veterans Day display along the neighborhood's fence. Video at decaturdaily.com. [JERONIMO NISA/DECATUR DAILY]

Glenn Whited, a retired Air Force colonel and Brigadoon Village resident, poses Thursday next to his banner, which is part of a Veterans Day display along the neighborhood's fence. [JERONIMO NISA/DECATUR DAILY]

Military veteran and Brigadoon Village resident Tom Richardson walks Thursday past the banner with his photograph, which is part of a Veterans Day display along the neighborhood's fence. Video at decaturdaily.com. [JERONIMO NISA/DECATUR DAILY]

Sam Holloway served 28 years in the Army, was a brigade commander in Desert Storm and Iraq and retired as a colonel, according to his wife, Lynn.

“He was actually born into the Army,” she said of her husband following the footsteps of his father, who also served in the Army.

She said Sam Holloway was proud of his military service and didn't do it for recognition, but he and other former or active duty military personnel are being honored at the Brigadoon Village subdivision in Limestone County.

Paula Gember, who lives in the neighborhood and is a member of its hospitality committee, has organized a tribute as Veterans Day approaches in which 30 banners with pictures of past and present servicemen and women in uniform have been hung on the fence around the neighborhood. The military members either live in the subdivision or have family members living there.

“It was just sparking the idea that veterans are important," Gember said. "And we’ve had so much political turmoil here lately, I thought, let’s go back to honoring what’s made America great and thank our veterans that are past or present, still serving, for their service.”

Gember said her dad was in the Marines Corps for 33 years. She got the banner idea when she heard that her cousin in Cadiz, Ohio, was participating in a similar tribute in which banners hang on light posts in that city.

“I got the idea, wow, we have so many veterans in our neighborhood, including sons who are still serving ... fathers, uncles, great uncles, grandfathers that have passed," Gember said. "So, I thought, we wouldn’t be here or have the freedoms that we have today, if it weren’t for their service."

She designed a banner template and put out word of the project to Brigadoon’s hospitality committee, asking them what they thought about offering the banner opportunity to their residents.

The hospitality committee liked the idea, so Gember got the word out to everyone in the subdivision, which is on Wheeler Lake just west of Athens. People wanting to participate gave Gember a picture and information on the military service.

Gember got a discounted price of $30 per banner at Athens Sign Co. and each resident paid per banner.

Each banner is 2-by-3 feet, and along with their picture, tells the relationship of the military member to the resident of the subdivision, the branch of service, the years that they served, rank and a special attribute, said Gember.

She expects more residents in the subdivision will still come to her for their family member’s banner to be hung with the others.

Lynn Holloway said, “It was a wonderful idea that Paula had, and now that you see the banners up from all the people in the neighborhood, I think it was a really good idea.”

Neighborhood resident Carol Whited said, “It’s wonderful to recognize those that served our country, some of them for a very long period of time and a very difficult time.”

Whited purchased four banners to hang. Her husband and brother were both in the Air Force, and her father and father-in-law both served in the Army during World War II.

Her husband, Glenn Whited, was in communications while her brother, Buddy Simpson, was a pilot and spent 21 years in the service. When the Army found out her father, Earl Simpson, was a musician, they chose him to lead one of the Army band groups, she said. Her father-in-law, James Whited, served in Okinawa.

“When you think what they gave up to serve our country, and all of them were very, very patriotic, and still are,” Carol Whited said. “They still have that feeling of patriotism and doing what you can for the country.”

According to Gember, the banners will be hung for two weeks around Veterans Day, and then for the whole month of May. “That’s military appreciation month. Because it’s V-E Day, Armed Forces Day, and military nurses have a day in there, and then Memorial Day at the end.”

She wants the banner idea to spread.

“My hope is … that other communities will take an initiative on their own and maybe post their veterans along their front entrances, or even hang them on their mailboxes," she said. "Just as a way to say, we are proud of our veterans.

”That’s what I was really hoping would happen. That it would kind of sweep across the county and other communities. ... This was just a starting flame."

Hartselle and Athens will hold parades and ceremonies Saturday in honor of veterans for Veterans Day, officially recognized on Nov. 11.

The Hartselle event will start at 10 a.m. in front of the historic railroad depot, 110 Railroad St. S.W., with a program featuring speaker American Legion Post Commander Michael Ferguson. The parade will begin at 11 a.m.