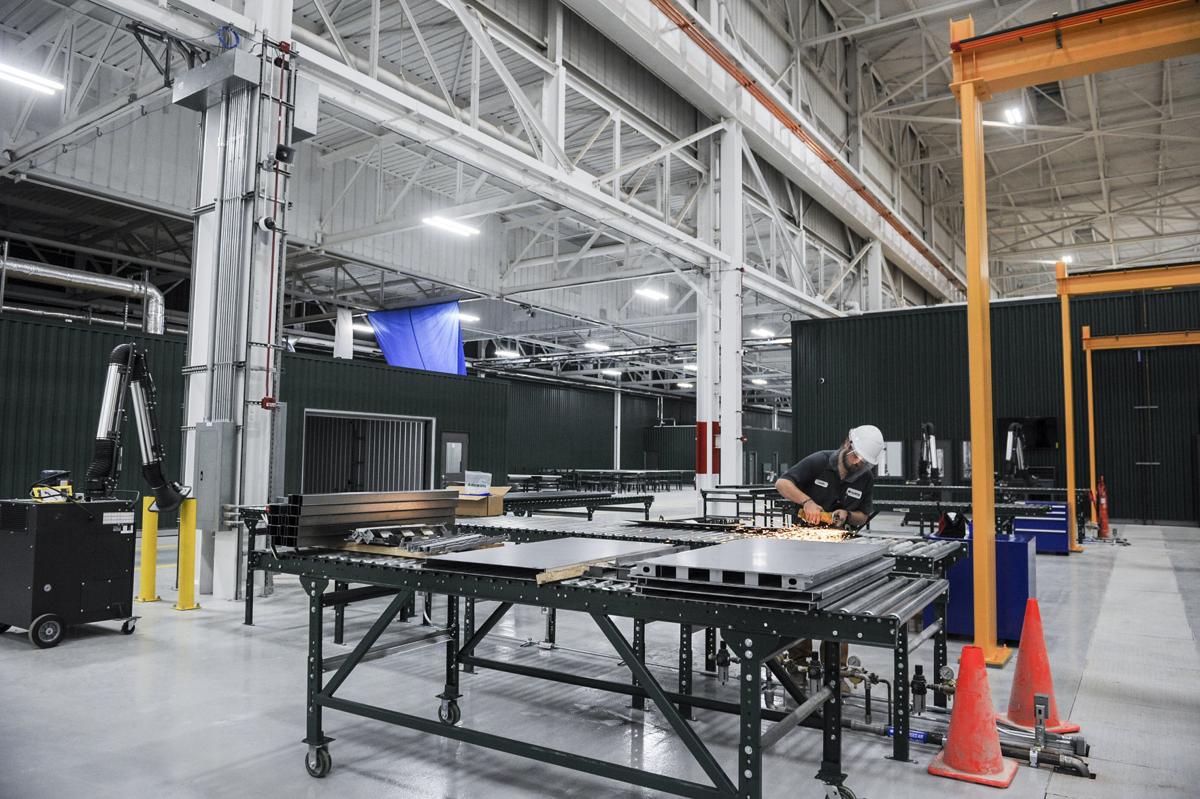 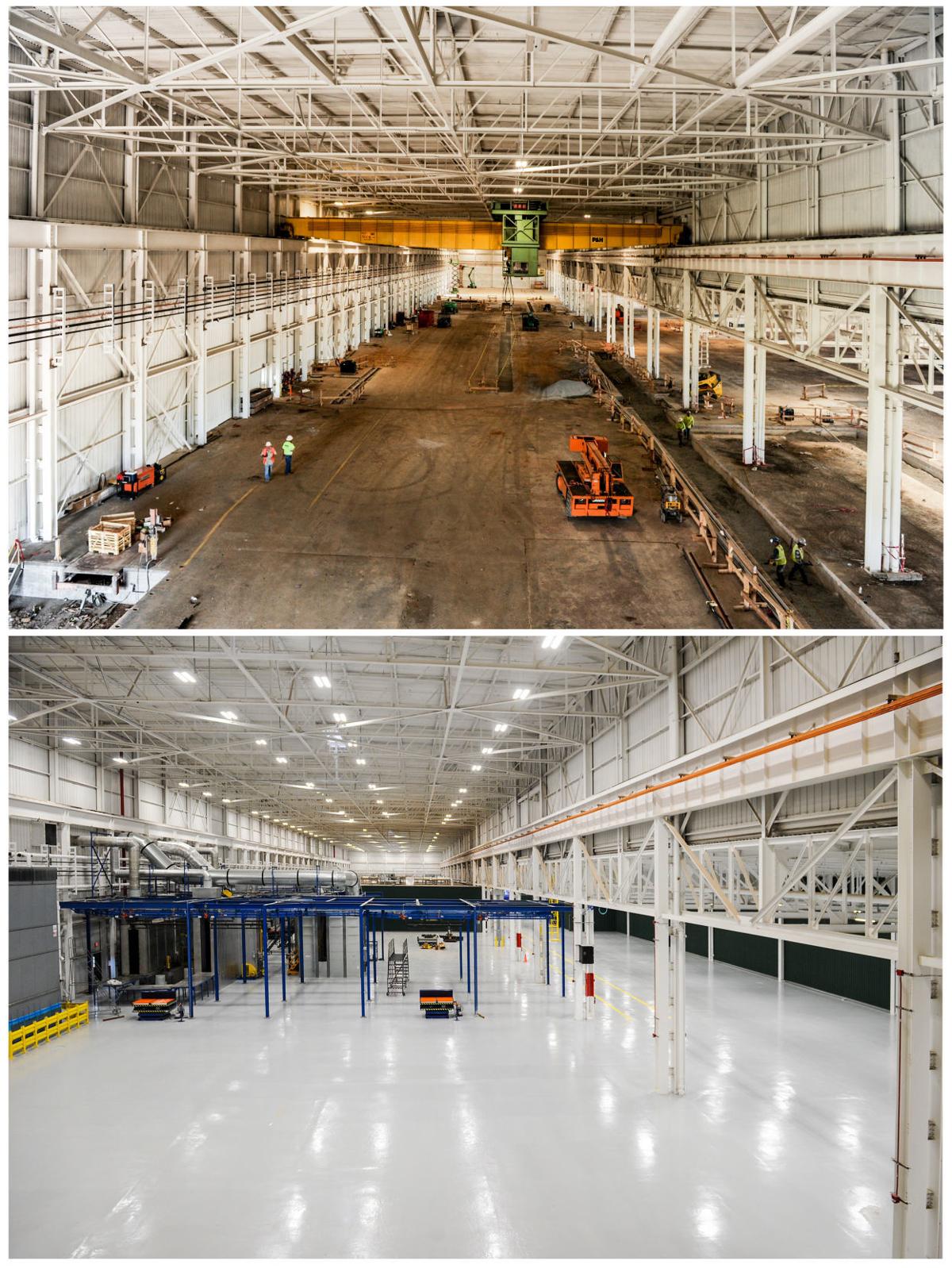 Eight months separate these two images of the new Claborn Manufacturing plant at South Limestone Industrial Park. The top photo shows the interior when it was still under construction in August 2019, and the bottom photo shows progress through Friday. [JERONIMO NISA/DECATUR DAILY]

Eight months separate these two images of the new Claborn Manufacturing plant at South Limestone Industrial Park. The top photo shows the interior when it was still under construction in August 2019, and the bottom photo shows progress through Friday. [JERONIMO NISA/DECATUR DAILY]

A former Delphi auto parts plant building that was vacant for more than 10 years now houses agriculture, construction and manufacturing operations and is part of a new industrial park being developed off U.S. 31.

“It’s a great project,” said Kerrick Whisenant, the general manager of Limestone Building Group, the designer, builder and manager of South Limestone Industrial Park. The first and second phases — renovating the former Delphi Building No. 21 and building a 7,200-square-foot addition on the west side of the structure — are complete.

“We were so far along (with those phases) that we didn’t get hit” by the pandemic, he said. “We already had tenants moved in.”

The park is located on Sandy Road, across U.S. 31 from the Calhoun Community College campus.

An Alabama Farmers Cooperative distribution center moved into 158,000 square feet of the space in January, and Claborn Manufacturing has manufacturing and office space totaling 172,000 square feet there, according to Whisenant. Claborn makes hollow-metal security doors, frames, windows and wall panels for prisons and jails.

“Claborn Manufacturing has started partial production and will ramp up over the next month,” Whisenant said. The company has about 50 to 60 employees at the location, he said.

So far, just under $30 million has been invested in the park in real estate and construction costs, not including Claborn Manufacturing’s equipment, Whisenant said.

The third phase of about 25,000 square feet of warehouse and office space for Cornerstone Detention Products is now being designed, he said, and that phase is expected to be completed by October. It will be at the eastern end of the building, closest to U.S. 31.

Whisenant said Cornerstone — a specialty trade contractor that installs doors, hardware, security systems, intercoms and other equipment in jails and prisons — now has 35 employees at its temporary location in the Claborn Manufacturing space.

Cornerstone and Claborn Manufacturing, as well as Limestone Building Group, are owned by Mitch Claborn.

The industrial park has about 41 acres in all, on north and south sides of Sandy Road, which runs off U.S. 31. Roughly half of the property is still available for future growth, according to Whisenant, with the largest tract between the renovated building and Sandy Road that would accommodate a 180,000-square-foot building.

“We can build to suit or build spec buildings eventually,” he said.

On the south side of Sandy Road, Limestone Building Group restored another vacant building, a former UAW union hall, for its home office. That project earned a national Excellence in Construction Pyramid Award from Associated Builders and Contractors.

Built in 1984, the 7,000-square-foot building was empty for more than two years, and required renovations of major electrical components and mechanical systems, new windows and demolition of the flooring and ceilings. The winning EIC projects were judged on factors including complexity, attractiveness, unique challenges overcome, completion time, workmanship, innovation, safety and cost.

Another part of the former Delphi site has also been transformed. To the north, on Thomas Hammonds Road, Philadelphia-based Carpenter Technology last year opened its newest advanced additive manufacturing facility and Emerging Technology Center in the former Delphi Building 23.

Bethany Shockney, president of the Limestone County Economic Development Association, said the southern part of the county is a “hot commodity.”

“We’re still seeing a lot of activity, it’s stable,” she said. “We are open for business.”

She said “training providers in the area, particularly Calhoun Community College, are more nimble than they’ve ever been before and can provide training specific to any company that comes here.”

Another growing industrial park in Limestone County is SouthPoint Business Park near the intersection of Interstates 65 and 565.

Eight buildings in the company’s industrial park, totaling just over 1 million square feet, are either owned or leased by tenants from defense contractors to distribution companies.

As for the pandemic’s impact on interest in the park, Mann said: “We were quiet for about a week. Since then, there’s been a greater than normal level of interest.

“It’s not what we really expected.”