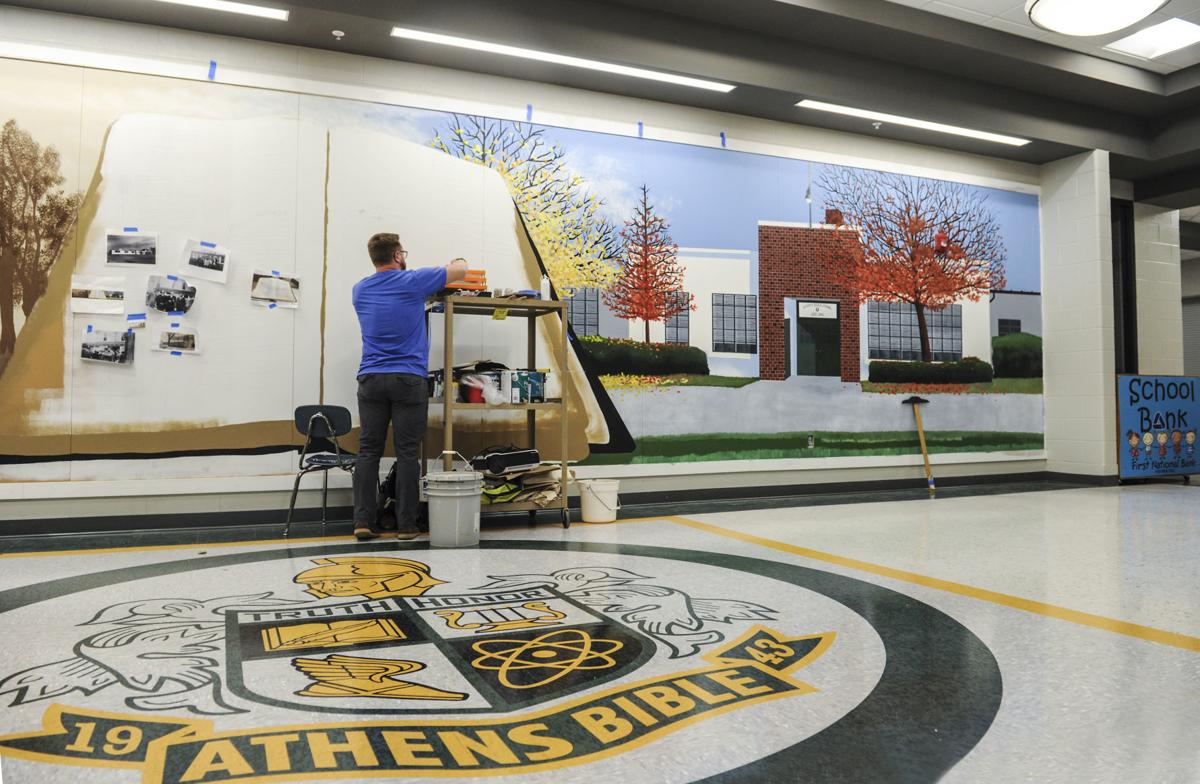 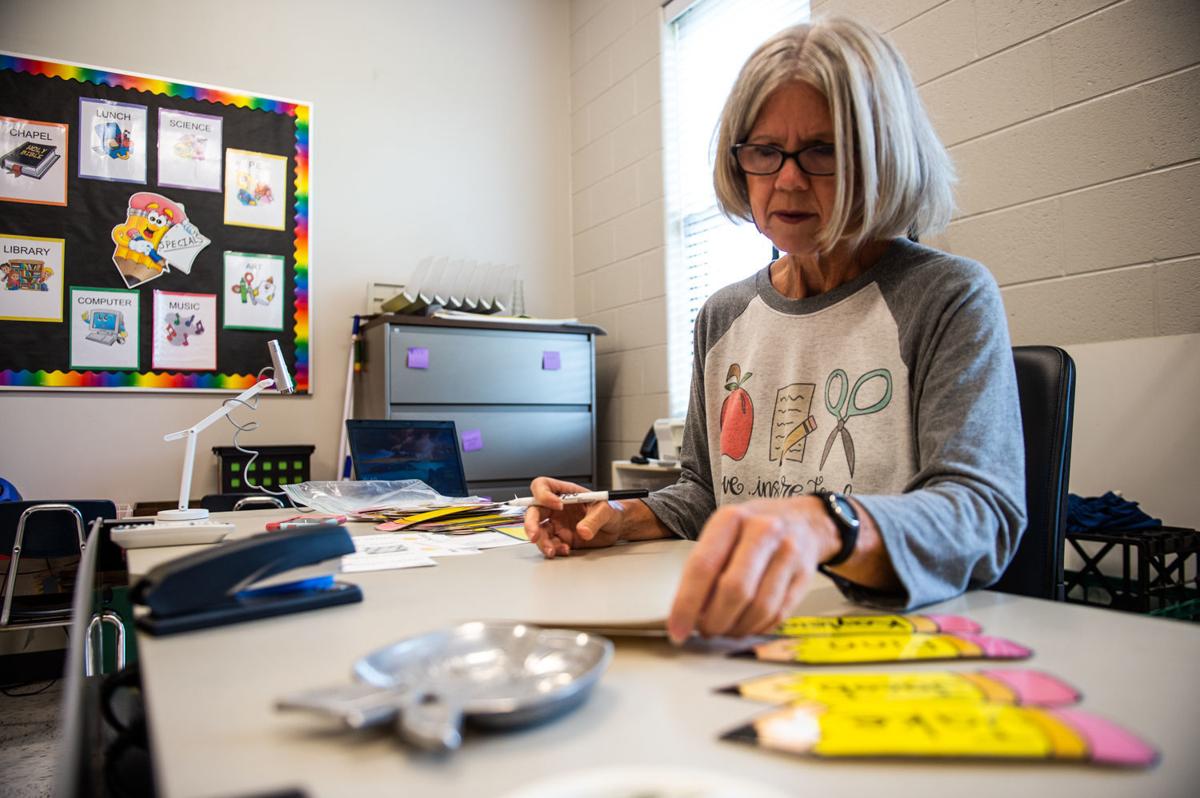 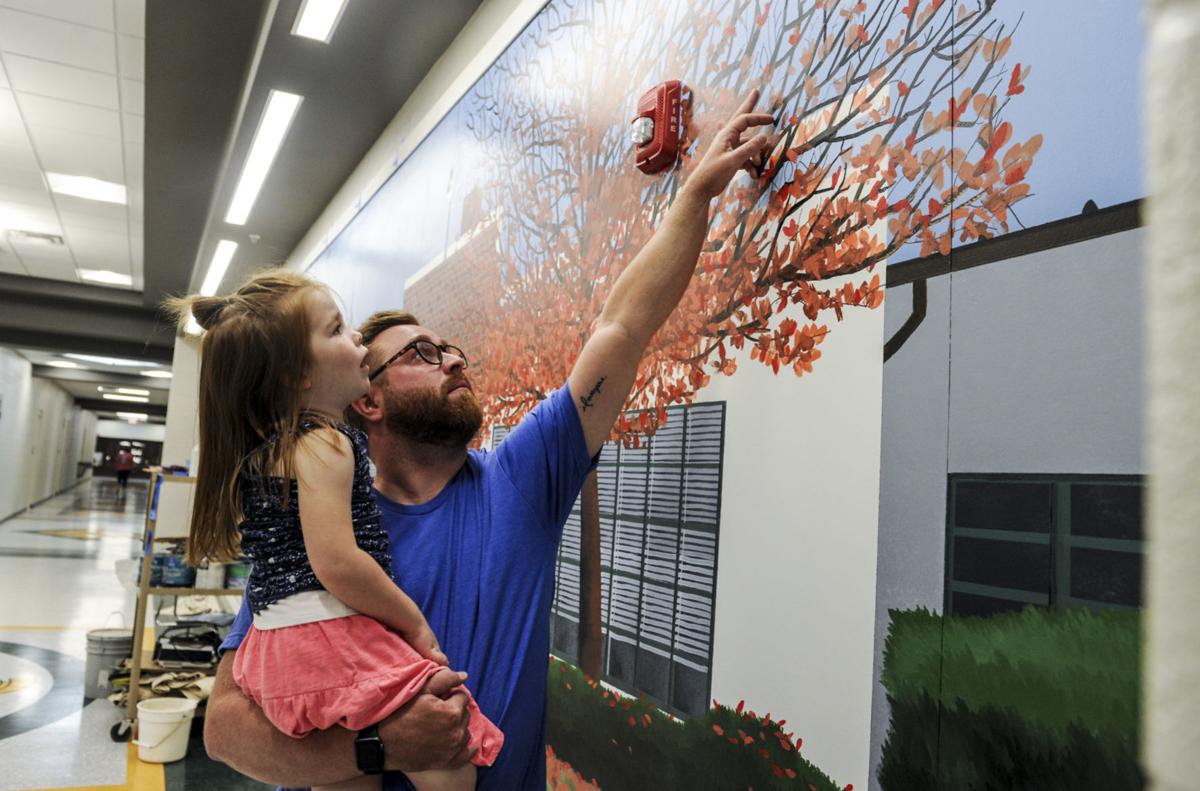 Former Athens Bible School student Micah Clem shows his daughter, Lucy Jo, where her name is hidden in the mural he is painting for the new school Friday. [JERONIMO NISA/DECATUR DAILY] 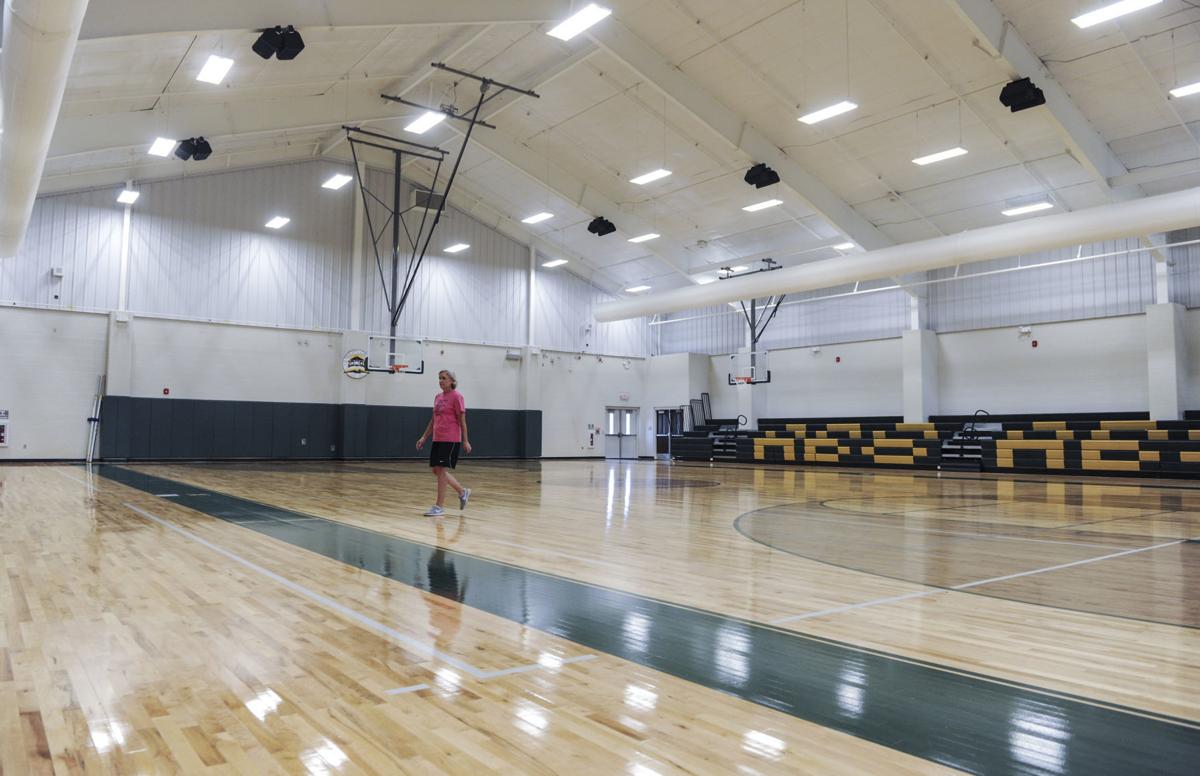 Former Athens Bible School student Micah Clem shows his daughter, Lucy Jo, where her name is hidden in the mural he is painting for the new school Friday. [JERONIMO NISA/DECATUR DAILY]

ATHENS — New programs, a new campus and a temporary location for one elementary school are in store for students in Athens and Limestone County.

Athens Bible School students, who start back Thursday, are moving into a new 64,000-square-foot campus on U.S. 31 North, across from Athens High School, moving about a mile away from their old campus on Hoffman Street.

The $13 million school, which includes a gymnasium, academic building and a chapel that seats 428 people, has a capacity of 500, according to Gayle Hagewood, Athens Bible’s assistant director of development.

The school’s enrollment was around 239 at the end of the last school year and it had reached about 250 as of last week, Hagewood said.

“We’ve grown from 13 acres (at the former campus on Hoffman Street) to 42 acres,” she said.

“There are two inaugural programs we’re putting in place,” Hagewood said. “We’re starting a new pre-K program for 3- and 4-year-olds” and adding a program for dyslexic students.

To celebrate the opening, students, alumni, parents, teachers and other community residents will take part in a “Migratory March” to the new school Tuesday morning before the ribbon-cutting ceremony at the new campus.

Limestone County Schools, which open on Monday, are launching or expanding several programs at the system's Career Technical Center in an effort to meet future workforce demands.

A second class is being added at the CTC’s Advanced Manufacturing program, said Superintendent Tom Sisk.

“We’re adding the Cyber Patriot program this fall in partnership with the DOD (Department of Defense),” to prepare students for careers in the defense, banking and other industries, Sisk said. “We also added an Advanced Agriculture Science program at the CTC.”

CTC students will be switching from a seven-period day to a block schedule, Sisk said.

The Limestone County school district finished the last school year with about 10,700 students, including virtual students, and Sisk said he won’t have a clear enrollment count for this school year until the 20-day count.

“We have some contingency plans if we see significant growth,” he said.

Total enrollment was 4,295, as of Friday, compared to 4,135 at the end of the previous school year, said Beth Patton, the assistant superintendent of administration and instruction.

The iAcademy at Athens Elementary, a pre-K through third grade computer science academy, is relocating to the north building at the former middle school campus on Clinton Street for at least two years, according to Superintendent Trey Holladay.

The current school, which could accommodate about 400 students, will be torn down around October, with construction starting next year on a new school that will house about 600 students at capacity, Holladay said recently.

The current elementary building on North Madison Street had an enrollment of 365 students in pre-K through third grade, according to Holladay.

Holladay said that with the age of the existing school building and the growth at those grade levels, there was a need for a new facility, projected to cost about $13 million.

Moving to the south building at the former middle school are students in grades six through eight from Athens Renaissance, a program that offers virtual classes and a blended option with online and one-on-one instruction.

"We did just receive a state grant for an additional pre-K program," Patton said. "It will be housed at Julian Newman Elementary School, and it is full, with a waiting list." The district has two other pre-K classrooms, both located at Athens Elementary, she said.

Enrollment at a statewide K-12 online public school, Alabama Connections Academy, is “well over 2,000 and we are still enrolling,” said Principal Jodie Dean.

Enrollment at the school is “spread evenly” across grade levels, Dean said. Although the heavier concentrations of students have been in more populated areas like the Birmingham, Huntsville, Montgomery and Mobile areas, enrollment has also grown in other parts of the state like the Tuscaloosa, Anniston, Auburn and Dothan areas, she said.