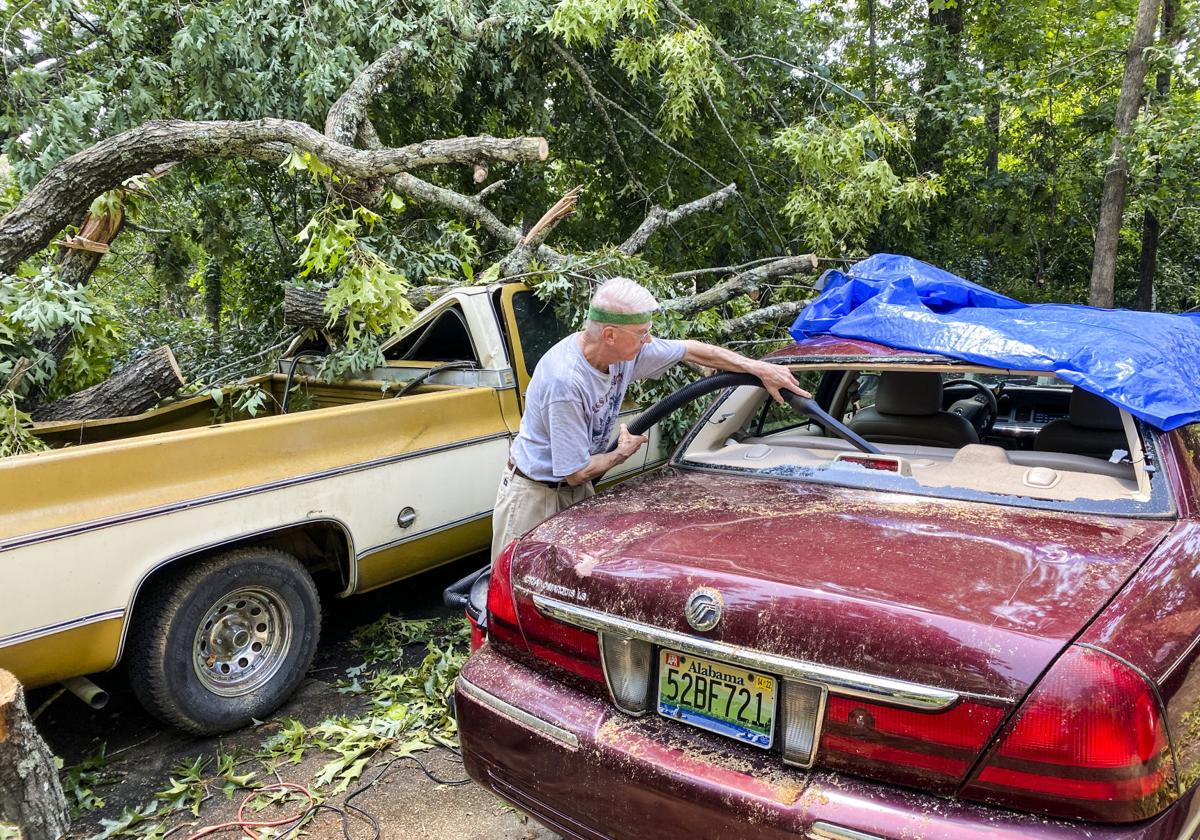 David Nye attempts to clean up damage on Monday morning at his Hunterwood Drive Southeast residence. A tree fell during Saturday’s storm and damaged three vehicles in his driveway. [MICHAEL WETZEL/DECATUR DAILY] 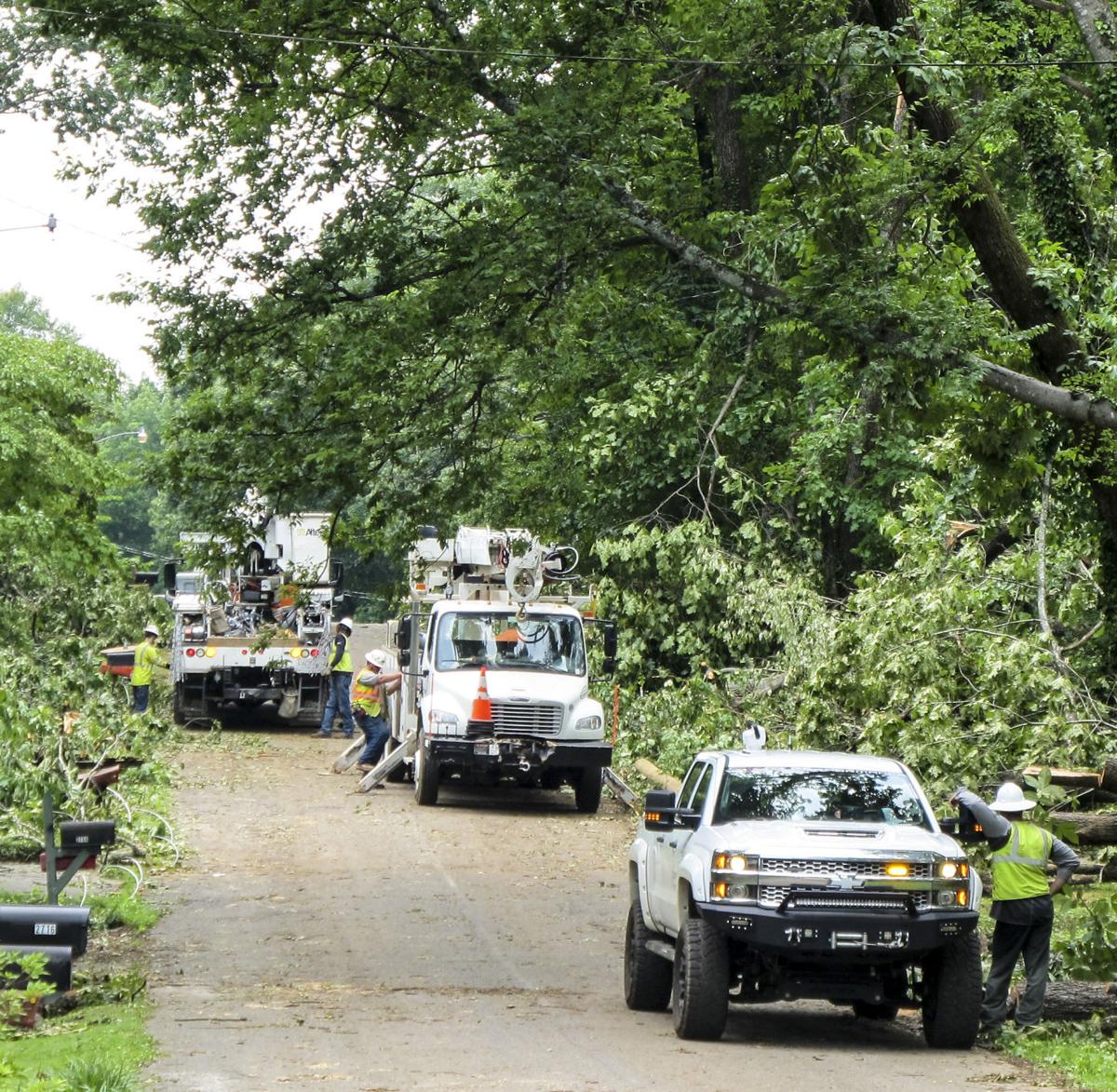 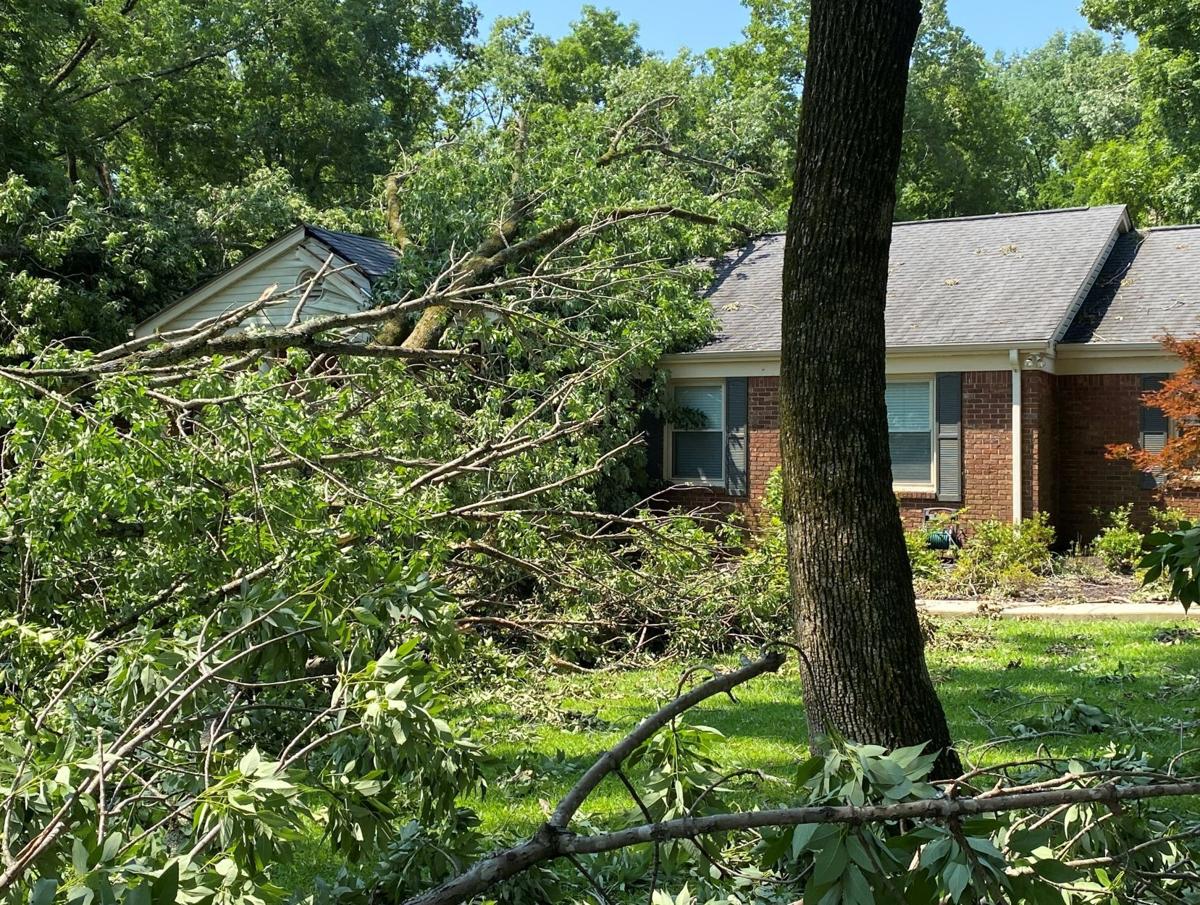 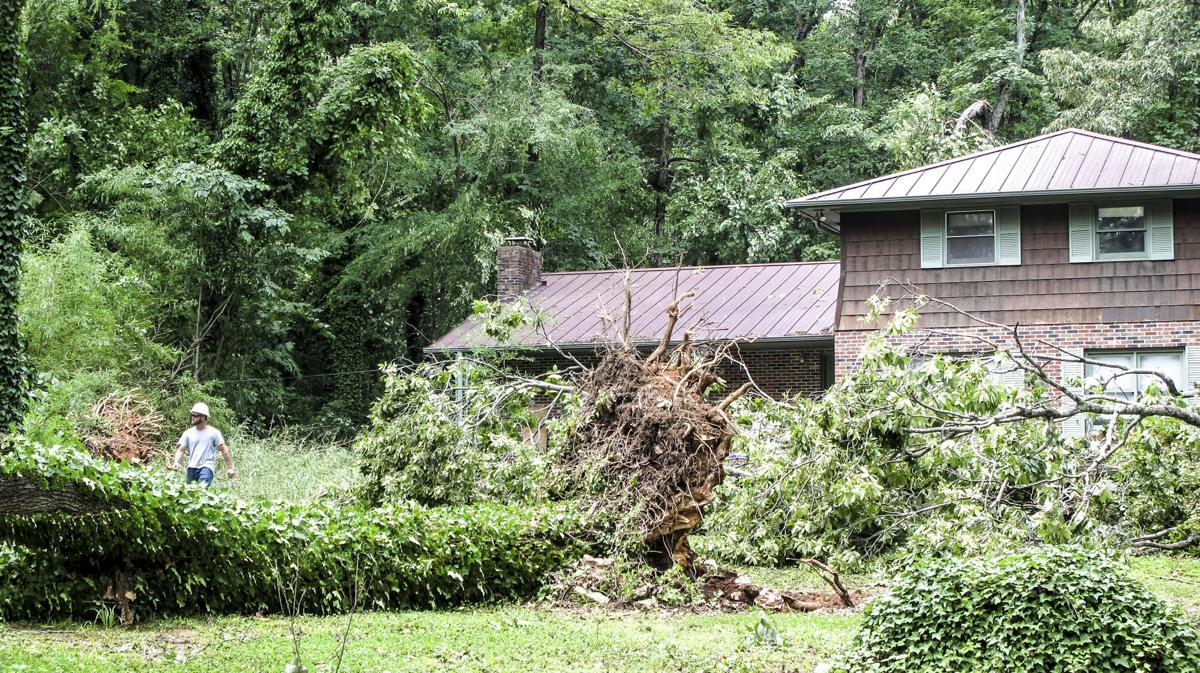 David Nye attempts to clean up damage on Monday morning at his Hunterwood Drive Southeast residence. A tree fell during Saturday’s storm and damaged three vehicles in his driveway. [MICHAEL WETZEL/DECATUR DAILY]

At least five houses in the Hickory Hills area of Southeast Decatur have been deemed unsafe, and seven other property owners will be issued maintenance notices following Saturday’s quick-hitting microburst that caused damage to several dozen homes.

City and county officials joined residents in calling it a miracle that no reported injuries occurred during the storm that brought wind gusts up to 60 mph.

Decatur spokesperson Emme Long said the city’s Community Development Department will issue five unsafe notices. “The five residences will not be occupied while the structures are under repair due to the severity of damage,” she said.

Geoffrey Heidelberger, a meteorologist with the National Weather Service in Huntsville, estimated the wind speed of the microburst Saturday was between 50 and 60 mph “based on the damage we saw.”

“Microbursts are really common during the summer months, but not this strong,” he said. “When the thunderstorm moved in, it was so humid and so moist, all of the precipitation came down at one time. Once it hit the ground, (the wind) went out in all directions.”

He said the weather service issued a severe thunderstorm warning at 1:57 p.m. Saturday and it expired at 2:30 p.m. “The heavy rains we had last week likely were a contributor to the trees blowing over. The ground was saturated," he said.

Morgan County Emergency Management Agency Director Brandy Davis said the storm damage assessment is “a little bit out of the norm” for officials.

“This storm wasn’t a tornado and not a flood with this amount of damage. It was quick and short-lived. It was too quick for any warning to take shelter,” she said.

Davis said the threshold for the city to receive FEMA assistance is $7.4 million of reported damage. It doesn’t appear likely in this case, officials said. Davis said her office is continuing to collect storm damage data and it could be a few days before a clearer picture is presented on the extent and cost of damage.

The Point Mallard Golf Course is expected to resume normal hours today after being closed since the storm passed Saturday, Long said.

DU spokesperson Joe Holmes said a 46,000-volt power line was down on a portion of the course. “We’ve completed our repairs,” he said Monday afternoon.

Talking among a constant buzz of chainsaws in her Sylvia Street neighborhood, Sue Milner said she and her husband Jim saw a large pecan tree fall into two tall pines in their front yard during the storm.

“It was surreal watching the tree fall,” said the retired schoolteacher. “The tree was not a sapling when we moved here 47 years ago. It was already large. ... The tree-removing people came by and said it would be $10,000 to remove the two big pecan trees and two pines.”

She said their house had no internet or cable television restored as of Monday afternoon. “It’s been nothing but an inconvenience. We’re thankful we did not have more damage and most of all that nobody was injured.”

Retired engineer David Nye said he felt like his house on Hunterwood Drive was the “epicenter” of the storm. “It was noisy. The wind was coming out of the east and it turned the rain into a white opaque mist. It was a miracle we didn’t have more damage on the house.”

But the family’s vehicles weren’t as fortunate. A tree crushed the top of a 1976 Chevrolet pickup and caused significant damage to a 2004 Grand Marquis LS. The family’s Ford Explorer had a few dents. He spent most of Monday cleaning debris and broken glass from the vehicles.

Travis Payne, who lives on Wayne Circle Southeast, said he was out of town when the storm ravaged the neighborhood. Neighbors sent him texts on the damage including of a tree on the front of his house.

“It was worse than I thought,” he said Monday morning waiting for his insurance adjuster. “The front porch was damaged the worst and we’re really fortunate we didn’t have more tree damage on the house. Trees are not human life. I’m glad nobody was injured. Our neighbors have been very helpful and the DU crews have worked tirelessly all night to get the power back on. They have a stressful and hot job.”

Portions of the Wheeler National Wildlife Refuge will remain closed for up to two weeks while storm damage is repaired, said Manager Ricky Ingram.

A tree on the northeast side of the refuge headquarters fell onto the roof, causing holes in the ceiling and water damage to a meeting room and office, Ingram said.

“On the Flint Creek side (of the refuge), the fishing pier and trail had significant damage and trees down,” he said. “Bigger trees were down around the visitors’ center and refuge roads behind Hickory Hills. Obviously, our priorities will be to get the tree off the roof and get the refuge roads cleared and trails open.”

He said the trails should be open in two to three weeks.

A storm toppled trees and knocked out power across Southeast Decatur on Saturday afternoon, with the heaviest damage in the Hickory Hills area…