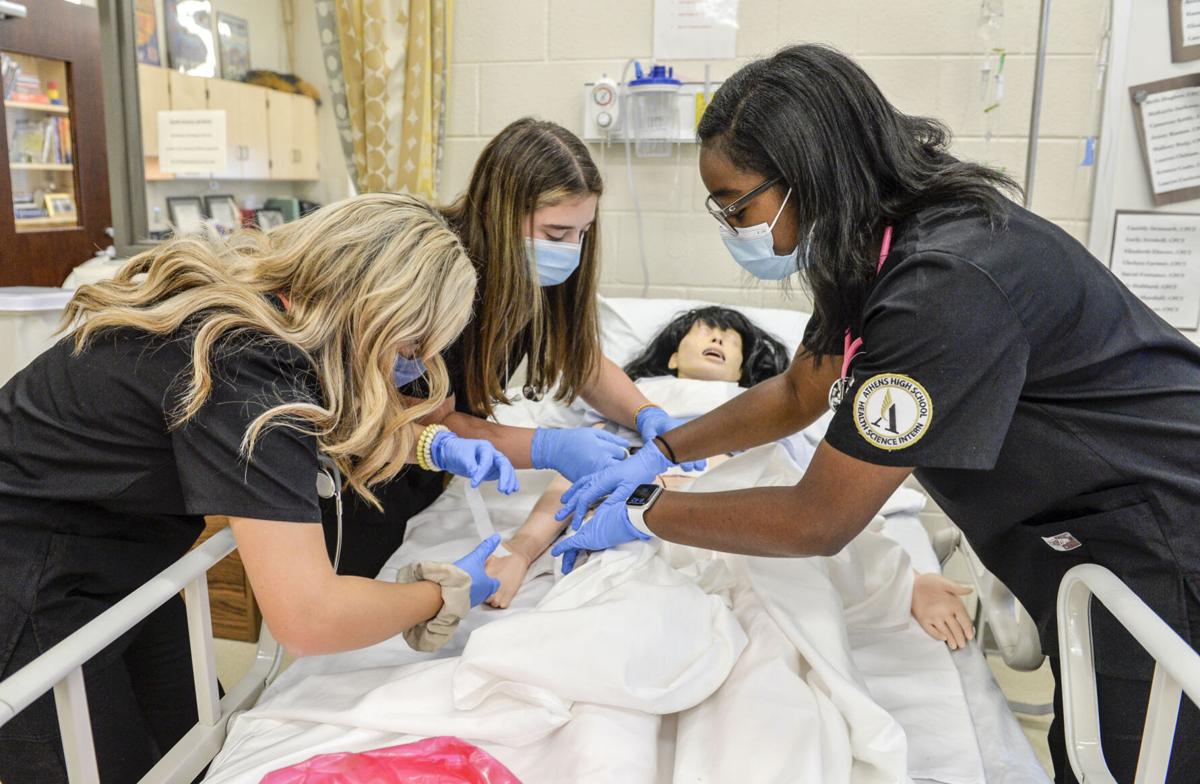 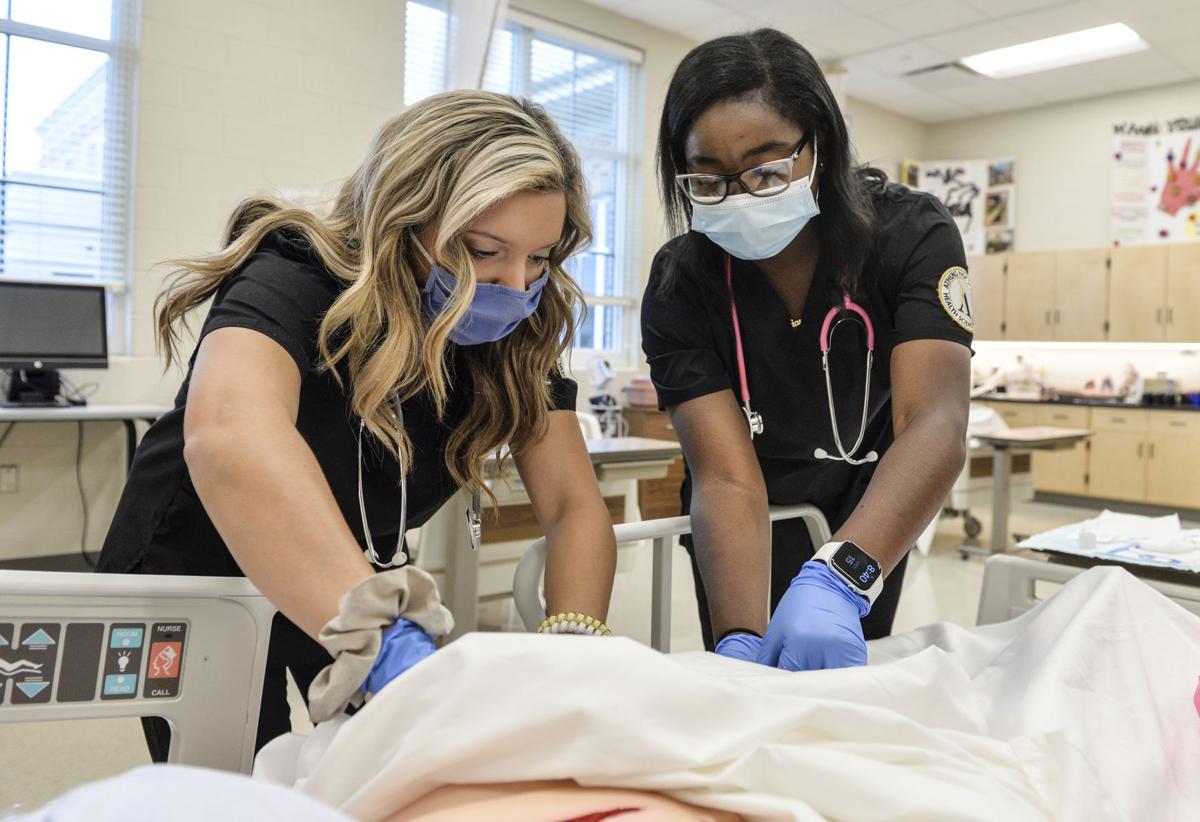 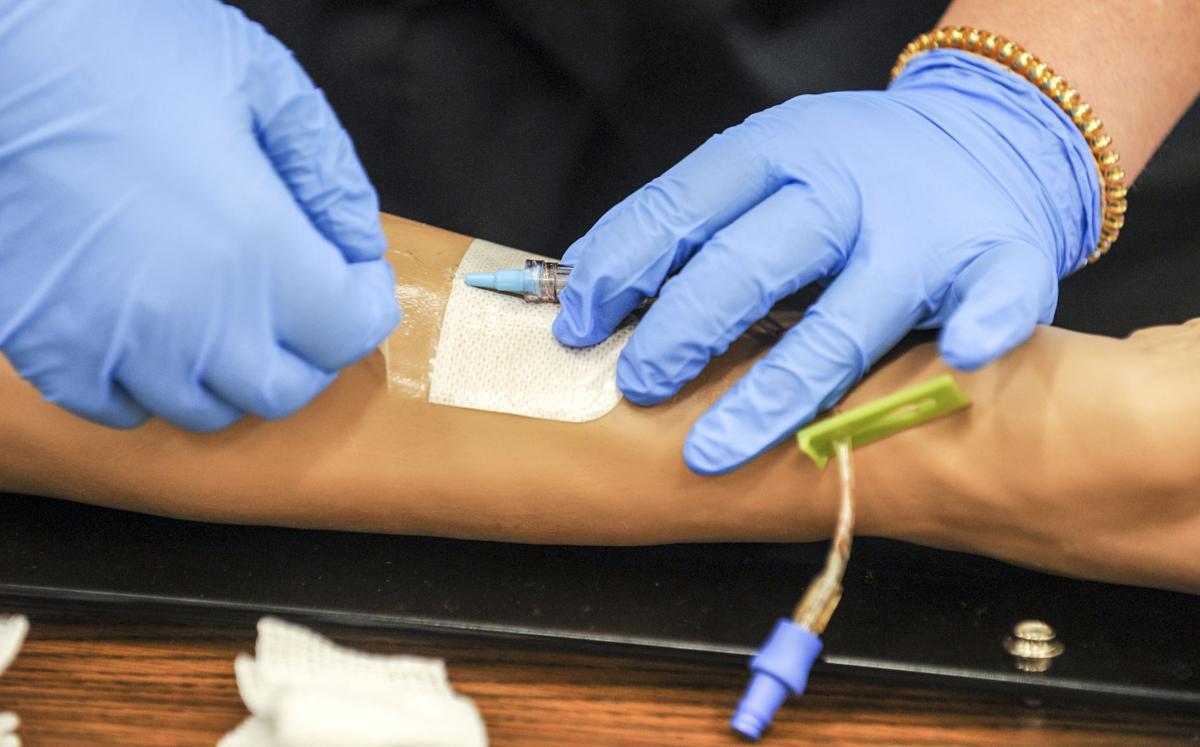 Paris O'Dell removes an IV from a mannequin during class at Athens High. [JERONIMO NISA/DECATUR DAILY] 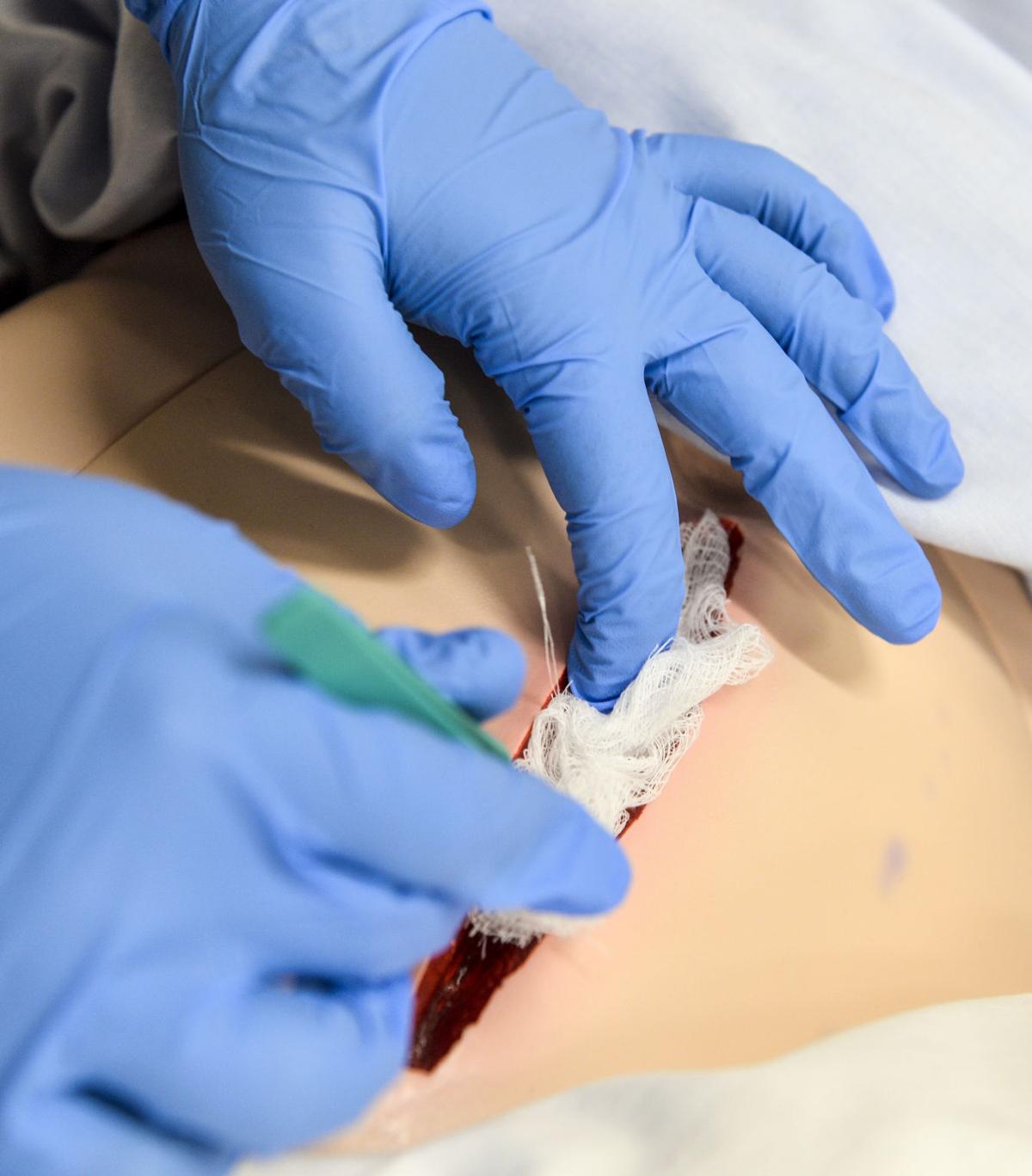 A student in Athens High School's Heath Science program uses a mannequin as she learns how to treat wounds. [JERONIMO NISA/DECATUR DAILY] 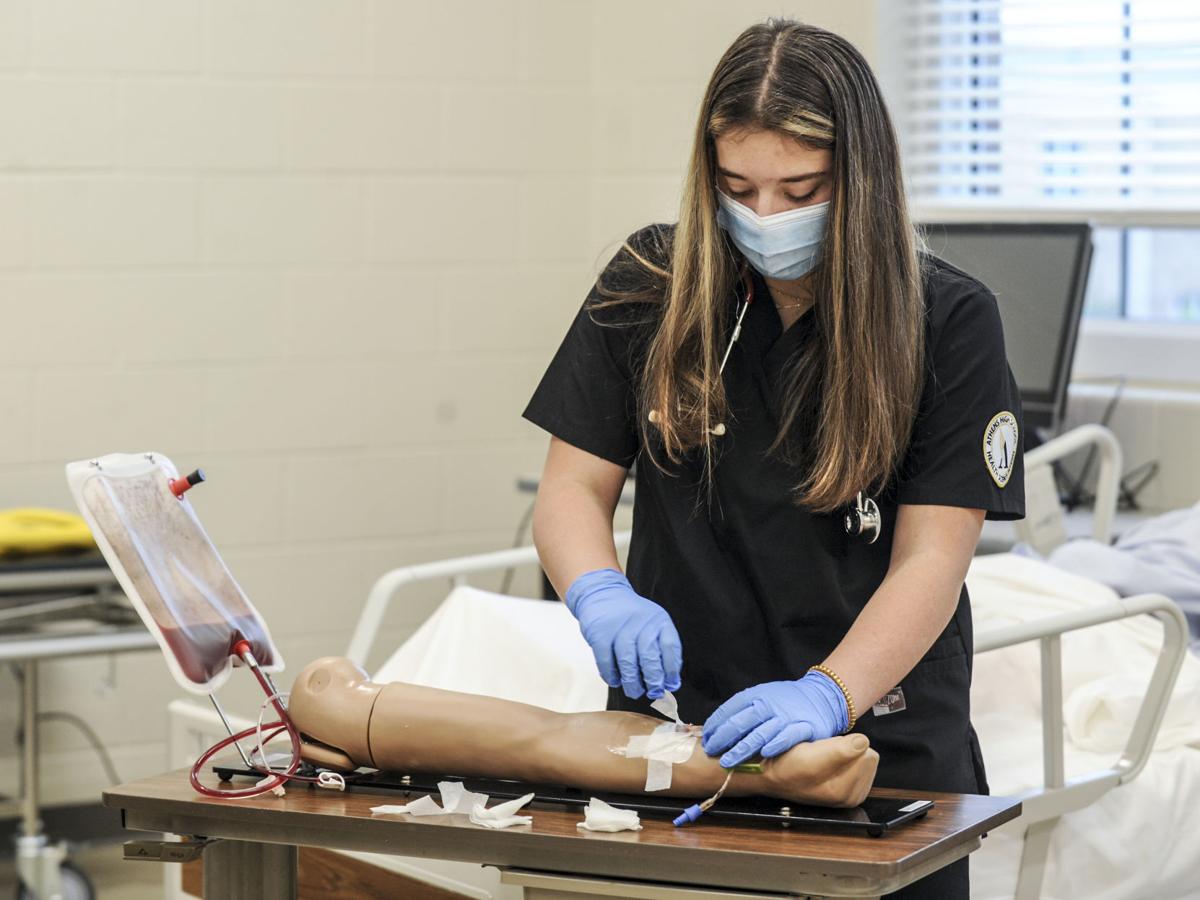 Paris O'Dell removes an IV from a mannequin during class at Athens High. [JERONIMO NISA/DECATUR DAILY]

A student in Athens High School's Heath Science program uses a mannequin as she learns how to treat wounds. [JERONIMO NISA/DECATUR DAILY]

Area high schools and colleges are working to address a severe local and statewide shortage of nurses, with some expanding existing programs and one school starting a new nursing program.

Athens City and Decatur City schools both have established programs introducing students to the nursing field, Calhoun Community College and the University of Alabama in Huntsville are preparing students for nursing careers, and Athens State recently started a nursing program that it expects to expand.

Athens Limestone Hospital has 45 nursing positions open. The nursing staff there is also working one extra shift per week, said Felicia Lambert, the director of marketing, physician recruiting and volunteers.

“We think it is filling a real need in our region,” said Stephen Spencer, dean of the College of Arts and Sciences at Athens State.

Spencer said the university recognized the extent of the crisis facing hospitals and submitted a proposal for the RN BSN program to the Alabama Commission for Higher Education.

“We proposed the program in fall of 2020 to respond to state needs for more nursing professionals and it officially began this semester,” Spencer said.

There are currently 79,238 registered nurses working in the state of Alabama, according to data from the Alabama Board of Nursing. Nationally, the Bureau of Labor Statistics projects that health care support occupations will have the fastest job growth of all occupations through 2030, and that seven of the 30 fastest growing occupations are in health care.

Mark Reynolds, assistant professor of nursing and director of the new RN BSN program at Athens State, said the program will allow registered nurses to advance into directorial roles.

“They’ll be able to move into leadership positions, management positions, and they can also continue at the bedside as a registered nurse with more skills and abilities to care for their patient population,” Reynolds said.

After they graduate from the program, Reynolds said, they will be able to attend graduate school and pursue careers such as nurse practitioner and case management.

Reynolds has only four registered nurses enrolled in the program this semester and both he and Spencer agreed the low number is because the program was instituted late for the fall semester.

“We’re definitely looking to grow that enrollment by the spring,” said Reynolds. “The publicity department has done outreach to nurses working in the area and I will continue to carry that outreach to the local health care organizations and hospitals in the area.”

The program is online, but students have to undergo a type of clinical training called direct practice experiences, which are hands-on activities where they shadow a BSN RN nurse.

“We’ll start doing direct practice in the spring when we have more enrollment,” Reynolds said.

Reynolds said colleges across the nation need to stop limiting the number of eligible applicants to their nursing programs because that is ultimately contributing to the nursing shortage.

“Say a college nursing program is going to take 112 students this fall,” said Reynolds. “Well, what if it's got 200 applicants who meet standards and requirements? You’re turning away 80 or 90 potential RNs.”

Reynolds said he does not want to turn away any potential students at Athens State who meet admission requirements.

In addition to the demands of the COVID-19 pandemic, the rate of pay for nurses in Alabama is also contributing to the shortage, said John Ziegler, the executive director of the Alabama State Nurses Association.

"According to the Department of Labor June report, Alabama pays 8% lower than average for registered nurses as opposed to surrounding states," he said.

Ziegler said federal money should be spent to compensate staff nurses rather than contract nurses.

"The government should consider staff nurses, who are the key ingredient in the fight against COVID, but they don't," Ziegler said.

At the College of Nursing at the University of Alabama in Huntsville, Interim Dean Karen Firth said she wants her students to have plenty of clinical hours.

“To reduce the nursing shortage, we want to provide well-prepared students who can pass the national licensing exam,” Firth said.

“We’re at very early stages of instituting different programs and we are trying to increase our enrollment,” said Amy Lanz, the associate dean for undergraduate programs at the UAH College of Nursing.

Firth said enrollment has been slightly down since the spring of 2020.

Career Academies of Decatur has operated a Health Science program for Decatur City Schools since the academies begin in 2018, and before that similar programs were in place at Decatur and Austin high schools.

"We have eight teachers over the Health Science program and an average of 800 students from grades 8 through 12 that enroll every year," said Shelton Cobb, the career and technical education supervisor of Decatur City Schools.

Cobb said enrollment was lower this year with 767 students. The decrease was a result of the pandemic, he said.

In the eighth grade, students take introductory health courses and when they reach their senior year they do clinical training in local hospitals.

"Most of the kids in this program want to go into nursing," Cobb said.

At Athens High School, former nurses Missy Greenhaw, Dana Reynolds and Gia Russell have been providing hands-on training for students who want to pursue careers in the medical field. For eight years, students in the Health Science program have been doing clinical training in hospitals, but they were not able to after the spring of 2020 because of COVID-19.

“We added an EKG technician (instruction component) because we weren’t able to do clinicals,” said Greenhaw, who worked as a nurse for 20 years before she began teaching at Athens High.

Greenhaw said that while Alabama has had a nursing shortage for years, the coronavirus has shown the magnitude of the shortage and that this is a great opportunity to reach out to students who want to work in the medical field.

“It’s kind of the perfect storm,” Greenhaw said. “It’s a good opportunity to teach students what’s actually involved and what you have to deal with.”

During the first part of the semester, Health Science students work to obtain their patient care technician (PCT) certificates. The latter half of the semester focuses on clinical training.

Several students in the program plan on pursuing nursing careers.

Lilly McGuire plans on attending the University of North Alabama and wants to work as a pediatric nurse.

MaKayla Jones said she is leaning toward attending Auburn University or the University of South Alabama and wants to work as a labor and delivery nurse.

Paris O’Dell plans on attending the University of Mississippi and wants to work as an emergency room and trauma nurse.

“I’ve always looked up to nurses,” said McGuire, “When I heard about this program here at my school, I thought, ‘Oh my gosh, I have to be a part of that.'”

Recently it was reported that Alabama ranks 50th in pay for registered nurses. The surrounding states may pay about 8% more, but they are ranked 47th,48th, and 49th in pay for RNs. We are making extra money by working 48-60 hours a week and honestly we are all tired. I for one wish the moneys allocated for COVID relief went directly to the nurses in Alabama and not filtered through many hands to where we get an occasional pizza meal but no extra pay unless we sacrifice our time with family and physic/mental health by working a LOT of hours. Please contact your local and state governments and hospitals and ask for nurses to be paid more in real money in their checks every week. Thank you