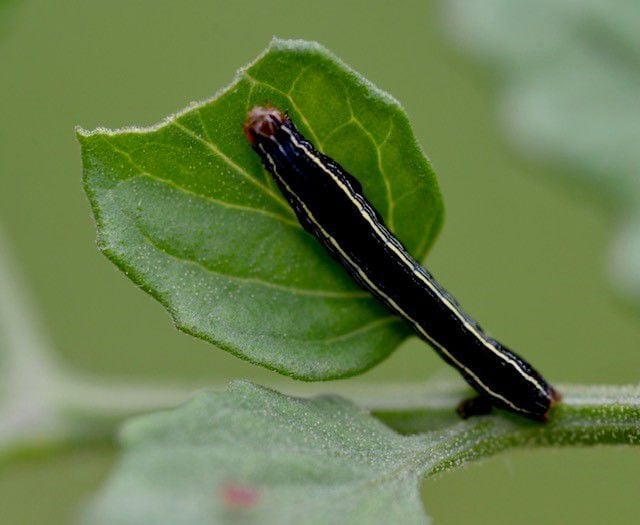 A yellow-striped army worm grazes on a leaf in Southwest Decatur this week. [CONTRIBUTED BY JOHN GODBEY] 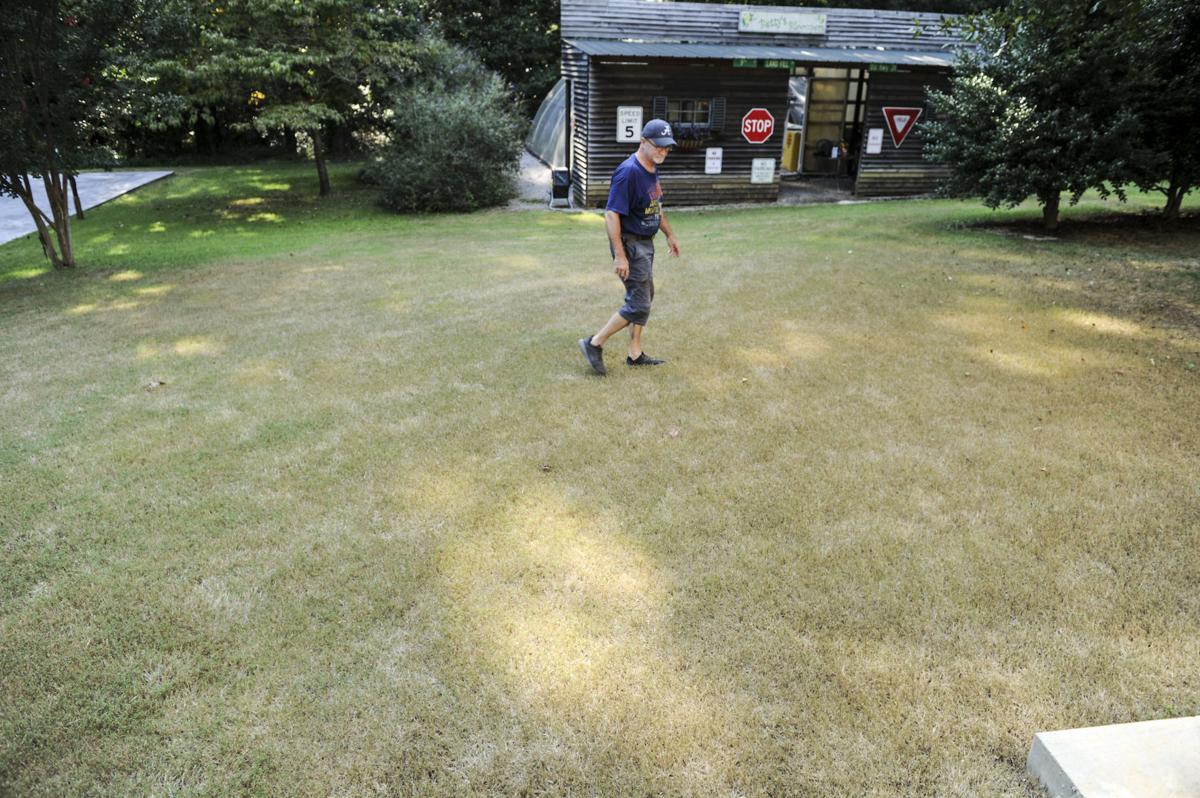 Jimmy Cross walks on the area of his Trinity home's yard damaged by army worms. In the background a spot untouched by the worms remains green. [JERONIMO NISA/DECATUR DAILY] 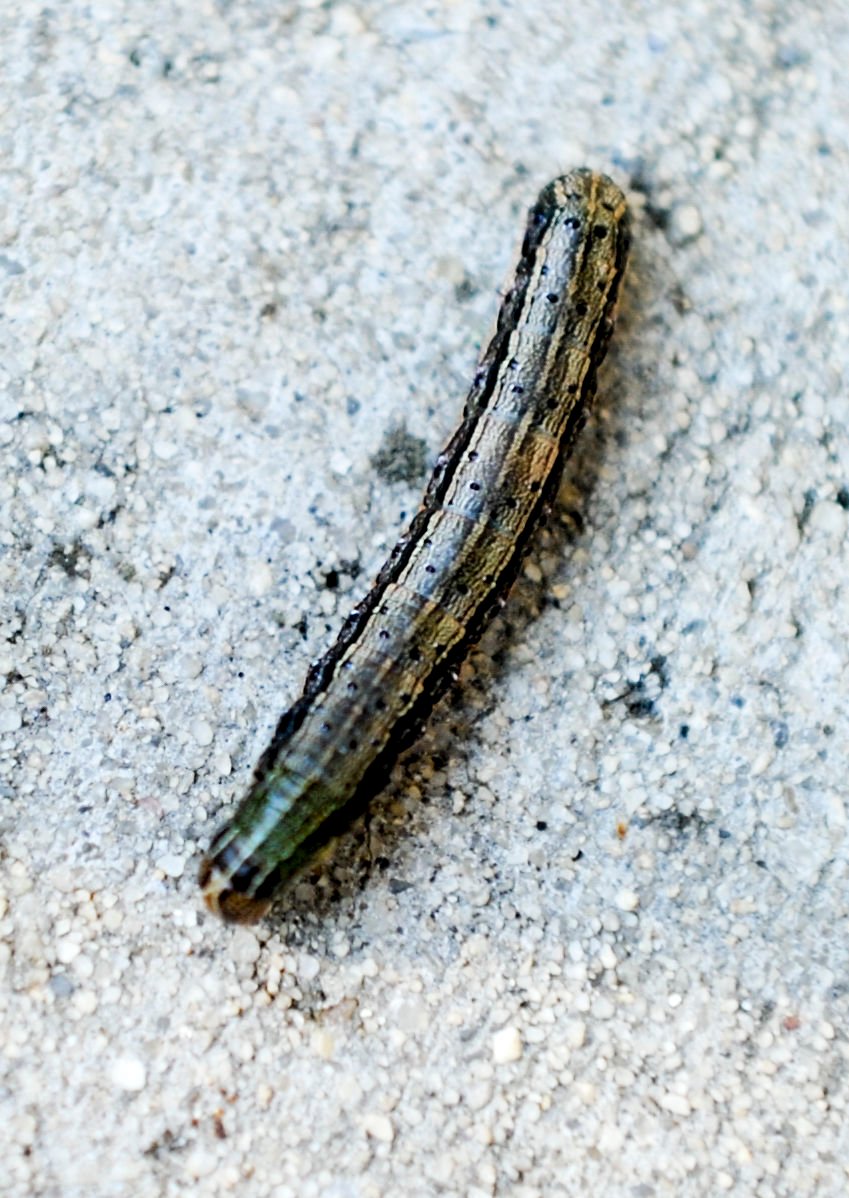 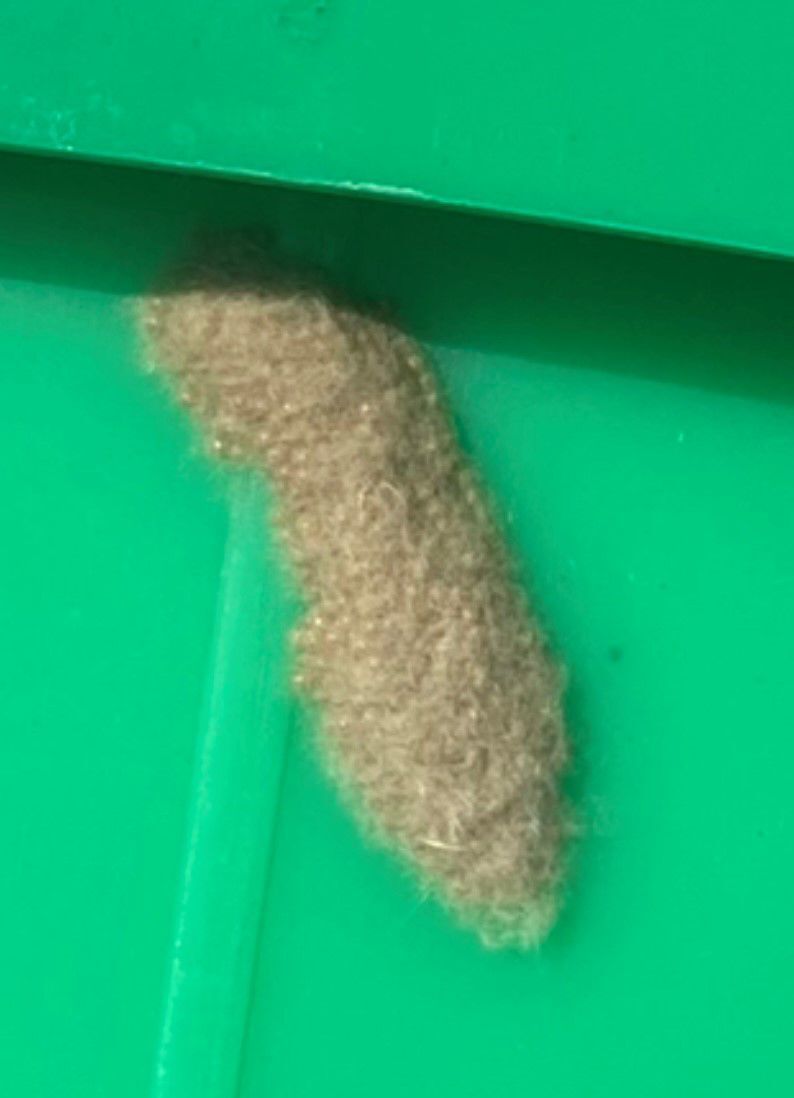 One way to avoid army worm infestation is to locate and crush the egg sacks, such as the one shown here. [CONTRIBUTED PHOTO BY ALABAMA COOPERATIVE EXTENSION SERVICE] 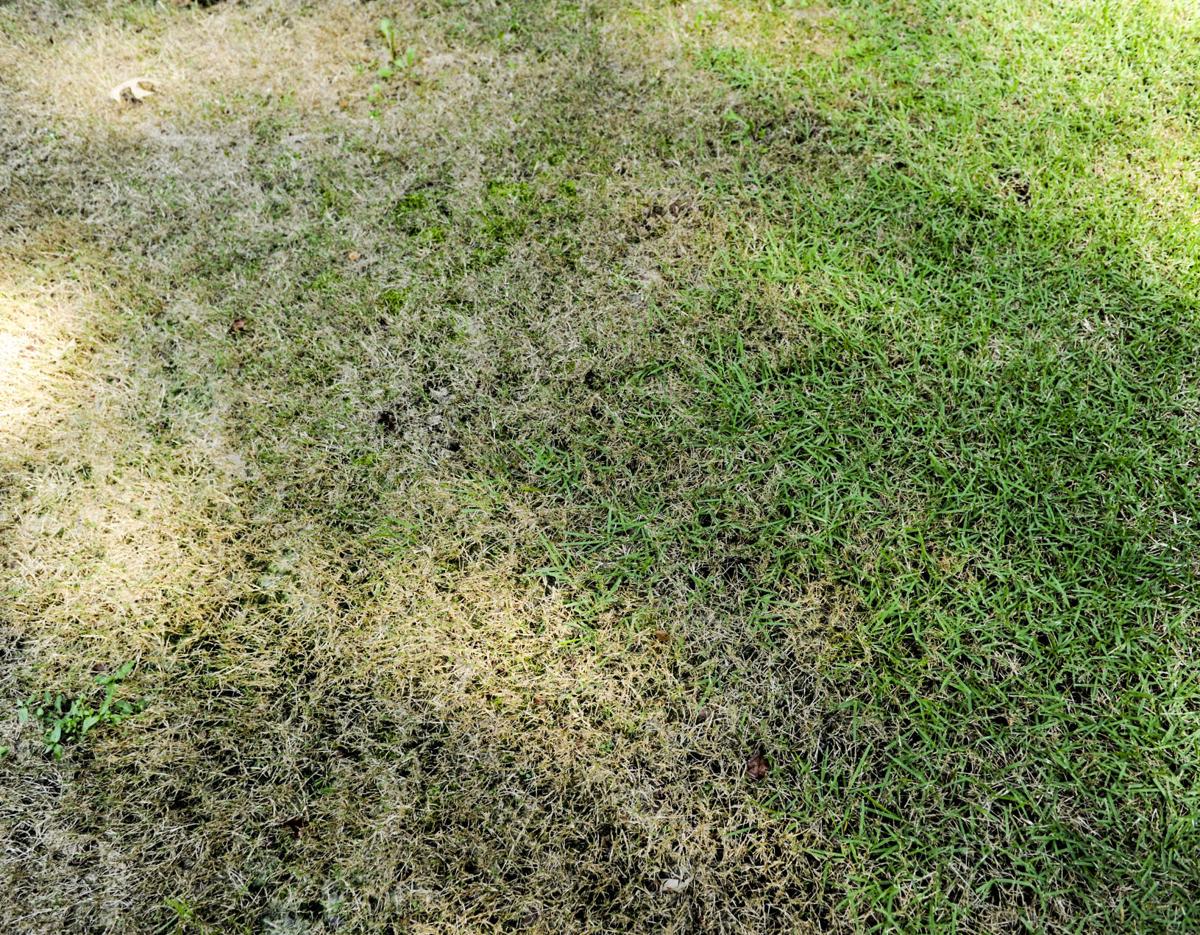 On the left, an area of damaged Bermuda grass (yellow/brown) and on the right, a section of healthy zoysia grass untouched by the army worms. [JERONIMO NISA/DECATUR DAILY]

A yellow-striped army worm grazes on a leaf in Southwest Decatur this week. [CONTRIBUTED BY JOHN GODBEY]

Jimmy Cross walks on the area of his Trinity home's yard damaged by army worms. In the background a spot untouched by the worms remains green. [JERONIMO NISA/DECATUR DAILY]

One way to avoid army worm infestation is to locate and crush the egg sacks, such as the one shown here. [CONTRIBUTED PHOTO BY ALABAMA COOPERATIVE EXTENSION SERVICE]

On the left, an area of damaged Bermuda grass (yellow/brown) and on the right, a section of healthy zoysia grass untouched by the army worms. [JERONIMO NISA/DECATUR DAILY]

Army worms are on the march, leaving damaged lawns and plants in their wake, but experts say there are ways to get rid of them.

“It’s almost the perfect environment, because we have all this rain, all this humidity, and you have all these green lawns with all these rich nutrients. These worms are just going crazy,” said Marcus Garner, Home Grounds County Agent for Limestone, Madison and Marshall counties.

Plentiful food, water and a place to hide all increase the chances of an army worm onslaught, he said.

In the Decatur area, evidence of the destruction comes as lawns turn from green to brown. Homeowners aren't the only ones surprised at the number of bugs.

“Some of the folks that have been through many seasons here in the South say this is the biggest fall army worm outbreak they’ve seen in decades,” said Katelyn Kesheimer, a professor and specialist at the Alabama Cooperative Extension System at Auburn University.

The origins of the army worm infestation that is bringing frustration to lawn owners and gardeners in Morgan, Limestone and Lawrence counties came before brown patches began appearing in area yards.

“It’s a migratory insect where the adult moths fly up north feeding and laying eggs as they go,” Kesheimer said. “This year, we saw high numbers start early. This means they get a head start on laying eggs and hatching and have more time overall to wreak havoc.”

The moths lay hundreds of eggs within a week, and it takes two to four days for the eggs to hatch, Garner said. It then takes two to three weeks for them to turn into full-grown larvae. They then burrow into the ground for 10-14 days before emerging as moths.

Indeed, one of the best ways to avoid army worm damage is to locate the eggs before they hatch.

“One thing homeowners can do is look for egg masses laid by the adult moth and remove those,” Kesheimer said.

Common locations for the egg sacks are near pools and on electrical boxes, house siding and any flat surface near lawns.

“They are covered with scales for protection so end up looking like a fuzzy white mass," she said. "These can easily be removed and squished to prevent hatching.”

Once they hatch, however, their appetite is voracious.

They migrate from area to area based on environment and soil structure, Garner said. Local army worms are especially aggressive in eating Bermuda grass and fescue, but Kesheimer said they're not picky.

“Fall army worms especially are very generalist; they will feed on a wide variety of plants, but they especially love well-irrigated, well-fertilized Bermuda grass. But in years like this, any grass crop is fair game,” Kesheimer said.

They also are a menace to agriculture.

“They are affecting many different systems including row crops like soybeans, hayfields, home lawns, golf courses, and specialty crops,” she said.

There is no way to put a dollar amount on how much damage has been caused statewide by army worms, said Kesheimer, “but they are certainly the most damaging pest we see in pastures and hayfields.”

Lisa Schrimsher, who lives on State Avenue Southwest in Decatur, said she has never before had a problem with army worms. This year, however, her Bermuda grass lawn has been severely damaged. She tried doing a dishwashing soap flush of her lawn for three days, but to no avail. She said she would try insecticides next. Schrimsher contacted a lawn service but was put on a waiting list.

Trinity resident Jimmy Cross is also having a problem with his Bermuda grass lawn.

“The grass has just turned brown, like it’s dead. When you see it like that, it’s too late,” said Cross.

According to Kesheimer, there are no preventative lawn applications that can be used on lawns not yet infested.

“Most of the products labeled for home lawns need to be ingested by the worms or it is contact-kill. So, homeowners need to detect worms before applying anything,” she said.

Controlling army worms gets increasingly difficult as they get larger, and the largest — typically 1-1½ inches long — also do the most damage.

"There are products that work best on smaller worms such as insect growth regulators or biologicals, but they won’t have any effect on larger worms. In general, larger worms are harder to kill and particular products are better than others," Kesheimer said.

To rid a law of army worms, Garner suggests several options. Aerating the lawn can help, he said, as will plant-based organic pesticides. Pesticides that kill on contact include bifenthrin and permethrin. He said any type of granular treatment must be activated with water.

The Alabama Cooperative Extension Service recommends the following pesticides, and provides examples of products that contain them:

• Bacillus thuringiensis, such as the product Thuricide.

• Imidacloprid and cyfluthrin, such as Bioadvanced Complete Insect Killer.

• Permethrin, such as Hi-Yield 38 Plus Turf, Termite, and Ornamental.

• Trichlorfon, such as Bayer Advanced 24 Hour Grub Killer Plus.

Cross said he is having success using Sevin spray and bifenthrin.

In addition to careful examination of lawns and being alert to the moths that may be laying eggs, the presence of an unusual number of wasps or birds — which feed on the army worms — may be an indicator that army worm infestation is imminent.

That's how Cross was alerted when he last dealt with army worms.

“Five years ago, I remember a bunch of robins coming in my yard and I was wondering what they were doing because it was a larger amount than normal. It wasn’t two or three hopping around in the yard, it was 15. They were eating those army worms,” Cross said.

Garner said the worms won't kill the roots. He compares the damage to burning a lawn and said it will come back green next spring.

Morgan, Lawrence and Limestone counties have reported lots of damage, but it is a widespread problem.

“This is not only a statewide issue, but a regionwide issue. We are hearing reports of fall army worm outbreaks all the way out west to Texas and as far north as Tennessee and Kentucky. And everywhere in between,” Kesheimer said.

Lowe's and Home Depot are sold out. It's almost the fall anyway.