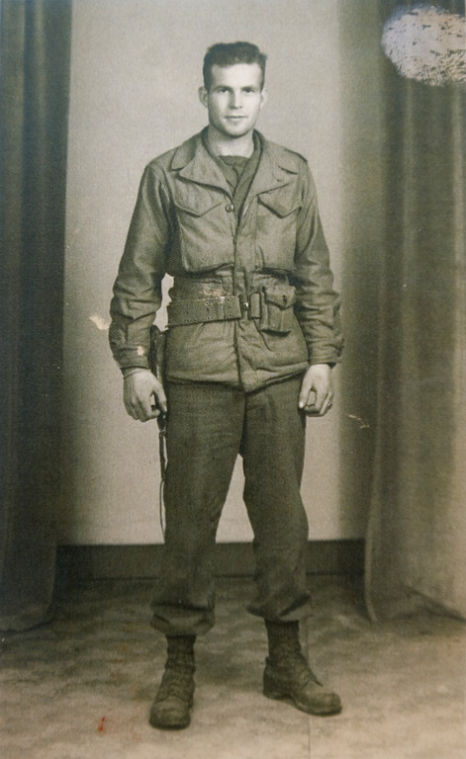 A photograph of George Mills taken during World War II. 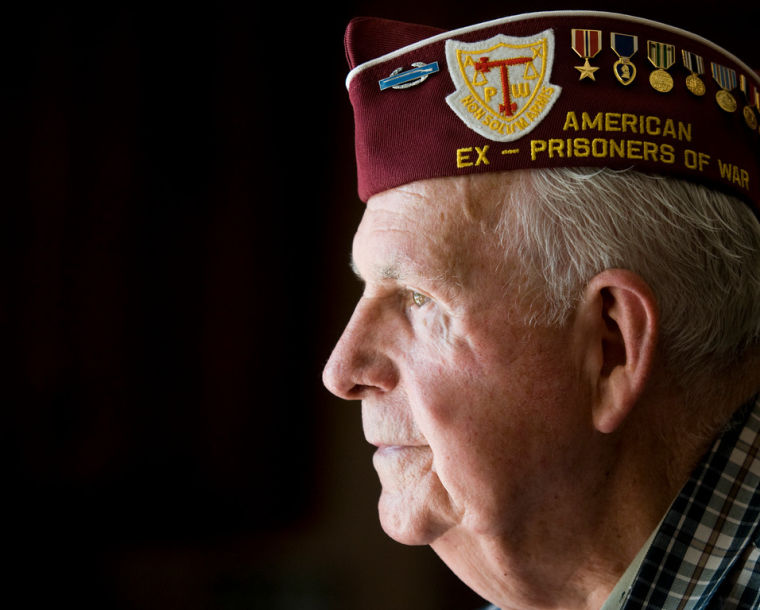 George F. Mills was part of the company taken prisoner at the Battle of the Bulge during World War II.

A photograph of George Mills taken during World War II.

George F. Mills was part of the company taken prisoner at the Battle of the Bulge during World War II.

During the 70-year anniversary of the start of World War II, a Decatur man who volunteered to serve recalls vivid details of his experiences.

His first time in combat. The loss of his best friend. Almost four months as a German prisoner of war, scrounging for food to stay alive on an extended forced march.

“It falls back to all those men I served with who gave their lives in that war,” said Mills, whose keen mind and energy belie his age. “They were ready to go and get it over with. They’re the heroes, so many. They never had stories written about them. But I remember them.”

Many in the area remember Mills, too, such as Phillip Sherman of Decatur. And they label him a hero.

“There’s not a finer man in America than George Mills,” Sherman said. “He is a complete total American hero if there ever was one. You can’t get enough good stories to tell about him. My daddy knew him when they were kids.”

The Japanese bombed Pearl Harbor on Dec. 7, 1941, bringing the United States into the war. Mills, a 1939 graduate of Riverside High School, the forerunner of Decatur High, knew draft officials were about to punch his number, so he joined the Regular Army in May 1942.

“At 21, you’re not afraid of anything,” he said. “You thought you were an iron man. That was until they start shooting at you. When you first hit combat, it kind of stuns you, and you never guessed you would get used to it. But you go on, and sooner or later, you think you’re going to be in the cross hairs. You kind of get hardened to it. When you get back home, it takes a pretty good while to get that shell off of you.”

Mills said that for the first 30 years after the war, no one ever asked him if he was a veteran.

Mills looked at photos of men in his company and glanced in an address book for a double check on some of their hometowns.

But everything about Staff Sgt. Howard Morton remains fresh on his lips.

“He was my best friend, and I was only about 50 feet from him at a crossroads in a little village in France, about 80 miles west of Paris, when he went down,” Mills said. “It was early August 1944, as we moved to liberate Paris. The Germans had just launched an attack, and we were jockeying to find the location of a 20 mm antitank gun. Howard was struck in the chest, and it blew his whole chest out.”

Mills met Morton of Sheboygan Falls, Wisc., during basic training in Livingston, La., and advanced with him through other training sites in the states before shipping out to Bristol, England, in October 1943.

“I got close to him because he happened to be one of the good guys,” Mills said. “He didn’t get into a lot of stuff. You called on him to watch your back, and you couldn’t have anyone better than him to do that.”

Mills smiled as he recalled a lighthearted moment with Morton and four other friends during the latter part of May 1944, while they were still in England.

“We were in the staging area to cross the channel at Tidworth, when we got a pass to go to a small town nearby for the weekend,” Mills said. “We found a little restaurant, and each one of us ordered something different.”

But Mills said when the food came, all of it consisted of chicken pot pies.

“Howard got agitated,” Mills said. “That’s not what he wanted. But he couldn’t return it. That’s all they had. We kidded him for a while about that.”

“We had a sharpshooter, Seth Williams of Iron River, Mich., who used a 1903 Springfield Rifle with a 10-power scope,” Mills said. “We called on him when we needed a long shot. But a German sniper took him out.”

The company marched on, fighting through the hedge rows in late July, arriving in Paris on Aug. 29.

But the toughest test lay ahead. The Germans surrounded Mills and the company of 200 men in Luxembourg, on the German border, during the Battle of the Bulge. The Americans surrendered Dec. 18, 1944, after getting down to six rounds of ammunition.

“We eventually marched to the Polish border, where we could hear Russian artillery coming in,” Mills said. “The Germans probably didn’t want the Russians to get us, so they started marching us back toward the American front. The Second Armored Division liberated us April 13, 1945.”

Mills returned home to put aside the hardships and resume his job as a piano salesman. But there was an interruption.

“They stopped making pianos for a while,” he said. “So I worked two years at Sherwin-Williams in Florence while I waited.”

He capped a 48-year career selling pianos, dating back to when he was in high school, 25 years for Forbes of Decatur and Birmingham, and 23 years with Traylor Music Co. of Huntsville. He retired in 1983.