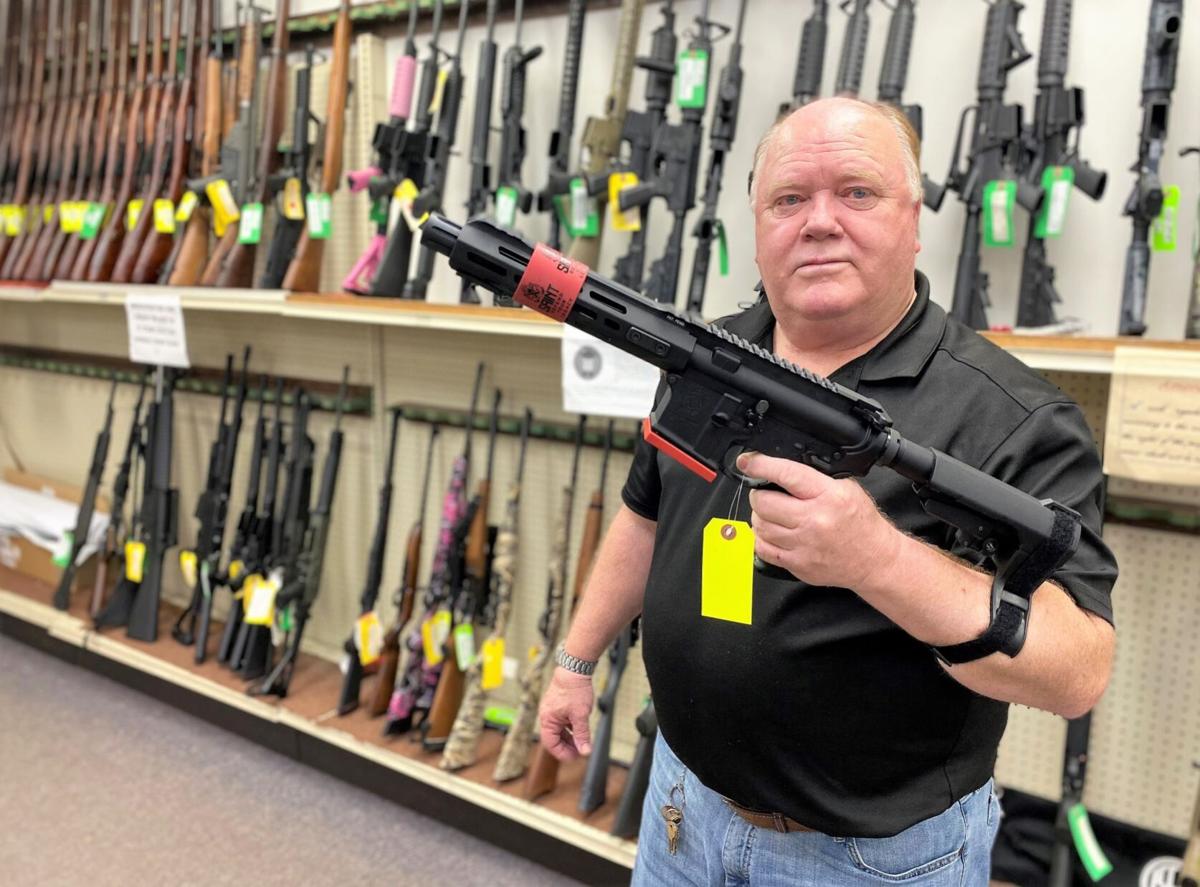 Howard Godbee, manager at Mid-City Pawn and Guns in Decatur, holds a Springfield AR pistol as he shows the proper way to use a pistol brace. President Joe Biden has promised to crack down on the braces, one of which was used in a Colorado mass shooting last month. [MICHAEL WETZEL/DECATUR DAILY] 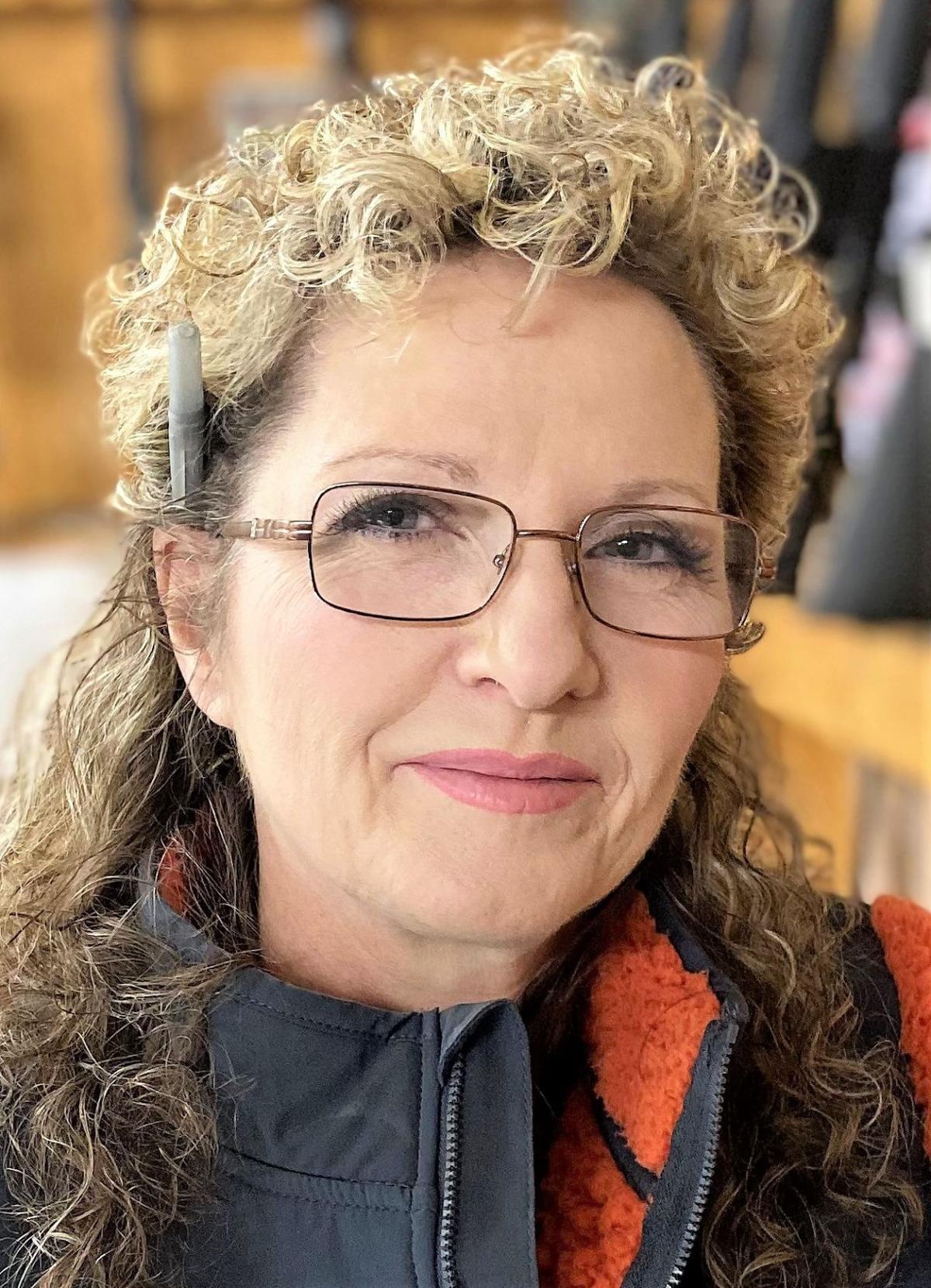 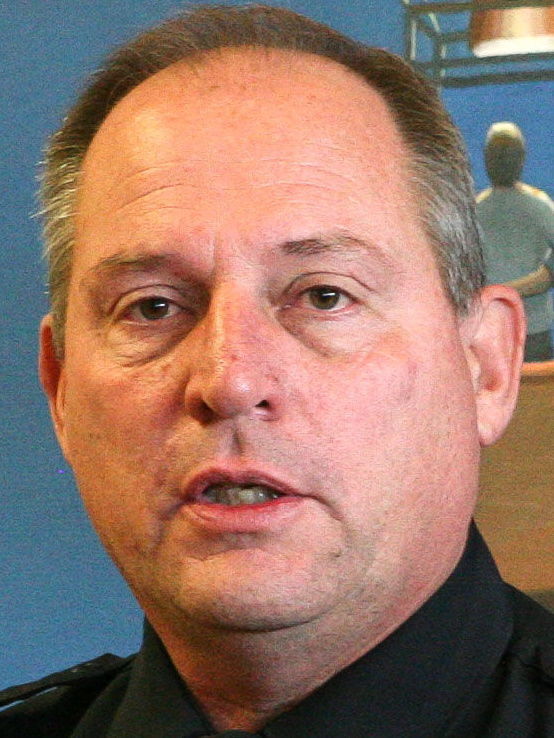 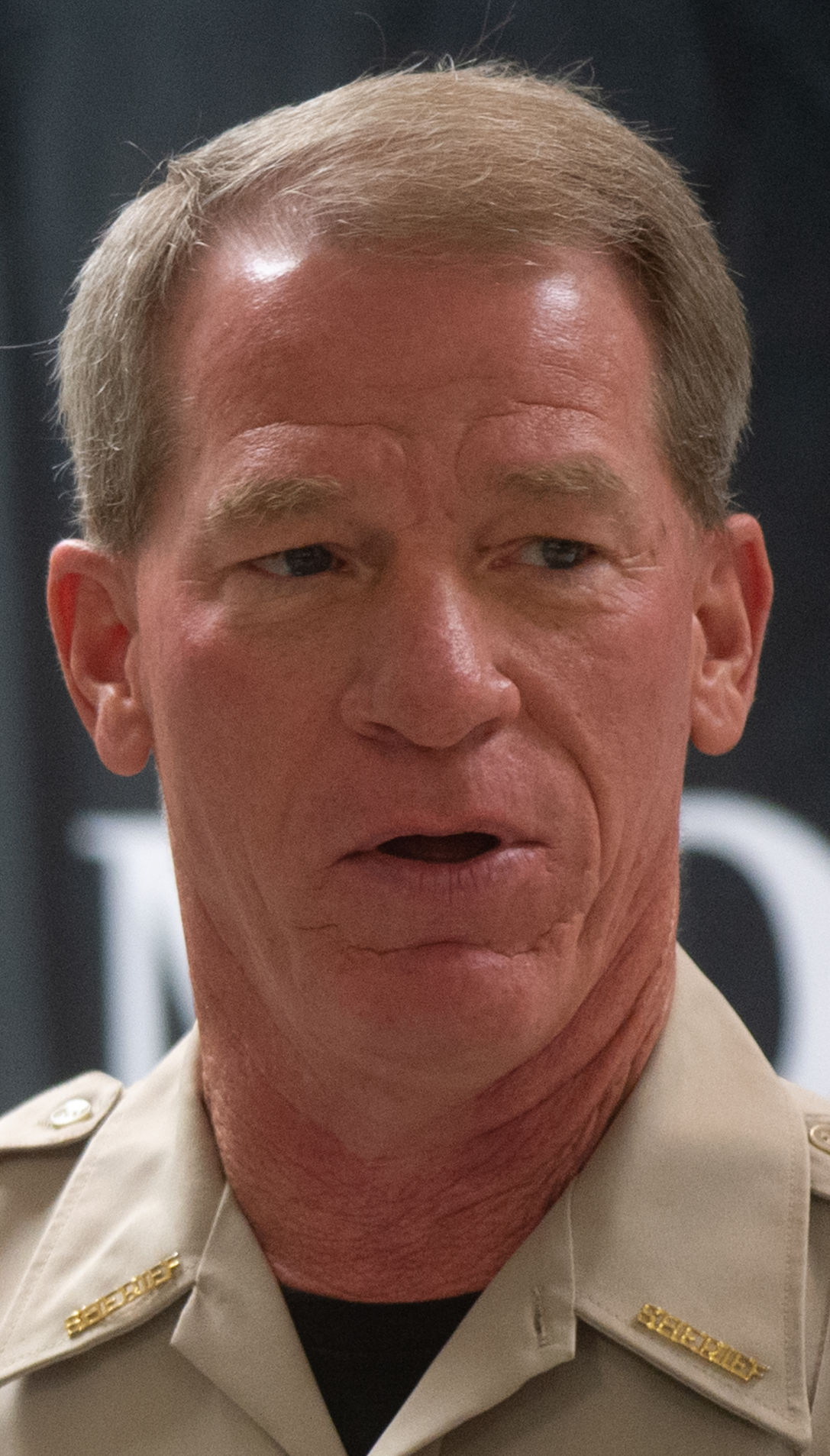 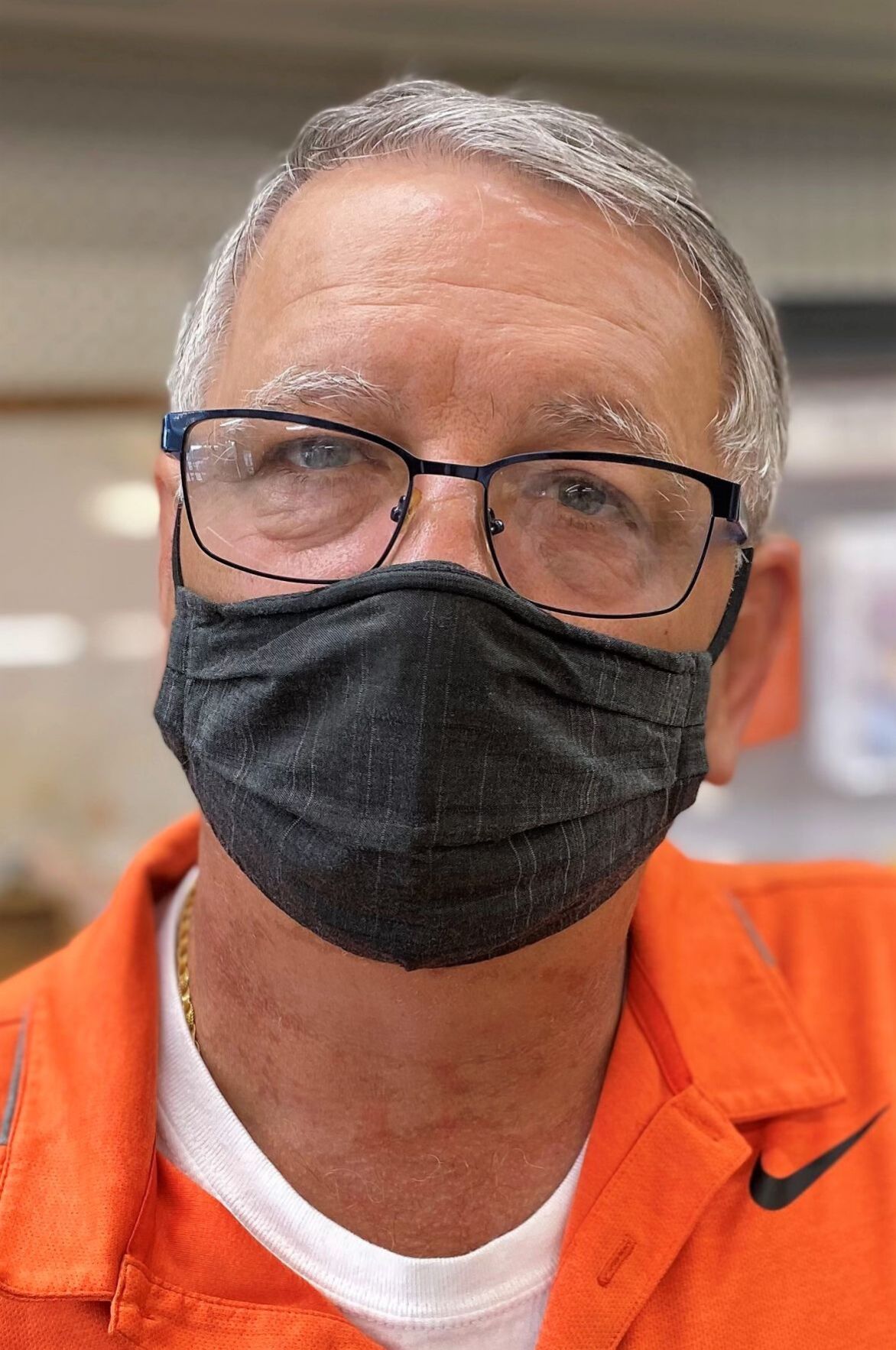 There's some good and some bad in White House gun control efforts, according to local law enforcement and gun dealers, but at least one dealer figures the main impact of the renewed national debate is to push more people to buy guns.

Howard Godbee, manager at Mid-City Pawn and Gun in Decatur, said the federal government is in a “no-win situation” when it talks about gun control. He is seeing first-time gun buyers coming into his shop with their federal stimulus checks.

“They ought to be using that money to get caught up with their bills, get a dependable car, clothes for their kids, but instead they’re in here buying guns and ammo,” he said. “They’re trying to buy (the weapons) while they can. The government is giving people $6,000, $7,000, $8,000 checks who come in here buying $1,200 guns. (The government) is creating the demand by saying they want to remove certain weapons from the market. People aren’t coming in to buy a shotgun for hunting.”

More than 2 million firearms were bought in January, according to The Washington Post, an 80% year-over-year increase and the third-highest one-month total on record.

Area law enforcement officers said President Joe Biden’s executive orders, announced Thursday, include some positive steps on gun control, but they emphasized that the criminals inclined to use guns for violence will ignore gun laws.

Biden also asked the Department of Justice to publish model “red flag” laws for states to use as a guide. Red flag laws will allow family members and law enforcement agencies to ask courts to temporarily block people from obtaining firearms if they are seen as a danger to themselves and others. Biden said states with red flag laws have seen a decrease in suicides.

Athens Police Chief Floyd Johnson said those for and against gun control both have important perspectives.

“But gun laws have to enforced or they won’t be respected,” he said. “Both sides need to sit down at the table and address this. If they don’t, we as a country will be going down the wrong path. ... We’ve got to change the behavior of some people.”

A step in the right direction, he said, would be to give judges more discretion in cases involving gun violence.

"I trust judges to do their job," he said. "They’re elected by the people.”

Lawrence County Sheriff Max Sanders said he doesn’t want to deny anybody their gun-ownership rights, but it is prudent to do so in some cases.

“The sheriff's department has the right to deny someone getting a pistol permit depending on their history with domestic violence,” he said. “We look at it on a case-by-case basis. I don’t want to deny anybody their rights. I believe in the Second Amendment. We have enough (gun control) laws on the books. They just need to be enforced.”

He said there have been times when his department has denied applications for pistol permits because of the applicant's criminal record.

"I support the Second Amendment and believe Americans should be able to protect themselves and others,” he said. “We have seen the benefits of a ‘good guy’ with a gun in numerous shootings across the country and already have checks in place when it comes to legally purchasing a gun. Unfortunately, those that want to cause harm with a gun do not care about our laws or gun control measures.

“While gun control continues to be pushed, what we really need is mental health resources. A gun will only do what the person holding it wants it to.”

Godbee said he applauds the president for trying to make the nation safer but said it will not be easy.

“Mental health is part of the background check,” said Godbee, a former police officer and mental health worker. “The new mental health reporting by local police bothers me. Allowing an officer to decide is a mistake; it’s a bridge too far. You’ve just turned an officer into something that a judge ought to decide. We have some overzealous people in law enforcement.

"An officer goes to a domestic disturbance and says one of the individuals needs counseling. That could prevent that individual from getting a gun. They are denying rights to that person. We need to let a professional decide their overall mental health, not law enforcement."

“Saying red flag states have a lower suicide rate is simply misleading,” he said. “If they want to kill themselves, they don’t need a gun. They can be in a car wreck, house fire, overdose on drugs.”

“My concern is the mental health issue,” he said. “Do all local mental health authorities report to NICS? If the individual is on schizophrenia meds and I know it, I won’t sell him a gun. I don’t have to give a reason, either."

Melvlyn Crowden, manager at Bama Pawn and Guns in Decatur, said the Bureau of Alcohol, Tobacco, Firearms and Explosives has been diligent in keeping guns in the right hands.

“I went to a training session a couple of years ago hosted by the ATF,” she said. “I can say the ATF has stepped up their game. They now have the purchasers’ mental health records."

She said public misperceptions are driving some gun control efforts.

"There’s a large influx of people who think buying a gun is easier than it is," she said. "There’s a lot of fake news out there about getting a gun. I don’t know how they can tighten the background checks. But whatever they do will be bad for the gun business. We’re getting a bum rap. … There are plenty of laws in place. For licensed dealers, there is no way to circumvent the system.”

The gun dealers support Biden’s executive order banning the production of “ghost guns,” which are made from kits and oftentimes don’t have serial numbers, but say the order will have minimal impact.

“Ghost guns are overblown," Godbee said. "You can order 80% of a gun, but the receiver will need some milling. I’ve heard people say those kits can be assembled in 30 minutes. I don’t think they can in under several hours. But yes, they need to be eliminated.”

Biden also announced he would issue an executive order restricting the use of pistol-stabilizing braces like the one used in Boulder, Colorado, in a shooting last month that left 10 dead.

The gun dealers said the White House is sending out misinformation.

“Pistol braces are not a big issue,” Crowden said. “We might sell six a year. It doesn’t make the gun any better, just like the bump stock didn’t make rifles a machine gun.”

“A pistol brace doesn’t affect the gun’s accuracy. Accuracy depends on the individual not the equipment,” he said. “If you train on the weapon, you won’t need a brace to be accurate.”

Campbell said the brace is designed to help those with certain disabilities to participate in the sport of shooting. He said the braces sell for $80 to $150 each.

The dealers said they require background checks on their sales in their stores, at gun shows and online.

Godbee said that is not entirely accurate. Licensed dealers are required to perform a background check before a sale is OK’d at a gun show. But not all show vendors are licensed gun dealers.

A 2017 survey published in the Annals of Internal Medicine by professors at Northeastern and Harvard universities in 2015 found that 22% of gun owners who bought at gun shows did not have to go through a background check.

Like Godbee, Crowden expects a spike in demand to be the main consequence of Biden's push for gun control legislation.

She said her business is up 40% since April 2019 with most first-time buyers purchasing home-security weapons such as 9mm firearms and pump shotguns. She said shortages of ammunition and guns are limiting her sales.

“It’d be up a lot more if we can get what we wanted. We’re in for four years of an anti-gun government,” she said.

According to a survey conducted by the National Shooting Sports Foundation, roughly 40% — or 8.4 million — of the guns purchased in 2020 were by first-time buyers.

Godbee said online gun sales now account for about 25% of his business, up from 10%. Online purchases are not sent to the buyer's home, he said. The firearm will be sent to a nearby licensed dealer and the buyer will need to fill out a NICS form and have the background check approved before receiving their gun, Godbee said.

Here we go again with al this gun control malarkey. If guns kill people then pencils cause misspelled words.