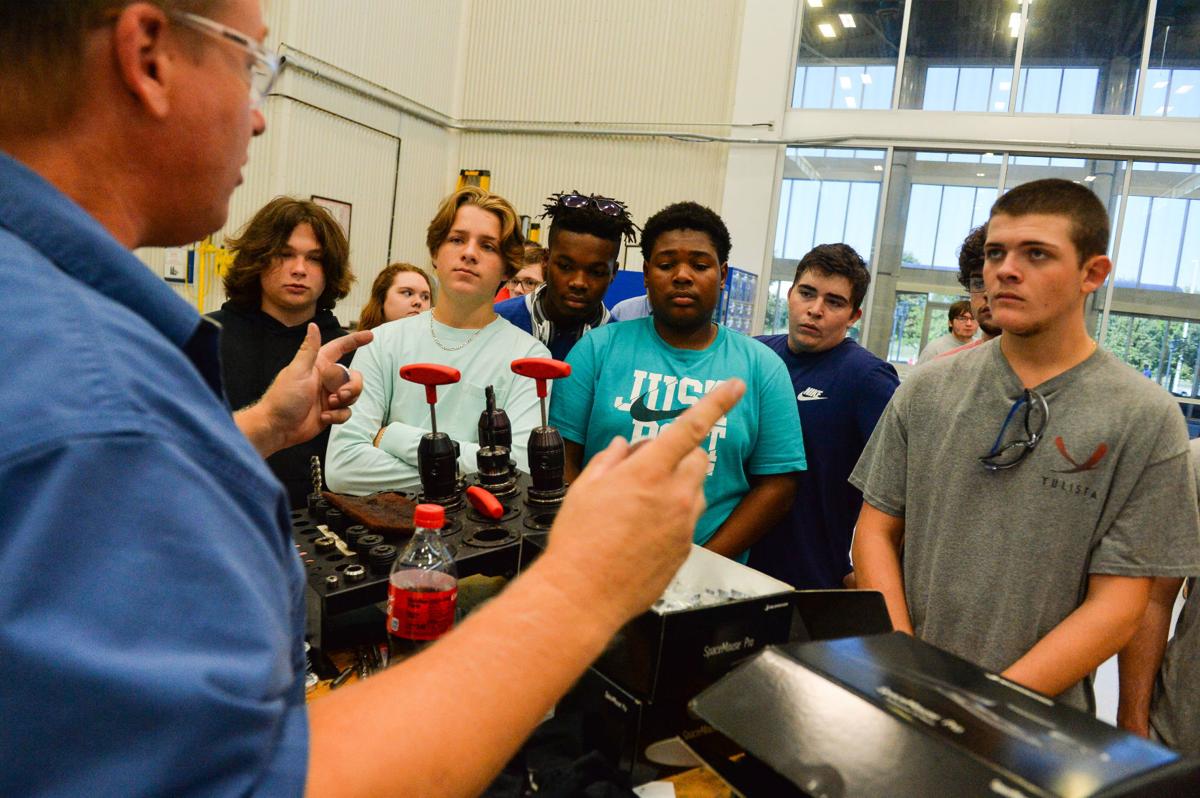 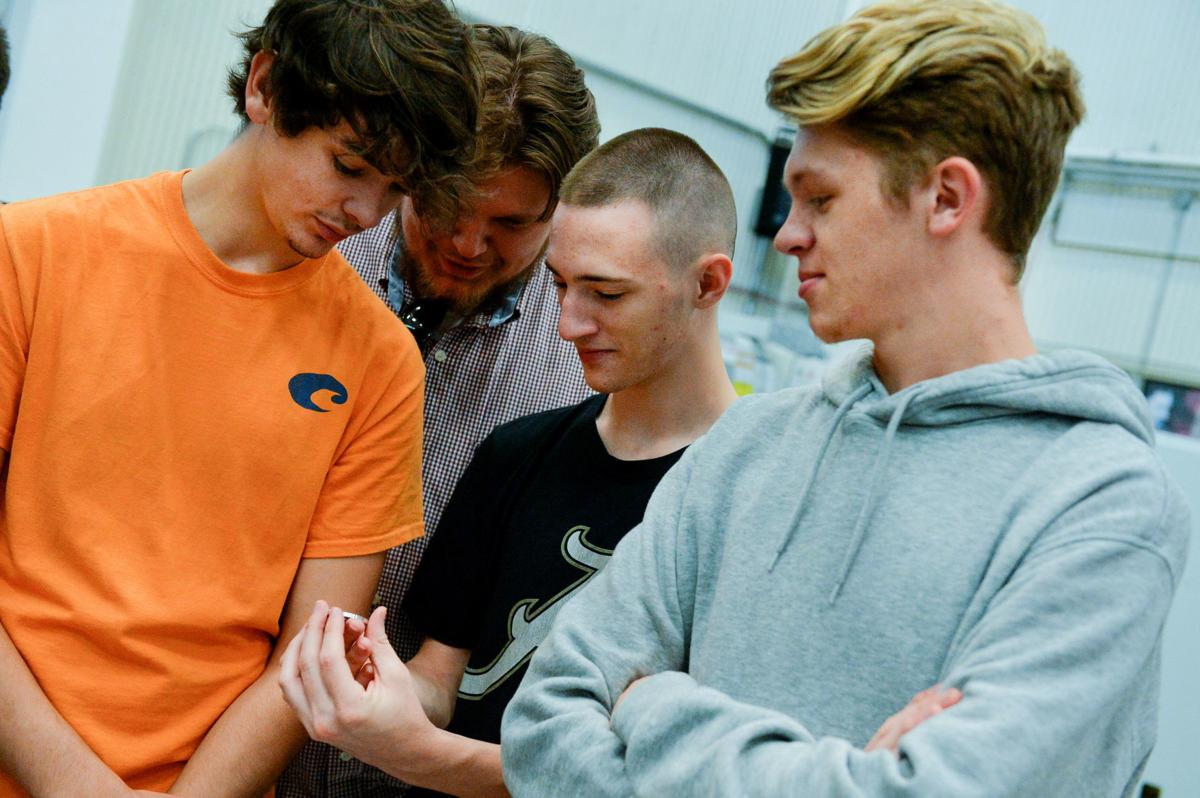 Hartselle High students, from left, Caleb Kelley, Avery Maples, Leaph Bolan and Blake Lovett look at a token made by one of the machines in the computer numerical controls room at Calhoun Community College in Decatur on Thursday. [CRYSTAL VANDER WEIT/DECATUR DAILY] 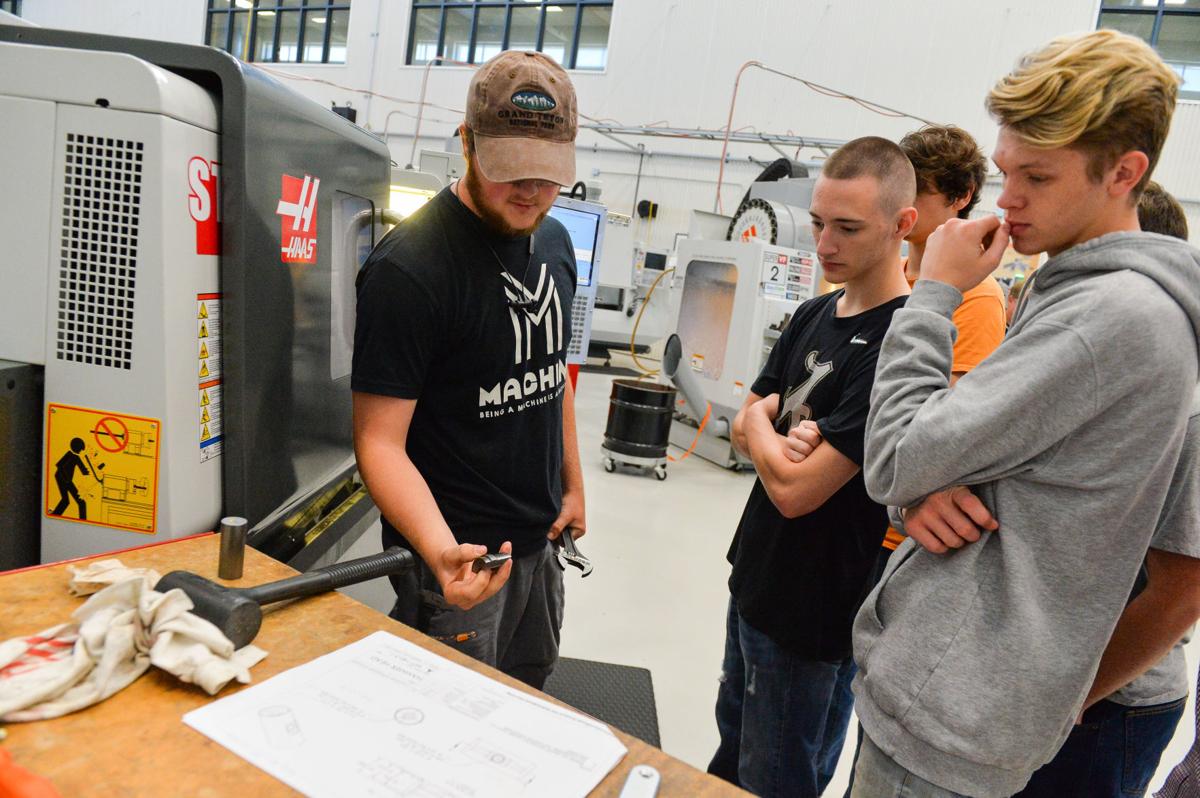 Hartselle High students, from left, Caleb Kelley, Avery Maples, Leaph Bolan and Blake Lovett look at a token made by one of the machines in the computer numerical controls room at Calhoun Community College in Decatur on Thursday. [CRYSTAL VANDER WEIT/DECATUR DAILY]

In the next three to five years, thousands of new manufacturing jobs are expected to come to the Decatur area, which school and industry leaders say is increasing the demand for a qualified workforce to be in place.

Calhoun Community College — with the support of local industry partners — opened its doors to more than 700 students Thursday who participated in hands-on activities and were exposed to some of the best-paying jobs in the state.

“It’s critical that students explore opportunities that are available and will become available for them,” said Jeremy Nails, president of the Morgan County Economic Development Association.

That’s exactly what Austin High seniors Jay Mitchell, Lawson Farris and Francisco Gonzalez said they came to do. They are in the machining class at Austin and Mitchell already has a job offer for when he graduates.

“But I want to see what else may be available and what credentials I’ll need,” Mitchell said.

Nails said Mazda Toyota Manufacturing USA's announcement that it would build a $1.6 billion manufacturing facility in Huntsville-annexed Limestone County has been a game-changer in an area that already has a low unemployment rate.

He said the demand for qualified workers “will be significant,” and it’s important for students to know what they will need to do to “get the good-paying jobs.”

“We also have existing companies ramping up production and expanding,” he said.

“With the growth of manufacturing in Alabama continuing to rise, the demand for maintenance and repair workers will rise as well,” said Alabama Department of Labor Secretary Fitzgerald Washington.

John Holley, dean for technologies at Calhoun, said Thursday’s event was designed to expose high school students to high-wage career opportunities that exist in the region and to explain how Calhoun can help prepare them to successfully enter the workforce.

The senior said he recently realized that he's not sure he wants to be an aerospace engineer, once his career goal, and his second choice of producing online videos may not generate enough income.

“I like to work with my hands,” Hill said.

Owens said representatives with four local industrial plants serve on the machine technology advisory board and the curriculum is built around “what the plants tell us they need.”

He said a former Calhoun student is currently programming welding robots at Polaris and several others are employed in local businesses.

“All the students in our program who want a job are employed,” Owens said.

Jeff Hyche, who is career tech instruction planner for Hartselle City Schools, said demand is high for qualified workers in manufacturing. He said bringing students to Calhoun eliminates the perception that plants are “dirty places” to work.

“They are here and they can see what the plant work environment will be,” he said.

“We can teach them in the classroom, but there’s nothing like real-life exposure,” she said.