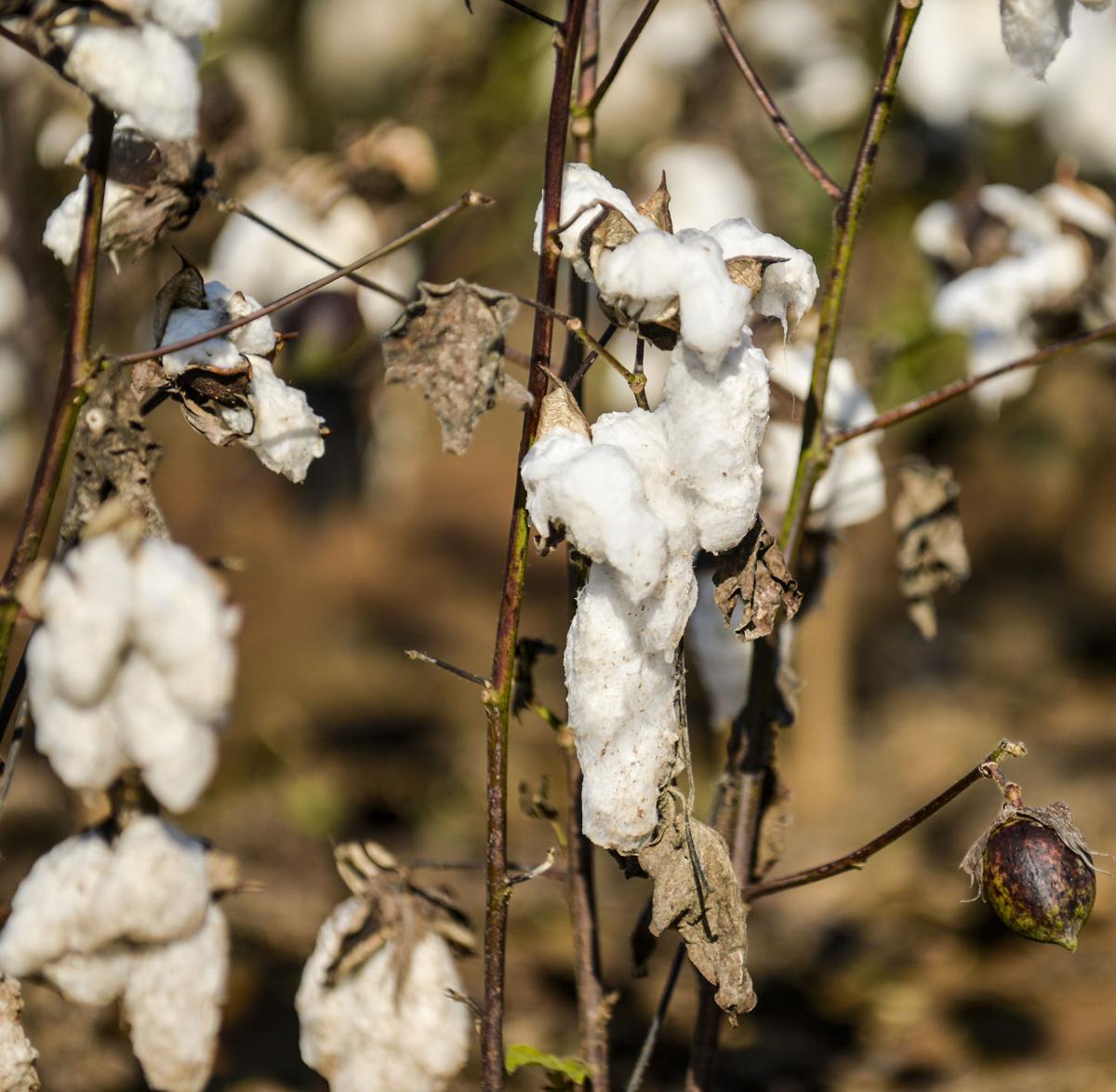 Weather this year has impacted the growth and harvesting of cotton such as bolls drying out this week in a field near Mooresville. [JERONIMO NISA/DECATUR DAILY] 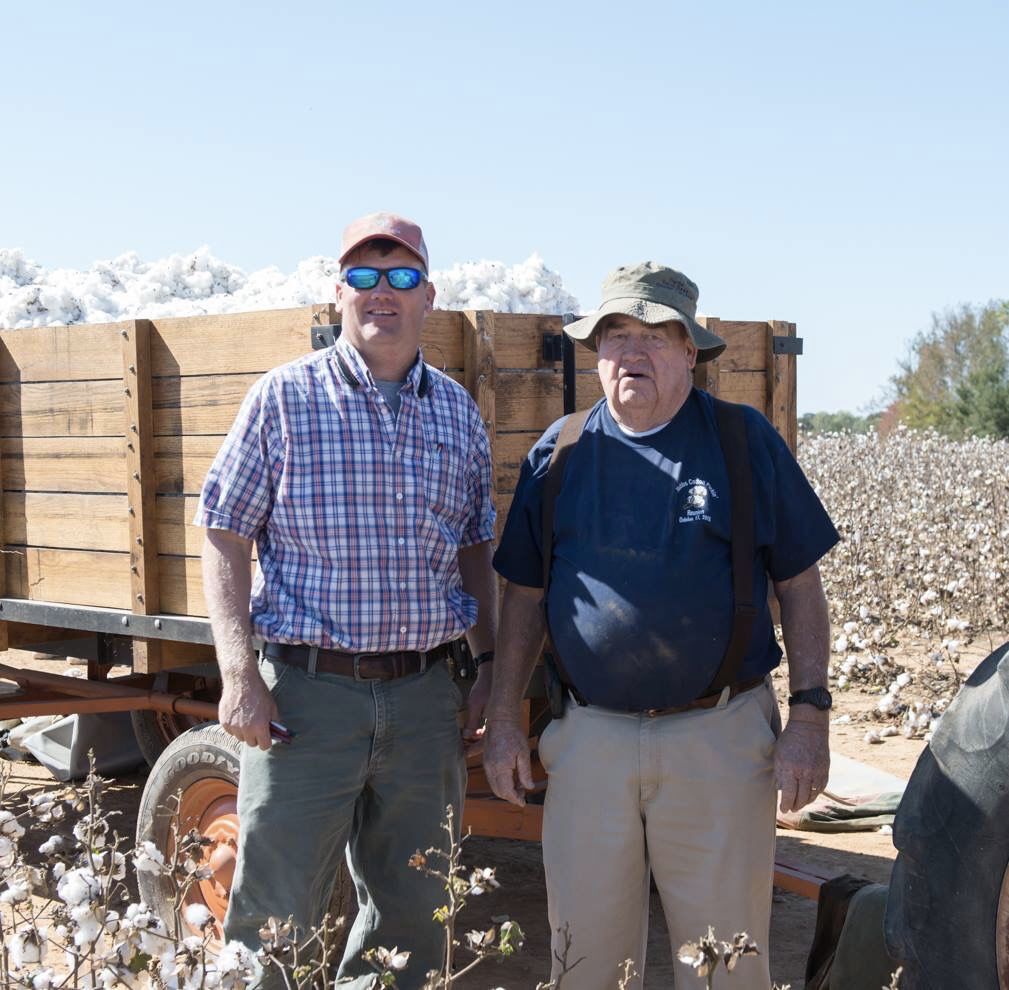 Jessie Hobbs, left, and his father look at a field of cotton while standing next to a weigh wagon during a previous harvest. The Hobbs family will hold a nostalgic event at its farm to hand-pick a bale of cotton Saturday in Elkmont. [COURTESY PHOTO] 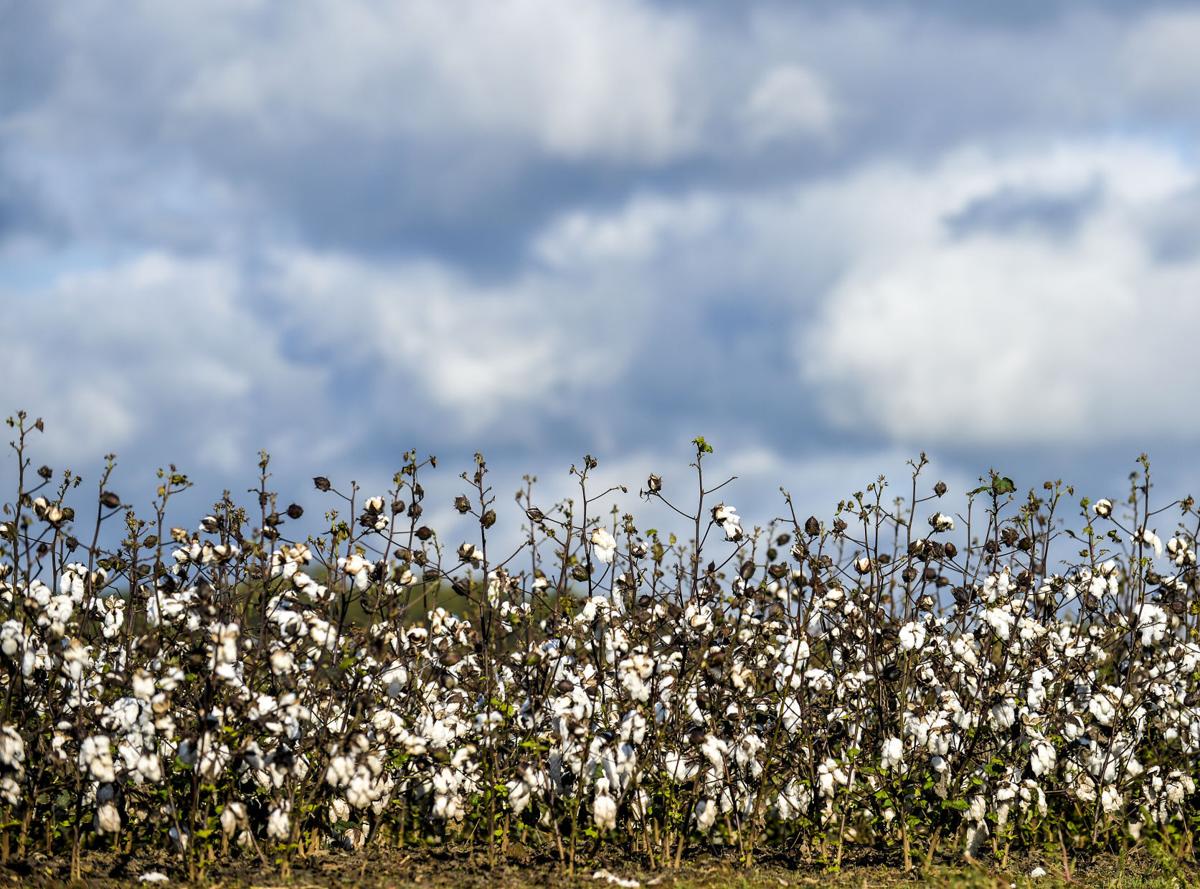 Cotton grows this week in a field near Mooresville. The yield this year could be down 200 to 300 pounds per acre in Limestone County, according to an extension agent. [JERONIMO NISA/DECATUR DAILY]

Weather this year has impacted the growth and harvesting of cotton such as bolls drying out this week in a field near Mooresville. [JERONIMO NISA/DECATUR DAILY]

Jessie Hobbs, left, and his father look at a field of cotton while standing next to a weigh wagon during a previous harvest. The Hobbs family will hold a nostalgic event at its farm to hand-pick a bale of cotton Saturday in Elkmont. [COURTESY PHOTO]

Cotton grows this week in a field near Mooresville. The yield this year could be down 200 to 300 pounds per acre in Limestone County, according to an extension agent. [JERONIMO NISA/DECATUR DAILY]

Andy Page, row crop extension agent for Auburn University, said in addition to increased rainfall this fall, which delayed the harvest in north Alabama, weather conditions have been poor for cotton farmers since the crop was planted in the spring.

“Weather conditions were wet and cool during the early part of the growing season, which delayed overall maturity of the cotton crop. Conditions looked great going into the month of July. Unfortunately, many dry land cotton acres across the valley did not receive very much rainfall between mid-July and mid-August,” Page said.

Page said the lack of rain during the summer will likely decrease yields for cotton farmers.

Mark Yeager, farmer and owner of Red Land Cotton in Lawrence County, said the remnants of Hurricane Delta produced 4 inches of rain in one weekend during what was already a particularly rainy fall.

“The rain is hurting the quality of the cotton and the yield,” Yeager said. “The rain that we got from what was leftover of the Hurricane Delta, it was not welcome at all.”

Yeager said in a normal year, harvesting the 3,500 acres of cotton he planted last spring would be well underway by mid-October, but they’ve been unable to pick anything yet.

“We haven’t harvested an acre and it is Oct. 13th, so it’s very unusual, very late.”

Yeager said he’ll start picking cotton in the next few days, and is hoping for good weather in the meantime.

“Everybody needs to hope for clear skies and clear weather,” he said. “Hopefully, we can start (harvesting) within a few days, when it dries up. Right now the fields are very wet … within a week things will get going.”

Page said this year’s cotton yield throughout the Tennessee Valley will be hard to predict “until the picker runs through the field,” but that he expects an average of 850 to 900 pounds harvested per acre planted throughout the area this fall.

“Those acres more than likely were planted in corn (instead of cotton) this year,” Page said.

In addition to the weather, the COVID-19 pandemic also has impacted this year’s cotton harvest by affecting demand. Yeager said the price of cotton crashed last spring when the pandemic first hit, and prices remain relatively low. However, they have increased slightly in the past few weeks, Page said.

“(The current) price of cotton is similar to this time last year. On a positive note, cotton prices have slightly increased since the first of October from 64 cents per pound to 69 cents per pound,” Page said.

Page said aside from temporarily bringing the price of cotton down, the pandemic has had a limited impact on growing the crop for farmers in north Alabama.

“The only complications that I know of caused by the pandemic for farmers is back-ordered parts for farm equipment and other farm supplies that might be delayed in the spring. Also, cotton marketing in the future could be affected after this crop is ginned,” he said.

Despite the challenges facing this year’s harvest, Jessie Hobbs, owner of Hobbs Farm in Elkmont, said he’s looking forward to gathering the community for a cotton hand-picking event at his farm this weekend.

The event starts at 9 a.m. Saturday, and Hobbs said his family, friends and anyone else who wants to join will be tasked with picking a bale of cotton by hand. He said this will be the sixth iteration of the family tradition that started in 1994, and the first time he’s held the event since 2015. He said the purpose of the event is for people to put their cellphones away and spend time together, while working hard for a good cause and picking cotton without machinery, the same way Hobbs’ great-great-grandparents once did.

“The cotton will be sold and proceeds (will) be donated to (Elkmont United Methodist Church),” Hobbs said. “We started in 1994, and then we lost my grandmother in '98, and we did it again in 2000 because dad wanted to say that his family hand-picked (cotton) in two centuries,” Hobbs said. “Since then, we’ve done it three more times, (in 2005, 2010 and 2015). ... I’m fortunate to be the fifth generation up here ... My dad had the idea. He wanted his family to pick as a family unit, wanted everybody to get together and come back. He and my grandmother decided to have a hand-picking.”

Hobbs said he expects upwards of 75 family members, as well as church friends and anyone from the general public who wants to join, to come pick cotton. He said with that many in attendance, an entire bale could be picked by noon. Hobbs said masks will be provided and social distancing will be maintained during the event, and that lunch will be served in grab-and-go bags to minimize the risk of COVID-19 transmission.

“It’s a good way to just have fellowship,” Hobbs said. “Family is number one. We’ve got engineers, we’ve got school teachers, we’ve got lawyers (in the family), and everybody’s going to put their shoes on, put on some play clothes … and we’re just going to get out there and love on each other and have a good time. (We want to) tell the community and everybody that you can still do things as a family.”