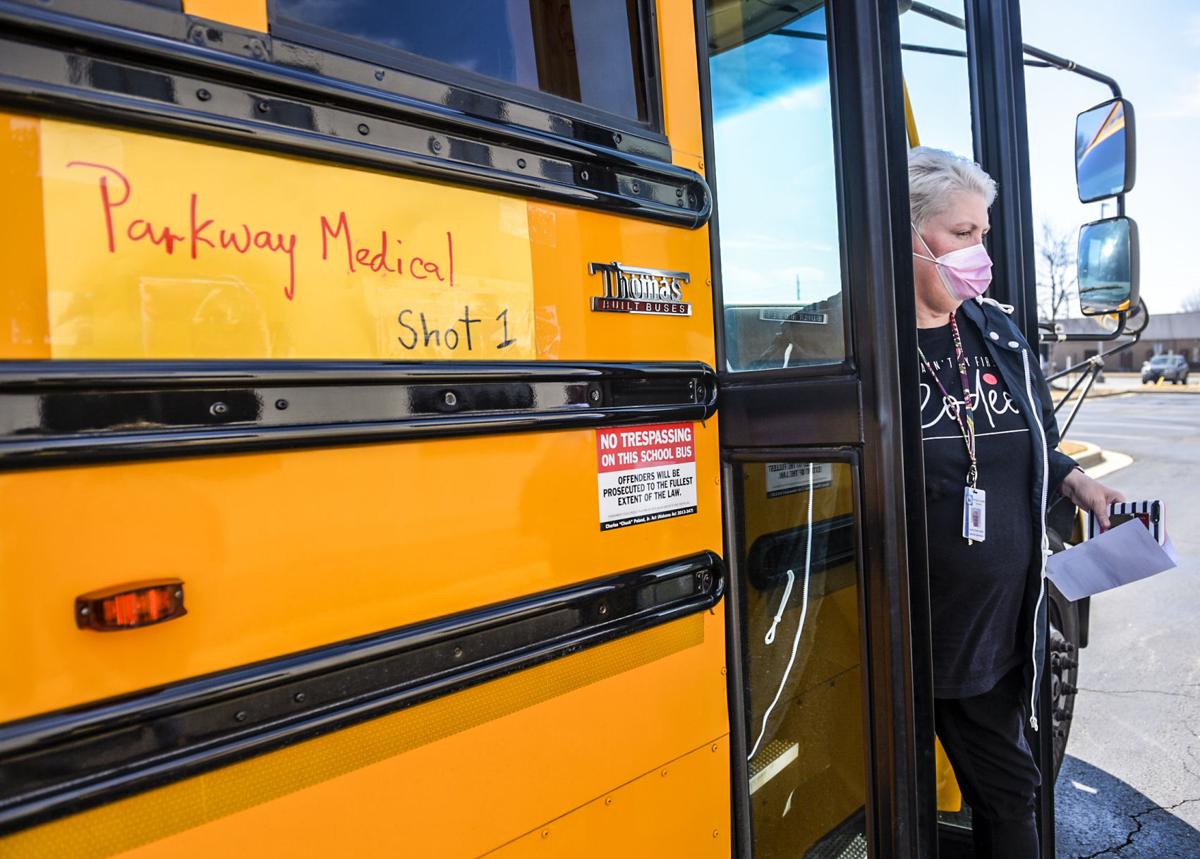 Falkville Elementary School teacher Laurie Smith arrives at the Parkway campus of Decatur Morgan Hospital on Monday where she and other teachers and staff from the three Morgan County school systems were receiving their first shot of the COVID-19 vaccine. The hospital has focused on vaccinating teachers, who were in the group that gained eligibility Monday. [JERONIMO NISA/DECATUR DAILY] 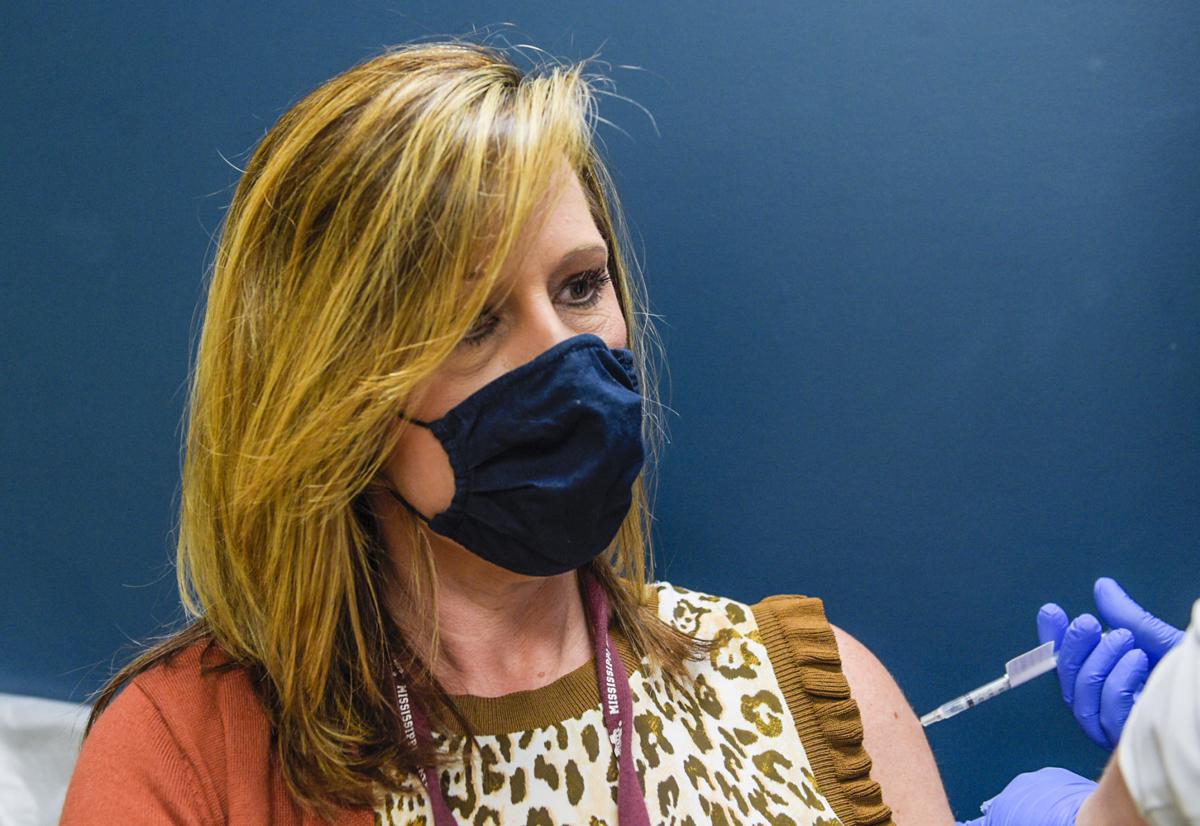 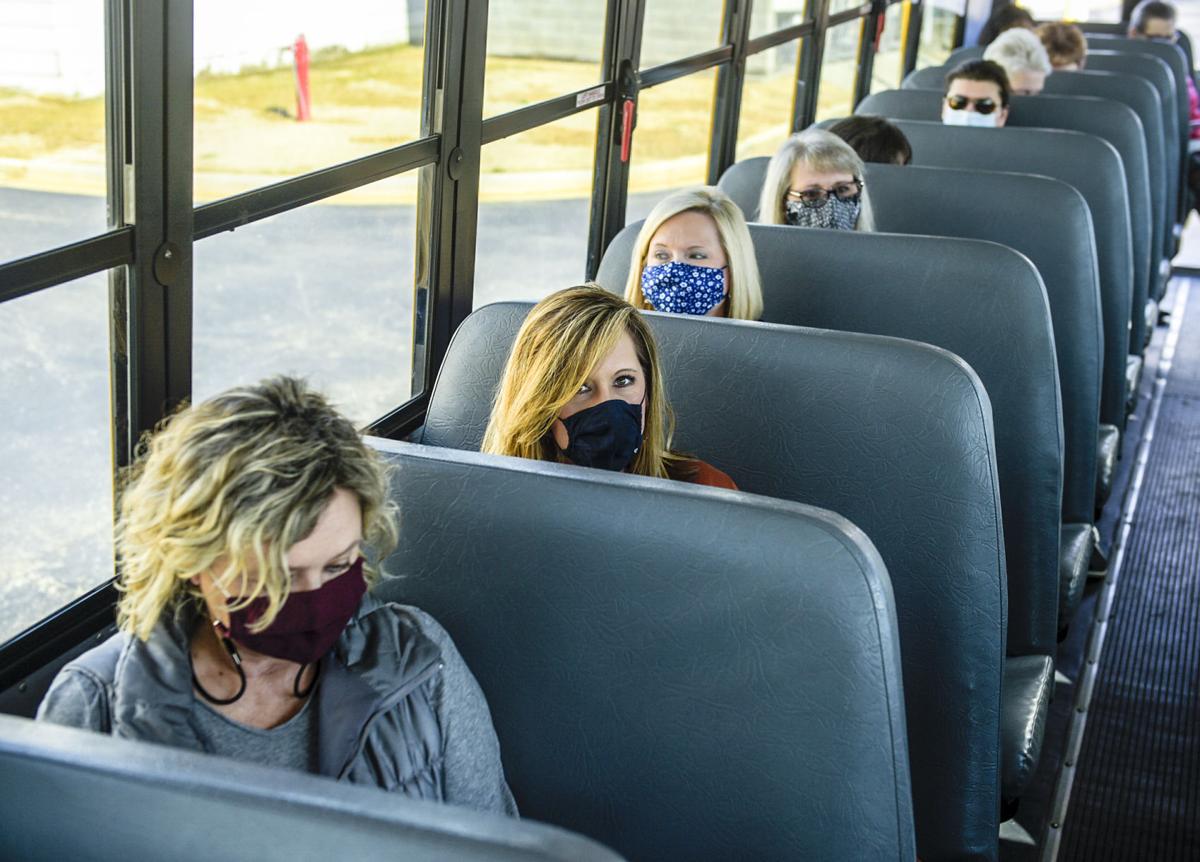 A group of Morgan County Schools teachers wait in a school bus for their turn to be vaccinated against COVID-19 at the Parkway campus of Decatur Morgan Hospital on Monday. [JERONIMO NISA/DECATUR DAILY]

Falkville Elementary School teacher Laurie Smith arrives at the Parkway campus of Decatur Morgan Hospital on Monday where she and other teachers and staff from the three Morgan County school systems were receiving their first shot of the COVID-19 vaccine. The hospital has focused on vaccinating teachers, who were in the group that gained eligibility Monday. [JERONIMO NISA/DECATUR DAILY]

A group of Morgan County Schools teachers wait in a school bus for their turn to be vaccinated against COVID-19 at the Parkway campus of Decatur Morgan Hospital on Monday. [JERONIMO NISA/DECATUR DAILY]

Nursing home residents account for a large percentage of local COVID-19 deaths, according to state and federal data, but a nursing home owner said that even as vaccine eligibility broadened Monday flaws in the federal program for nursing home vaccinations remained.

A total of 102 nursing home residents had died from the disease in Morgan, Lawrence and Limestone counties as of Jan. 24, the most recent data available from the U.S. Centers for Medicare and Medicaid Services. As of Jan. 24, the total COVID-19 death toll for all residents of the three counties was 278.

While numbers are inexact due to differences in the way CMS and the Alabama Department of Public Health record the data, that suggests nursing home residents accounted for almost 40% of local deaths through Jan. 24 — even though they account for about 0.3% of the three-county population. As of Monday, the combined COVID-19 death toll for all residents of Morgan, Lawrence and Limestone counties was 415.

Frank Brown, owner and CEO of USA Healthcare, the parent company of Decatur Health and Rehabilitation and Falkville Health Care Center, said many nursing home residents have multiple health problems even before the virus makes its way into a facility.

Because of their high COVID-19 mortality rate, the federal government set up a separate program for CVS and Walgreens pharmacies to administer vaccines to long-term care residents. They were in the first phase of people eligible to receive the vaccines, along with health care workers.

The pharmacies in the federal program are administering Pfizer vaccines at each long-term care facility through three clinics held 28 days apart, and at least two of those clinics have been completed at most local nursing homes.

So far so good, said Brown, whose nursing homes began receiving vaccines Jan. 5. The problem both for his facilities and others, he said, is there are no plans for additional clinics.

It’s a major problem, he said, because residents and staff who had tested positive for COVID-19 could not get the vaccine for 90 days after their positive test. Because new infections were rampant in the community and especially in nursing homes in the 90 days before the clinics began, that ruled out many. While a previous coronavirus infection provides some protection, data is unclear as to the extent or duration of that protection.

“We came off of some pretty serious problems back in late November, December and early January,” he said, due to community outbreaks that resulted in transmission among nursing home employees and residents. “We’re pretty much COVID-free in the company now,” he said, but the 90-day delay prevented many staff and residents from getting vaccinated.

Moreover, neither Brown’s residents nor his new staff are static. As new residents and new staff come into his facilities, they may not have been vaccinated.

“There’s no plan for follow-up for new patients or new employees,” Brown said. “We’re trying to negotiate with the Alabama Department of Public Health about how we may do that. We just need a constant supply so that we can deal with people as they become more receptive to taking it and folks that are new in our buildings.”

Complicating the issue even more, Brown said fewer than 60% of the employees in his facilities have generally agreed to receive the vaccinations, which is similar to reports on the rates at long-term care facilities nationally. Brown said he even gave bonuses to those who took the vaccine. Those who changed their minds after the second clinic are out of luck under the federal vaccination program, and obtaining vaccines elsewhere is a challenge due to the state’s limited supply.

Statewide, CVS had administered 21,222 vaccine doses in Alabama nursing homes as of Friday, including second doses to 95% of participants. Walgreens did not provide a breakdown for the state, but according to ADPH a total of 86,775 doses have been delivered to the state under the federal long-term care program.

Brown said his facilities test every employee with a rapid test before they start each shift, but the lack of reliability of the tests has also caused problems. He said about 6% of employees receive false positives — meaning a subsequent PCR test, considered more reliable, has a negative result. False negatives are an even more significant problem.

“We’ve had people get a negative test when they start a shift and we test them before they leave work because they’re not feeling well and they test positive before we get them out of the building,” he said.

While health care workers and nursing home residents and employees were in the initial phase eligible for vaccines in the state, the eligible group expanded Monday.

The expanded eligibility added people 65 and older to the list, along with people with preexisting conditions that placed them at high risk of complications from the virus and various categories of front-line workers at greatest risk of exposure.

Decatur Morgan Hospital CEO Kelli Powers on Monday said it has focused on vaccinating teachers, who were in the group that gained eligibility Monday. School buses with masked and distanced school employees were pulling up to the Parkway campus Monday as first doses were administered.

“We need to get some normalcy back as much as possible. I think getting the teachers vaccinated will help us with that. We need the kids to go back to school, not only for academic reasons but also for their mental and social health,” Powers said at a news conference Monday. “We are seeing a lot of depression and suicide and things like that. I think helping the teachers get vaccinated will really help the students get back to some normalcy.”

Powers said the hospital received 2,925 doses of Pfizer vaccine last week and hopes to get the same number this week, although she had not received confirmation on the shipment. The hospital is also receiving enough Moderna doses to handle scheduled second doses of that vaccine.

Despite the expanded eligibility, the Morgan County Health Department is administering no first doses for about another month.

Glenn said 3 million doses would be needed to vaccinate the 1.5 million people now eligible for the vaccine statewide, but the state is only receiving 60,000 to 70,000 doses per week. “You’ve got a huge number of people who are eligible and a small number of vaccines that are available.”

He said the Morgan County Health Department is continuing to provide scheduled second doses, but not first doses.

“The Health Department has no available appointments for the rest of February until the second week of March,” Glenn said. “The reason for that is all those folks we vaccinated in January are now due for their second doses, so all of our allocation that comes in on a weekly basis is to satisfy those second doses. … There’s a huge demand, but the supply is just not there.”

“We’ve got almost a half million people dead nationally,” Brown said of COVID-19 fatalities, more than U.S. military fatalities in World War II. “We gave them guns to shoot and kill people and get shot at and be killed, and now we’re just asking people to wear a damn mask and social distance. And we’ve got people that just won’t comply.”