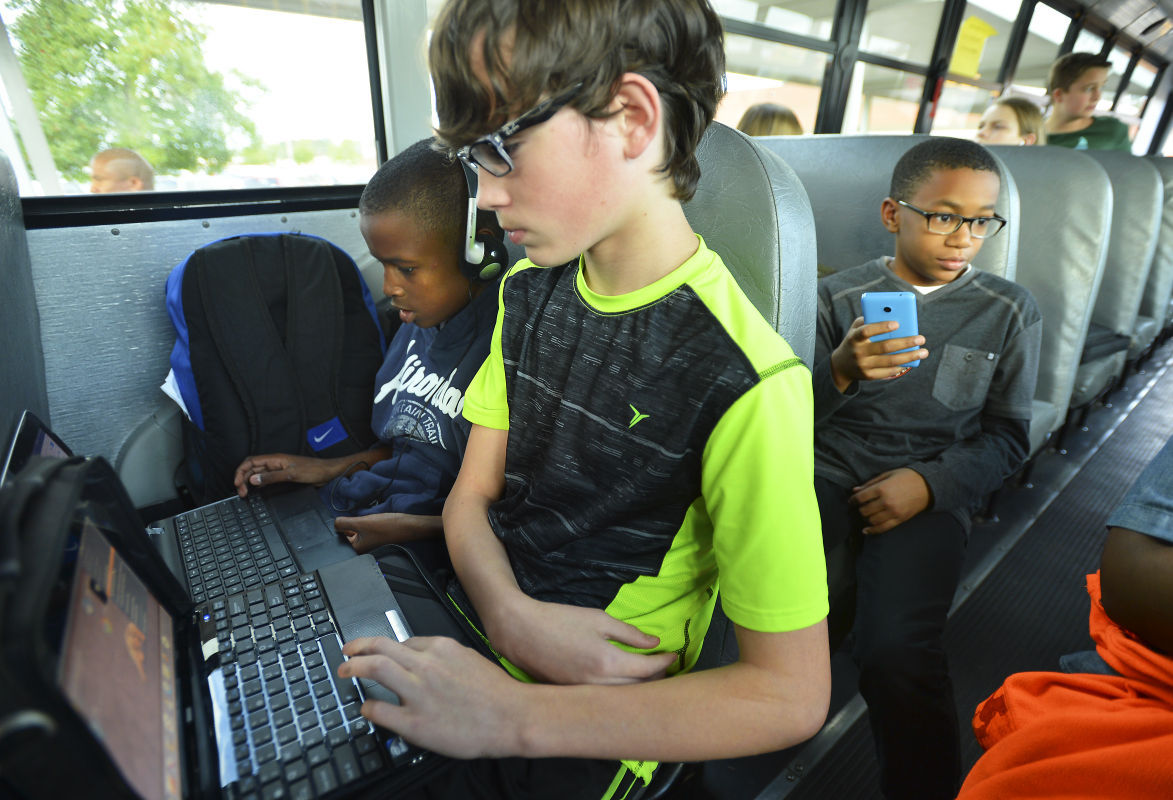 Cedar Ridge Middle School students Destin Ishman, left, and Caleb Terry, center, connect to the Internet on their laptops using the Wi-Fi available onboard Bus 39 while Maurice Laurent, right, uses the Internet on his smartphone. 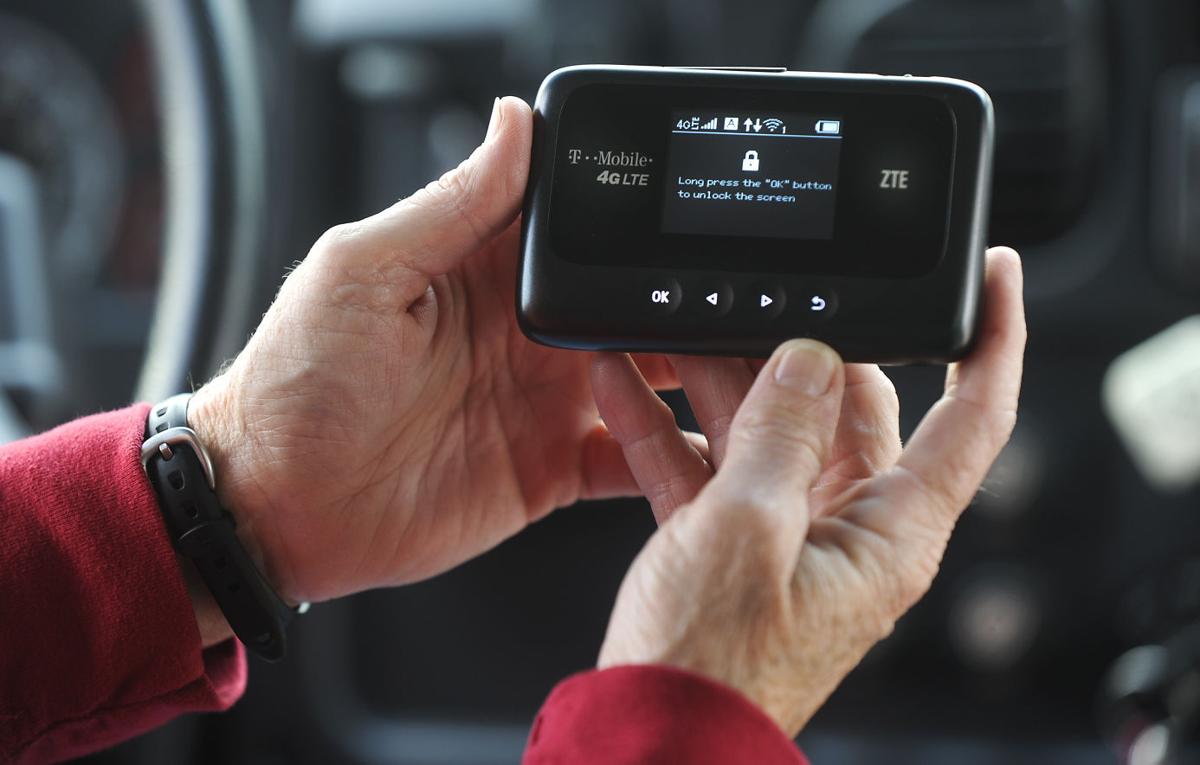 Bus driver Janet Greene holds the Wi-Fi hotspot available in her vehicle as she waits for students to board Bus 39 at Cedar Ridge Middle School.

Cedar Ridge Middle School students Destin Ishman, left, and Caleb Terry, center, connect to the Internet on their laptops using the Wi-Fi available onboard Bus 39 while Maurice Laurent, right, uses the Internet on his smartphone.

Bus driver Janet Greene holds the Wi-Fi hotspot available in her vehicle as she waits for students to board Bus 39 at Cedar Ridge Middle School.

Because of the need to make sure every student has 24-hour Internet access, buses may play a significant role in Decatur City Schools’ plan to change how it delivers education.

“We’re having to be creative in our approach to make sure all our students can access the Internet,” she said.

Rains is part of an 11-member committee that introduced a digital conversion plan in November that would eliminate textbooks, but give students around-the-clock access to the classroom through the Internet.

Making sure every student has access to the Internet is imperative, but pushing to make Decatur a Wi-Fi city may be too costly.

Students at Julian Harris and Cedar Ridge Middle experimented with a device that made a bus a Wi-Fi hub before they left school for the holiday break.

The device, which is about the size of a cellphone, gave students Internet access from the moment they got on the bus until they arrived home.

Juan Morrow, a seventh-grade student, said he got online because he does not always have access to the Internet at home.

“This is a good thing because I’ll be able to use my computer at home anytime I get ready,” he said

Janet Greene, who drove the bus equipped with Wi-Fi, said she noticed a difference in the students.

“They were all excited and behavior was not an issue,” she said. “Some of these kids have told me they don’t have Internet at home, so this is a good opportunity for them to have access to homework.”

If DCS opts to use buses as Wi-Fi hubs near students’ residences, they’ll have to be placed in strategic points throughout the city, Rains said.

The challenge is to identify students who don’t have Internet access at home, she said.

Rains said the committee put several other proposals on the table, including talking with providers about discounted Internet access packages for DCS students and offering free Wi-Fi citywide, as well as opening schools to parents.

Decatur City Council President Gary Hammon said the school district has not talked with the city about bringing Wi-Fi to all of Decatur. He said the issue was investigated about 10 years ago and turned out to be too expensive.

“You’re not talking about something that will cost thousands of dollars,” Hammon said. “This would cost in the millions.”

In November, DCS visited Piedmont City, a rural school district with about 1,240 students that provides laptops for every student in grades 4-12 and uses a combination of methods to make sure all have Internet access.

The school system and city officials used $896,000 in federal E-rate money to establish what they call a “wireless mesh.”

All the students inside the city limits receive free Internet that is paid for with school and city revenue. For those outside the city limits, city and school leaders negotiated a deal with an Internet provider that charges them $15 per month for access to high-speed broadband.

“They were fortunate that the stars aligned for them with the federal money, but the learning environment in the school was amazing,” Rains said.

DCS’ goal is to implement digital conversion by 2018. When it does, the district will eliminate teachers leading lessons from textbooks for a model that would include student-directed learning, which relies heavily on digital material.

“This is where our students are,” Rains said.

so what is this bus wifi going to cost? (left out of article)