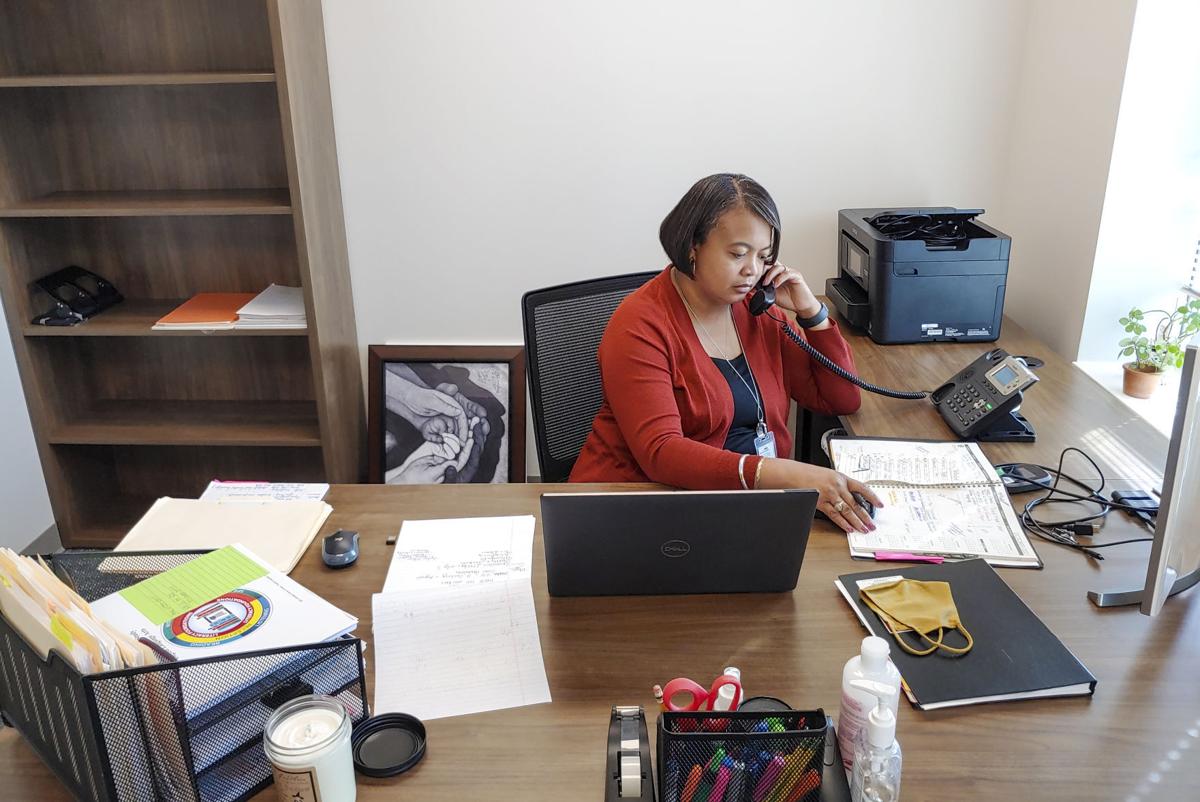 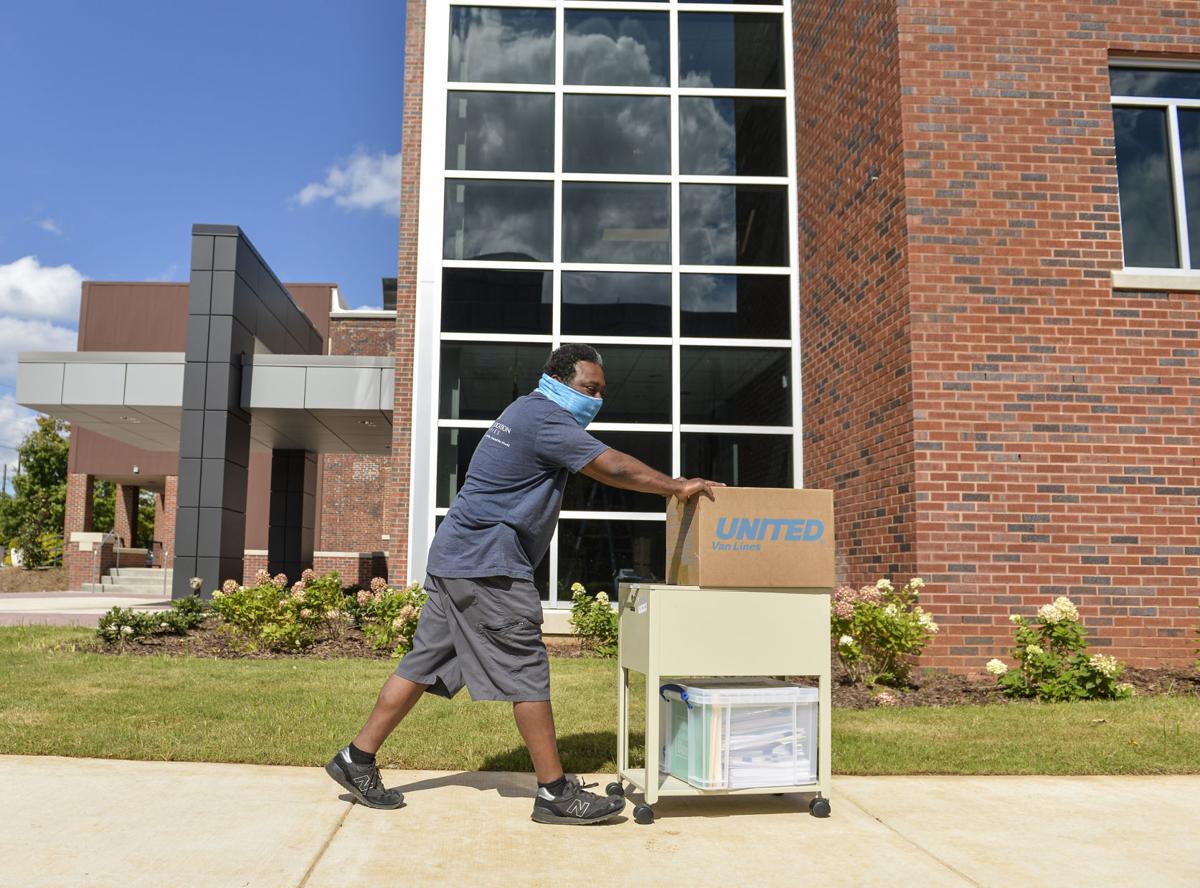 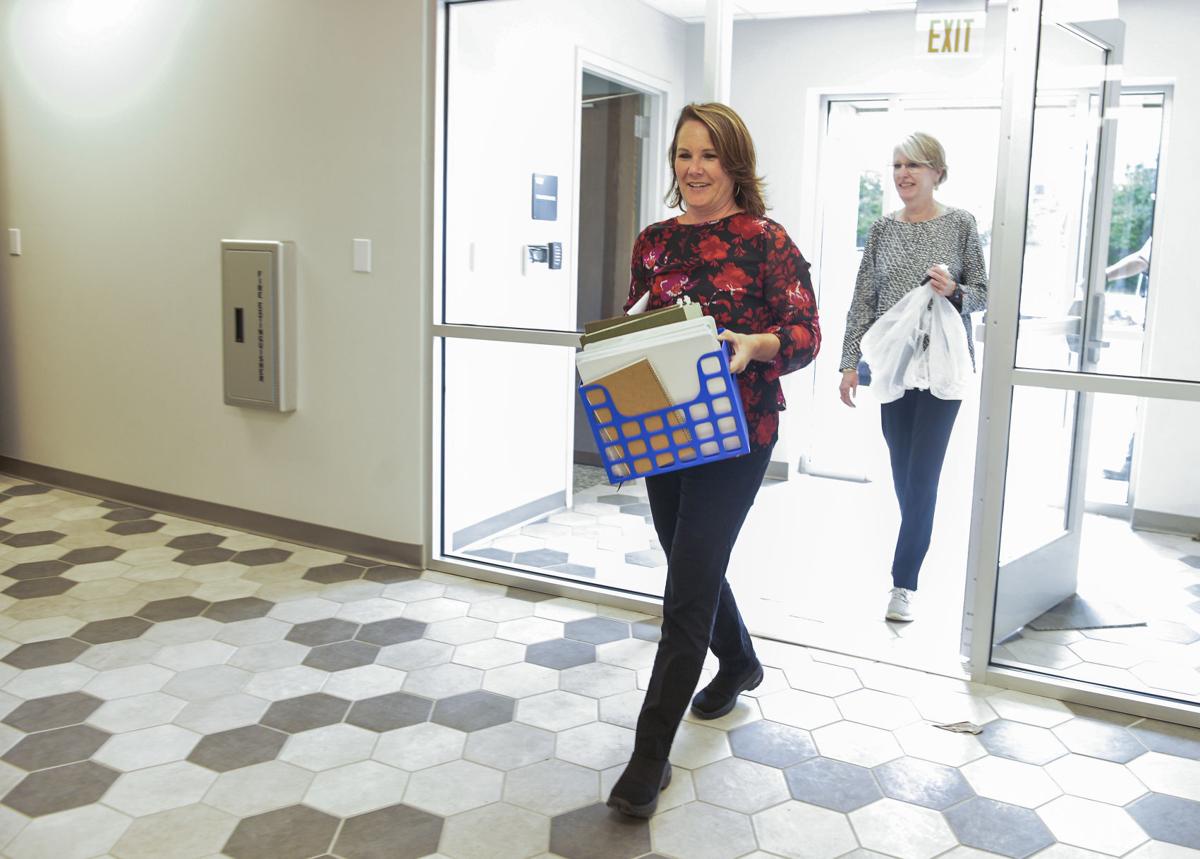 Kristin Mansell, who works in human resources at the central office of Decatur City Schools, moves into the new building on Monday. [JERONIMO NISA/DECATUR DAILY]

Kristin Mansell, who works in human resources at the central office of Decatur City Schools, moves into the new building on Monday. [JERONIMO NISA/DECATUR DAILY]

The first of 115 Decatur City Schools central office employees that have been scattered in work spaces across the city began moving Monday into a new headquarters that officials hope will make work flow more efficiently.

Anita Clarke, supervisor of curriculum and instruction, was one of the staff members that settled into her new office on Monday while tackling her workload at the same time.

“I have had to multi-task today,” Clarke said while in the middle of phone calls to several schools. “Work doesn’t stop for us.”

Four of the eight departments that will be in the new headquarters began moving Monday.

Clarke said she hoped that having all of the central office staff now working under one roof would boost productivity.

“It was difficult being spread across the city. I was having to work out of the old bank (on Johnston Street/Fourth Avenue) where the Encore building is,” Clarke said.

The old central office on Fourth Avenue Northeast and Lee Street had room for only five of the eight departments (accounting, human resources, instruction, safety and operations, and enrollment) as a result of it being a smaller building.

Clarke and other staff members who moved in Monday are still waiting on more of their items to arrive.

“We’re having to work with the bare essentials today,” Clarke said. “I’m still waiting on some boxes that will be delivered sometime this week.”

“The renovation process has been pretty smooth since we started,” said Matthew McCollister, an HVAC technician for Johnson Contractors Inc. “There was a rattling issue in the boardroom earlier today where a grille was loose, but we’ve since fixed that.”

Matthew and his brother Kyle helped install all of the HVAC units in the new building. The McCollisters said that over 100 rooms in the building now have HVAC service.

“The units are Daikin brand and are situated on the ceilings of these rooms,” said Matthew McCollister.

The school superintendent was among those relocating from the Encore building to the new central office on Monday.

“I moved the stuff that was in the Encore building (Monday),” Douglas said. “The 18-wheeler with the rest of my stuff will be there (today). I’ve got a superintendent’s conference in Florence (today) and Wednesday so I probably won’t be finished moving in until Thursday or Friday.”

Douglas agreed with Clarke that a big plus of the new building will be having all central office staff working under roof.

“With the old central office, we couldn’t get everybody under the same roof,” Douglas said. “Now, we feel we’ll be a whole lot more productive.”

Douglas and others who had offices in the school system's old headquarters vacated that facility earlier this year in preparation for the Alabama Community College System to begin using the building.

But some members of the central office staff never had space in the old headquarters building. The new one will be able to accommodate the entire staff and includes a board room where board of education meetings will be held. Meetings were held this school year in the auditoriums at Decatur High School and Austin High School.

"The board room at the old office was too small and not enough space to spread out when the pandemic started, so we had to move to those locations," Springer said.

Douglas said moving board meetings from the central office complicated the process.

“That just added another layer of having to take all of the board packets and information and set up those sites, and then those schools would have to un-set it up and get ready for kids the next day,” Douglas said. “You know, having a board room that is set up all the time 10 feet from my office and anybody else in central office is something that I think we took for granted.”

Douglas said the next board meeting will be Oct. 19.

“Depending on how well the move-in goes, we’re planning on having it at the (new) central office next week,” Douglas said.

The renovated structure is the former education building for Central Baptist Church, which left the property in 2007 and moved to 2801 U.S. 31 S.

Emmanuel Church International bought the property from Central Baptist but later vacated it, and it was purchased by developer Jeff Parker. The school system acquired the property from Parker in 2019 by paying $200,000 and exchanging two properties valued at $1.235 million — including the old central office building at Fourth and Lee. Under the agreement, the school system was able to lease its old headquarters while the new one was renovated.

The Community College System plans to transform the school system's old headquarters into a $4.1 million innovation center for industry and business training.