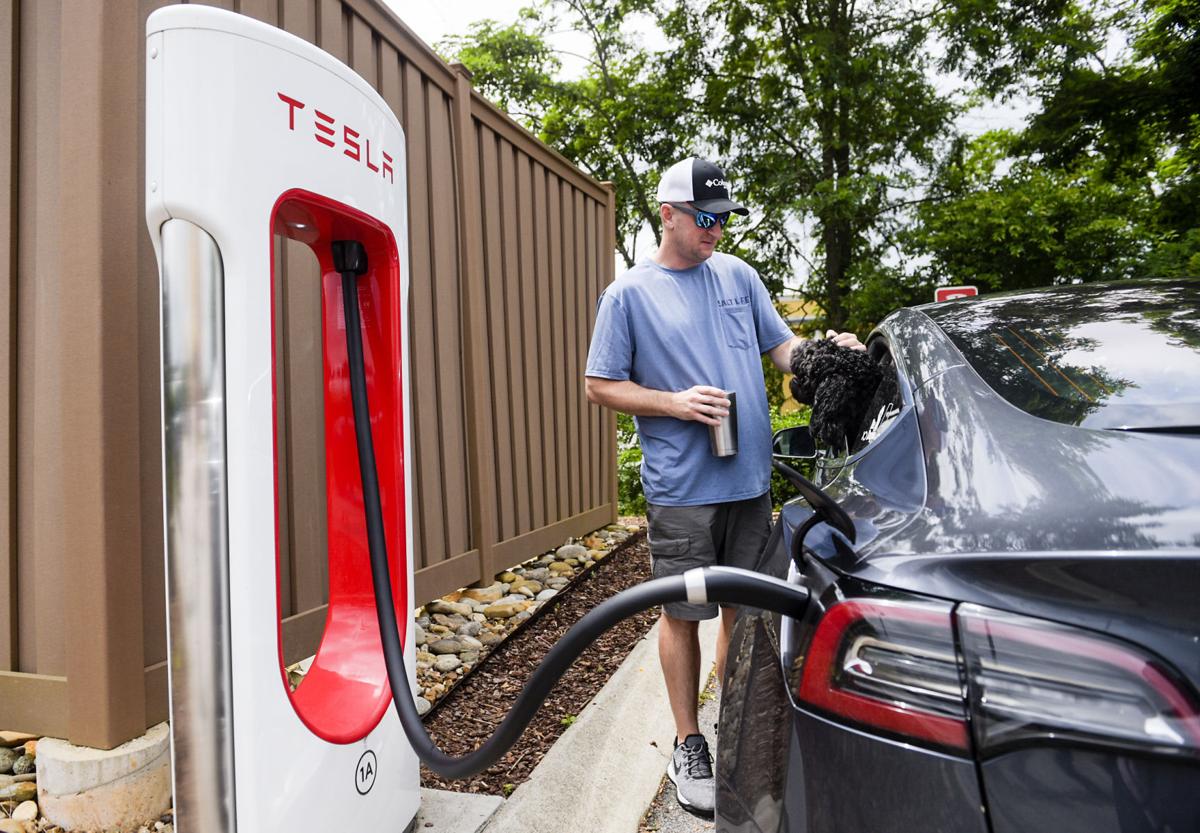 Sean Lusher pets his dog, Charlie, as he charges his electric car at one of the Tesla stations outside Fairfield Inn in Athens on Friday. He was driving from Nashville to Gadsden. The hotel is the only Tesla Supercharger station between Nashville and Birmingham. [JERONIMO NISA/DECATUR DAILY] 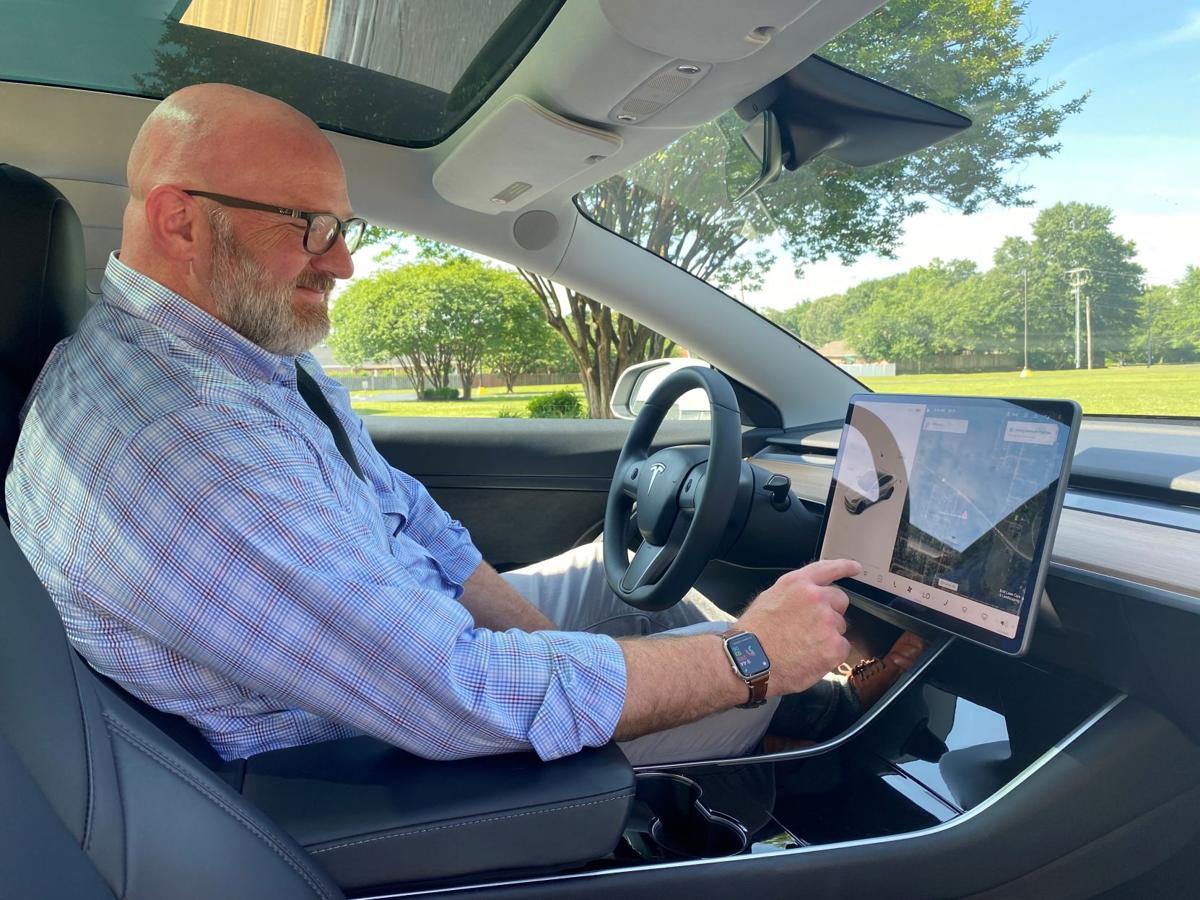 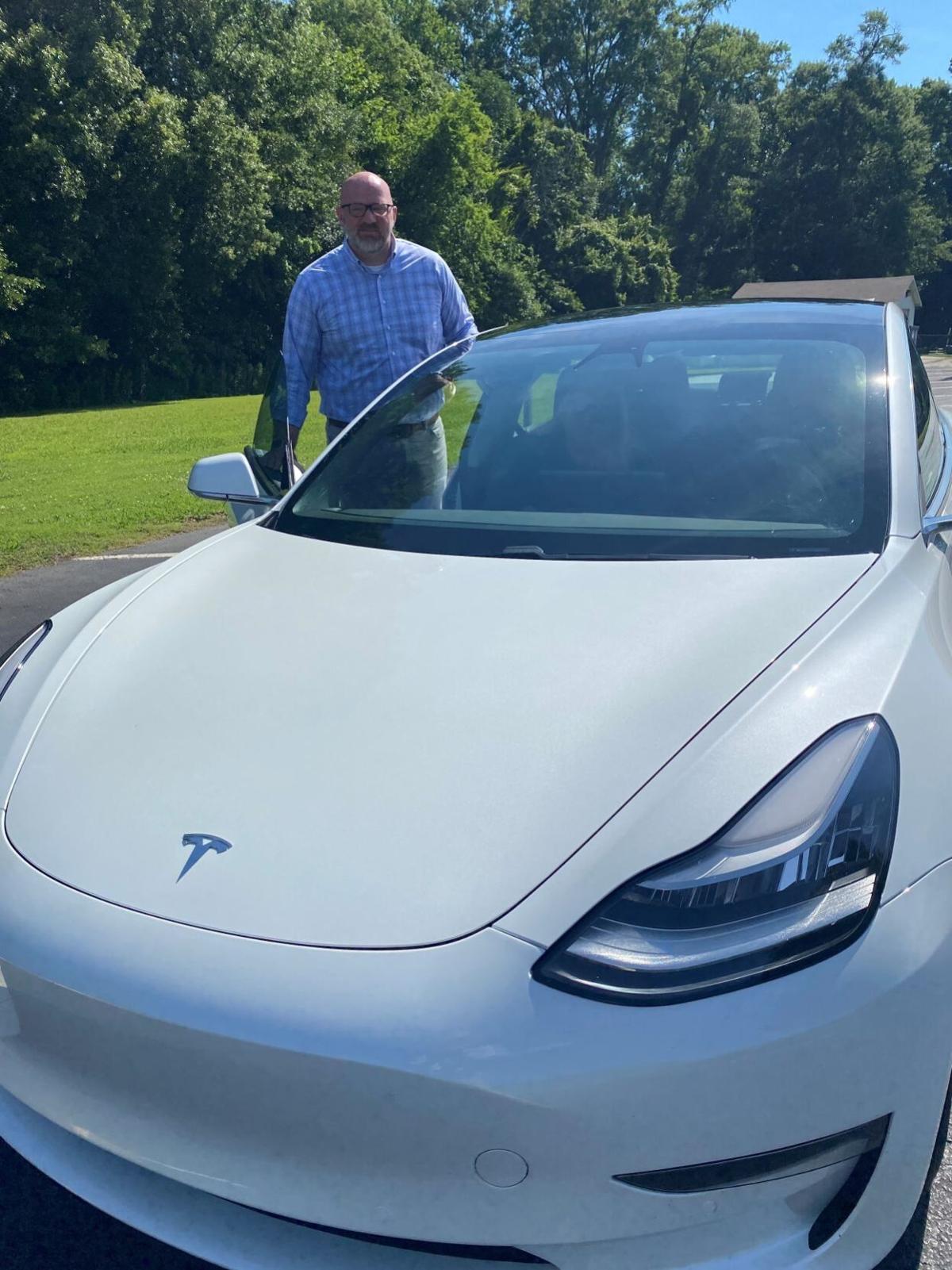 The Rev. Ted Amey says his 2020 Tesla Model 3 is getting about 240 miles per full charge. [MICHAEL WETZEL/DECATUR DAILY] 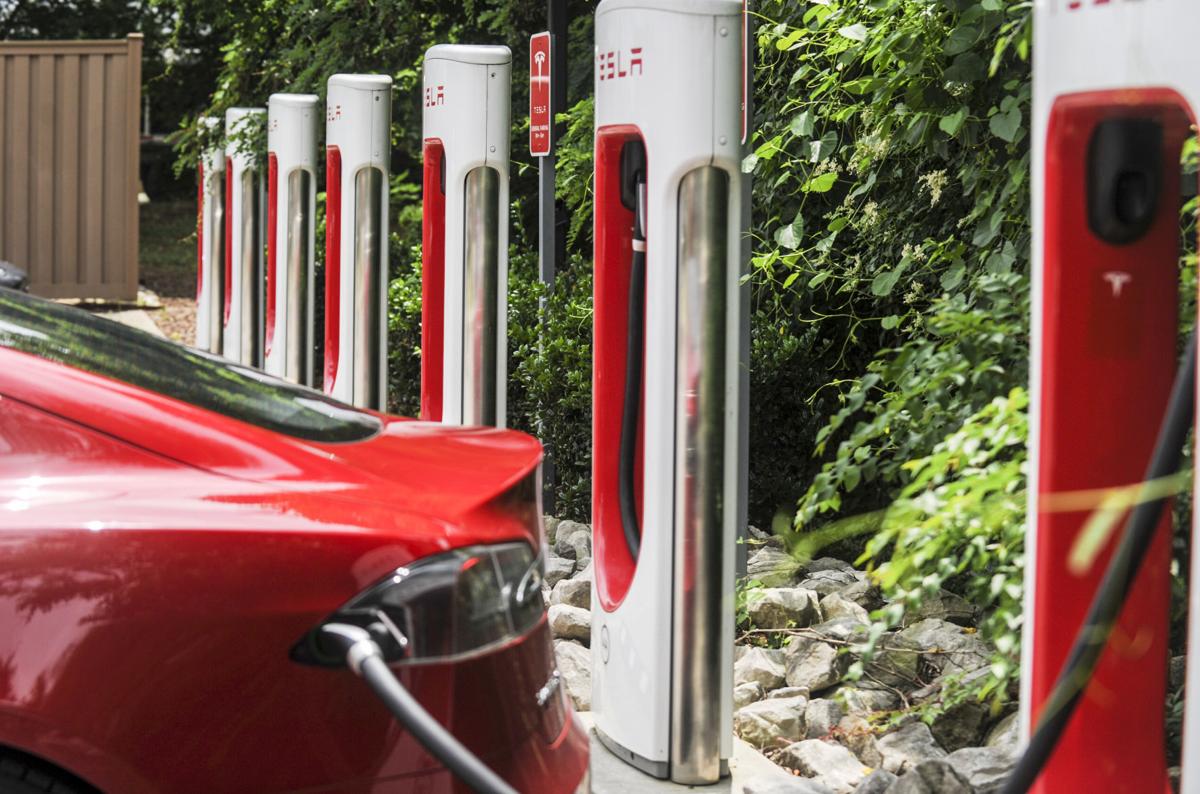 There are eight charging bays at the parking lot of Fairfield Inn in Athens. Some of the chargers work exclusively with Tesla vehicles, and others work with any other electric car. [JERONIMO NISA/DECATUR DAILY]

Sean Lusher pets his dog, Charlie, as he charges his electric car at one of the Tesla stations outside Fairfield Inn in Athens on Friday. He was driving from Nashville to Gadsden. The hotel is the only Tesla Supercharger station between Nashville and Birmingham. [JERONIMO NISA/DECATUR DAILY]

The Rev. Ted Amey says his 2020 Tesla Model 3 is getting about 240 miles per full charge. [MICHAEL WETZEL/DECATUR DAILY]

There are eight charging bays at the parking lot of Fairfield Inn in Athens. Some of the chargers work exclusively with Tesla vehicles, and others work with any other electric car. [JERONIMO NISA/DECATUR DAILY]

Two local residents say they have no regrets about purchasing an electric vehicle, but the need for more and faster charging stations remains a concern and continues to inhibit sales of EVs even as the state and Tennessee Valley Authority work on solutions.

“It is still a little early to find abundant charging stations," said the Rev. Ted Amey, owner of a 2020 Tesla Model 3. "A concern for a 100% electric car is the range anxiety and all the planning.”

There are at least three charging stations open to the public in Decatur and others in Athens and Hartselle, but only one is a Supercharger capable of providing a full charge in 45 minutes. On Thursday, Alabama Gov. Kay Ivey issued 18 grants totaling $4.1 million for at least 19 EV charging stations across north and central Alabama. The closest to Decatur will be at the Cullman Electric Cooperative Office on Eva Road in Cullman.

“We have begun the journey of transforming vehicles operated by fossil fuels into those powered by electricity, and it’s important that motorists be able to charge their vehicles when traveling along the interstate and other major highways in Alabama” Ivey said in a news release.

The governor’s office said the grants will be used to fund up to 80% of the cost of the charging stations. Funds for the projects came from the Volkswagen Settlement Plan and the Alabama Legislature.

Most electric vehicles range about 300 miles per charge, according to industry officials.

The hot spot for charging EVs in the area is the Fairfield Inn in Athens along Interstate 65 at Exit 351. It has eight bays at the lone Tesla Supercharger station between Nashville and Birmingham, according to plugshare.com, a website dedicated to locating EV charging spots.

According to the U.S. Department of Energy only about 5,000 of the 42,000 charging stations nationwide are fast-charging like the Athens site.

“It has been beneficial to our business,” said the hotel’s General Manager Daniel Hutton. “Its use didn’t slow down during COVID last year, and now that people are traveling more we have a steady flow of people stopping for a charge from the north, Indianapolis, Chicago, mainly going to and from the Gulf.”

Using the charging station is free, he said, and motorists are welcome to use the hotel’s restrooms or sit in the lobby and drink coffee and watch television while vehicles are charging. He estimated at least 20 EV motorists stop to charge daily and more on the weekends. “We have people charging 24 hours a day,” he added. “Some are locals stopping by for a charge.”

The Supercharger, also known as a Level 3 charger, is the fastest in the industry.

Hutton, who drives a gas-powered vehicle, said it is tempting to purchase an electric vehicle. “I believe Tesla and other electric vehicles will be a standard in the next decade,” he said.

Amey said there is still a concern on longer trips of locating enough charging stations along the route.

His base model gets about 240 miles on a full charge, he said. “Driving longer distances takes planning and research. I love both,” said Amey, senior pastor at The Church at Stone River on Danville Road Southwest.

He said a trip to Gulf Shores last month had he and his wife Jill stopping in Birmingham for 20 minutes for a quick charge, and they stopped at a restaurant along Interstate 65 in Greenville, while their car charged at a nearby hotel.

“It was a Supercharger and was back on full charge before we had finished eating,” he said. At the beach, they charged the vehicle from a standard 110-volt outlet. It required an overnight charge, Amey said.

At home, Amey charges his Tesla on a 220-volt outlet. A full charge takes about four hours, he said.

Prior to owning his EV, Amey said he was spending about $450 a month in fuel costs for his midsize sport utility vehicle. “Our electric bill is up about $60 a month since we bought this Tesla,” he said. “That’s quite a bit of savings and great for the environment, too.” He purchased the vehicle in December 2019 and has put 39,000 miles on it.

Sean Lusher of Nashville, who charged his Tesla in Athens on Friday, said more Superchargers are needed. He said while traveling in south Alabama, he stopped at the Supercharger in Greenville.

"I had to wait an hour and a half for an open bay there" on one occasion, he said.

Tore Haavik, a financial adviser for Edward Jones in Decatur, has owned a 2016 Tesla S Model for about six weeks. He’s happy with it and the 200 to 250 miles it gets from a full charge. He too is wanting to see more charging stations in place.

“I’m enjoying the convenience of driving it. It’s super simple and very powerful with good torque,” said Haavik, a native of Norway. “I’ve seen some Target stores setting up chargers, but not here yet. It’s a trend that Decatur is lagging behind. You need to facilitate it. The opportunities for the community to participate and set up charging stations are there. In my opinion, the market is going to be huge in three to five years. (The EVs) will be here faster than people think.”

Haavik considers himself an environmentalist and purchasing an EV gives him a more active role in the in the clean energy movement.

The BBC Science Focus website says that even with electricity generated from a coal-fired plant "electric cars still have lower CO2 emissions overall. This is because large power stations turn fuel into energy more efficiently than multiple, small engines, and it’s easier to clean up the exhaust in their towering chimney stacks. And unlike (gasoline) cars, electric cars will get cleaner if a wind farm or other renewable energy source opens up nearby."

TVA is working with community partners to secure up to $40 million to support EV adoption through its EV Initiative.

“TVA is focused on partnering with local power companies across north Alabama to build out the electric vehicle charging network, with a goal of fast chargers every 50 miles down major corridors,” said Malinda Hunter, a TVA spokesperson. “We have several projects in early planning stages now, and we hope to share more about those soon.”

The goal is to complete the project by the end of 2025, said TVA spokesperson Scott Fiedler. TVA said it wants to place the charging sites near shopping and dining options so drivers can have “safe and efficient recharging experiences.”

Decatur Utilities hasn’t established a public charging station, but discussions are on the table, according to spokesperson Joe Holmes.

“DU is currently evaluating the possibility of investing in an EV charging station in the downtown area,” he said. “We do not have a firm timeframe for that yet.”

Joe Wheeler Electric Membership Corp. spokesperson Michael Cornelison said the rural utility provider in Morgan and Lawrence counties has no plans for charging stations under consideration at the present time.

“We’re aware of the growing popularity of electric cars,” he said. “We’re not seeing a lot of folks in our area who have electric vehicles.”

Holiday Inn Express in Southwest Decatur and Home 2 Hotel at Ingalls Harbor have Level 2 universal chargers, which, according to EV data, require about four hours to fully charge a vehicle.

Along Alabama 20 in Decatur, Jay Landings RV resort and marina owner Elizabeth Jenkins has two chargers, Tesla and universal. But she admits she hasn’t been pleased all of the time with the station. She said Tesla contacted her approximately five years ago about installing two charging stations at her location.

“They paid for the equipment and the installation. … But I might have one car a month, maybe, come here to charge up,” she said. “It’s a minimum of $5 to charge. (The motorists) expect it to be free. But it adds to my power bill.

“In hindsight, I would not have put them in,” she said. “I have limited space for parking, and the area the stations take up could be better used.”

In Hartselle, Mayor Randy Garrison said the City Council voted to install two Level 2 chargers in downtown last summer. He said Hartselle Utilities and TVA paid about $10,000 for the installation. There is no charge for motorists to use the station.

“We have it downtown so people needing a charge can park their car for up to four hours and shop and eat downtown,” he said. “This charging station has increased the foot traffic for our shops. The chargers are not necessarily paying for themselves right now, but it’s hard to measure the increased business for our shops.”

While the stations aren’t seeing constant use, Garrison said more electric vehicles will be arriving as technology advances. “We want to stay a progressive place to live, and it’s only natural we have a place where electric vehicles can charge. We’re trying to look to the future.”

“We don’t have any Mustang Mach-Es on the lot presently, but we have several pre-orders for them,” he said about Ford’s popular electric vehicle. “It’s still early.”

He said patrons purchasing electric vehicles “should have them by six months, if not sooner.”

“They were less than 2% of all sales in 2020, which had sales of 14.5 million. EV sales are increasing as more models come on the market. No one really knows when EVs will reach an inflection point that they will be commonplace. Five, 10 years? Or more?”

She said, “the obstacles to EV adoption remain their higher price, range and lack of an EV charging infrastructure, which the Biden administration’s infrastructure proposal addresses.”

According to The Associated Press, the Biden administration is developing incentives to encourage companies and governments to build 500,000 charging stations nationwide by 2030.

“The initial cost was less to purchase than our former SUV,” he said. “Plus we received a tax incentive.”

He said his EV requires no tuneup or oil changes, “only tire rotation and adding washer fluid.”

The Ford Mustang Mach E sells for $42,895 with a range of about 280 miles, according to the Ford website.