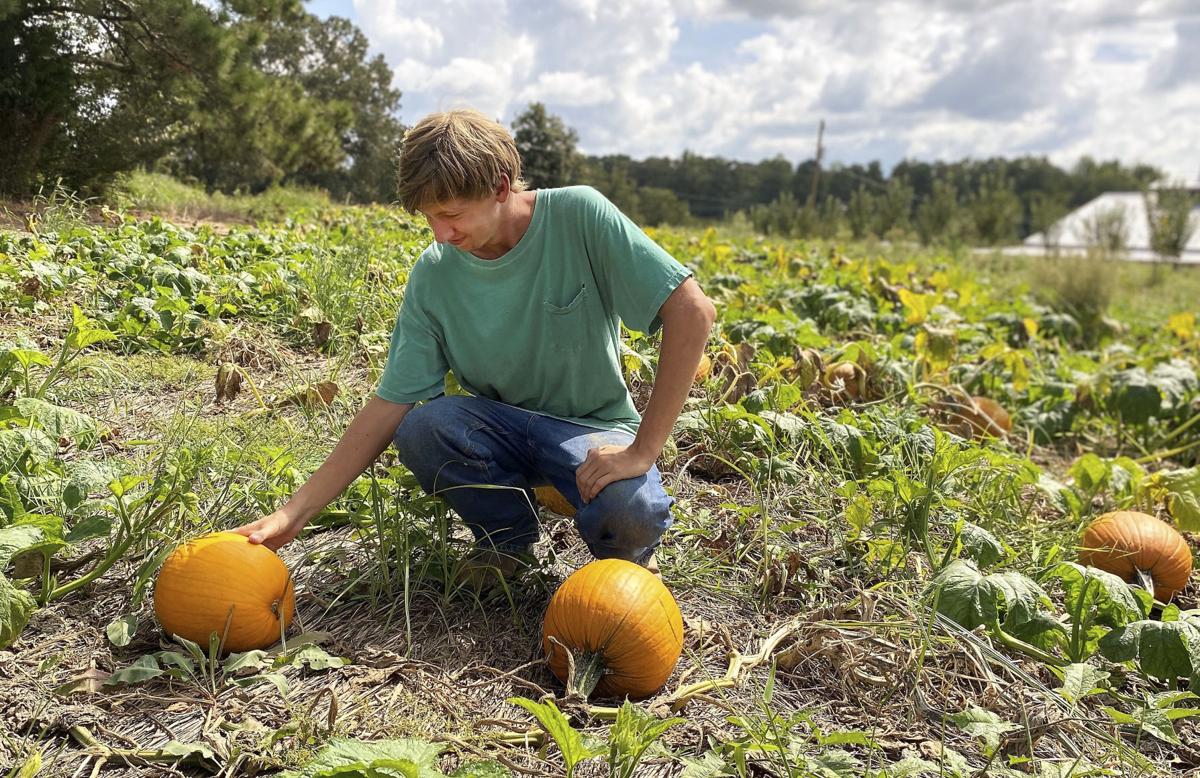 Zac Watts, a farm hand at Reeves Farm in Hartselle, inspects pumpkins Monday. Farm owner Mike Reeves said he was uncertain about the demand for pumpkins in the middle of a pandemic, "but they’re selling." [MICHAEL WETZEL/DECATUR DAILY] 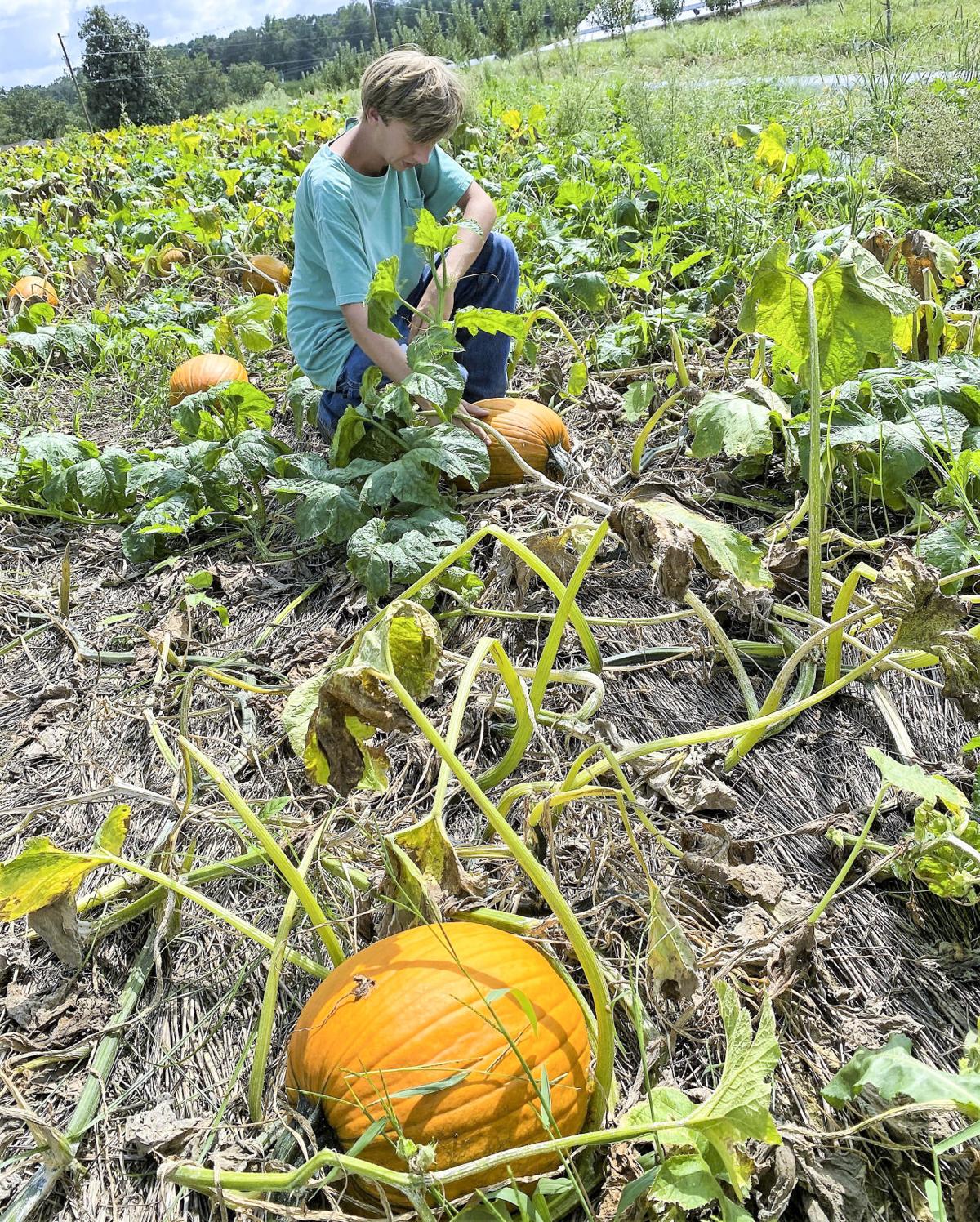 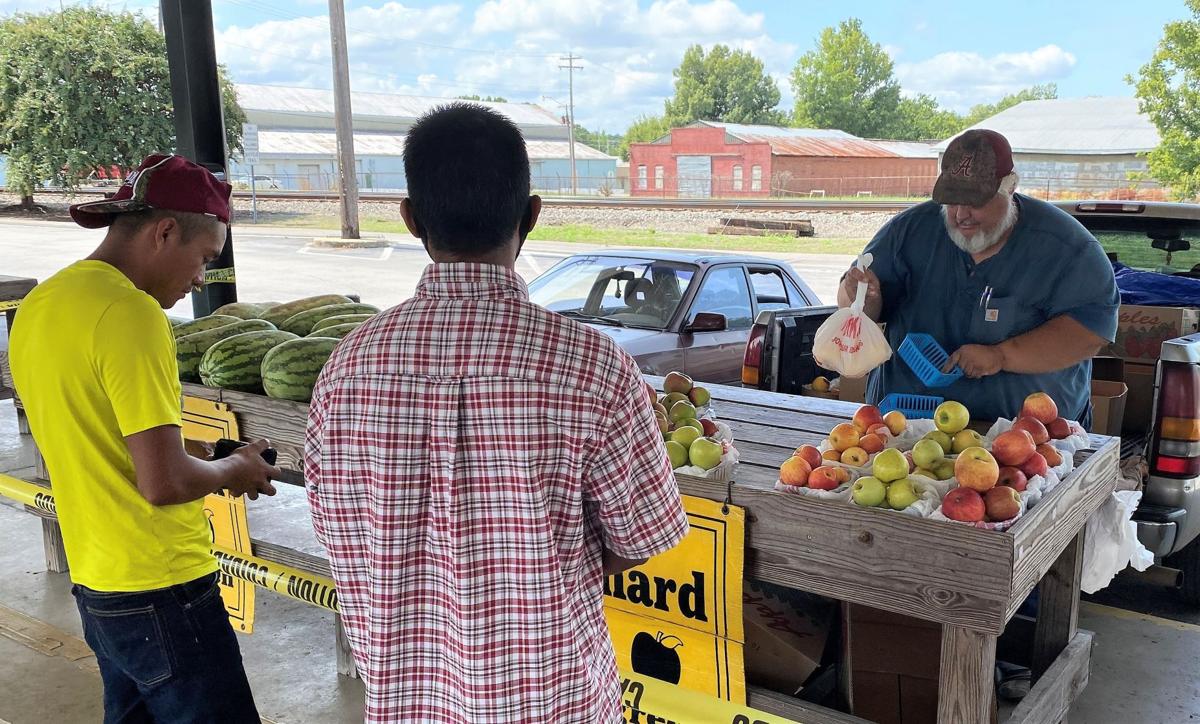 While selling produce at the Morgan County-Decatur Farmers Market on Monday, Lawrence County produce farmer Jackie Letson, right, said the past growing season was a strong one for him. [MICHAEL WETZEL/DECATUR DAILY] 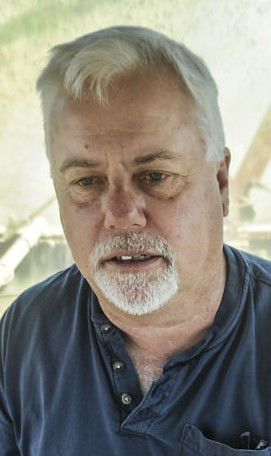 Zac Watts, a farm hand at Reeves Farm in Hartselle, inspects pumpkins Monday. Farm owner Mike Reeves said he was uncertain about the demand for pumpkins in the middle of a pandemic, "but they’re selling." [MICHAEL WETZEL/DECATUR DAILY]

While selling produce at the Morgan County-Decatur Farmers Market on Monday, Lawrence County produce farmer Jackie Letson, right, said the past growing season was a strong one for him. [MICHAEL WETZEL/DECATUR DAILY]

Good conditions for crops and strong demand for food because of COVID-19 worries gave area farmers satisfying results in the growing season nearing its end.

Danville farmer Mark Byrd said “rain fell at a good time” on his farm where he was growing wheat, soybeans and corn this summer.

“Location is important. I know there were some locations in Morgan and in Limestone that had drier weather,” he said. “I’m putting an A (grade) on everything this summer.”

He said demand because of the uncertainty of how the pandemic was going to affect the supply chain was a driving factor in sales.

“Demand has been a tad higher because market prices were up 10% to 15% across the board,” he said. "When demand is up, prices are up."

He said a major storm, known as a derecho, that hit Iowa on Aug. 10 caused major damage to millions of acres of farmland and “demolished” that state's corn crop, pushing up prices elsewhere.

“Also, China has been loading up on U.S. products coming off the (President Donald) Trump tariff deal where they had promised to buy our goods,” Byrd said.

Byrd, who also raises chickens, said the processing plants, like Wayne Farms, Pilgrim’s Pride and Mar-Jac Poultry, have been “running wide open” meeting the high demand in part caused by the pandemic.

Marilyn Champion, of Champion Farms in Falkville and a regular vendor at the Morgan County-Decatur Farmers Market, said when businesses were shut down in March because of the pandemic, it became a guessing game of what to grow.

Calling tomatoes the family's king cash crop year in and year out, she said her husband reduced green bean production about 20% and planted no pumpkins where they usually grow 3 to 5 acres.

“Green bean sales were better this year than they have ever been before,” she said. “We would have grown more green beans and peas had we known."

She said foot traffic past her booth at the farmers market has been down about 20% and she attributes that to customers limiting shopping as a COVID-19 precaution. The market has done a good job putting tape around the vendors' tables to keep consumers a safe distance away, she added.

“Beginning of the year, we had more customers coming to the farm. We had a drive-thru set up where people wouldn’t have to get out of their cars and felt safe,” she said.

“We’re glad the government didn’t shut down the farmers market because of COVID. People were scared food would run out, and they’ve been putting up food. We didn’t expect that. Everything at the farm has sold, and business has slowed somewhat (at the farmers market).”

Farmers market consumers Elaine Atkins and Becky Lawrimore said the pandemic changed their shopping habits but they are pleased with the produce they are finding at the market.

Calling herself a semi-regular customer at the market, Atkins said she wasn’t sure what to expect there this year because of COVID-19.

“But I’ve been able to find what I’ve been looking for,” she said. “The quality has been good, and the prices about the same.”

Lawrimore said she has been cautious about getting outside in crowds of any size.

“I don’t bring my granddaughter to the farmers market on Saturdays because of the larger crowds,” she said. “But I’ve been able to find the quantity and quality I want when I am here during the week.”

Jackie Letson, of the Mount Moriah community in Lawrence County, said a dry August hurt some of his crops, but it was a “solid year” to farm.

“It was a great year for peaches, and we’ve got some apples on the way. We had to pump some water in August when we lost some peaches when it got dry.”

He said his 3,000 tomato plants produced a bountiful crop he sold at the farmers market.

Mike Reeves, owner of Reeves Farm and a former county extension coordinator, said, “A late frost hurt us on a few varieties of peaches. We had to irrigate a little, but we had some very timely rainfall.”

He said cantaloupe, watermelons, okra and peas were strong in the field this summer, too.

“People were buying early this year,” he said. “I guess with COVID closing things in the spring, people were looking for a reason to get out of the house.”

Reeves called business at his market east of Hartselle on Alabama 36 “strong and steady.”

He said he also sold some produce at Huntsville’s Bailey Cove market on Saturdays.

“When the grocery store shelves were empty in April and May, we were selling out of everything,” he said.

He said he was uncertain if people would be seeking pumpkins this year because they are staying closer to home and having fewer visitors.

“But they’re selling,” he said. “Mostly they’re buying pumpkins for fall decorations in their homes.”

Mitchell Henry, Moulton cattle producer, said he is a breathing a sigh of relief because of the good weather for cattle, hay and water.

“Weatherwise and haywise, it was a very good year,” he said. “Four years ago, that drought really hurt us, and this time last year it was very dry. At times this year we’ve had too much rain, but I’m not complaining. It was a good problem to have.”

Is the pandemic changing the way you are celebrating Halloween this year?