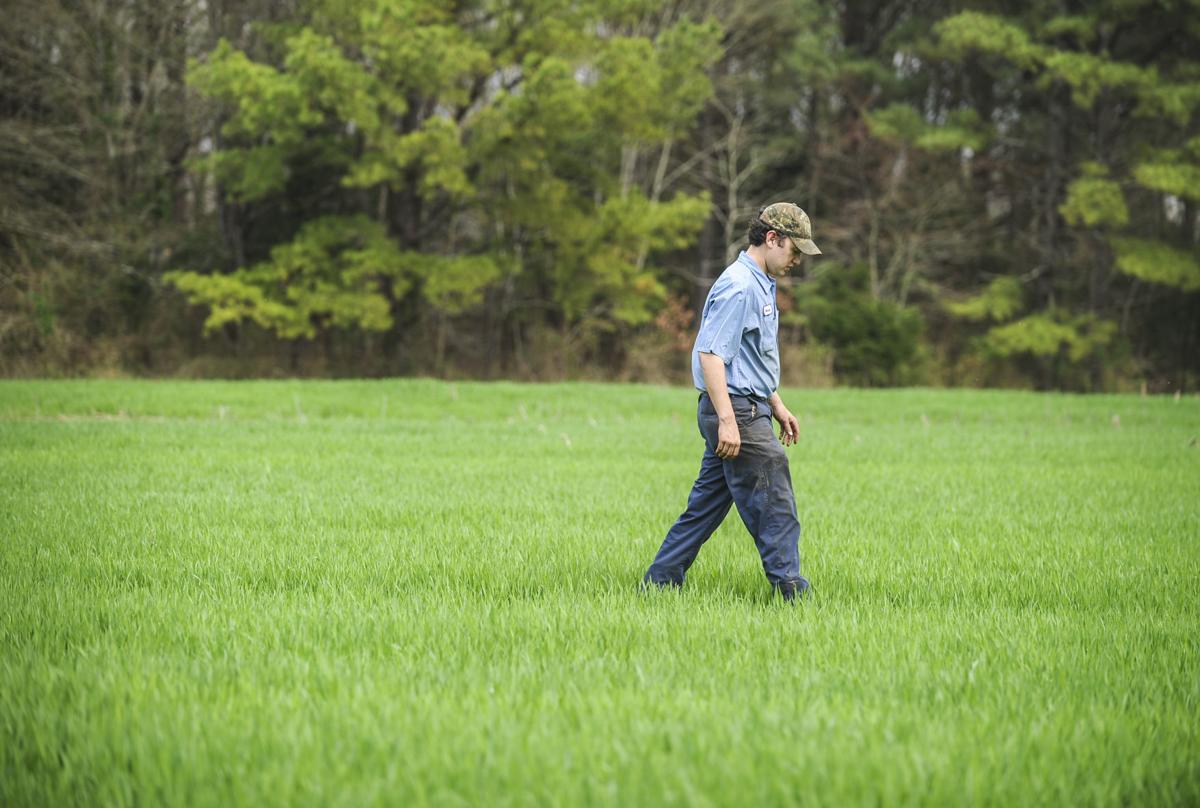 Brady Peek walks Wednesday on one of Peek Family Farms' wheat fields in western Limestone County. He's hoping for warm weather and sunshine for the next couple of months to help his crop have a good yield. [JERONIMO NISA/DECATUR DAILY] 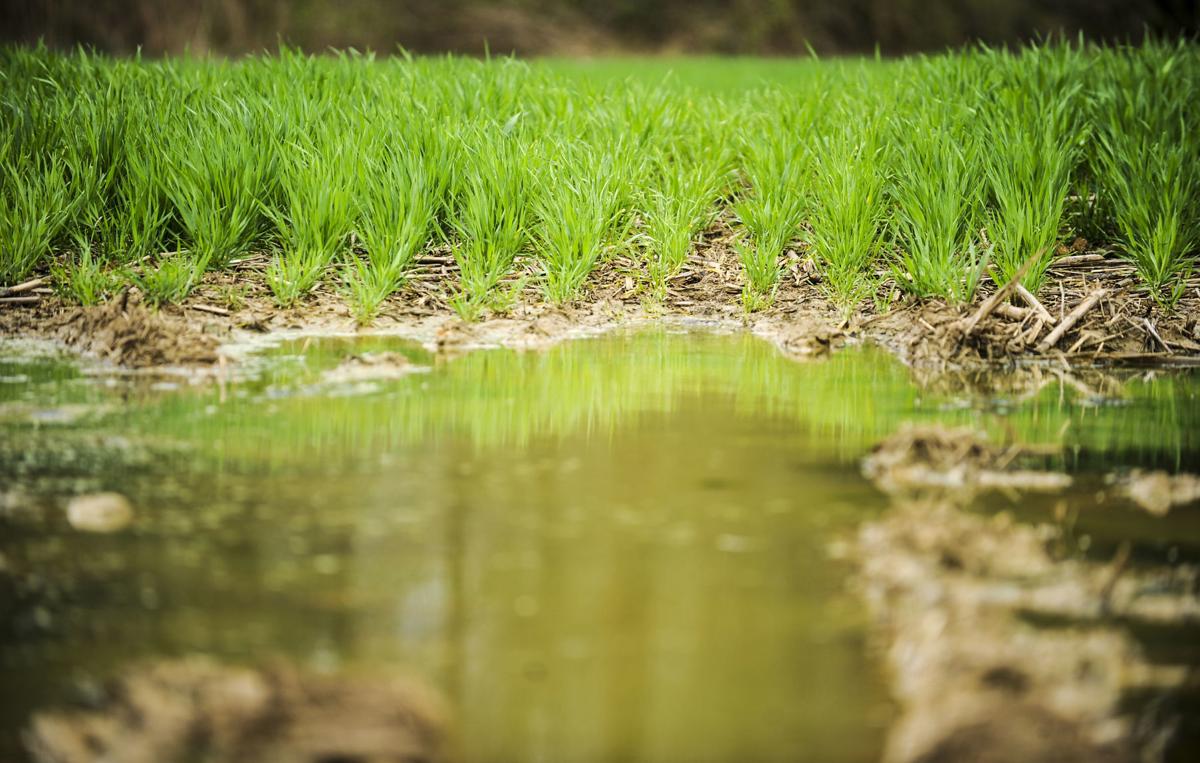 Flooded sections like this one in a Peek Family Farms' wheat field are a common sight after a wet winter. Wheat in low-lying areas prone to flooding will have a reduced yield this year. [JERONIMO NISA/DECATUR DAILY]

Brady Peek walks Wednesday on one of Peek Family Farms' wheat fields in western Limestone County. He's hoping for warm weather and sunshine for the next couple of months to help his crop have a good yield. [JERONIMO NISA/DECATUR DAILY]

Flooded sections like this one in a Peek Family Farms' wheat field are a common sight after a wet winter. Wheat in low-lying areas prone to flooding will have a reduced yield this year. [JERONIMO NISA/DECATUR DAILY]

Area farmers are counting on drier conditions ahead, for the winter wheat that’s still in the ground and for the crops they’re waiting to plant, after heavy rains the last few months.

Sam Spruell, of the family-owned Spruell Farms, said rainy weather has delayed nitrogen applications on some 1,000 acres of winter wheat crops in fields he farms across Lauderdale, Lawrence and Franklin counties. And, it has delayed the planting of about 1,500 acres of corn on land in Lawrence, Marion and Lamar counties.

“Some of the wheat crop was drowned out where water ponded in the low areas of the fields,” said Spruell who, with his wife, son and daughter, runs the Spruell farm operation, based in Mount Hope in Lawrence County. “Probably 5% is lost for good.”

The family typically plants corn in mid-March, but those plans have been pushed back.

“We haven’t planted any corn, and we’re going to get started later than we’d like,” Spruell said. “That’s concerning. We need five or six days of dry weather before we can plant corn. I’m optimistic that by the end of (this week), it’ll be dry enough to get in the fields and get things done.”

The National Weather Service office showed rainfall in the Huntsville area at 6.61 inches in October, 3.98 inches in November, 5.43 inches in December, 7.13 inches in January, 9.11 in inches in February and 2.85 inches in March, as of Friday. The rainfall in three months — October, January and February — showed upward departures from normal measurements of 3.16, 2.50 and 4.43 inches, respectively.

“With the rain being continuous, it shuts off the window for farmers to spray herbicide and fertilizer,” said Andrew Page, a regional agent with the Alabama Cooperative Extension System for northwest Alabama, including Lawrence and Limestone counties. “They’re making it work so far with the few days they have had.”

Farmers who have winter wheat planted in low-lying areas that are prone to flooding will suffer some yield losses, said Page, who focuses on agronomic crops, which are those requiring large acreage.

One plus for farmers is the wheat crop is usually resilient.

Brady Peek, of Peek Family Farms in Limestone County, said “we often say wheat is like a cat."

“It has nine lives, and it can be pretty tough,” he said. “But it has been an uphill battle since the wheat was put in the ground, largely with the rain we’ve had.”

Peek and his employees planted about 400 acres in winter wheat in November and ideally harvest will be around the first of June. He’s been concerned about the prospect of having a mediocre wheat crop this year but, by the end of last week, he was a little more comfortable about the outlook for improving weather.

“It’s important to have good growing conditions — no real cold weather and sunshine — for the next couple of months for an optimum yield,” he said.

The rainfall has also had an impact on a family-owned farm in Danville, limiting its owners from applying fungicide and fertilizer to its 500 acres of winter wheat over the winter months.

“We had a window (last week), and we were able to get in and catch up,” said Mark Byrd, of Valley Boys Inc., a farmer for the last 35 years whose operation includes his wife and two sons.

Byrd said that “the problem with this much rain is it’ll drown crops out” in the lower spots of wheat fields.

“Where it has not drowned out the wheat, it looks good,” he said. “I expect to have an exceptional yield, depending on the conditions in April and May. We do need rain, but not every day.”

Both Byrd and Peek are also waiting for drier conditions to get corn planted.

“Normally, corn planting would be wide open right now,” said Byrd, who still expects to plant 500 acres of corn. “We’ll plant corn as soon as it’s dry enough to get in the fields. It probably will be the first of April before we can start planting corn, then we’ll plant soybeans immediately after that.”

The rainy weather has also hindered Peek from preparing the soil for a corn crop, but he still expects to plant 400 to 500 acres.

“When the weather finally breaks, we will be pretty busy,” Peek said.

Would you seek out a COVID-19 test, despite the possibility of quarantine, if you had minor symptoms?