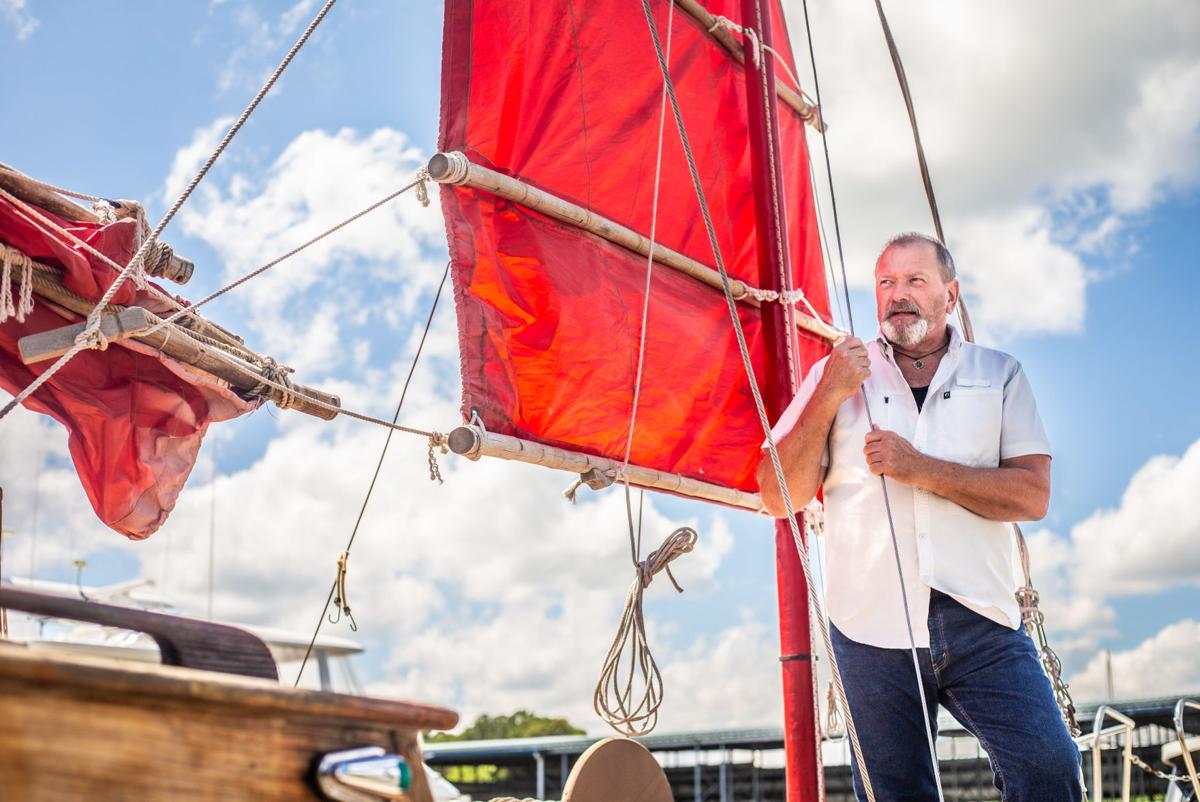 Rich Ender overlooks boats from his 1967 Chinese junk, a type of sailboat, parked at one of the boat slips at Florence Harbor Marina. [DAN BUSEY/FOR THE DECATUR DAILY] 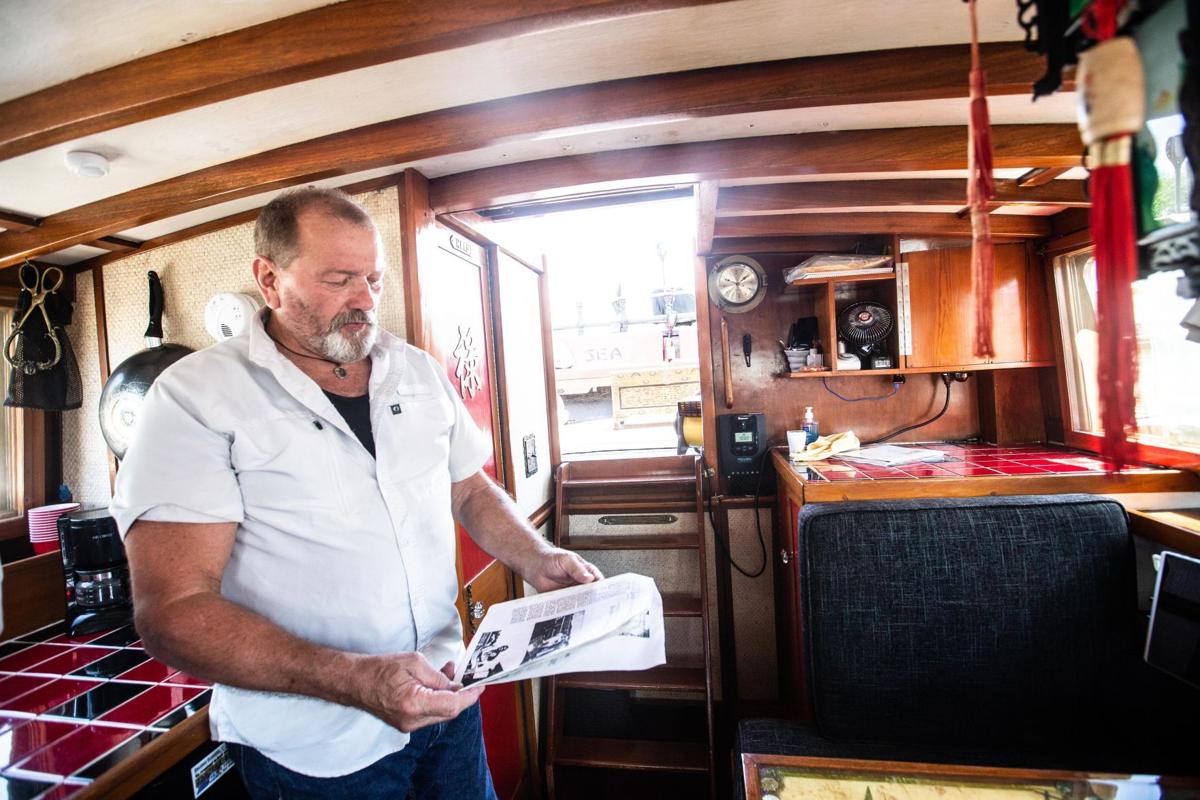 Rich Ender reads over a New York Times article that was written about the origin of his 1967 Chinese junk. [DAN BUSEY/FOR THE DECATUR DAILY] 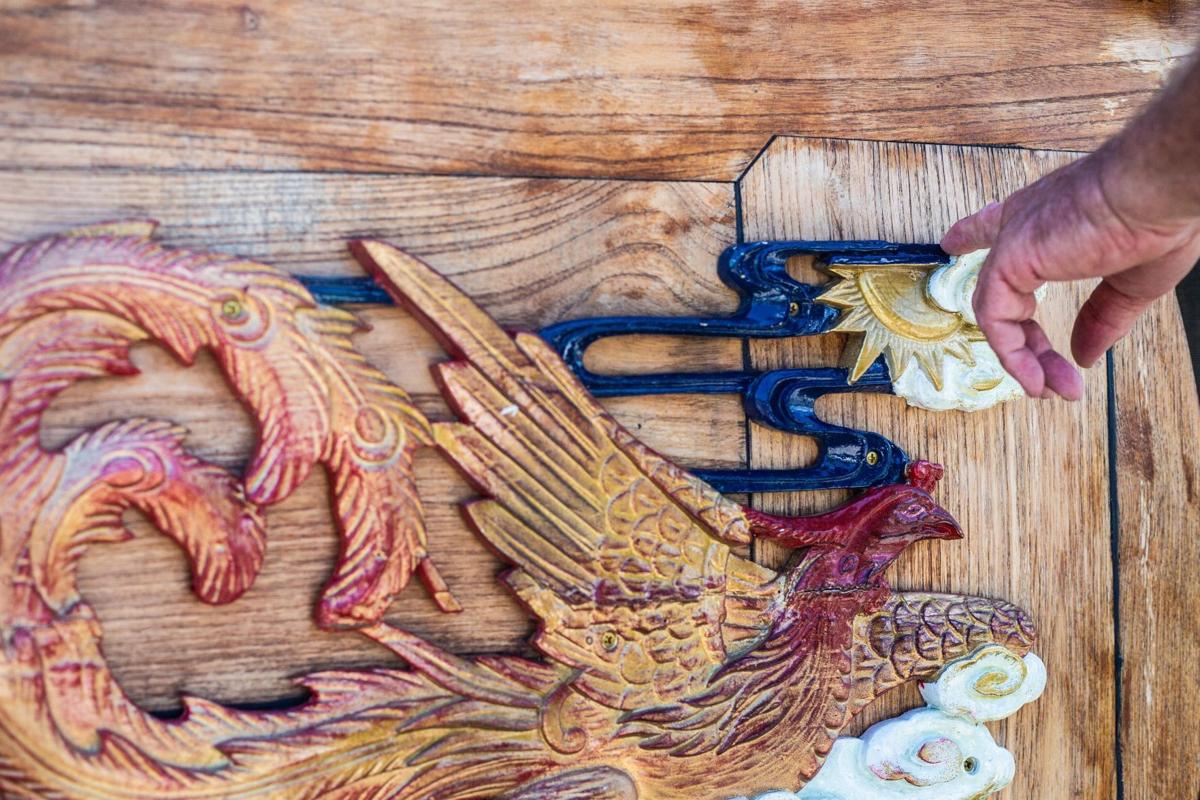 Rich Ender points to original decorations on the side of his ship, Sea Dragon. [DAN BUSEY/FOR THE DECATUR DAILY]

Rich Ender overlooks boats from his 1967 Chinese junk, a type of sailboat, parked at one of the boat slips at Florence Harbor Marina. [DAN BUSEY/FOR THE DECATUR DAILY]

Rich Ender reads over a New York Times article that was written about the origin of his 1967 Chinese junk. [DAN BUSEY/FOR THE DECATUR DAILY]

Rich Ender points to original decorations on the side of his ship, Sea Dragon. [DAN BUSEY/FOR THE DECATUR DAILY]

FLORENCE — Among the vessels docked at Florence Harbor Marina, one particularly seems to be catching attention these days.

The vessel looks like a pirate ship, complete with the skull and bones of the Jolly Roger flying atop it.

But captain and sole occupant Rich Ender is far from a frightening pirate. Instead, he's a friendly and jovial retiree from Vinton, Iowa, who has spent some six months docked here.

Ender said the sailboat, called a Chinese junk, was made in Hong Kong in 1967.

Junks were considered good work vessels in China, he said. Their hardiness also attracted another group.

Apparently, so do many passersby. Ender said the ship gains a great deal of attention sitting in the harbor with people stopping by frequently to ask about it.

Ender is happy to talk with them about it, but makes sure to point out the celebrity is the ship, not him.

The ship's resemblance to a pirate ship fascinates adults and children alike. Ender particularly gets a kick out of the reactions from young children. He even has a treasure chest that contains chocolate coins. Ender also has a fun story for them.

"There's a hole in the main sail that birds ate through," Ender said. "So when kids come here I tell them it was made in China and when it first sailed, pirates shot a hole in it."

He laughed when saying the made-up tale often receives the same incredulous reaction from the parents as it does from the children.

Sometimes, children naturally think he is a pirate.

"One asked, 'Hey, Mr. Pirate, did you have a job before you got to be a pirate?'" Ender said. "I feel like I should cut my leg off and poke my eye out."

The ship has numerous cool features, including a wooden floor in the sleeping quarters with planks that only can be arranged one way to fit into place.

He said the ship had been shrink-wrapped and stored for about six years, so he knew he would have his work set out for him.

A former U.S. Marine sergeant, former lineman and retired owner of a computer repair business that he gave to his grown children, Ender is a jack-of-all-trades who loves a challenge. So when he saw the junk ship, his eyes lit up as he envisioned the challenge ahead of him.

"I've been boating since the early 2000s and I like fixing things up," he said. "I found this online and it had been abandoned."

He also had to empty more than 50 gallon-buckets of moldy black water from the ship.

"I put an ozone generator on it for four days because it was black and nasty," Ender said.

It required a great deal of work, and Ender continues projects to spruce it up. He said he put about 300 hours of work into the ship over three months to get it running.

Some people may be wary of a wooden boat, but this one has a solid 2-inch-thick teakwood hull.

The 22-ton ship with a 130 horsepower Detroit diesel motor has an interesting history, having been purchased by a woman named Dorothy Ennis. Robert Ripley, the namesake who created "Ripley's Believe it or Not," was a friend of Ennis' family and also owned a junk, Ender explained.

Ripley often took the family out on the ship when Ennis was a child and she fell in love with it and wanted to purchase one. When she became an adult she did just that — buying the very same Sea Dragon that Ender now holds at the harbor.

The ship has been to various places, including Mobile Harbor, and eventually ended up at the Miss-Croix Yacht Harbor in Prescott, Wisconsin. A newly retired Ender was shopping for a ship and found it.

The vessel travels at a top speed of some 6 or 7 mph but the journey is enjoyable.

"It's nice on the water and everyone's waving," Ender said. "It's fun."

He has had it at Florence Harbor Marina since December. Ender had been to Florence in the past and knew it would be a good place to dock.

"This marina, this place is totally awesome," he said. "I really like Florence. They've got a lot to do here."

Although he is alone on the ship, Ender said between keeping in touch with his children and talking with curious observers, it is far from a lonesome life.

"It's a very stout boat and it's got stuff to do on it," he said. "It's really comfy. I enjoy it. It's a looker. People have their tiny houses, so I say I've got my tiny pirate ship."