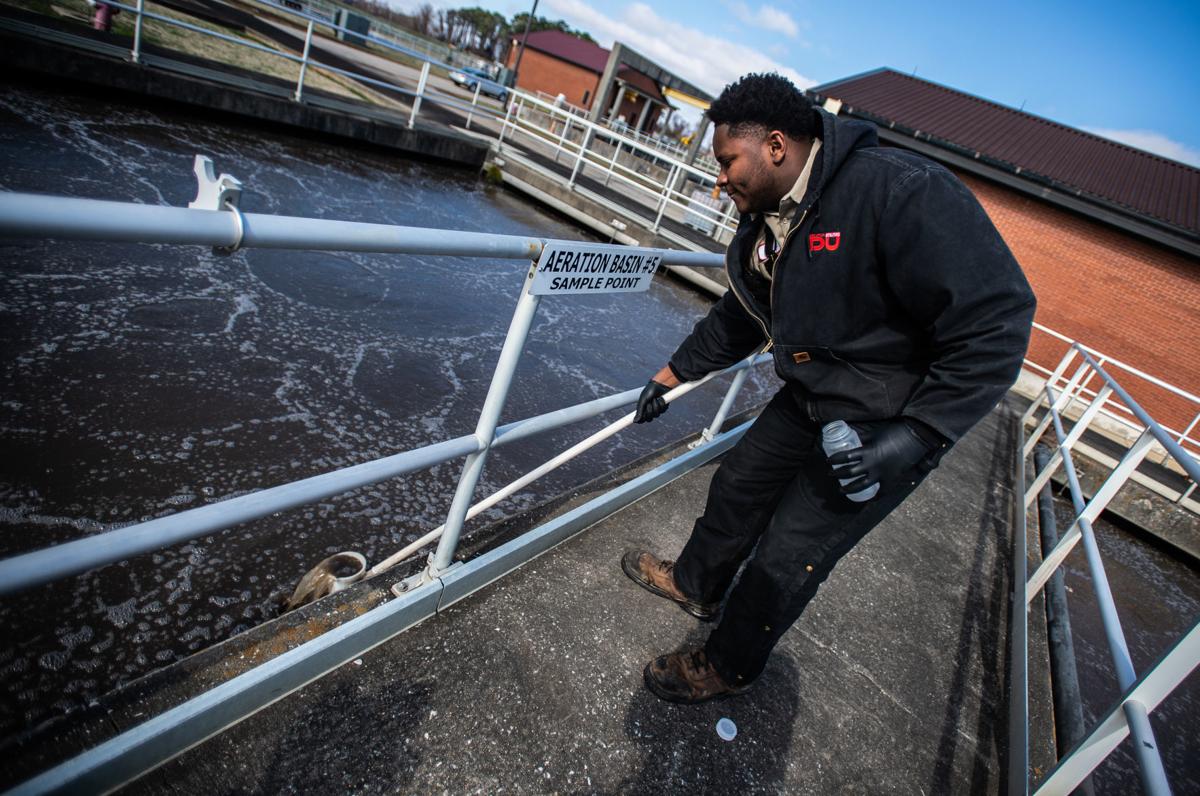 Javian Conley of Decatur Utilities takes a water sample from an aeration basin at the wastewater treatment plant Thursday morning. Joe Holmes, DU spokesman, said the treatment methods used at the plant remove the majority of microplastics before water is returned to the river. [DAN BUSEY/DECATUR DAILY] 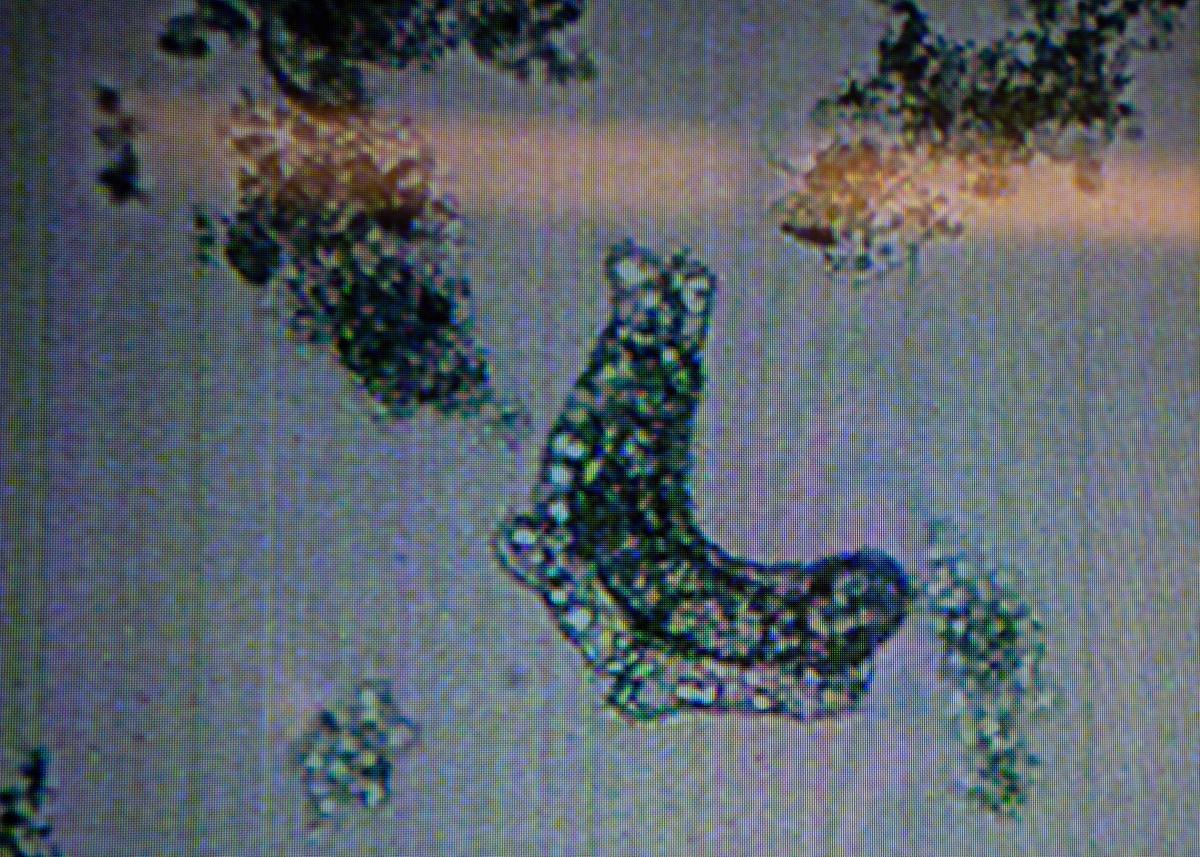 A tardigrade, known as a “water bear” micro-animal, is seen through a microscope at the wastewater treatment plant Thursday. [DAN BUSEY/DECATUR DAILY] 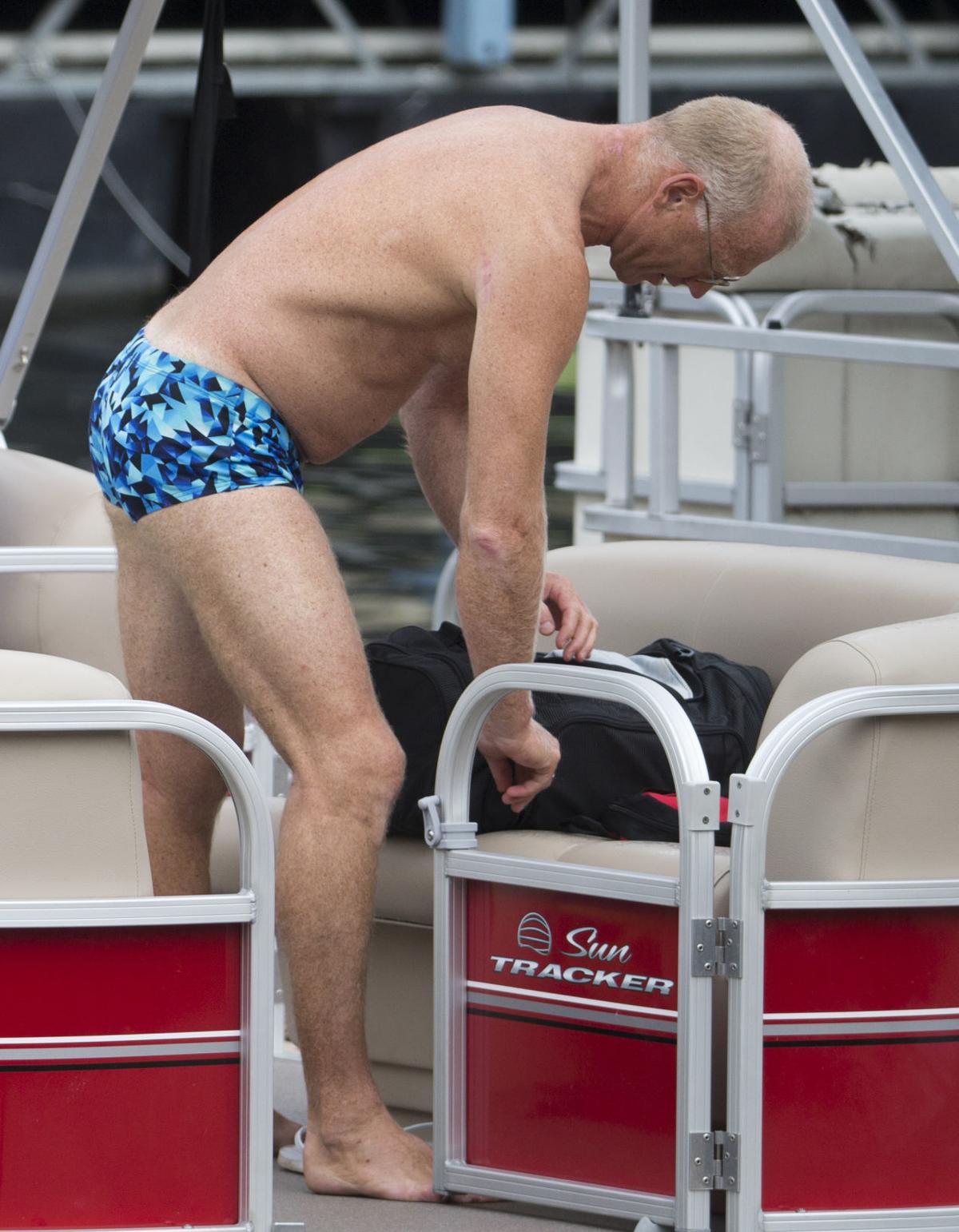 German Professor Andreas Fath prepares to put on his wet suit and head out of Florence Harbor in 2017 as he continues in his effort to swim the length of the Tennessee River. Fath collected water samples during the swim and found a high level of microplastics in the river. [MATT MCKEAN/FOR THE DECATUR DAILY] 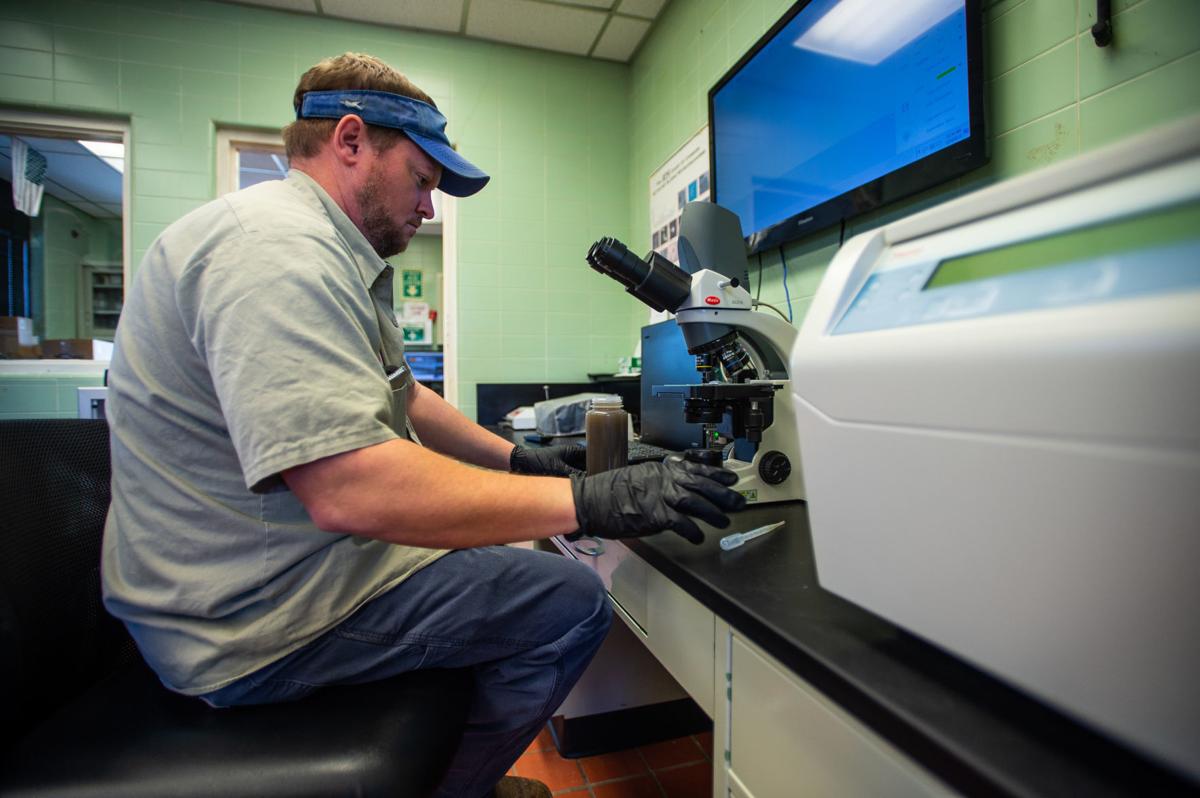 Javian Conley of Decatur Utilities takes a water sample from an aeration basin at the wastewater treatment plant Thursday morning. Joe Holmes, DU spokesman, said the treatment methods used at the plant remove the majority of microplastics before water is returned to the river. [DAN BUSEY/DECATUR DAILY]

A tardigrade, known as a “water bear” micro-animal, is seen through a microscope at the wastewater treatment plant Thursday. [DAN BUSEY/DECATUR DAILY]

German Professor Andreas Fath prepares to put on his wet suit and head out of Florence Harbor in 2017 as he continues in his effort to swim the length of the Tennessee River. Fath collected water samples during the swim and found a high level of microplastics in the river. [MATT MCKEAN/FOR THE DECATUR DAILY]

A cubic meter of Tennessee River water contains about 17,000 tiny plastic particles, and scientists’ increasing concern about the health effects of those microplastics when ingested by humans has added urgency to recent cleanup efforts.

Tennessee Riverkeeper last week organized a cleanup effort at Dry Branch Creek, a heavily littered waterway that connects to the Tennessee River in Decatur, and a dozen volunteers collected almost a ton of plastic and other materials.

“One of the sources of the microplastic pollution is plastic litter,” said David Whiteside, founder of the nonprofit organization. “This is pollution injury by a thousand cuts. With these cleanups, it’s easy to heal a small cut here and there. We can visibly see the results of cleaning that litter, and that's satisfying.”

The environmental hazards of microplastics in the ocean have been studied for years, but a German scientist focused attention on the Tennessee River in 2017 when he swam the length of the river, collecting water samples as he went.

The results from Professor Andreas Fath’s samples, released in October, were unexpected. While pharmaceuticals, heavy metals and other harmful chemicals were detected, they were generally at low levels consistent with a 652-mile river without a densely populated watershed. The surprise was the level of microplastics, defined as plastic particles smaller in diameter than 5 millimeters, or smaller than a grain of rice.

The levels were so high that researchers at first thought there had been an error, said University of the South geology professor Martin Knoll, who assisted Fath with the swim and the subsequent sample analysis. Multiple re-checks confirmed the Tennessee River had the highest concentration of plastic particles of any river ever tested, Knoll said. The 17,000 particles per cubic meter compared to 200 particles per cubic meter in the Rhine River in Europe, which has a watershed with a population 10 times that of the Tennessee River, and almost double the levels in China’s Yangtze River.

The various sources of these microplastics are not understood definitively, but it’s clear that litter is a significant contributor.

Plastics — from water bottles, bags and even clothing — break down into smaller particles when exposed to sunlight and current, according to Anna George, vice president of education and conservation at the Tennessee Aquarium.

Research to date has largely focused on microplastics in the ocean, George said. That focus was in part a reflection of an assumption that rivers would have comparatively low levels. Unlike oceans, scientists figured, the microplastics would not accumulate in flowing rivers.

“The main thing we wonder about is what we would call, if you want to be a nerd, ‘residence time,’ ” said George, who has a Ph.D. in biology. “We know once plastic gets in the ocean it stays there for a long time and builds up. What we don’t know is the residence time for plastics in freshwater. Our rivers do move, so there’s reason to believe plastic is flushing out constantly.”

“That’s what was surprising to us,” George said. “We actually expected to see less plastic in a river, because we thought it would be flushing out constantly. The fact we saw so much plastic in the river suggests that either residence time is longer than we thought or a lot more is entering than we thought, or perhaps both.”

Is the high level of microplastics a problem?

Probably, according to scientists. While research on microplastics in freshwater is just beginning, the oceanic research causes concern.

Some of the health concerns involve chemicals in the degraded plastic that can leach into the organs and bloodstreams of animals that consume them. Among these chemicals are endocrine disrupters, which can contribute to illnesses including inflammatory bowel disease and colon cancer. The particles can also cause mechanical damage to animal organs, according to some research, and some microscopic particles may even be small enough to enter the bloodstream and organs.

Researchers believe the more significant issue involves the tendency of plastic particles to bond to other chemicals, George said.

“Plastic adheres to anything it encounters,” she said.

This may account for findings that some ocean animals actually seek out plastics for consumption, George said, as the particles adhere to their food sources.

More troubling: Microplastics adhere to pollutants known to be toxic.

“It may be they’re just serving as magnets, essentially, and trapping pollutants around them,” George said.

When humans and animals ingest the particles, they’re not only getting plastic, they may also be getting a concentrated cocktail of pollutants, explained George.

Humans ingest microplastics directly through water, or by eating animals that have ingested them. Several studies have found microplastics in tap and bottled water, beer and soil.

Joe Holmes, a spokesman for Decatur Utilities, said there are no state or federal guidelines on treatment methods or acceptable concentrations for microplastics.

“However, based on our research, traditional treatment techniques such as coagulation, settling and sand filtration, all of which are employed at DU’s water treatment plant, are very effective in microplastic removal,” Holmes said.

The wastewater treatment plant also removes microplastics before water is returned to the river, using screening, clarification and biological treatment, he said.

“Traditional wastewater treatment methods such as those employed at DU’s Dry Creek Wastewater Treatment Plant have been shown to achieve in excess of 99 percent removal of microplastics,” Holmes said.

George emphasizes that research into microplastics is at an early stage. While there are indications the particles are harmful to organisms, including humans, scientists do not yet understand the degree of harm. Nor do scientists have a grasp on the primary source of the microplastics. In releasing the Tennessee River sample results, for example, Fath queried whether leachate from landfills contributes to the high levels.

What is clear, however, is that plastic litter — dropped in the river, or along roadsides that drain through sewers into the river — is a major contributor. This was borne out by Fath’s water samples, analysis of which indicated almost half of the filtered microplastic particles were polyethelene. As Knoll explains, polyethelene is the plastic used for most packaging and grocery bags. It’s also a common plastic for water and soda bottles.

In addition to participating in research, the Tennessee Aquarium in Chattanooga has joined with a consortium of 22 U.S. aquariums to actively reduce its use of the single-use plastics that eventually become waterborne microplastics, such as plastic straws and bottled soda. Small steps, but steps aimed in part at educating the 750,000 people who visit the aquarium each year.

Tennessee Riverkeeper plans to continue cleanup efforts, with one in Huntsville tentatively planned in February and another one in Decatur in March.

Unlike many pollution issues affecting the Tennessee River, Whiteside said, this is one citizens can see and help correct.

“Seeing the results of the litter being gone is an instant and satisfying victory, but it’s a small victory in the war against microplastics,” he said.

Society may be divided on many issues, Whiteside said, but not on this one.

“No one wants litter in their community and in their water, no matter how they vote,” he said. “This is a nonpartisan issue. Everyone can get behind litter removal. Everyone can see this problem, and they can help solve it.”

Our very sick Wheeler Lake…many of us who once enjoyed the recreation of fishing, boating, swimming, duck hunting and water skiing have stopped going to Wheeler Lake. Exposing ourselves, our children and our grandchildren to all these PFOA, PFOS and now micro-plastics toxins has kept us out of the Tennessee River.
Our recreational spending goes elsewhere now out of the reality of endangering all our health from all these toxins.
What other toxic revelations will be made about Wheeler Lake???

We're new to the area. Just moved to Decatur from out of state, in June.
What are your thoughts on the river beach at Point Mallard. My children spent a lot of time in that water over the summer, but I'm now concerned and am considering not returning this year.

Regarding Wheeler Lake, Flint Creek & the Pt. Mallard beach…consult the Alabama Dept. of Public Health (ADPH) and the Alabama Dept. of Environmental Management (ADEM) websites for all the Public Health Warnings for contacting the waters of Alabama’s rivers, streams & lakes. Flint Creek at Pt. Mallard beach will often have high bacterial concentrations during the summer month. Both ADPH & ADEM issue public warnings regarding toxic chemicals and bacterial dangers accordingly with specific locations noted, including any consumption of fish from these waters.

Thanks for the info!

Have you or someone you know had to apply for unemployment due to the coronavirus crisis?