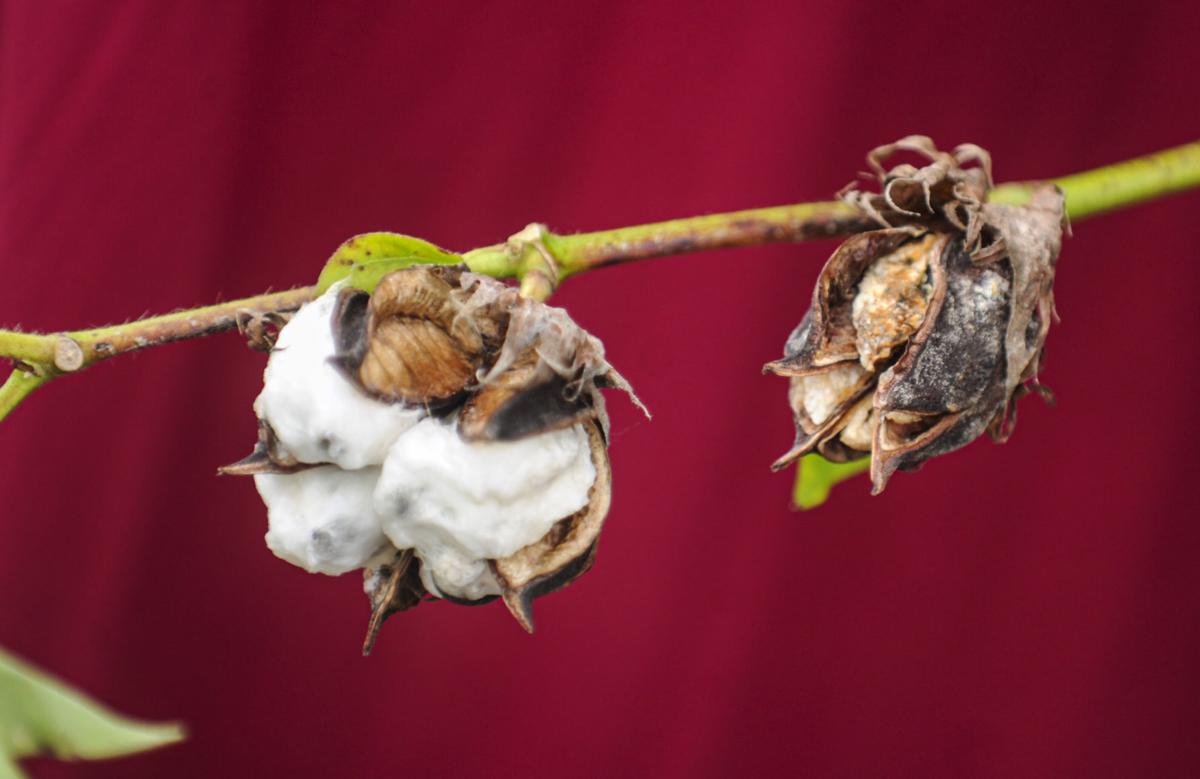 A boll of cotton that is rotten due to excessive moisture, right, is shown on the same branch as a healthy one. [JERONIMO NISA/DECATUR DAILY] 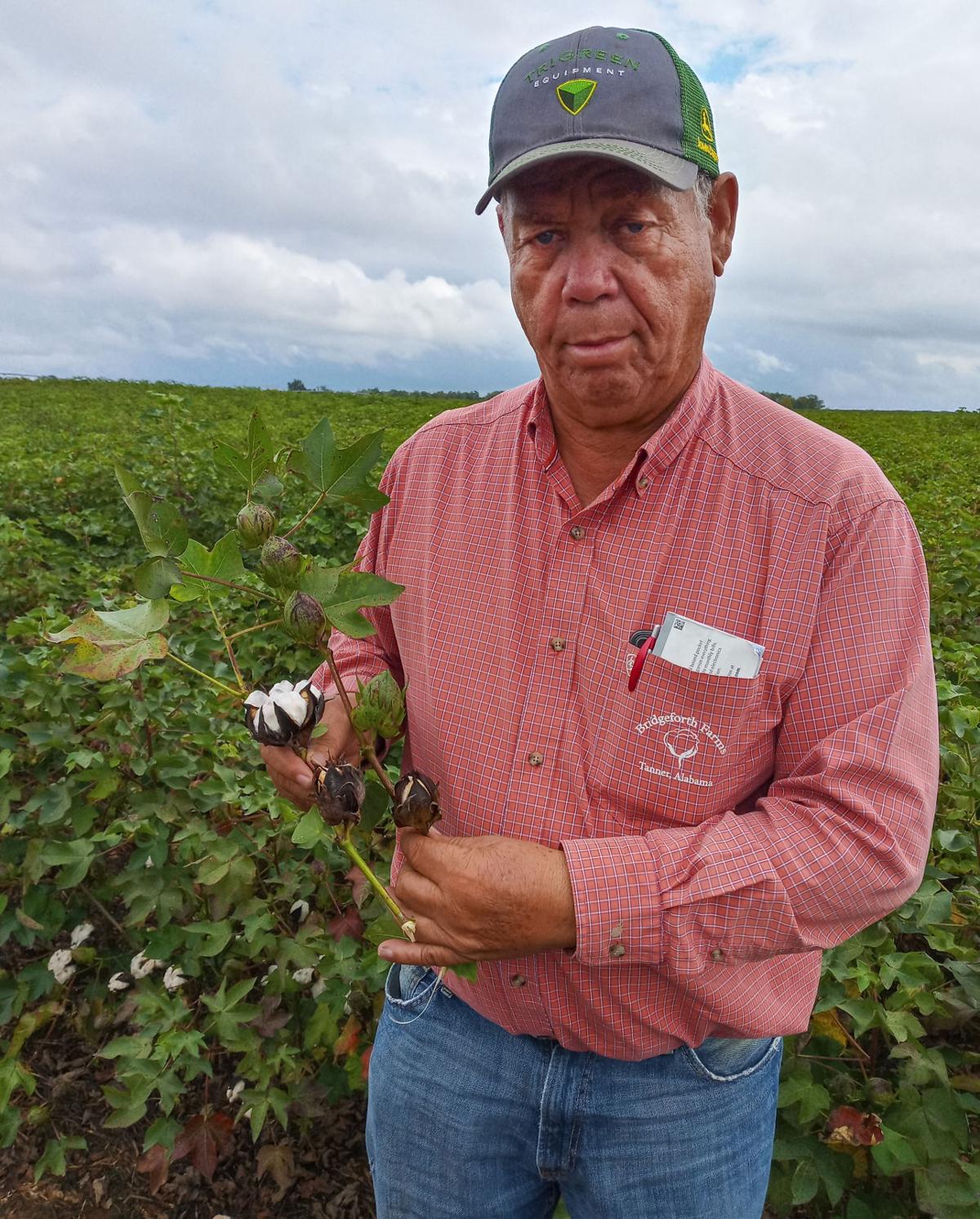 Greg Bridgeforth shows a branch containing both healthy and rotten bolls at his farm in Tanner this week. [ERICA SMITH/DECATUR DAILY] 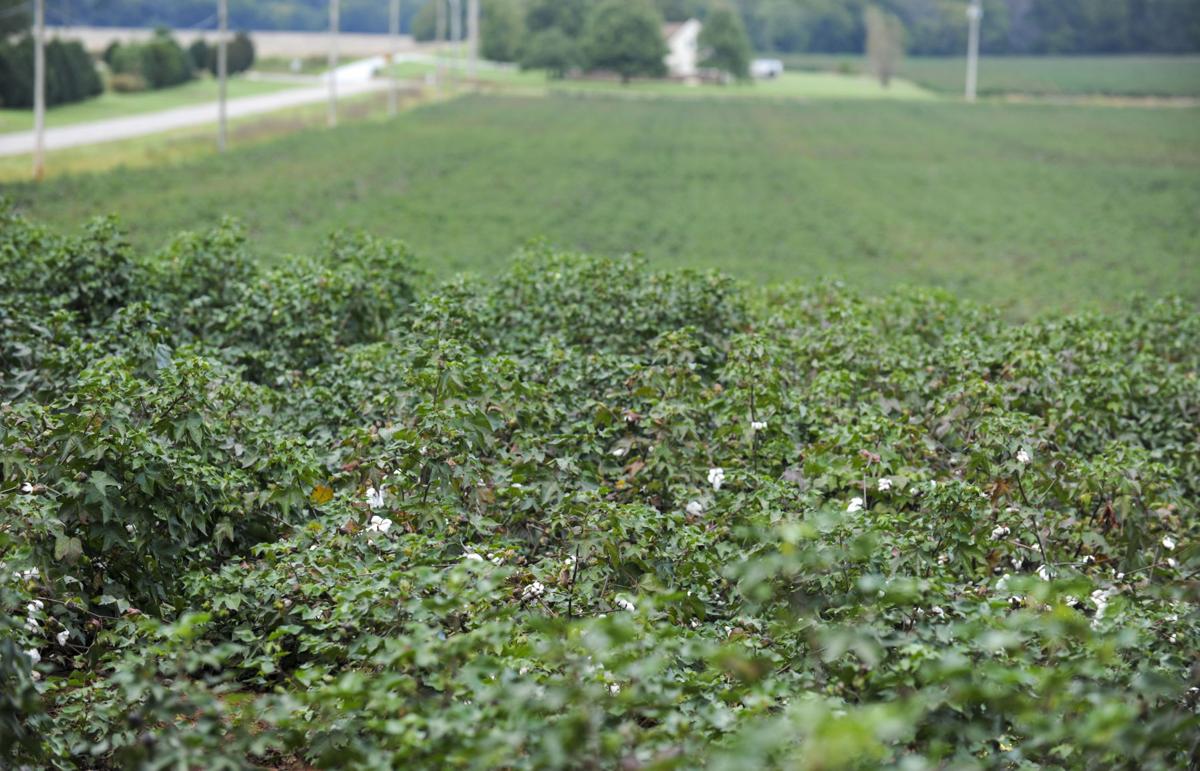 A cotton field in southern Limestone County is seen between storms this week. Cotton farmers usually are harvesting by now, but the crop has been delayed this year. [JERONIMO NISA/DECATUR DAILY] 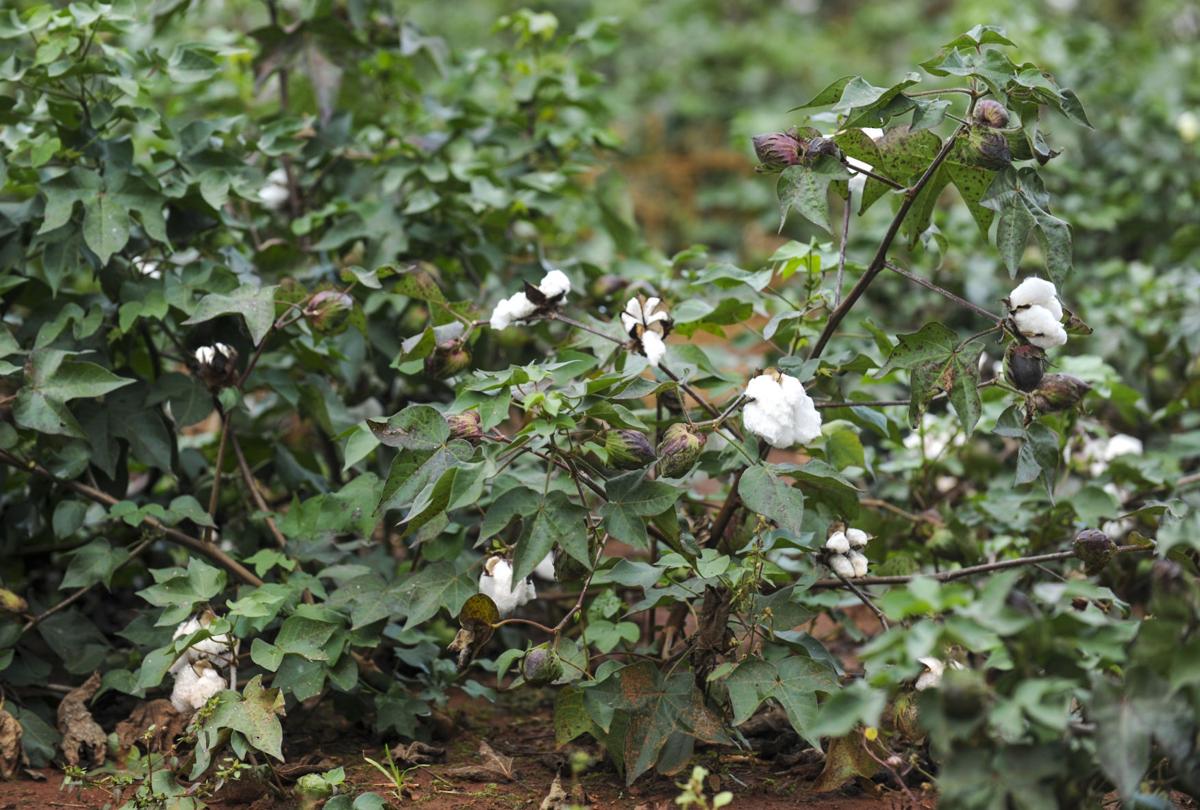 A cotton field in southern Limestone County is seen between storms this week. [JERONIMO NISA/DECATUR DAILY]

A boll of cotton that is rotten due to excessive moisture, right, is shown on the same branch as a healthy one. [JERONIMO NISA/DECATUR DAILY]

Greg Bridgeforth shows a branch containing both healthy and rotten bolls at his farm in Tanner this week. [ERICA SMITH/DECATUR DAILY]

A cotton field in southern Limestone County is seen between storms this week. Cotton farmers usually are harvesting by now, but the crop has been delayed this year. [JERONIMO NISA/DECATUR DAILY]

A cotton field in southern Limestone County is seen between storms this week. [JERONIMO NISA/DECATUR DAILY]

Greg Bridgeforth didn't have to look hard to find a rotten cotton boll. He took only a few steps into fields his family farms in Limestone County and found several earlier this week.

The rotten bolls are only one of the problems north Alabama cotton farmers are encountering this year. At a time they should be harvesting their crop, they are still waiting for many bolls to open. Adverse weather like heavy rainfall delayed planting, forced replanting in some cases and caused some bolls to rot.

“It’s very late. It’s scary late,” said Bill Bridgeforth, Greg's brother and part of the family running Bridgeforth Farms, which had about 3,500 acres planted in cotton. “Most years we would already be picking by now. So, it might be end of October, first week of November before we even start picking.

“It’s certainly not an ideal situation.”

However, there's still hope for good yields. Steve Brown, cotton agronomist for the Alabama Cooperative Extension System, said state farmers are projected to harvest 924 pounds of cotton per acre this year. They harvested 770 pounds per acre a year ago. Brown said the yield is likely to be less than the latest projection but probably won't drop below 850 pounds per acre in the state.

North Alabama will likely yield less than usual, due to the excessive rain and a late crop, said Brown. "It's going to take some sunshine and some early harvest to kind of give us an indication of how badly different areas are hurt." According to Brown, less than half a percent of the cotton has been harvested at this point.

Amanda Scherer, plant pathologist for the extension system, said wet conditions delayed planting, which is usually done from mid April through the beginning of May.

“For the amount of rain that we had, especially at the beginning, it made it really hard for quite a few producers to actually get in the field,” Scherer said. “There was some that got in, when they normally would, but it was a little bit cooler.”

She said those conditions caused some disease, and those crops had to be replanted.

This was the case at Bridgeforth Farms. Bill Bridgeforth said they had to replant some cotton in May.

“That’s another reason why we’re running late," he said. "Cotton was planted toward the middle or end of May on account of disease and cool weather.”

Brown said the timing of the planting “is probably more critical in the north Alabama area than it is as we go south because you have a shorter season, you have an earlier frost date."

Brown said the cotton is beginning to open, but “again because of the weather, we have harvested very little.”

“Normally, what happens when it gets to this time of year, we treat the crop to remove the leaves and to open those bolls and try to get most of them open at once so we can pick it all at once,” said Brown. All of that has been pushed back due to weather and late planting.

According to Brown, rain reduces both the quality and amount of cotton harvested. The cotton this year is not expected to be as white or have as strong of fiber, which Brown said are things the textile mills look for.

Even when some bolls do open, they can still have problems. Scherer said, “We’re starting to see, as we’re getting some of this rain, as the bolls open, we’re going to see a lot of hardlock. That’s when you get those mummified bolls, the lint is just really hard."

Scherer said if the air is extra moist or dense, you can see some boll rot. “That is caused by different fungal diseases, but fungicides don’t really seem to help combat that. ... But just with the weather being so wet this year, it’s kind of really conducive conditions for any of those diseases.”

Bridgeforth said boll rot has been a real problem this year with his crops, but he remains hopeful. “If the weather turns favorable and the cotton starts to open, like it normally would, I think we’ll still have a real good crop. It’s too early to tell.”

The best conditions for cotton, according to Brown, would include rain only from May to mid September. He said when the cotton begins to open, the best conditions are sunny days, low humidity, and a slight breeze.

The reason the cotton acreage has decreased may also be due to weather, said Brown. Alabama was affected in 2020 by Hurricane Sally and other hurricanes that disturbed the cotton crop, said Brown, making growing and harvesting the cotton a challenge and ultimately a disappointment.

“Cotton is a very intensely managed crop, as opposed to corn and soybeans, and it’s an expensive crop to grow, too,” said Brown. “To have some challenges at the end, maybe the cost of production and the frustration of 2020, may have contributed to the decline in acres.”

When them cotton bolls get rotton, you can't pick very much cotton.