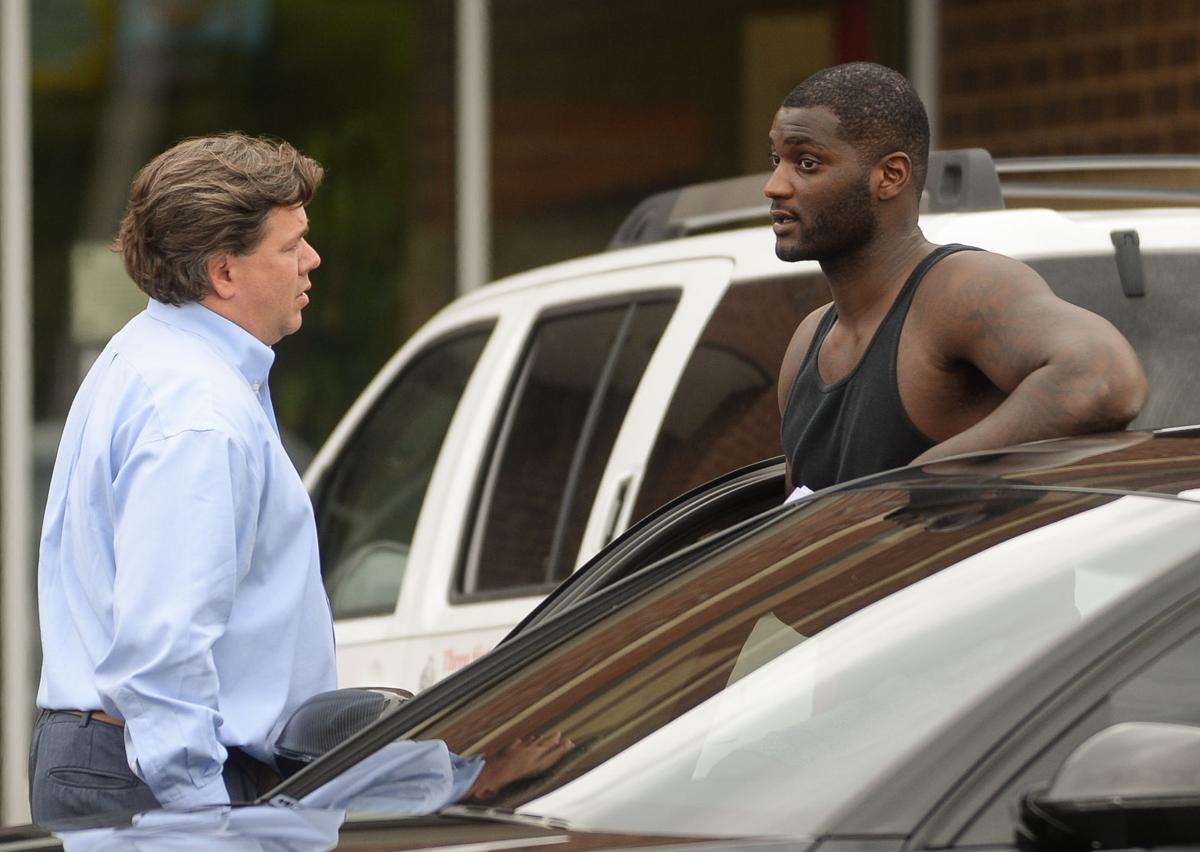 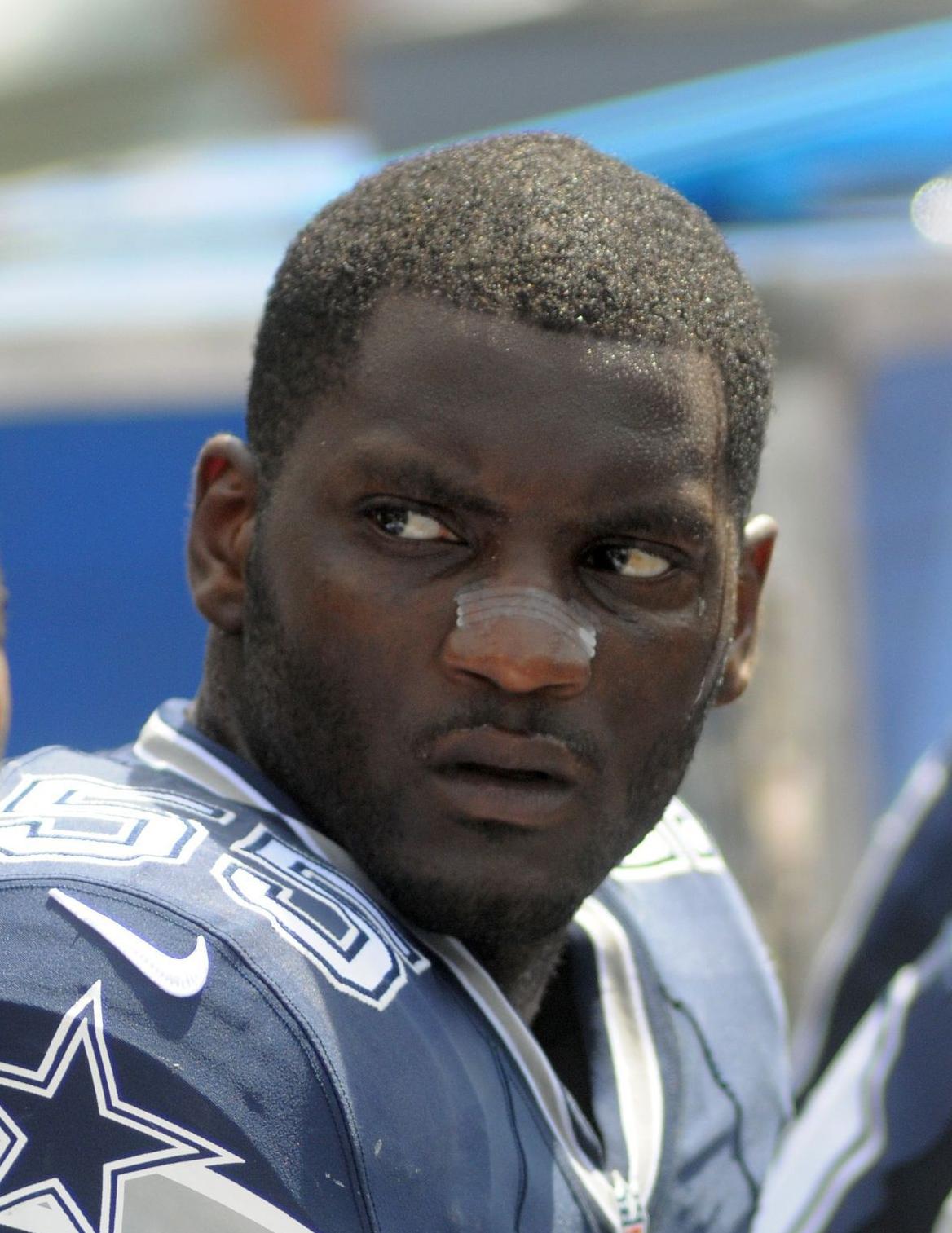 Former Decatur High and University of Alabama football star Rolando McClain most recently played for the NFL's Dallas Cowboys in 2014-15. He is shown in 2014. [DEANGELO MCDANIEL/DECATUR DAILY/FILE]

Former Decatur High and University of Alabama football star Rolando McClain most recently played for the NFL's Dallas Cowboys in 2014-15. He is shown in 2014. [DEANGELO MCDANIEL/DECATUR DAILY/FILE]

HARTSELLE — Former University of Alabama and NFL linebacker Rolando McClain was arrested in Hartselle today on equipment violations, and firearm and drug charges, according to the Hartselle Police Department.

Officers conducted a traffic stop of a vehicle for an alleged window tint violation on Chestnut Street near the U.S. 31 and Alabama 36 junction, Hartselle police spokesman Lt. Justin Barley said.

As the officer approached the vehicle, he smelled marijuana coming from the vehicle and conducted a search, Barley said. McClain was found with marijuana and also was carrying a firearm without a permit, Barley said.

McClain, 27, was charged with second-degree possession of marijuana, carrying a firearm without a permit and a misdemeanor equipment violation. He was released from the Morgan County Jail on $2,000 bail, McClain’s lawyer, Carl Cole said.

A Decatur native, McClain was coming to town to visit with his family when he was pulled over, Cole said.

“He had just got off the interstate and was in Morgan County for less than three minutes (before he was pulled over),” Cole said. “He was pulled over for the window tint, which led to the other stuff. I hate to quote Nick Saban, but it is what it is.”

Cole said McClain has a compelling story to tell. He also said most people from the area recognize his truck when he comes into town.

Cole said the firearm McClain was carrying Friday was “just a run of the mill handgun” that was registered to McClain.

After McClain was released from jail Friday, he went to pick up his kids from school, Cole said. “That was his priority,” he said.

Cole noted the charges from Friday's arrest are misdemeanors. “It was a small amount of marijuana and it was a misdemeanor,” Cole said. “He’ll have an appearance to make in July and hopefully we’ll handle it then.”

McClain, who starred in football and basketball at Decatur High, most recently played for the Dallas Cowboys in 2014-15.

He was suspended indefinitely by the NFL in December after missing the 2016 season. The Cowboys said he was suspended "without pay for violating the NFL policy and program for substances of abuse.”

McClain missed a test, which is considered a positive test by the NFL, and had appealed it. The league’s announcement meant the appeals process had been completed.

McClain sat out the 2013 NFL season before playing in 24 games the next two seasons with the Cowboys. He re-signed with the Cowboys in March 2016, getting a one-year deal worth a reported $5 million.

The Cowboys traded for McClain before training camp in 2014 after linebacker Sean Lee sustained a season-ending knee injury in the offseason. McClain got his career back on track with two solid seasons.

A former No. 8 pick by the Oakland Raiders in 2010, McClain retired from football at age 23 after a short stint with the Baltimore Ravens before moving on to Dallas.

Friday's window-tint citation was not McClain's first. He received the same citation in January 2013 and presented officers with a doctor’s letter citing his “photosensitivity,” Decatur police said at the time.

However, McClain refused to sign the ticket with his name and instead wrote “(expletive) y’all,” police said in 2013. He was subsequently taken to jail on a charge of giving a false name to a police officer, according to a police report. McClain later pleaded guilty to the window-tint violation, but a city judge dismissed the charge of giving a false name to law enforcement as part of a plea deal worked out with the city prosecutor. The window-tint case was closed after the court received payment of $182 in fines.

Misdemeanor disorderly conduct and resisting arrest charges against McClain, which stemmed from an April 2013 incident at Pines Park in Decatur, were dismissed in Morgan County Circuit Court in May 2015. In that incident, police were trying to disperse a crowd when, police said, McClain shouted an expletive at police and pulled away from officers trying to arrest him.

McClain was convicted on the charges in city court but appealed the case to Circuit Court. The arrest in the April 2013 incident was his third in his hometown in 18 months.

In November 2011, McClain was accused of assaulting friend Rishard Tapscott and threatening him with a gun. He was found guilty of all charges in Decatur Municipal Court but appealed to Morgan County Circuit Court. A judge dismissed the case in November 2012 after Tapscott decided to drop the charges, according to court records.

Decatur Youth Services PALS coordinator Rico Pickett Sr. said he has been surprised by some of the things McClain has been involved with the past few years.

“I have nothing negative to say about him. He was a good kid growing up. When he was around me, he was fine,” Pickett said.

McClain grew up participating in the summer programs with the Boys and Girls Club, Pickett said.

So Rolando McClain was found at a traffic stop to be smoking weed in his truck before he, supposedly, was going to pick up his children (his "priority") at school. Isn't this considered DUI? And shouldn't he be warned about endangering the health of his kids? He doesn't seem to understand much about basic traffic laws, use of illegal substances behind the wheel, or parenting.

How much do you trust guidance from the Centers for Disease Control and Prevention?