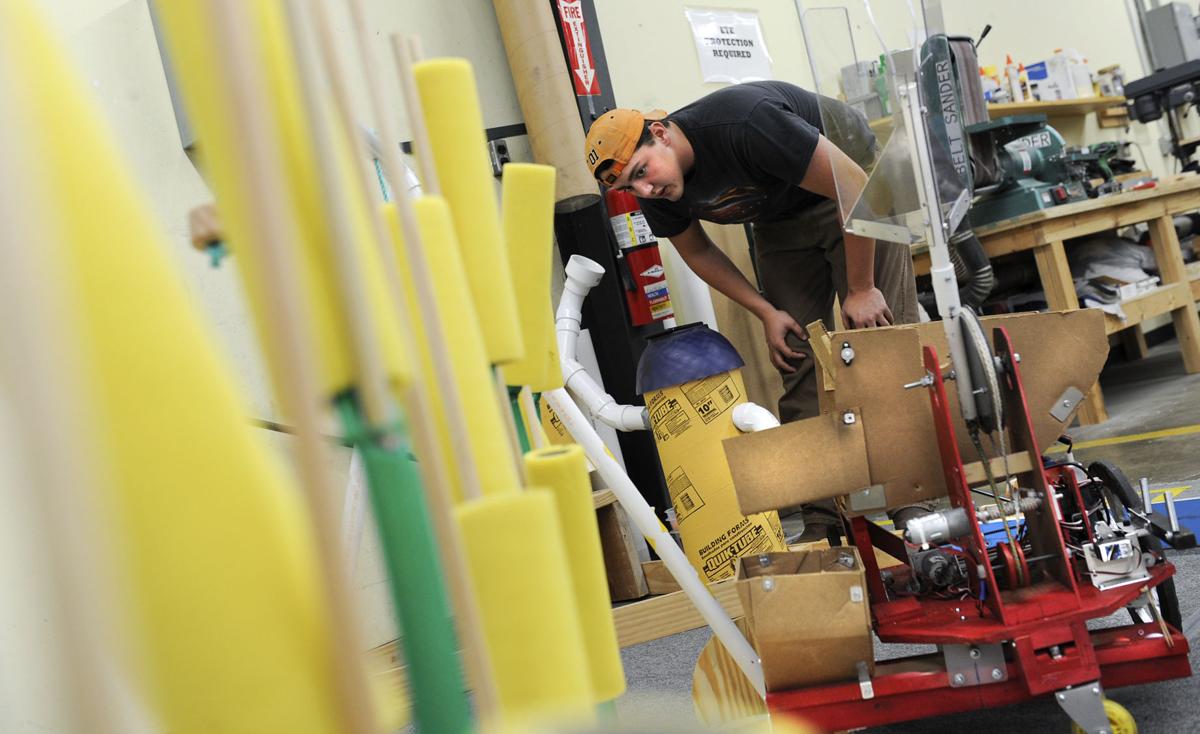 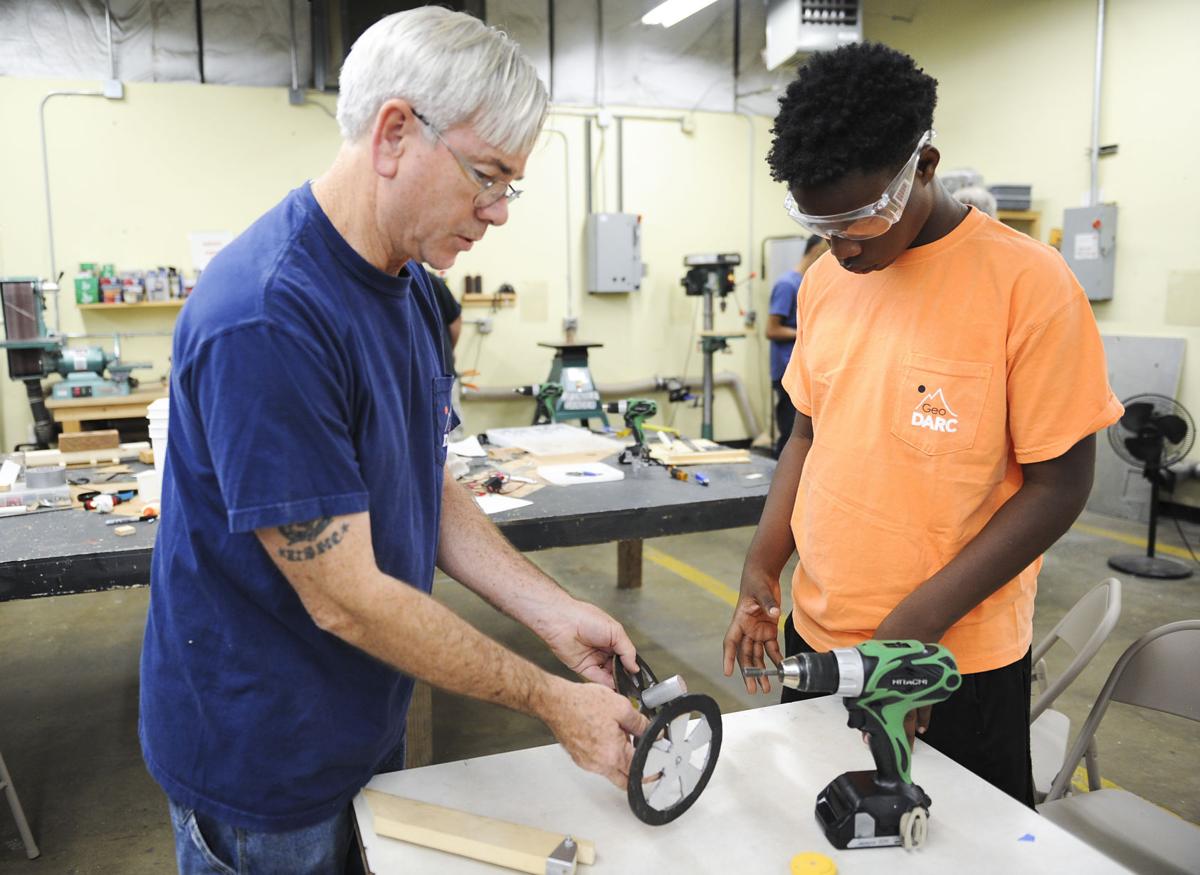 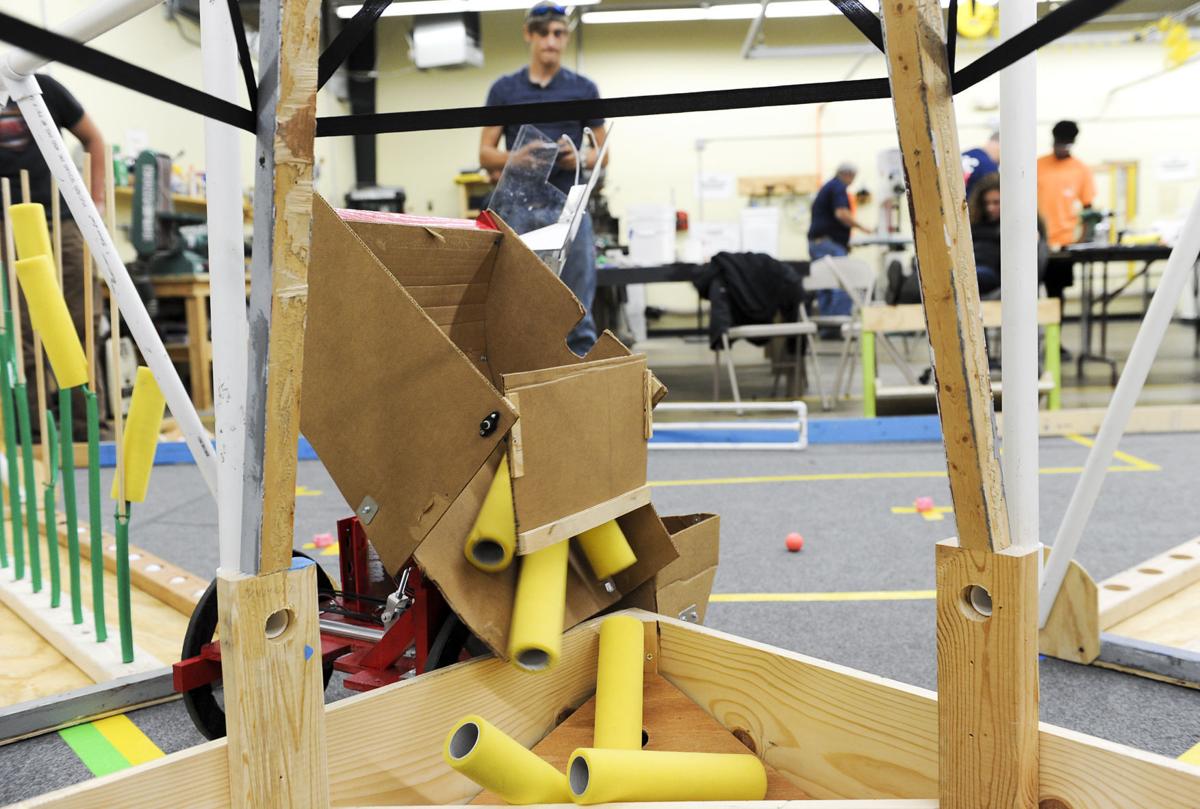 The DARC robot drops "corn" in a corn mill as the team practices. JERONIMO NISA/DECATUR DAILY

The DARC robot drops "corn" in a corn mill as the team practices. JERONIMO NISA/DECATUR DAILY

A member of the Decatur-Austin Robotics Coalition jokingly called “Red” will start the challenge Saturday to prove which theory is best for modernizing an Alabama farm.

DARC — a robotics team of students from Austin and Decatur high schools — is among 12 squads that will compete beginning at 10 a.m. in the annual Tennessee Valley Boosting Engineering Science and Technology Competition at Calhoun Community College.

The first- and second-place teams will earn a berth in the South’s BEST Regional Robotics Competition at Auburn University next month. At Auburn, regional winners from Alabama, Tennessee, Mississippi, Georgia and Florida will compete.

The theme of this year’s competition at Calhoun is “Bet the Farm,” said DARC Chief Executive Officer Claire Crane, a senior at Decatur High.

She said the competition revolves around a fictional farmer referred to as “Mr. Bread.” He has four children who are college graduates with different opinions about the direction their father should take to modernize his farm.

Mr. Bread is seeking proposals from robotic companies to settle the dispute.

To return to the regional event at Auburn — a place the team has been 13 of the past 14 years — DARC has to prove to the farmer that its robot is the best one to help the farm plant seeds and harvest crops, DARC sponsor Susan Haddock said.

“It’s challenging, but I’m sure they will be ready,” she said.

Combined teams of Athens and Tanner students, as well as teams from Decatur Heritage and Lindsay Lane Christian Academy in Athens, are among the squads that will try to unseat DARC as the most dominant team from the 2015 competition.

Those results came a year after the squad failed to qualify for the Auburn competition in 2014.

“We don’t want that to happen,” said Crane, who has been DARC’s CEO two years and involved with robotics for five years.

For the second year, Crane has written DARC’s engineering notebook, which documents the robot's design and engineering.

Haddock said the notebook is one of the most important parts of the competition because it counts 30 points.

As the team does historically, DARC members have logged more than 500 hours in the past six weeks — and Cameron Kirkes, an Austin senior, has been the head of engineering.

He said his goal was to get the team working toward one goal. Kirkes said the most important phase was design.

As for strategy, team members were silent as they practiced in space at the Decatur-Morgan County Entrepreneurial Center. They referred questions to Crane, Kirkes and Haddock.

“I can’t say what it is,” Crane said, referring to DARC’s strategy. “But I can tell you I’m confident we will be ready.”