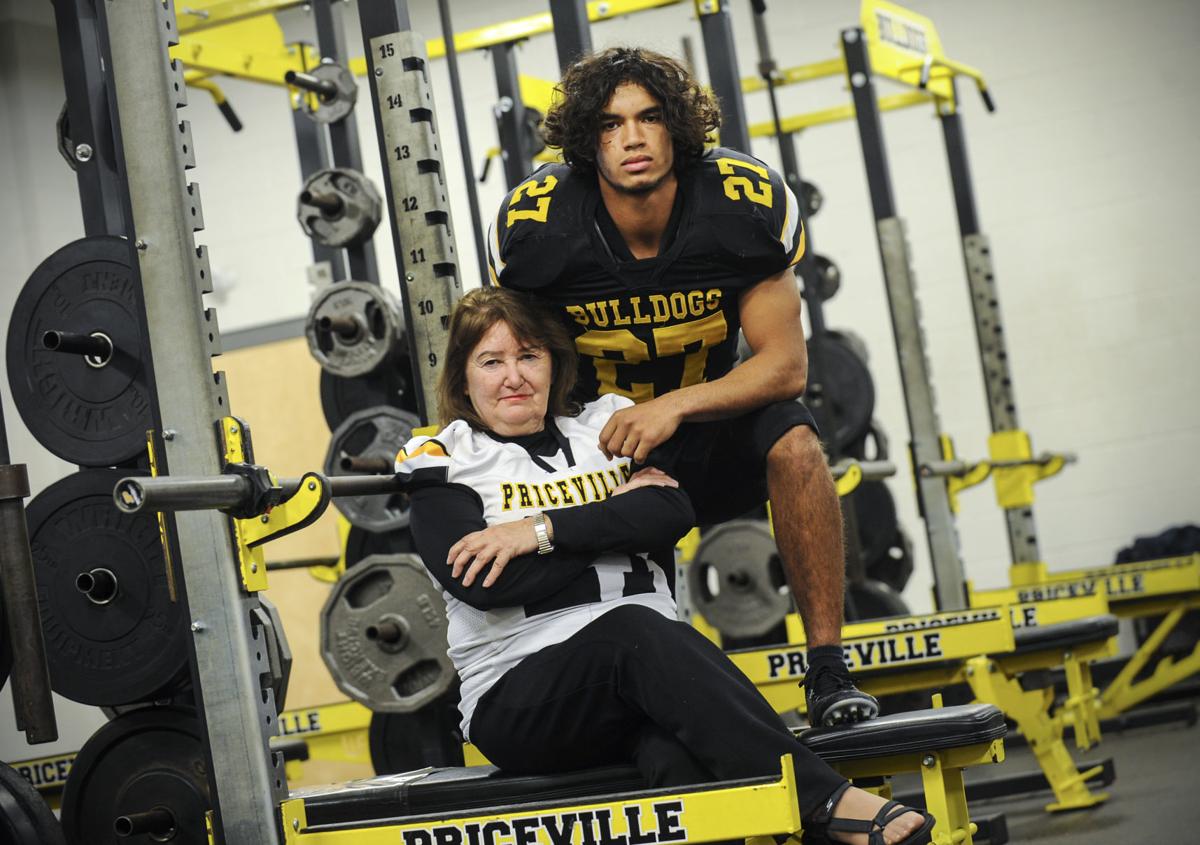 Priceville running back Jerry Burton says his grandmother, Faye Ogle, is the most important person in his life. He has overcome challenges in his personal life to rush for 2,203 yards entering tonight's home playoff game against Rogers. [JERONIMO NISA/DECATUR DAILY] 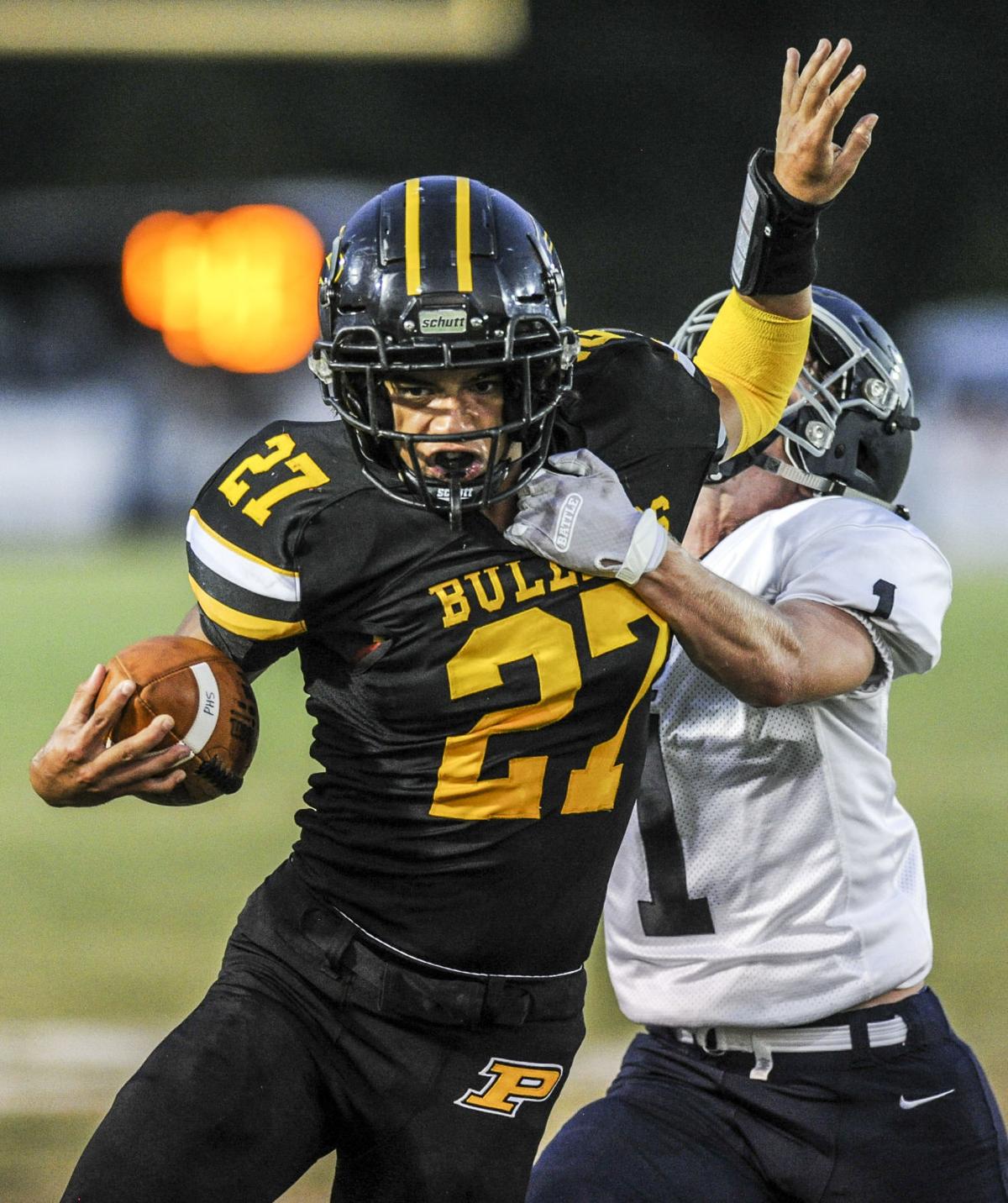 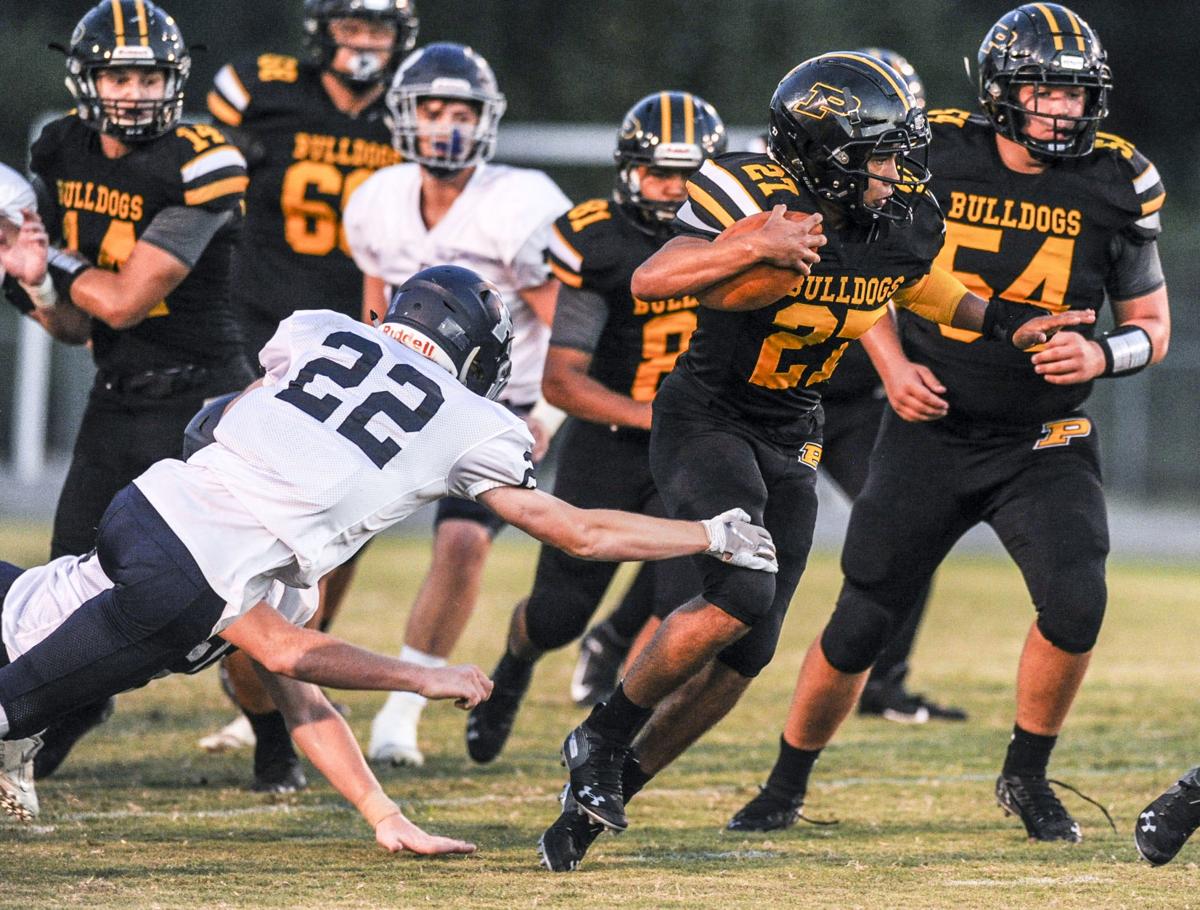 Jerry Burton (27) and Priceville will host Rogers tonight in the first round of the playoffs. [JERONIMO NISA/DECATUR DAILY]

Priceville running back Jerry Burton says his grandmother, Faye Ogle, is the most important person in his life. He has overcome challenges in his personal life to rush for 2,203 yards entering tonight's home playoff game against Rogers. [JERONIMO NISA/DECATUR DAILY]

Jerry Burton (27) and Priceville will host Rogers tonight in the first round of the playoffs. [JERONIMO NISA/DECATUR DAILY]

PRICEVILLE — Jerry Burton was certain the message he received while attending a youth camp with his church in North Carolina meant he had to quit football.

His grandmother, Faye Ogle, wasn’t so sure, and neither was former Priceville head coach Jason Simmons in the summer of 2018.

“I told Coach Simmons I was giving up football, because at that point in my life, football was more important to me than God,” Burton recalled. “And that wasn’t right.”

His coach told him to think about his decision for two weeks. His grandmother — who has been his legal guardian since he was 1 and the person Burton calls the most important in his life — had a different take.

“I wanted him to think about his decision, but I also told him to put God first and everything else second,” Ogle said.

Burton, a junior, listened, found a direction for his life and tonight will continue what he called his “run for God” in one of the most remarkable seasons in Priceville history as the Bulldogs play visiting Rogers in the first round of the Class 4A playoffs. He has rushed for 2,203 yards and 28 touchdowns on only 291 carries and has piqued the interest of small-college coaches.

But the football numbers are not that important to Burton, 16, and having a target on him every time he carries the ball is not the toughest challenge he’s faced in life.

Because of what he called “some bad decisions,” Burton’s mother lost custody of him and his older sister when he was a little more than a year old. He said they were temporarily in a state of limbo before the Alabama Department of Human Resources awarded his grandparents custody of them.

Ogle said the process wasn't simple. DHR officials thought she and her late husband, Jerry Ogle, were too old. He died in February 2014.

“But we were all they had, and we wanted them to stay together,” she said.

Burton said he was too young to remember a lot of what happened in his life until later in elementary school. He said he struggled without parents “because I saw other children with their parents.”

Burton said he realized his situation was different but at some point decided he didn’t want lack of parents to define who he was or what he became because his grandparents provided a stable home.

“People blame their situation too much, and I didn’t want this to be me,” he said.

Burton said his life was “as normal as it could be” but then his grandfather died. He said athletics and people like his neighbor and best friend Peyton Fowler helped him get through tough times.

Ogle said she worried about raising a boy alone, but her grandson gave her no problems and followed every rule she put in place for him.

“If I told him to be home at a certain time, he was home,” she said.

Ogle also talked with him about how to treat people and taught him that nothing was bigger than God.

He apparently got the message. Fowler, a junior who plays running back and cornerback, said he doesn’t remember a time when Burton didn’t put others first and have a humble personality.

“A lot of people look up to him in school, but he’s just Jerry,” Fowler said. “He’s a people person and would rather everybody around him be happy before he’s happy.”

“Let me tell you something, he’s just a great guy and every time we talk about all his yards, he wants to talk about the guys blocking for him,” Holmes said. “This guy is so humble and a great teammate.”

Just how humble Burton is was on display Wednesday while he was being interviewed in the school’s library.

Jenna Walker, a junior on the girls basketball team who has scholarship offers from several Southeastern Conference schools, walked in.

“Now, there’s my role model and the player I have looked up to,” Burton said. “Did you know she has been a starter on the varsity team since eighth grade?”

Allen Stover, who is youth pastor and music minister at The Ark Family Worship Center where Burton attends church, is not surprised that Burton chose to talk of a classmate instead of himself.

“He’s one in a million,” Stover said. “The youth, no matter whether it’s in church, at school or at a summer camp, are drawn to Jerry.”

Stover was at the camp and one of the first people Burton told about his plans to quit football.

“I told Jerry I didn’t know what God was trying to speak to him about, but he should do everything for God’s honor and glory,” he said. “I also told him it could be God wanting to know if he was willing to give up football for him.”

For months before the camp, Stover said he and Ogle had been talking about Burton’s involvement with athletics because he was also playing travel basketball and this was causing him to miss a lot of church.

“God has so blessed him since he put God first,” Stover said. “I’m tickled to death with what he’s accomplished on the football field, but what means more to me is he’s put Christ first in his life. He’s an amazing young man.”

In his sophomore season, Burton rushed for 1,350 yards and 13 touchdowns on 250 carries. But, he said the 2018 numbers didn’t mean anything because they were not good enough to get his team back into the playoffs for the first time since 2015 when the Bulldogs lost to Hamilton by one point in the first round.

Priceville’s only other playoff appearance came in 2007 when the team lost 28-0 to St. Clair County in the opening round. Burton, who is 5-foot-10 and 175 pounds, said he wants to help change the school’s football history, and a win tonight will do that.

But he has what he calls a more important goal: bringing people close to God.

Burton said a lot of what he is goes back to the months following the summer camp when he told anyone who would listen he was quitting football.

He said his grandmother shared with him a lot of stories in the Bible and told him God would show him the way. Burton said no one judged him, but gave him time and space to figure out what message he had received at camp.

He said what he figured out was that his spiritual life wasn’t where it should be and that he had “to get things prepared because he was not ready for God.”

Principal Mark Mason said Burton is “as tough as a pine knot on the football field,” but is humble and one of the most unselfish students at Priceville.

“If every student was like him, there would be no problems in school,” he said.

Burton doesn’t hide his relationship with God, but he also doesn’t talk about others who are on their road to Christ.

“Life is a lot easier with Him and doing the right thing is easier when He’s with you,” he said. “What I have accomplished in football is because of God. He’s blessed me with good teammates, coaches and classmates. And, he’s put the best grandparents and family members in my life. I’m blessed."

Here is the schedule for area teams in the first round of the state high school football playoffs. Admission is $8.

God bless this young man and his grandmother as well.