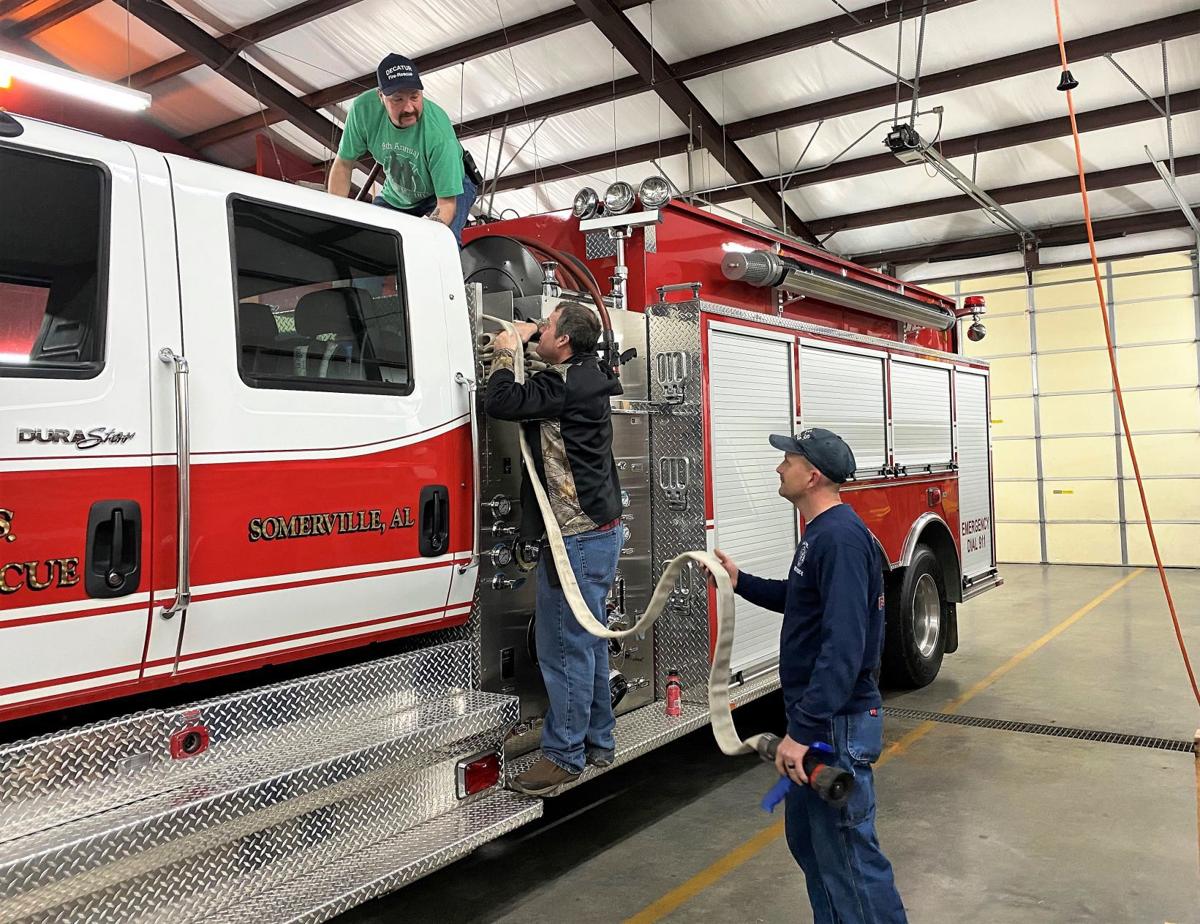 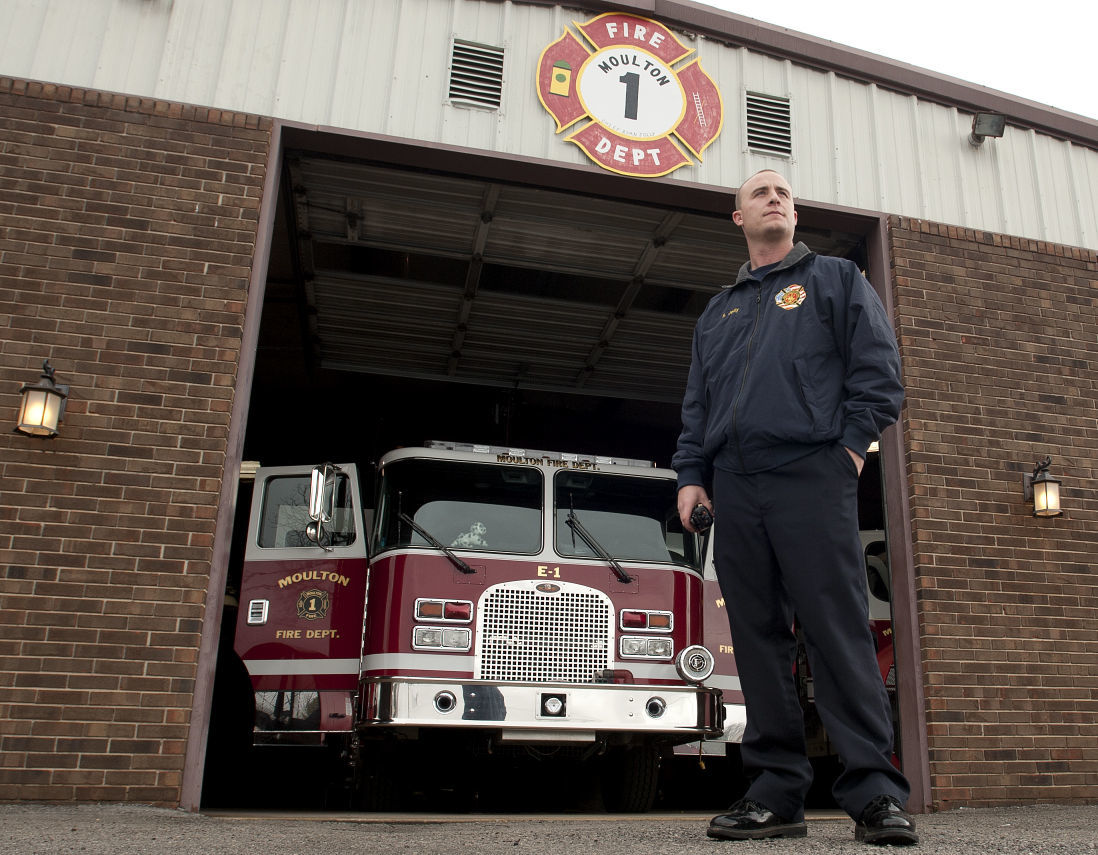 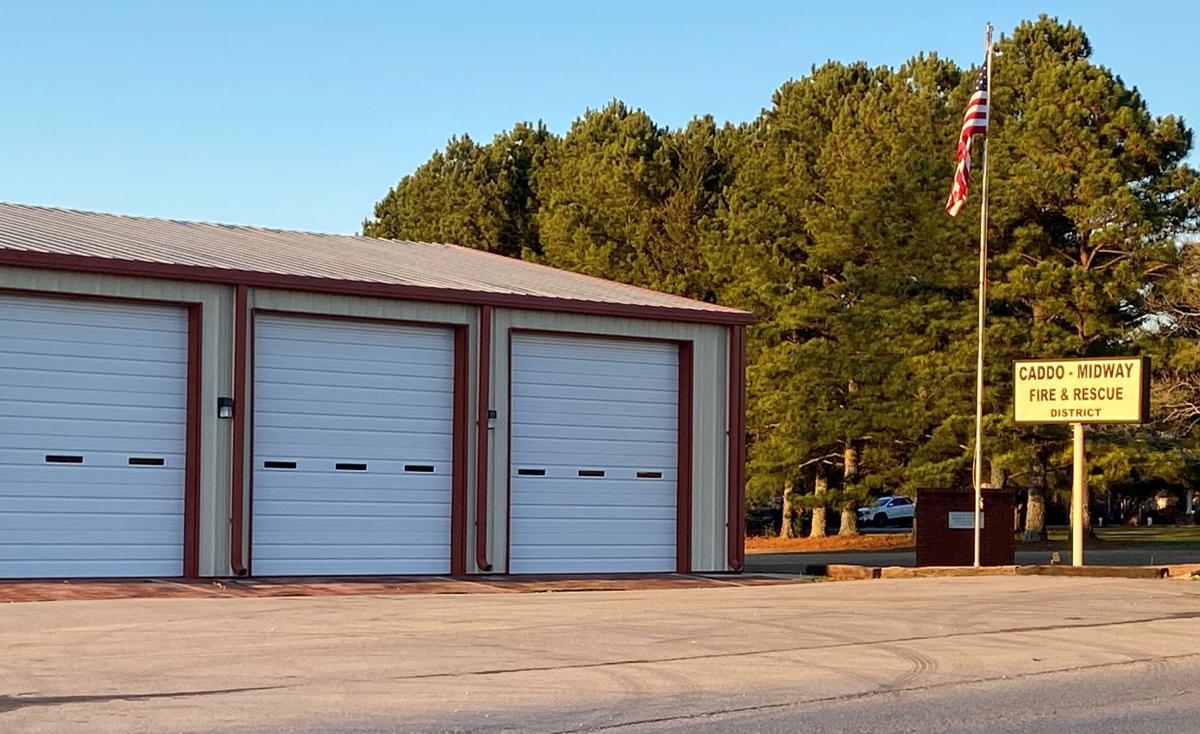 The Caddo-Midway Fire and Rescue District operates on $65,000 annually with $38,500 coming from the property tax fire fee and the other money coming from grants and fundraisers, said administrative chief Darwin Clark. [MICHAEL WETZEL/DECATUR DAILY] 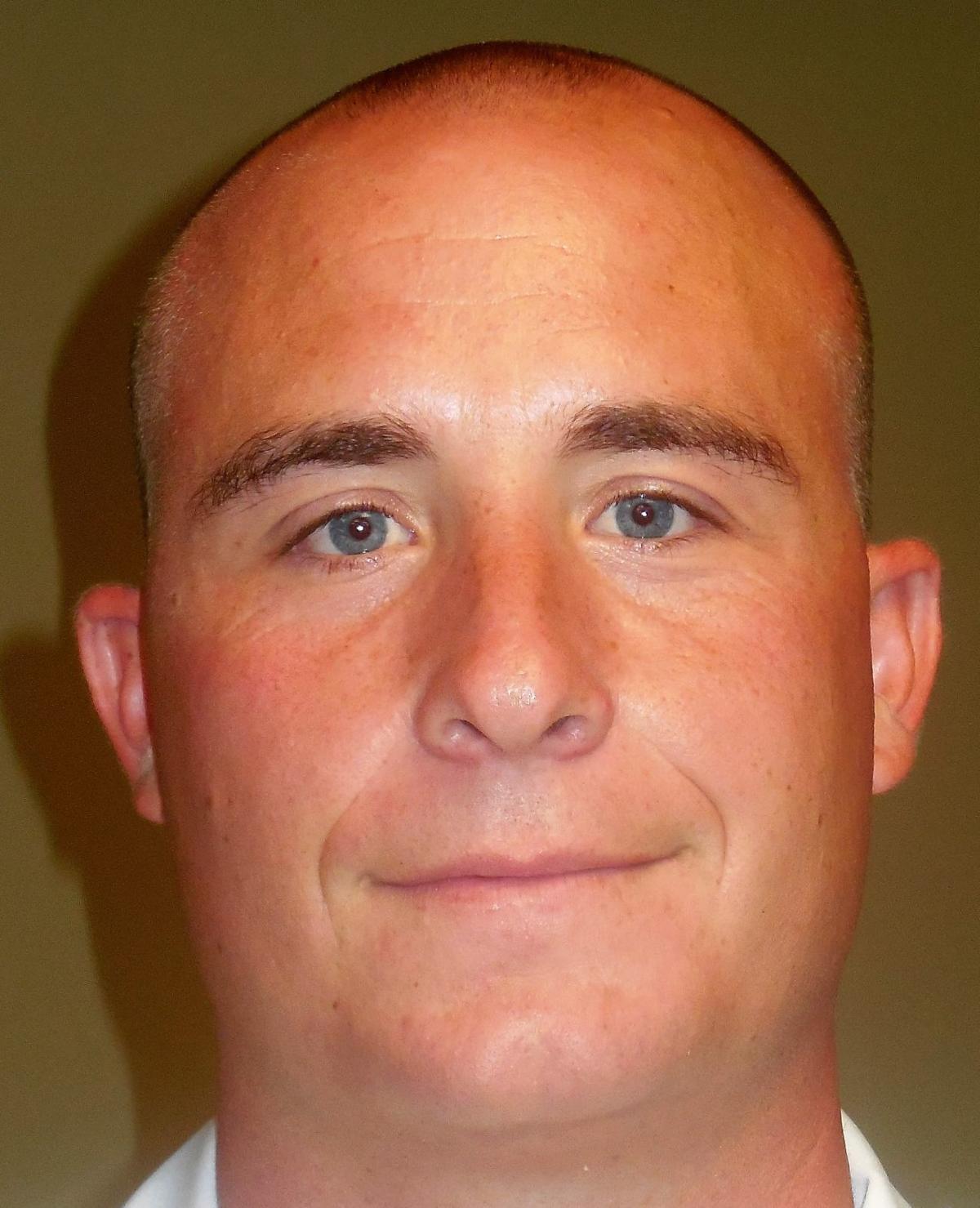 The Caddo-Midway Fire and Rescue District operates on $65,000 annually with $38,500 coming from the property tax fire fee and the other money coming from grants and fundraisers, said administrative chief Darwin Clark. [MICHAEL WETZEL/DECATUR DAILY]

This is the last in a package of stories running on consecutive Sundays on the challenges faced by volunteer fire departments.

While volunteer fire departments in Lawrence and Limestone counties are struggling to survive with fire protection fees set nearly three decades ago, the millage received by Morgan County departments has left them comparatively healthy.

Lawrence and Limestone counties have each lost a department in recent years and more could follow.

Darwin Clark, the administrative chief at Caddo-Midway Fire and Rescue in Lawrence County and former fire chief in Decatur, said in the next decade there will likely be fewer volunteer fire departments because funding is inadequate to cover some departments' operational expenses, especially those in rural areas that don't receive monies from their municipalities.

The closures will put more strain on the dwindling number of volunteers from the surrounding departments, more wear and tear on vehicles and, most importantly, slower response times because of increased coverage areas.

A couple of years ago, Limestone County lost a volunteer fire department at Belle Mina in the southern part of the county because of falling personnel numbers and financial support.

Derrick Gatlin, of Athens, the first vice president of the Alabama Association of Volunteer Fire Departments, said the county is working to get it reestablished. He said Segers VFD plans to use it as a substation in the meantime.

Limestone County’s 12 departments split the $30 fire protection fee added to each homeowner's property tax. Gatlin said it comes to about $40,000 a year per department.

Moulton Fire Chief Ryan Jolly, who oversees a combination department made up of about five paid firefighters and about 15 volunteers, said half of the $25 fire fee is distributed to departments based on jurisdiction size with the other half distributed equally to each volunteer fire department.

North Courtland’s volunteer fire department went dormant two years ago because of poor financial recordkeeping and lack of community support, county officials said. North Courtland Mayor Riely Evans said the town is searching for ways to bring it back. In the meantime, Courtland VFD is using the 4-year-old firehouse behind the North Courtland Town Hall as a substation.

In Morgan County, homeowners pay a 3 mill tax for fire protection, or $3 per $1,000 of assessed value. As property values increase, so does revenue for the volunteer fire departments.

The Morgan County volunteer departments each receive about $100,000 annually, according to John Stinson, president of the Morgan County Association of Volunteer Fire Departments. Each Morgan volunteer fire department could get about an additional $820 annually from the online sales tax collection if Morgan County school districts win a lawsuit against the Morgan County Commission, which kept the money until a local law took effect in October and now is placing the funds in a court-supervised account until the litigation resolves. The $820 total is based on collections during the 2019 calendar year.

The Morgan County Commission spends $36,000 a year for workers' compensation insurance for the volunteer firefighters. The money comes out of the appropriations account of the general fund, Commission Chairman Ray Long said.

The department chiefs say the rising costs of turnout gear (the jacket, pants, boots, gloves, helmets and air packs firemen wear at a scene), fuel, tires and repairs for trucks and emergency medical training exhaust department budgets, leaving little or no money for other expenses.

“When we have a $3,500 brake job on a truck, we just have to park it until we can scrape up the money,” said Clark. "Almost every department in the county has had to idle a piece of equipment or truck to wait on funds to make repairs."

Clark said the Caddo-Midway Fire and Rescue District operates on $65,000 annually with $38,500 coming from the property tax fire fee and the other money coming from grants and fundraisers.

He said the HVAC unit went out at Station No. 1 and a Tennessee Valley Authority grant of $9,800 helped pay for the repair. Another grant paid $3,100 for air bags and improved lighting on trucks.

“If it wasn’t for grants, we would really be hurting in Lawrence County,” he said. “We don’t have a spare hose. We have no extra equipment at Caddo. This happens to every fire department in the county.”

He said the financial constraints mean his department has to purchase the basic 50-foot section of a fire hose for $180. “Wouldn’t you want your firefighters to have the best hose, best equipment available? Instead, we are buying stuff off eBay and trying to get donations from other fire departments to maintain our response readiness.”

“We have fundraisers but we’re competing against other organizations also needing money,” he said. “The dollar can only be stretched so far.”

Clark said it is frustrating to pay more for 911 fees than for fire protection.

“I pay $25 for fire protection on my property tax each year, and I’m paying over $111 a year on 911 fees,” Clark said. “We’re operating on the same budget from 25 years ago. But everything costs more now.”

In the nearby community of Chalybeate, Capt. Jonas Hobbs of the volunteer fire department there said dealing with money woes dampens the enthusiasm of some firefighters.

“Financing the department has been a struggle,” Hobbs said. “You have truck payments, equipment upkeep, training costs. We have to prioritize our budget. Some things we need but the funding is not there. Yes, we struggle to get by.”

State Rep. Proncey Robertson, R-Mount Hope, said Lawrence County has some TVA in-lieu-of-tax money that is available for the upgrading of fire equipment.

“I encourage fire departments that have a need for under $10,000 to apply for one of those grants,” he said. “The county tries to be fair across the board distributing out the money.”

He said counties fund their volunteer fire departments differently and it is probably best handled at the county and local levels.

“Homeowners and residents should understand the importance of a strong volunteer fire department,” Robertson said. “The services they offer affect homeowners insurance — better the rank, the lower the insurance price."

“Most of our volunteer fire departments are woefully underfunded,” he added. “The most dedicated first responders are volunteer firefighters. They’re the true heroes. They’re risking their lives for free.”

Jolly said the county and Legislature could help solve the dilemma but because it involves asking for money, they shy away.

“Everyone wants to help, but when you bring up the word 'money,' it’s like they saw a ghost. They all of sudden shut down,” Jolly said.

He lauded recent action by the Lawrence County Commission and Revenue Commissioner Brad Henderson for attempting to collect fire protection fees that have been overlooked in past years.

“They are addressing the mobile home fees now,” he said. “It’s not a new tax or anything. It is a service fee that has been on the book for decades and hasn’t been collected for whatever reason. It’s tens of thousands of uncollected tax money.”

“A strong fire service, whether it be a volunteer, career or combination department, has a positive effect on the community it serves,” he said. “Each county funds their departments. There are 67 county fire associations in the state. Some volunteer departments are very limited in funding and some are very well funded. In the long run, a strong department saves communities money.”

Stinson said the 3 mill fire fee and a small percentage of sales tax in Morgan County pumps enough money into the county’s volunteer fire departments to make them viable.

He said the Somerville Area Volunteer Emergency Services (SAVES), with fundraisers and grants, operates on about $115,000 annually.

“We have to be very smart and thrifty with our money,” he said. “The volunteers take money out of their own pockets driving to a fire, taking training classes.”

SAVES Chief Thomas Staggs  said the life of turnout gear is about 10 years.

“I applaud the people of Morgan County,” he said. “They didn’t set a dollar amount (like Limestone and Lawrence counties). The more money the county received, the more money we received. We make do with what we receive.”

The expected influx of new Morgan County residents from the Mazda Toyota Manufacturing USA plant under construction in neighboring Limestone County should generate more property tax money for developed tracts and therefore more fire protection fees for fire departments. But there is a downside.

The stronger a volunteer fire department is, the lower home insurance premiums in that area …

Ironic that the Volunteer Fire Departments get to benefit from the 3% mill tax and the Morgan County Rescue Squad gets ZERO . . . . even though their coverage area is the entire county.

I hate to be a critic of some volunteer departments. But those that have a "fire chief" vehicle that is used for personal business and driving to and from their jobs gives me little sympathy for the lack of operating funds. You can see them daily in Decatur and they are not just from Morgan County. Again, it is not all volunteer departments, but for those that do operation funds must be in good supply, or at least let's hope it is.