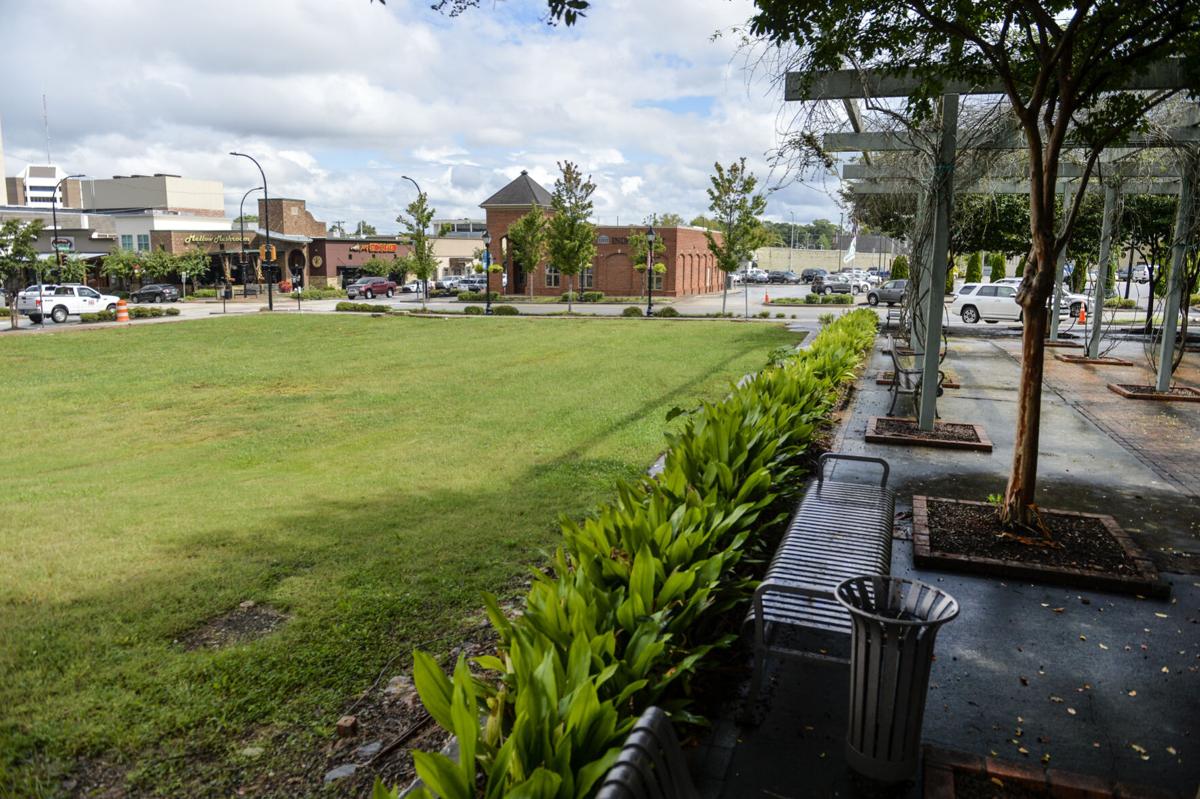 Property on the southwest corner of East Moulton Street and Second Avenue will become the site of a planned Fairfield Inn by Marriott hotel. Pending city approval, Jones Park, at right, also will be used for the hotel. [JERONIMO NISA/DECATUR DAILY] 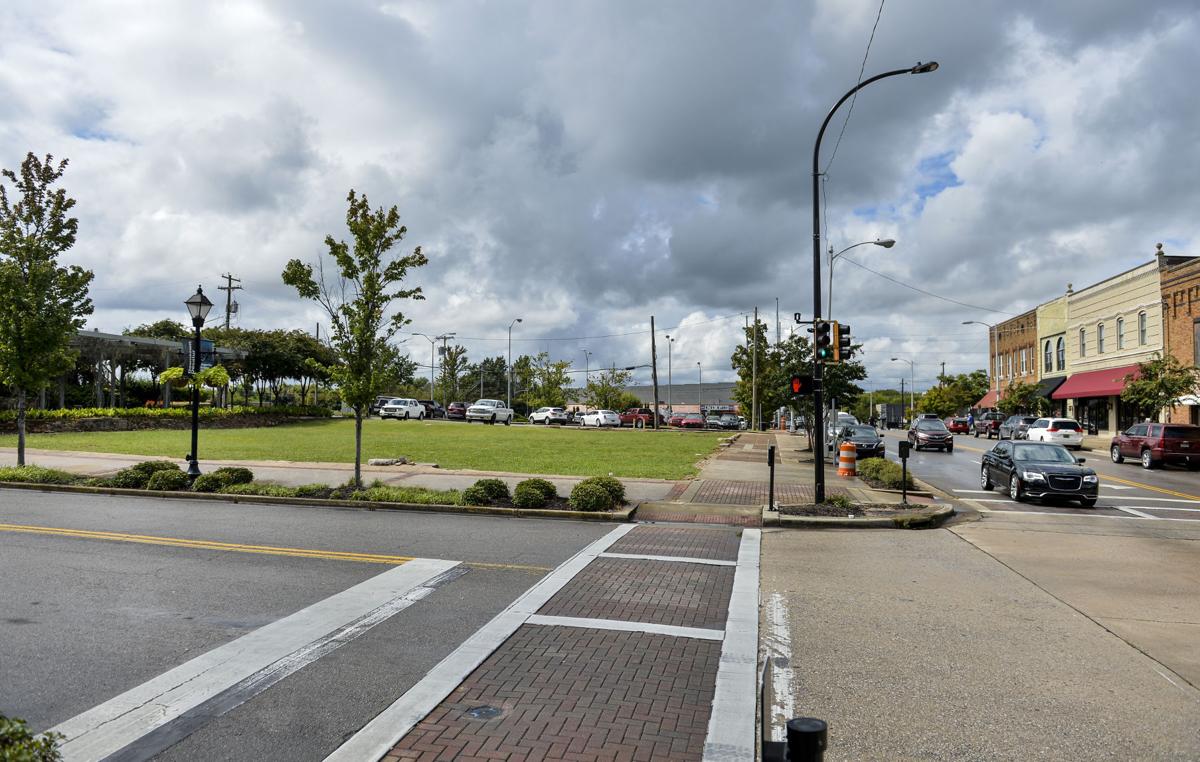 The view looking west of the site for a planned Fairfield Inn by Marriott hotel. [JERONIMO NISA/DECATUR DAILY]

Property on the southwest corner of East Moulton Street and Second Avenue will become the site of a planned Fairfield Inn by Marriott hotel. Pending city approval, Jones Park, at right, also will be used for the hotel. [JERONIMO NISA/DECATUR DAILY]

The view looking west of the site for a planned Fairfield Inn by Marriott hotel. [JERONIMO NISA/DECATUR DAILY]

The “heart of downtown Decatur” — the corner of Moulton Street and Second Avenue Southeast — will soon be the site of an 80-room Fairfield Inn by Marriott, Mayor Tab Bowling said Monday.

The hotel will be developed by Jack Fite of Fite Building Co. in Decatur, Chris Chavis of Opelika-based PHD Hotels, and H.M. Nowlin. The hotel will be built on property owned by Nowlin Development Co. and on an adjoining city-owned park and possibly the alley, the mayor said. The property is on the southwest corner of the intersection, where C.F. Penn Hamburgers and other businesses were formerly located.

Nowlin said he is a partner with Fite and Chavis in the deal. He said Chavis will be leading the project with Fite's company building the hotel.

"I will be providing the land and some additional investment," Nowlin said.

Details such as an architectural rendering and plans for parking were not available Monday, but Bowling said he expects construction of the hotel to be complete in about 16 months.

“It’s a perfect location,” Bowling said. “A hotel should bring even more businesses and restaurants downtown.”

“This definitely helps the rejuvenation of downtown Decatur that we’ve seen in the last 10 to 15 years,” McMasters said. “A vibrant downtown is a barometer of the city, and this shows how well the city is doing.”

Rick Paler, executive director of the Decatur Downtown Redevelopment Authority, call the hotel a “game-changer,” especially since it replaces a 3-year-old hole at the center of downtown.

Nowlin closed the 14,000-square-foot building at the site after it was damaged in a powerful April 3, 2018, storm that caused damage throughout the city. C.F. Penn Hamburgers and Downtown Dawgs moved from Nowlin's building to Sixth Avenue locations.

The Nowlin building sat empty for eight months until he had it demolished in January 2019. Nowlin said insurance delays allowed the building, which didn't have a roof, to deteriorate to the point that he had to tear it down. The property remains vacant.

"I never wanted to demolish the building but I had no choice," Nowlin said Monday.

Paler said the empty lot provided options as officials looked for a possible replacement “because there was an opportunity to start from scratch.”

Nowlin said he "could have sold the property a dozen times" but those offers didn't make sense for him or downtown. He said he was looking for a deal in which he could also be a partner.

"This is an opportunity that in a sense will breathe new life into downtown," Nowlin said.

This will be the second hotel that PHD will build in the city. Fite and Chavis built Home2 Suites by Hilton at Ingalls Harbor, sold it, and are now using sale profits to build the downtown hotel, Bowling said.

“Our Home2 Suites was one of the top producers in the chain,” Bowling said. “And then someone knocked on their door and purchased it from them. I’m very thankful for their willingness to reinvest in Decatur.”

PHD Hotels on its website lists several Alabama Home2 Suites hotels in its portfolio and one in Georgia, as well as a Hilton Garden Inn in Madison.

Councilman Kyle Pyke, whose District 2 includes downtown, called the new hotel “a big-ticket item that neatly fills a big gap. This will put more eyes (on Decatur) from developers and investors.”

Paler and Nowlin expect a new downtown hotel will become a magnet for new businesses while providing existing businesses with more customers. The hotel will be next door to the Alabama Center for the Arts dormitory planned for Johnston Street Southeast.

“There will be a lot more hungry people downtown,” Paler said.

The hotel will also support the Cook Museum of Natural Science, the Princess Theatre Center for the Performing Arts and the city’s various downtown activities, Paler added.

Paler said the mayor and City Council members worked hard to bring the hotel to the city.

They agreed to give up the city-owned pocket park named after Glenna Jones and her late husband, Ralph. This adds 0.16 of an acre to the project. Nowlin said they may want the alley too, but that hasn't been determined. The City Council would have to vote on conveying the property.

“We’re really thankful that the family was willing to sacrifice this park for this special project,” Bowling said. “We will do our best to rename another park in honor of the Joneses, who have served this city so well.”

My firm, 2b Design Studio of Huntsville, AL will be the Architect for the project. It will be my second hotel project in Decatur, the first being the Home2 Suites at Ingalls Harbor. To answer the question about parking, there will be an adjacent parking deck constructed to not only provide parking for hotel guests, but also general parking for those working downtown or visiting downtown businesses.

And where will people park??

We have so many hotels already. I would much rather have this area remain a park.