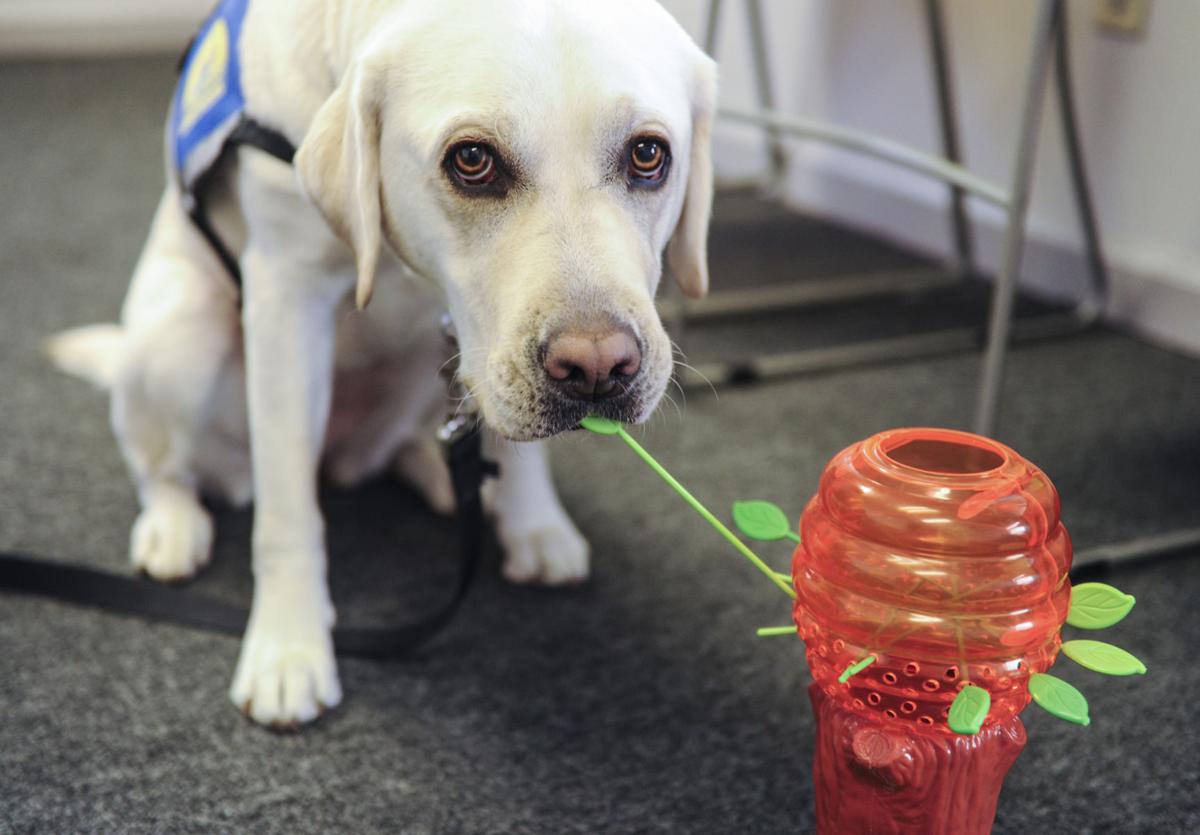 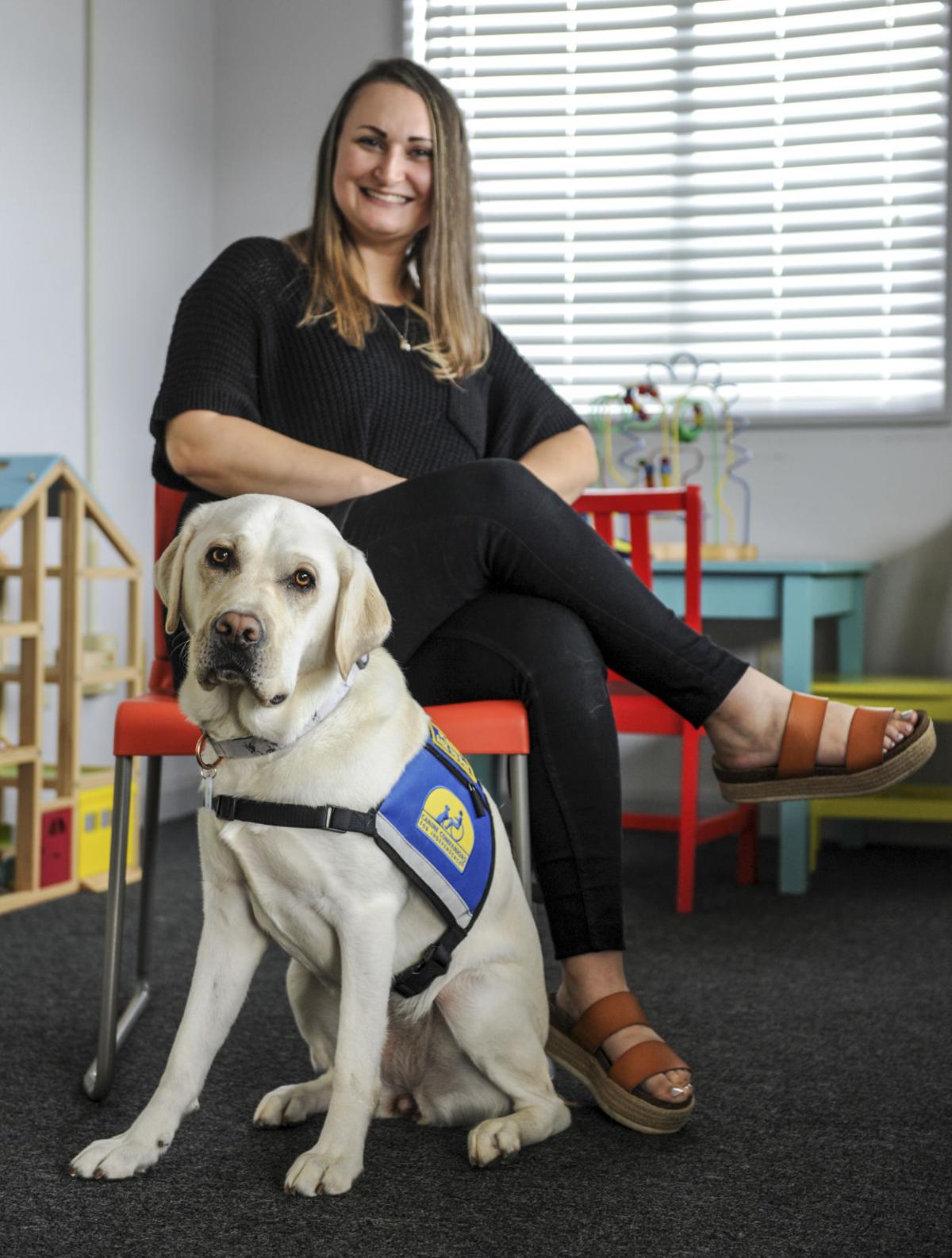 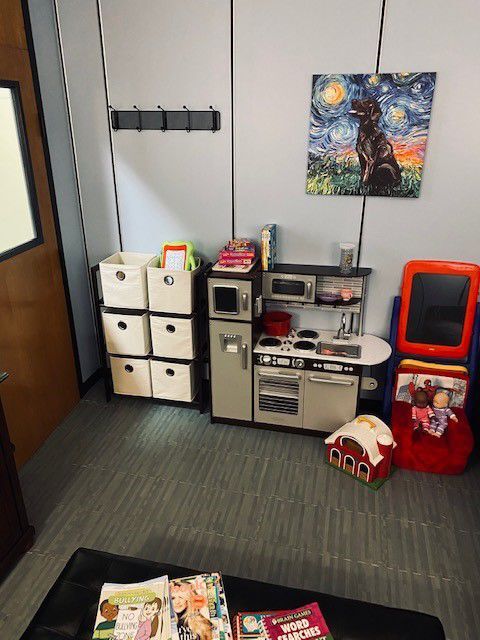 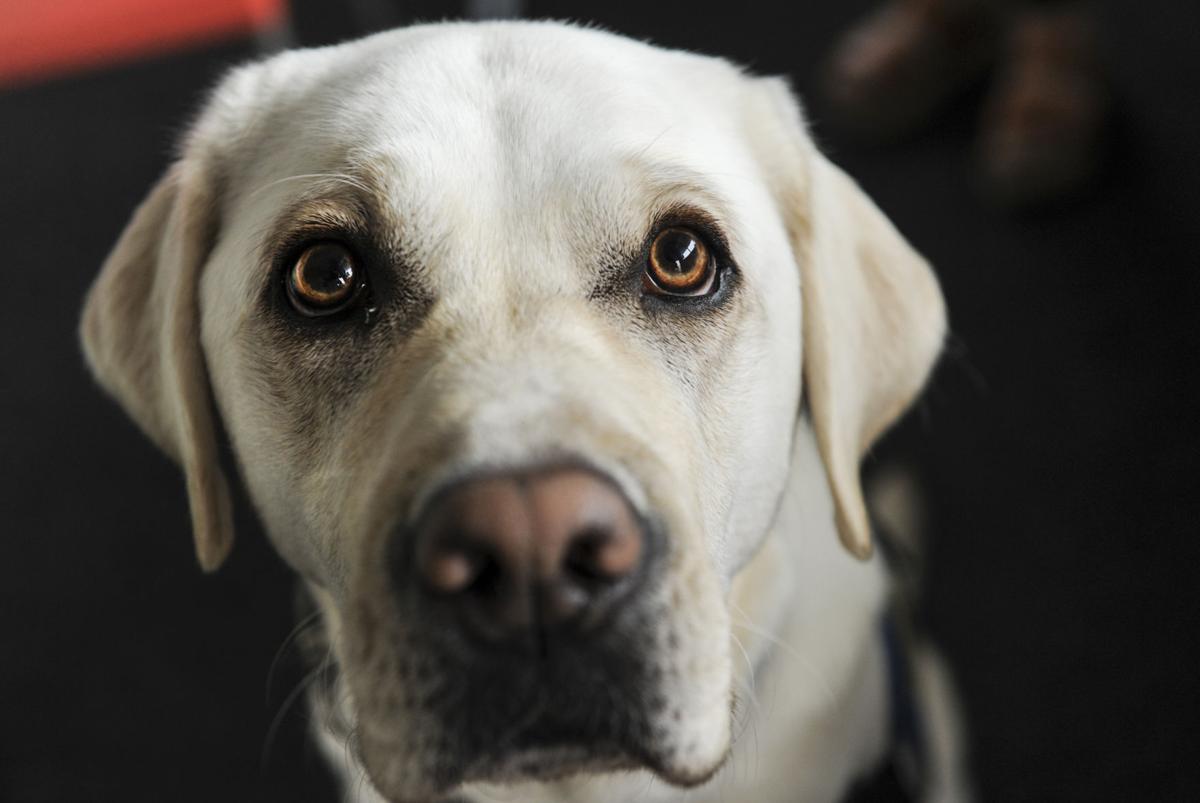 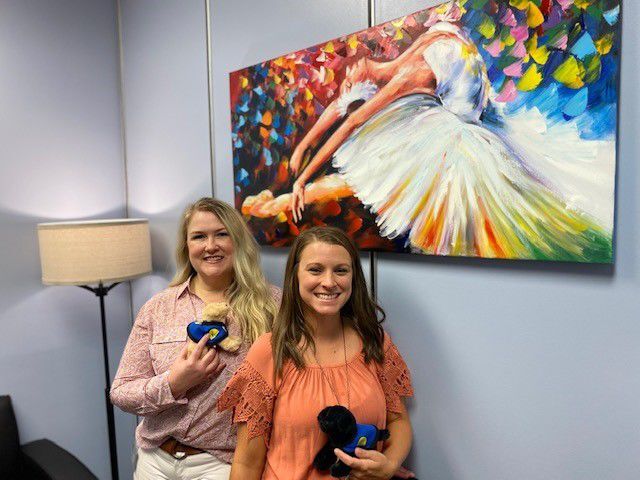 Hesitantly, 2-year-old Jezebel inched to the children’s game sitting on the floor of the Morgan County Child Advocacy Center.

“Your turn, Jezzy. Come on. You can do it,” Misty Cowger encouraged.

Slowly, Jezebel grasped a green plastic stick in her mouth and pulled the piece from the game.

For the past four months, Jezebel, a facility dog, has assisted the victim advocates at the Decatur-based Child Advocacy Center by playing games and spending time with the children.

“We aren’t really the place children want to be. Jezebel helps the kids open up and relax. Even the teenagers are excited to see her,” said Cowger, the lead victim advocate and forensic interviewer.

Founded in 2006, the Morgan County Child Advocacy Center provides help to victims of physical, mental, verbal, emotional and sexual abuse by serving as advocates for them, providing trauma-focused therapy and overseeing forensic interviews. Last year, the center served 786 children and their families.

“The last couple of years, we have seen that number rise. The statistics show that one in 10 kids will be abused by the time they are 18,” Cowger said. “They are the reason Jezebel is here. Jezebel helps empower the children and gives them a voice. Dogs have the power to comfort and provide companionship, even during the darkest days.”

The center’s journey to securing a facility dog began two years ago after Susan Goggins learned of the impact of canines on child agencies while attending the National Child Abuse Symposium in Huntsville.

“I heard stories about how the dogs made children feel comforted, supported and safe,” said Goggins, executive director of the Morgan County Child Advocacy Center. “At one session all the dogs were there. I sat surrounded by a bunch of Labrador retrievers and realized how much we needed this. You can’t be around these dogs without feeling a little bit better.”

To receive a facility dog, the Child Advocacy Center filled out a written application and underwent phone and in-person interviews. In March, the center received the call to come to training at the Canine Companions’ Southeast Regional Training Center in Orlando.

“When I got down there, they pulled dogs that they thought would match well for us. They select a dog based on what’s best for the dog’s personality, my personality and the facility,” said Cowger, who serves as Jezebel’s handler. “They chose Jezebel.”

As the Child Advocacy Center’s journey was beginning two years ago, so was Jezebel’s.

From birth, Jezebel — or Jez and Jezzy as she’s also called — began training for her role as an assistance dog with Canine Companions for Independence, a nonprofit that breeds and trains facility and service dogs.

As a puppy, trainers got her accustomed to loud noises by playing sirens while she ate. From eight weeks to 18 months, Jezebel stayed with a puppy raiser and learned 40 commands, such as “don’t,” “tug,” “wave,” “get” and “jump.” After 18 months, Jezebel, a cross between a Labrador and golden retriever, started professional training at Canine Companions. There, trainers determine whether the animals will serve as facility dogs or therapy dogs.

“Therapy dogs are there to hang out and comfort you. Facility dogs provide comfort too, but they are also trained to do tasks,” Cowger said. “I have been able to build on Jezzy’s 40 commands and tailor them for our children.”

During a typical day Jezebel, who works 20 hours a week, spends time with children before and after forensic interviews and sits with them during therapy sessions.

“I have to watch her body language. She’ll let me know when she’s done for the day. She’ll put herself in her kennel when she’s tired,” Cowger said.

Before bringing Jezebel out, Cowger asks the children if they suffer from allergies or are afraid of dogs. As of today, every child desired to spend time with Jezebel. One child specifically stands out.

He sat in the office silent with his arms crossed. After asking whether he would like to meet the center’s dog, Cowger introduced him to Jezebel.

“She laid on the floor and, before I knew it, he had gotten on the floor with her. He touched her real quick. She turned and put her paw on him. When he left, he was a different child and was talking to everyone,” Cowger said. “I know she’s just a dog, but she really laid that path for him to feel safe and tell what he needed to tell.”

Since arriving at the Child Advocacy Center, Jezebel has visited the Kiwanis Club, the Decatur City Council and the witness stand at the Morgan County Courthouse. Because of Willow’s Law, which the Alabama Legislature passed in 2017, Jezebel, as a facility dog, can sit in the witness stand with children when they testify.

“Alabama was the first state in the country to have a law that says victims are allowed to have a certified facility dog with them when they testify. Right now, Alabama has 12 of these dogs,” Cowger said. “We haven’t been called for court yet, but we expect her to be. She is trained to be a calming presence for traumatized victims and will lay at their feet.”

Morgan County District Attorney Scott Anderson, who also serves as a board member for the Morgan County Child Advocacy Center, stressed the importance of allowing Jezebel in the courtroom.

“A courtroom can be a very intimidating place. I can’t imagine being a child and being required to sit and face my abuser, as well as 12 adult strangers serving on a jury, and having to tell them about the worst day in my life,” Anderson said. “I have no doubt that Jezebel will serve to empower these children to feel a little more at ease as they endure this process.”

Anderson learned about facility dogs when the Alabama District Attorney’s Association and the Office of Prosecution Services initiated the program several years ago.

“I learned how useful these dogs can be in comforting and encouraging abused children so that they are better able to tell examiners of the (Child Advocacy Center) the details of any abuse they may have suffered,” Anderson said.

“Seeing Jezebel with the kids and knowing what a difference she will make in court reminds us why we started this process,” Cowger said.

Operating primarily on donations, Canine Companions provided Jezebel to the Child Advocacy Center at no charge. The center’s only costs included traveling expenses to Orlando for training and to the in-person interview in California. The center also covers Jezebel’s current upkeep. Once Jezebel retires — a typical facility dog works six years — Cowger, who will become the center's executive director in October following Goggins' retirement, will have the option of adopting her from Canine Companions.

Each day, Jezebel’s impact on the community expands. Pictures of Jezebel created by children hang on the wall at the Child Advocacy Center. The center also hands out mini stuffed dogs, complete with the blue Comfort Companions vest Jezebel wears.

“We just feel so lucky to have Jezebel here,” Goggins said. “Jezebel provides unconditional love and attention to children who need it most. She’s like our little miracle worker.”

The most common questions Misty Cowger fields about Jezebel concern her name.

“I have ‘Jezzy’ on her tag because that is easier for kids, but when I call her by her full name, the questions start coming,” Cowger said.

With the birth of a new breed of puppies, Canine Companions assigns the breed a letter. Jezebel’s breed received the letter “J.” The names must begin with that letter and can’t repeat the names of dogs currently working for Canine Companions.

“We didn’t name Jezebel. A breeder decided on her name and that’s who we got,” Cowger said.

You should know as well or better that Jezebel is not "just a dog". She has already shown how valuable she is to the mental health of traumatized children. She has shown her intelligence and stamina by completeing an extensive training program to be able to serve in this capacity. Please give her -- and all dogs -- the respect they deserve.