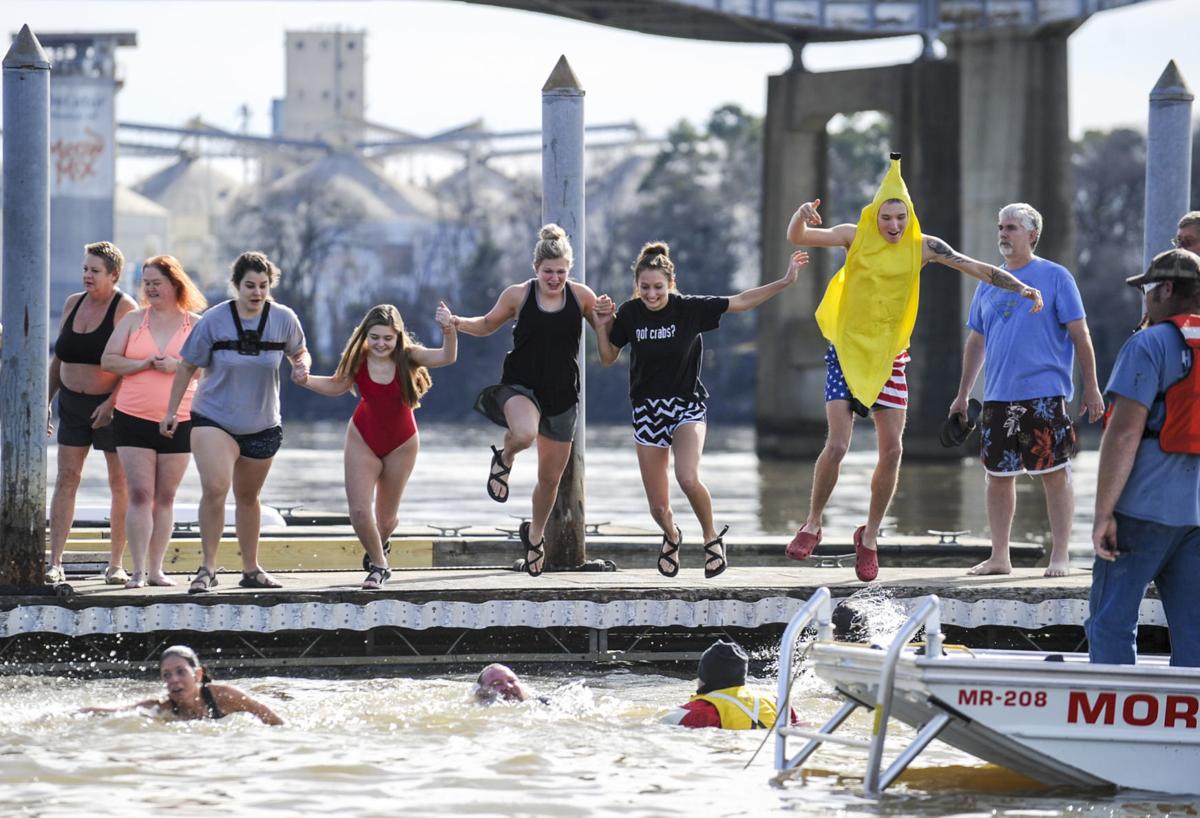 Swimmers jump into the waters of the Tennessee River during the 2020 Polar Bear Plunge at Riverwalk Marina on Wednesday. More photos at decaturdaily.com. [JERONIMO NISA/DECATUR DAILY] 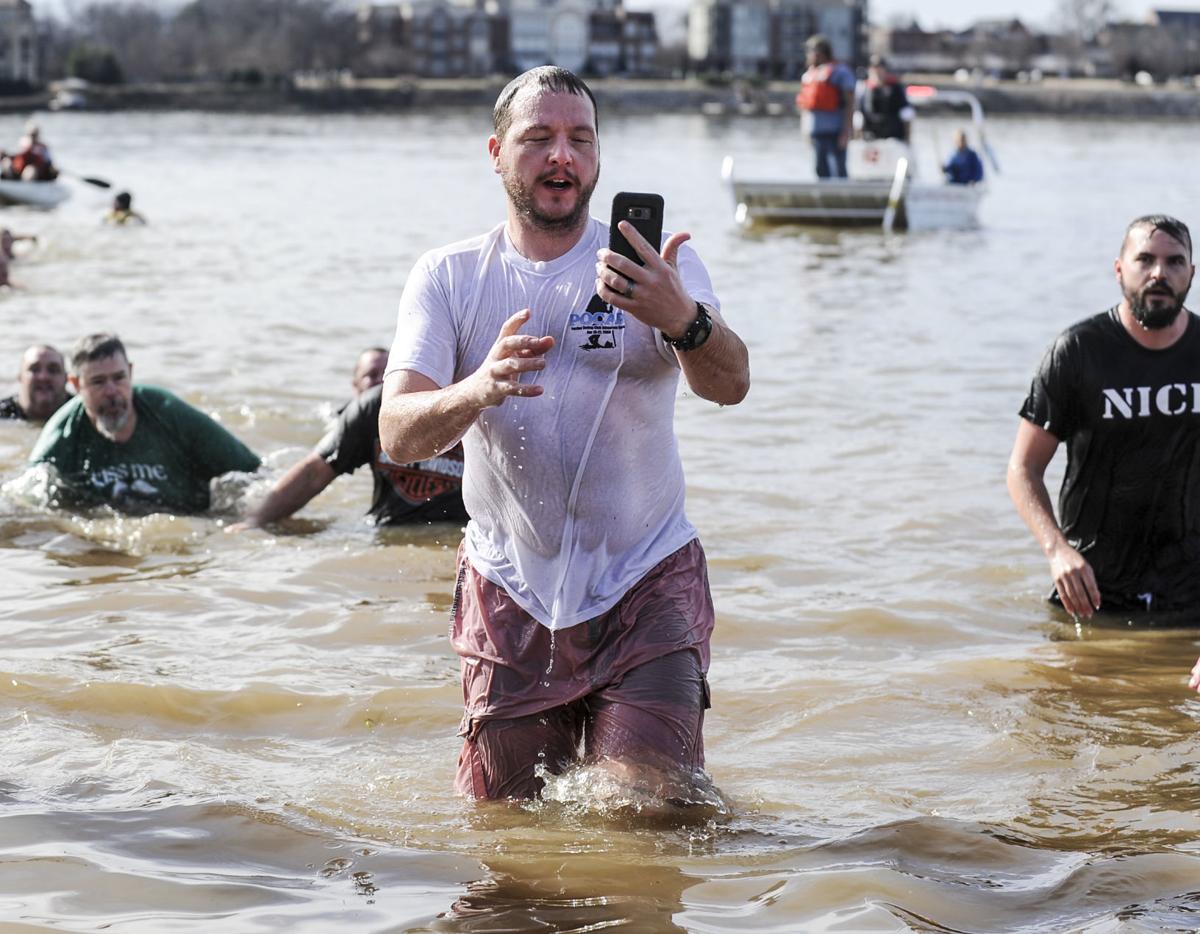 A swimmer takes a selfie as he gets out of the water during the 2020 Polar Bear Plunge at Riverwalk Marina on Wednesday. [JERONIMO NISA/DECATUR DAILY]

Swimmers jump into the waters of the Tennessee River during the 2020 Polar Bear Plunge at Riverwalk Marina on Wednesday. More photos at decaturdaily.com. [JERONIMO NISA/DECATUR DAILY]

A swimmer takes a selfie as he gets out of the water during the 2020 Polar Bear Plunge at Riverwalk Marina on Wednesday. [JERONIMO NISA/DECATUR DAILY]

Penny Taylor of Decatur was one of more than 100 people who jumped in the frigid Tennessee River on Wednesday to welcome in the new year. It was her fourth time taking the annual Jan. 1 Polar Bear Plunge. She said each year the feat doesn’t get easier.

“While the water was very refreshing, it was very frigid,” she said. “It’s a great way to get the year started and to know that you are still alive.”

Jay Shiflet, 50, of Huntsville, coaxed his son James, 15, into taking the leap in the water at the Decatur Marina and Boat Harbor. “I actually expected it to be colder than it was, but it was still cold,” said James, a student at Hazel Green High School. “It was definitely worth coming over here and missing the kickoff of the (Alabama) game.”

Jay said he did a New Year’s Day plunge 35 years ago when he lived in Monroe, Michigan. While it was much colder up north, he said Decatur's water was still quite chilly.

They plan to return next year, possibly with Jay’s wife participating, Jay said.

Originator of the Decatur plunge, Wayne Holliday, 82, had two of his grandchildren, Josephine Holliday, 9, of Chattanooga, and Lewis Holliday, 21, of Colorado, join him making the New Year’s leap.

“The water was cold, very cold,” said Josephine. “It was very hard for me because I had leg cramps when I got in the water. I was thinking I was going to die.”

The Morgan County Rescue Squad assisted her making the 30-yard swim. Ten minutes after completing the distance, she quickly said she doesn’t plan to jump in 2021.

About 15 members of the Morgan County Rescue Squad with flotation devices, a kayak, boat and a swift water diver were on hand to ensure safety of the jumpers. Two other swimmers, ranging from age 12 to 60, were given aid in the water Wednesday, according to squad board member William Szczepanski. “We usually have to assist at least one swimmer every year,” he said. “When you jump into the cold water, your body wants to shut down, and some people aren’t prepared for that. If we help one swimmer, that’s better than one swimmer needing help and nobody there to assist.”

“We’re very pleased with the turnout and sales this year,” she said.

There was no charge to jump.

“I’ll be out here every year my granddaddy is here,” he said. “The weather wasn’t bad this year but the water was still so cold.”

Nearby, Marcus Baker of Athens, was unloading his fishing boat off its trailer. He said he missed seeing the people jump into the water, but wasn’t so sure he wants to begin his new year in the cold Tennessee River.

“I’d have to be really in tune with nature to want to jump into the water, really in tune,” said Baker, 40. “For one thing, I can’t swim and not so sure I’d want to be in that water today.”

He said he was fine settling for a day fishing for anything that wanted to bite his night crawler bait Wednesday afternoon.

Should Decatur implement a ban on parking vehicles in front yards?