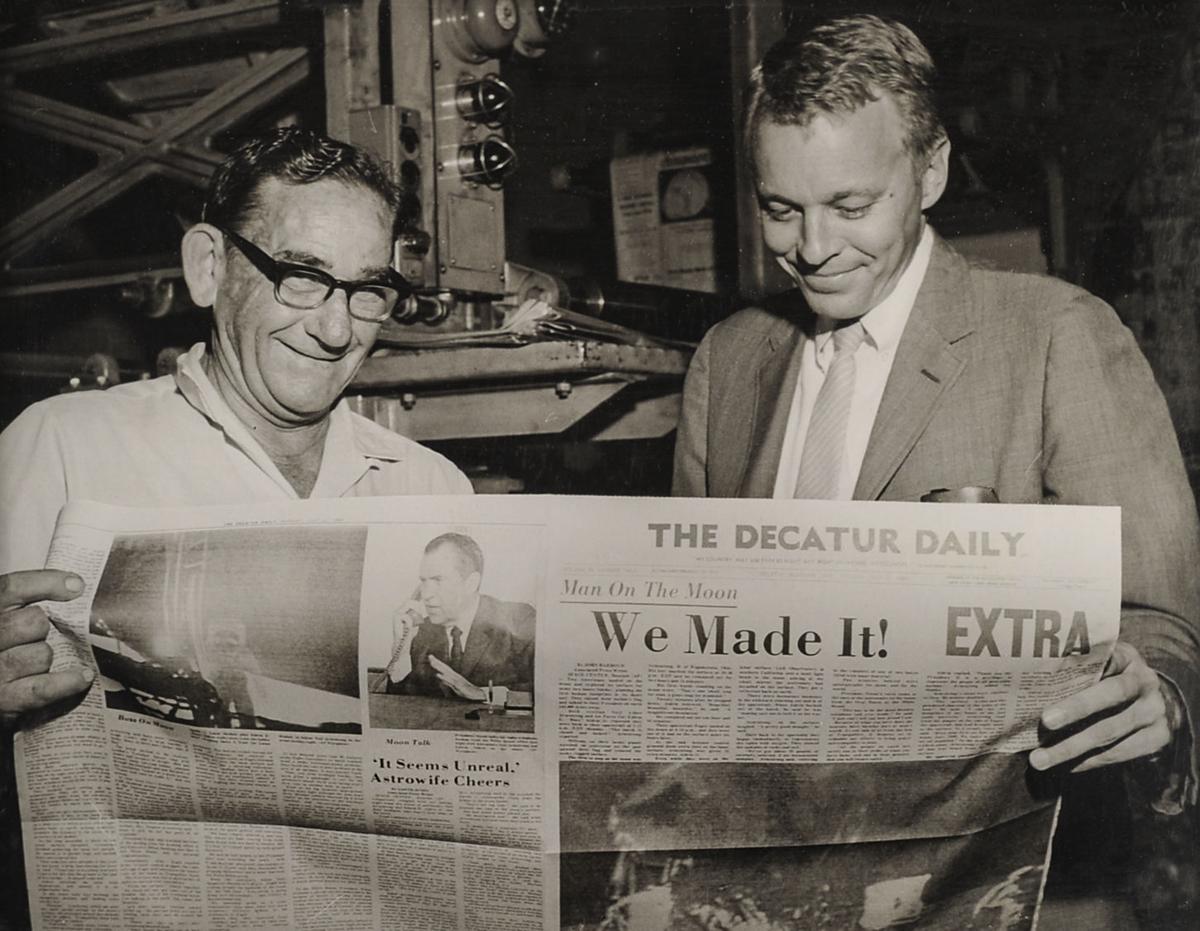 Barrett Shelton Jr., right, in July 1969, with his press operator, reviews a special edition of The Decatur Daily announcing that U.S. astronauts had successfully landed on the moon. [DECATUR DAILY FILE] 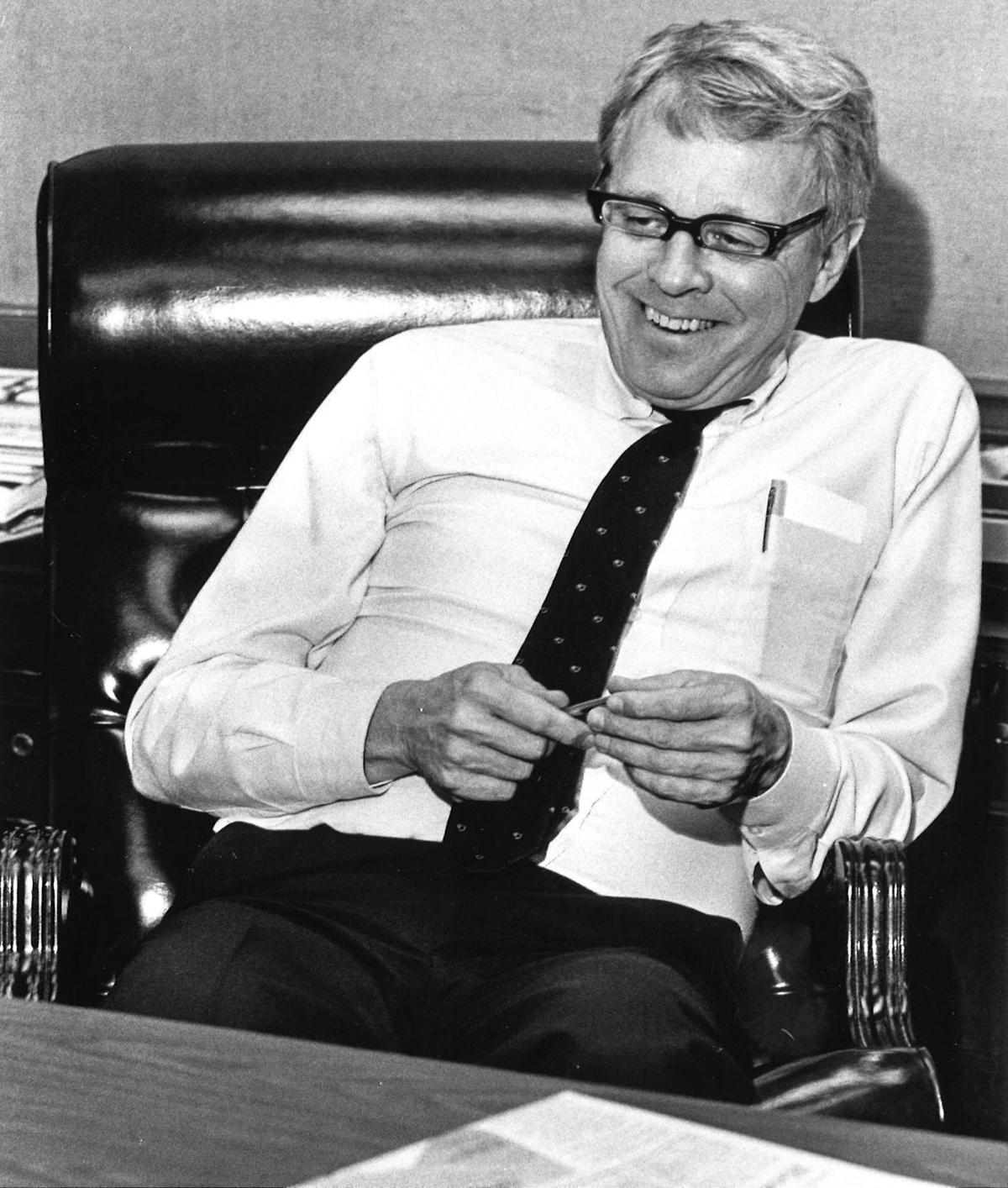 Barrett C. Shelton Jr. was named general manager of The Decatur Daily in 1965 and, after the death of his father in 1984, he became editor and publisher. [DECATUR DAILY FILE] 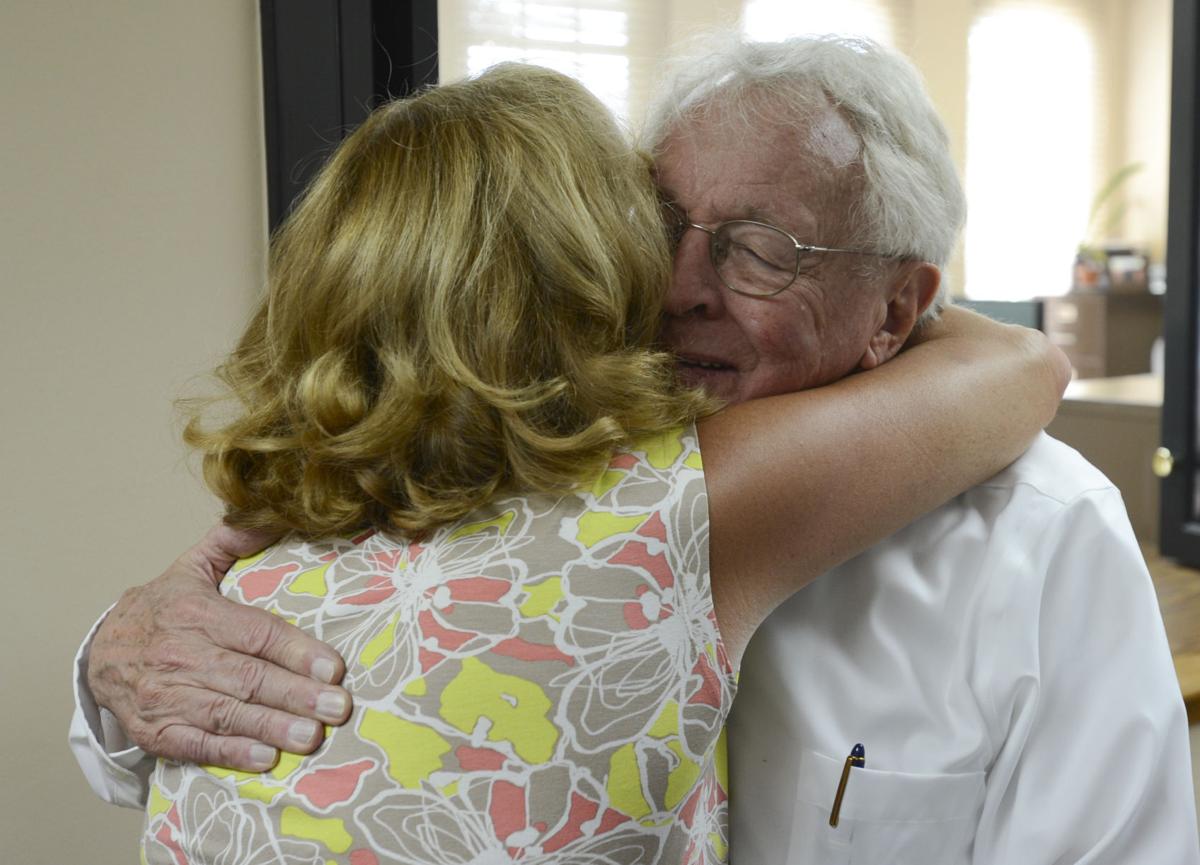 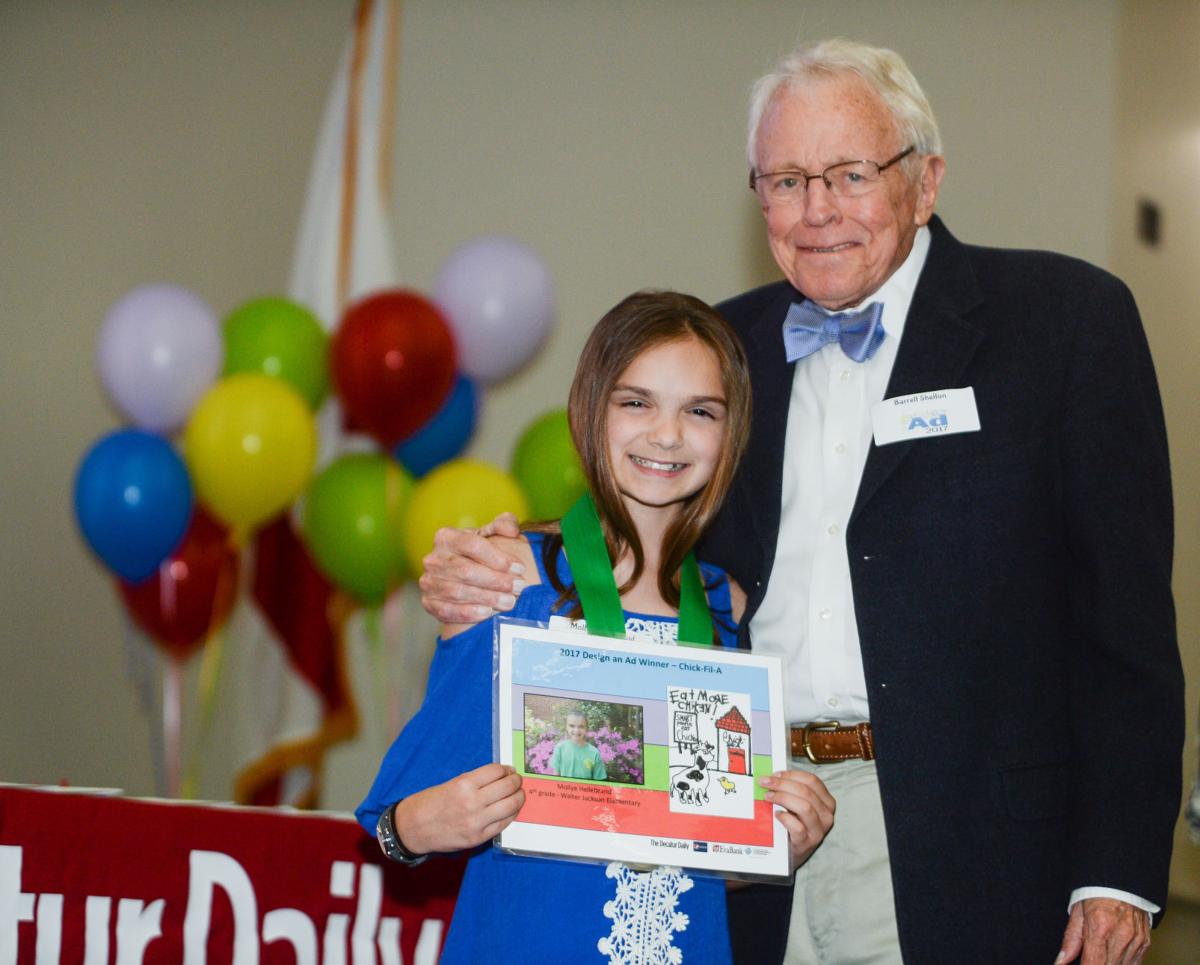 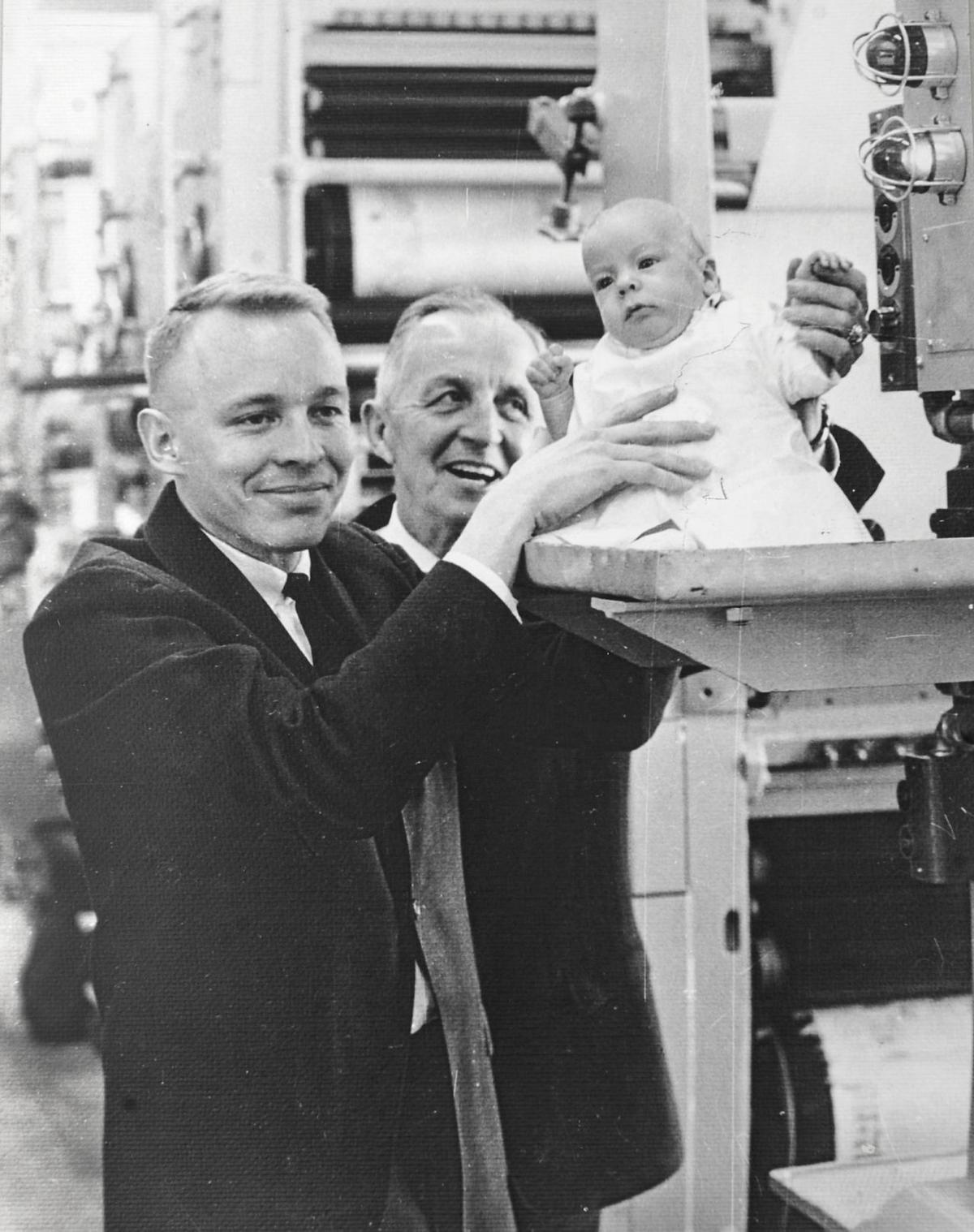 Barrett Shelton Jr., right, in July 1969, with his press operator, reviews a special edition of The Decatur Daily announcing that U.S. astronauts had successfully landed on the moon. [DECATUR DAILY FILE]

Barrett C. Shelton Jr. was named general manager of The Decatur Daily in 1965 and, after the death of his father in 1984, he became editor and publisher. [DECATUR DAILY FILE]

Barrett Shelton Jr. was a hard-nosed newspaperman, loving family man and astute businessman, but those seeking to succinctly describe him invariably focus on his love of the community.

Shelton, who had a distinguished career as a newspaperman and a hand in the growth of Decatur and the Tennessee Valley, died Sunday at his home. He was 89.

He is survived by his second wife, Carolyn, three children, six grandchildren, a sister, two stepchildren and four step-grandchildren.

“There wasn’t a bigger supporter of Decatur and Morgan County than Barrett Shelton,” said Sen. Arthur Orr, R-Decatur. “He did a lot around the community and did it quietly. He was very impactful and very generous.”

Grisham said Shelton and his first wife, Tolly, were two of the first people she met when she moved to Decatur in 1968. They attended church together at First Presbyterian and their friendship grew when the Decatur Morgan Hospital Foundation formed.

Grisham said Shelton was a generous contributor to the campaign and this is why she suggested naming the nursery in honor of him and his three children because all were born at Decatur General, since renamed Decatur Morgan Hospital.

“He said ‘no,’” an emotional Grisham recalled. “He wanted it named in honor of the employees at the hospital. I saw the fun side of Barrett, but I also saw the caring side.”

Shelton was known publicly because of his association with The Decatur Daily and his many roles at the newspaper, but his footprint is all over the Tennessee Valley.

“He was very knowledgeable about most everything, and cooperative,” said Nix, who with Shelton was a partner in the Burningtree Valley Estate development.

Shelton was also helpful in the development of Mallard Fox Creek Industrial Park and its port and in attracting a new generation of employers to the Decatur area, including Daikin America and what is now Nucor Steel.

His first love, however, was newspapers, and he believed in the paper’s role as a watchdog over government and in exposing inefficiency and corruption.

“The daily newspaper is concerned with everything and everybody in the community it serves, the good and the bad, the rich and the poor,” Shelton said in 2006.

Under his leadership, The Daily won hundreds of awards, including honors for community service, freedom of information and general excellence.

Wright, who led The Daily’s newsroom for more than 30 years, said Shelton was an editor’s dream.

“He had a lot of friends, some of them longtime friends, but this didn’t stop him from letting us do what was right and report the news,” Wright said. “There were times when he went against his friends, but he always told us to get the story right and get both sides of the story.”

Dan David, formerly of First American Bank, recalls coming to his friend Shelton to plead that The Daily delay running a story. After he had made the 10-minute pitch, he got a two-second response: "Mr. David, that is the news and we print the news."

“He was family, newspaper and community,” Wright said. “He was just like his father and used the newspaper to make Decatur a better place.”

Wright’s wife, Regina, was an editor at The Daily and she spent many hours in Shelton’s office explaining stories.

“One of his favorite sayings was ‘you have stirred them up,’” she said. “He loved the industry and his blood was black ink.”

Shelton grew up in the newspaper industry, working first in The Daily’s mailroom and as a carrier on a Line and Ferry streets route. After learning to type, he worked as a reporter before graduating from Decatur High. During his senior year in 1949, he was the newspaper’s sports editor.

After graduating high school, Shelton spent a year at Washington and Lee University, but he earned his college degree from the University of Alabama.

Shelton supervised stories from Morgan, Lawrence, Limestone and Cullman counties before being named managing editor of The Daily in 1958. He also married his first wife, Georgia Tolly Gilmer, in 1958.

In 1965, he was named general manager of the family-owned paper, and after the death of his father in 1984, he became editor and publisher.

“I came along after Decatur had a good, sound economic start and I hope that I’ve been a help,” Shelton said in a 2006 interview.

No matter what role he served, Regina Wright said Shelton never lost his love for the newsroom. He would amble in every day and spend a half hour reading various newspapers. She remembers a new reporter asking, "Who is that man who walks around like he owns the place?" to which she quipped, "The man who owns the place."

In 2010, Shelton retired and passed the torch to his son, Clint, who is the fourth Shelton to serve as publisher of the newspaper.

When The Daily celebrated its 100th birthday in 2012, Barrett Shelton reflected on some of the biggest headlines to ever appear in the newspaper and reluctantly accepted credit for his role in them.

In 1969, for example, when he was on vacation in Florida with his family, he decided to “take the edge off” television’s coverage of America’s flight to the moon.

He flew back to Decatur on a Sunday and went to work on a special edition as the spacecraft carrying Neil Armstrong and Edwin “Buzz” Aldrin orbited the moon.

One day after the astronauts explored the moon’s surface on July 20, 1969, The Daily’s front page had one story, a large photo and a headline that read: “Man On the Moon — We Made It!”

“We’ve always tried to go the extra mile to make sure our readers got the story first,” Shelton said in 2012.

“Barrett was not only a boss, he was a friend and made you feel like family,” Tom Wright said. “He traveled the extra mile for so many in Decatur.”