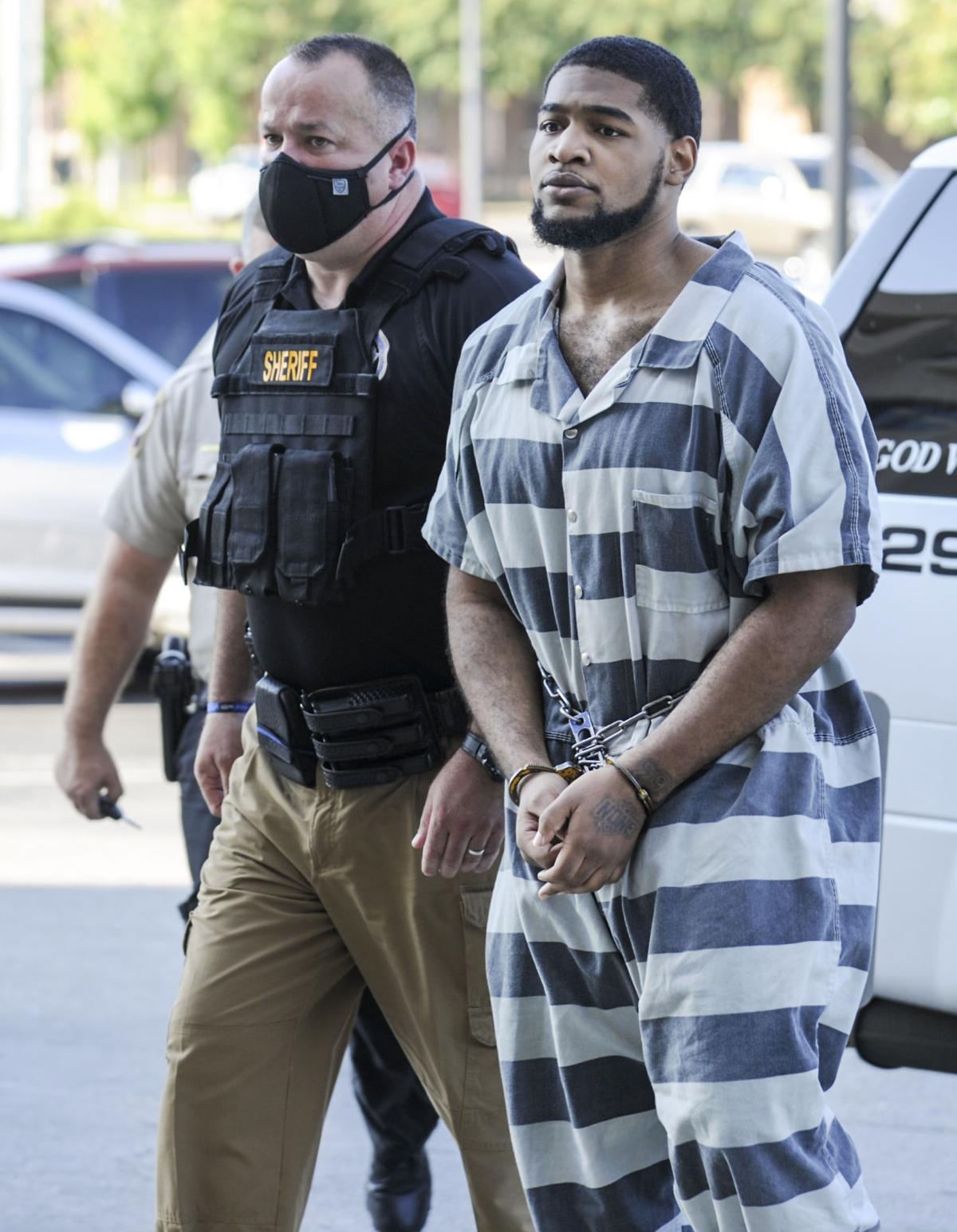 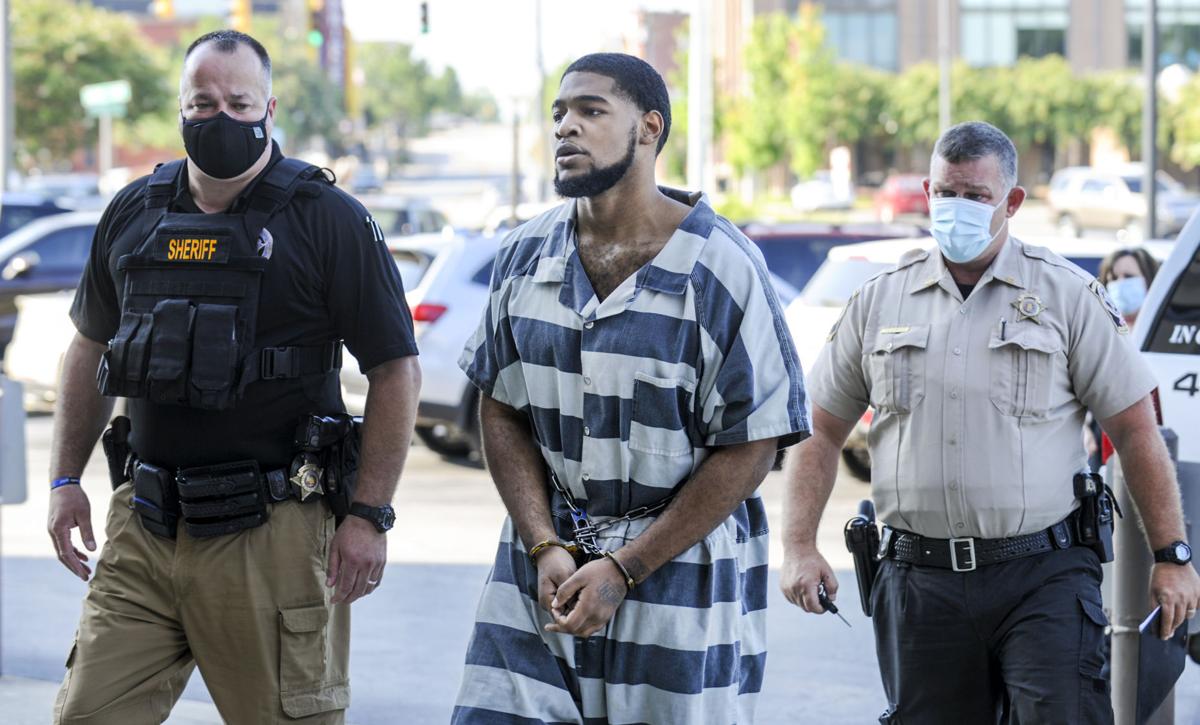 Cedric Cowan is escorted into the Morgan County Courthouse for his sentencing hearing Friday. A Morgan County jury in November found Cowan, 16 at the time of the crimes and 21 now, guilty of three counts of capital murder, five counts of first-degree robbery and one count of shooting into an occupied dwelling. [JERONIMO NISA/DECATUR DAILY]

Cedric Cowan is escorted into the Morgan County Courthouse for his sentencing hearing Friday. A Morgan County jury in November found Cowan, 16 at the time of the crimes and 21 now, guilty of three counts of capital murder, five counts of first-degree robbery and one count of shooting into an occupied dwelling. [JERONIMO NISA/DECATUR DAILY]

Cedric Cowan, convicted of capital murder for his involvement in a May 2015 crime rampage in Decatur that left two people dead, had no parental guidance after his father was sent to prison when the son was 8 and still can be rehabilitated, his attorneys argued in a sentencing hearing Friday.

After hearing testimony from a pediatric neuropsychologist and Cowan’s parents during a daylong sentencing hearing, Morgan County Circuit Judge Jennifer Howell continued the hearing until Aug. 20 to review testimony and defense and prosecution arguments.

A Morgan County jury in November found Cowan, 16 at the time of the crimes and 21 now, guilty of three counts of capital murder, five counts of first-degree robbery and one count of shooting into an occupied dwelling.

Cowan and three other defendants, including his older brother, Joseph Cowan, were charged with several robberies and the deadly shootings of Joshua Davis, 25, at Wilson Morgan Park and Antonio Hernandez-Lopez, 27, in the carport of an Albert Street home over the course of several days.

Cedric Cowan’s attorneys argued that the U.S. Supreme Court has held that even when a juvenile has been convicted of capital murder, they should not be sentenced to life without parole except if they are so “irreparably corrupt” or “permanently incorrigible” that they are beyond rehabilitation.

“Life without parole is unconstitutionally excessive” except in those rare cases, said Brent Burney, one of Cowan’s attorneys.

Burney said that after Cedric Cowan’s father, Joseph Cowan Sr., went to prison when Cowan was 8, he lacked parental supervision and had to move with his mother and older brother to a rental home in a crime-ridden part of town.

“He never got a chance to mature, not with the guidance he needed,” said Carl Cole, Cedric Cowan’s other attorney. “It’s undisputed that Joseph Jr. fired the death shots” at Davis and Hernandez, Cole said, and the older brother was “the most culpable” in the crimes.

A sentence of life with the possibility of parole gives Cowan “an opportunity to change and to do something of value and make amends for what happened in this crime,” Cole said. “The Supreme Court has said that life without parole is equal to the death penalty.”

But District Attorney Scott Anderson said that to claim that Cowan’s immaturity kept him “from knowing right from wrong is an affront to this court.” He said that jurors in Cowan’s November trial concluded that “this man had a specific intent to murder” both Hernandez and Davis.

Anderson said that what disturbs him about the case is the “time lapse” between each of the crimes, and the fact that Cedric Cowan could have decided to discontinue in the crime rampage.

“The Supreme Court has decided that there are cases where a juvenile defendant deserves a sentence of life without parole,” he said. “I submit this is one of those cases.”

The Alabama Supreme Court, in a 2013 decision, set out 14 factors for a judge to consider in making that determination, including the juvenile’s age at the time of the offense, and immaturity and failure to appreciate risks and consequences, the circumstances of the offense, the extent of the juvenile’s participation in the crime and the juvenile’s family, home and neighborhood environment.

Dr. Joseph Ackerson, a pediatric neuropsychologist, testified that he reviewed Cedric Cowan’s juvenile justice and probation records and school records, but didn’t meet with Cowan because Cowan didn’t want to participate in any evaluations.

“He is not incorrigible,” he said, when asked about Cowan, based on his research and his review of the records.

“With structure and supervision, he can be rehabilitated?” Burney asked. “Yes,” Ackerson said.

During his testimony, Joseph Cowan Sr. said that he took his son, who he called his “road dog,” to school and spent a lot of time with him until he went to prison, at Limestone Correctional Facility, in 2007. He said Cedric had been an A-B student and was involved with youth sports.

Joseph Cowan Sr. said he saw his son about once a month until being transferred to other facilities farther away, and only saw him once in the next six years. He said his son stopped participating in sports, and from what he was told, Joseph Jr. was the “male figure” in Cedric Cowan’s life after that.

When questioned by Howell, Joseph Cowan Sr. said he did not rebuild a relationship with his son or his wife, who is Cowan’s mother, Tabitha Cowan, when he was released from prison in 2014.

Tabitha Cowan testified that Joseph Jr., Cedric and her older son lived with her after her husband left for prison, and despite financial issues, “I still made sure they had what they needed.”

Burney presented Cedric Cowan’s records showing he was charged in juvenile court for truancy in 2012 for missing 12 to 15 days of school, and two years later, at 14, committed an armed robbery at a convenience store. Burney said that Cowan had admitted to authorities that he started smoking pot at 13.

When Burney asked if she provided any supervision to her son, Tabitha Cowan said, “I tried my best to.” She said she would call Cedric Cowan from work in the mornings to get him to go to school.

“I tried my best, but he wouldn’t listen to me,” she said.

Two other defendants in the case, Cortez Mitchell and Amani Goodwin, are in prison serving life sentences with the possibility of parole on various counts, including murder.

Would you take a COVID-19 vaccine that received Food & Drug Administration approval?