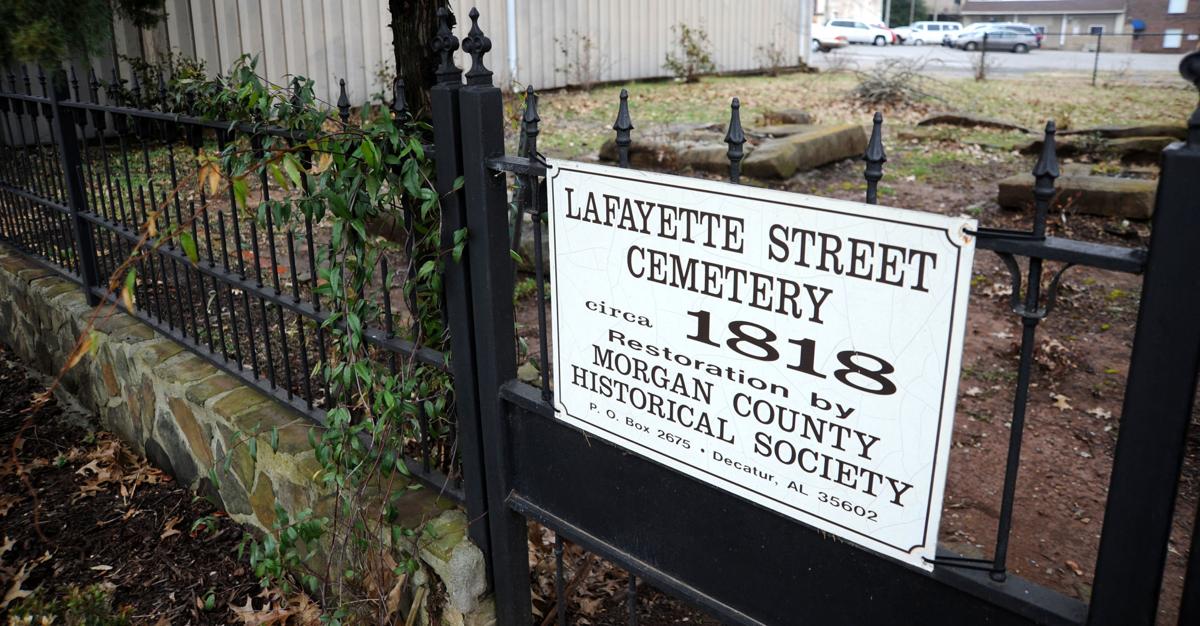 Lafayette Street Cemetery near Bank Street was one of the first cemeteries in Decatur. [DEANGELO MCDANIEL/DECATUR DAILY] 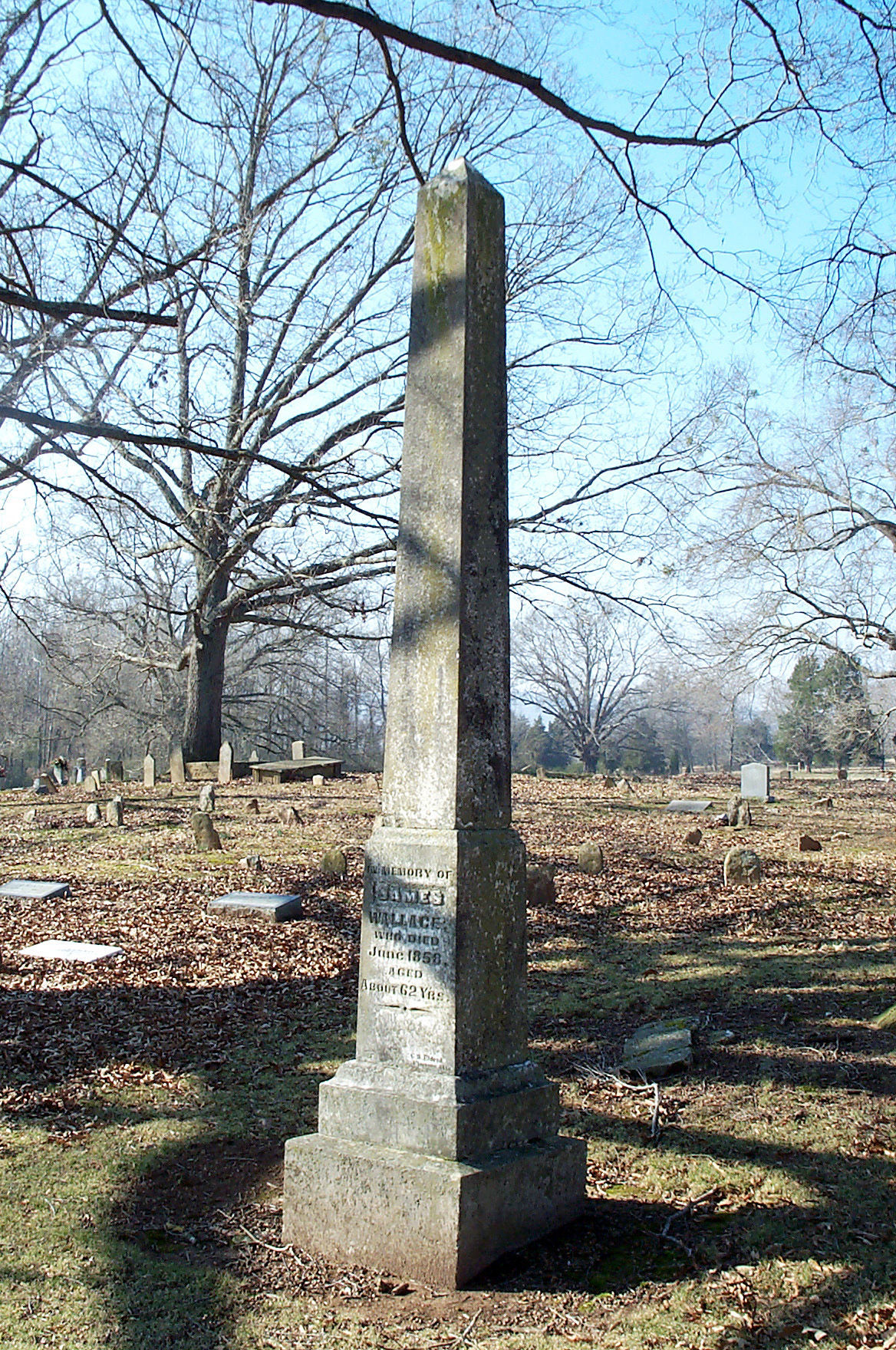 Residents in Mount Hope placed a marker over James Wallace's grave to honor his deeds in the community. [DEANGELO MCDANIEL/DECATUR DAILY]

Lafayette Cemetery near Bank Street was one of the first cemeteries in Decatur. [DEANGELO MCDANIEL/DECATUR DAILY] 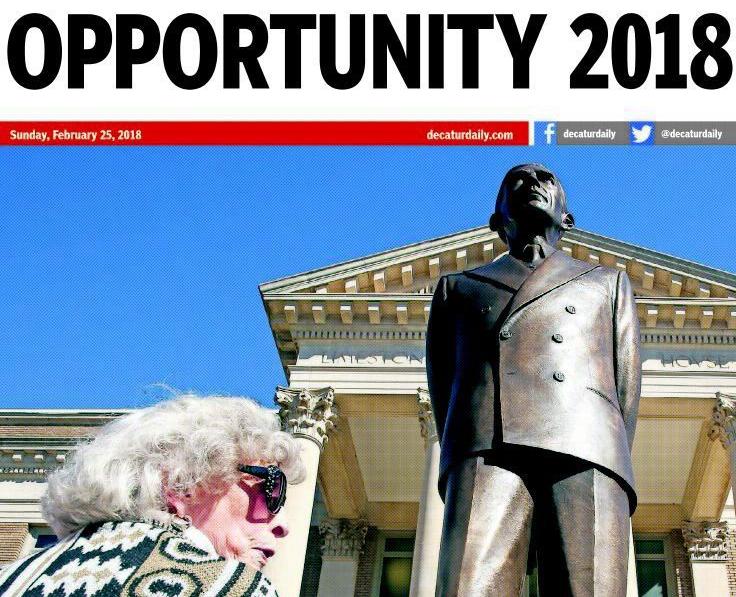 Starting today, The Decatur Daily is publishing the first of four OPPORTUNITY special sections. In section G, readers will find:

Lafayette Street Cemetery near Bank Street was one of the first cemeteries in Decatur. [DEANGELO MCDANIEL/DECATUR DAILY]

Residents in Mount Hope placed a marker over James Wallace's grave to honor his deeds in the community. [DEANGELO MCDANIEL/DECATUR DAILY]

Lafayette Cemetery near Bank Street was one of the first cemeteries in Decatur. [DEANGELO MCDANIEL/DECATUR DAILY]

Starting today, The Decatur Daily is publishing the first of four OPPORTUNITY special sections. In section G, readers will find:

The crumbling tombstones in the Lafayette Street Cemetery near Bank Street are not as tall as tombstones in other cemeteries in Lawrence, Limestone and Morgan counties.

But they have stories, and some of the stories have nothing to do with the people buried there, Morgan County Archivist John Allison said.

Cemeteries — and sometime the size of a monument over a grave — are an important part of the Tennessee Valley’s history.

“Cemeteries are important because they tell us a lot about our past,” Allison said.

The cemetery on Lafayette Street in downtown Decatur, which was the subject of a 1907 court battle, is located near an area called “Dead Man’s Alley.” An alley east of the cemetery is where several people, including a Decatur police officer, met a violent end because the Decatur of today was much different than the Decatur of more than a century ago.

“There were a lot of pool halls, houses of ill repute and bars in Decatur at the time,” historian Libby Boggess said.

The cemetery is one of the oldest in Morgan County.

Phil Wirey, vice president of the Morgan County Historical Society, has researched and published a paper about the cemetery.

He said Dr. Henry Rhodes, one of Decatur’s five founding fathers, established the cemetery as a family cemetery in the early 1800s, but other families started using the cemetery for burials after Rhodes sold his home.

“Many of the names buried here have been obliterated over time since tombstones have been destroyed by vandalism, the elements and construction,” Wirey wrote.

Some of the tombstones were damaged, he said, when the cemetery was part of the Union fort in 1864.

In the mid-1980s, the Morgan County Historical Society put together a restoration plan to permanently save the cemetery and document its history, including stories of the alley nearby.

In Lawrence County, for example, historians were recording the story behind the 20-foot monument in Rock Springs Cemetery near Mount Hope School that honors James Wallace, a business owner who did a great deed for the tiny Lawrence County hamlet more than 135 years ago.

When he died June 8, 1858, Wallace, a single man born in Greene County, Tennessee, left his estate to construct and fund the operation of a school in the community. He made no provision in his will for his burial or grave marker, but the community erected the tall monument in his honor years after his death.

Tall monuments, like the one Mount Hope constructed for Wallace, are rare today, but in the late 1800s, and at the beginning of the 20th century, they were common, especially for the wealthy.

Pond Spring, site of the home of Gen. Joseph Wheeler, is perhaps home to the tallest monument. That one is about 30 feet tall and stands over the grave of Daniella Ellen Sherrod Wheeler, the general’s wife.

Daniella was the daughter of Richard Jones and Lucy Early Jones. She was born Aug. 20, 1841, into one of the wealthiest families in the area. She married into another family of wealth, and after the death of her first husband, she inherited the Pond Spring plantation.

Joe Wheeler is buried in Arlington National Cemetery under a monument shaped like the one at Pond Spring.

Limestone County does not have a lot of tall or ornate monuments, but some of the state’s most historic figures are buried in the county, including a former governor.

George S. Houston, the first Democratic governor after Reconstruction, is buried in the city cemetery in Athens. He defeated Republican David P. Lewis of Lawrence County in the 1874 gubernatorial race.

Although his win brought joy to Limestone County, Houston, who was born in Williamson County, Tennessee, on Jan. 17, 1811, may be best remembered for his actions as a U.S. congressman in 1860.

After Abraham Lincoln's election, Houston, who opposed secession, held secret meetings with northern Democrats in an effort to save the union.

On Feb. 4, 1861, Houston burst into tears on the House floor when Alabama’s congressional delegation withdrew from the U.S. House of Representatives.

A monument honoring Nicholas Davis Sr. is as tall as Houston’s.

Davis, a War of 1812 veteran, came to Limestone County in 1817, and represented the county at the first constitutional convention. He made two unsuccessful bids for governor, in 1831 and 1847. His grave is on Nick Davis Road.

Some of the tallest monuments in Morgan County are in the Garth Cemetery in Southwest Decatur near Danville Road.

The cemetery contains the remains of Gen. Jesse Winston Garth and two of his daughters, who married into prominent families.

Garth, considered by most historians to be one of Decatur’s founders, was born Oct. 17, 1788, in Albemarle County, Virginia.

Garth was a War of 1812 veteran and opposed secession. After his death on Sept. 8, 1867, a local newspaper wrote that Garth was "a true patriot. He was devoted to the union and was willing to give up his hundreds of slaves to save the union."

The monument that honors Dr. Sykes and his wife is about 20 feet high and perhaps the tallest in the cemetery.

On the other end of the cemetery is a monument someone erected to the memory of Garth's second daughter, Sarah Dandridge, and her husband, Dr. Charles Fenton Mercer Dancy.

The monument is between 15 and 20 feet high and has the names of the Dancy children on one side.

Sarah Dancy is described on the monument as "a woman of great intellect and culture. Her life was spent in doing good.”

One monument in the cemetery marks the burial site of a slave who belonged to Garth’s wife.

The monument reads: “To the memory of Charlotte, a faithful slave, a sincere friend. She was born upon the estate of Nathaniel W. Dandridge, Hanover City, Virginia, and died April 5, 1859, at age 50. Cheerfully, affectionately, faithfully she discharged the various duties of life.”

Decatur’s Sykes Cemetery also has an interesting history and was the 10th from Morgan County to be added to the list of historic cemeteries in Morgan County.

When the state’s 1901 Constitution banned the burial of blacks and whites in the same cemeteries, Decatur business owner J.J. Sykes bought the property in Moulton Heights.

The property was in the county, so residents unsuccessfully brought their concerns before the County Commission. They also presented a petition to the City Council.

Sykes, who owned a funeral home and sold burial policies, told the local paper he was not violating the law and that blacks had to “bury their dead somewhere.”

He offered unsuccessfully in October 1901 to sell the land for a “moderate” profit or swap it for property in another location.

Despite everything that is known about the cemetery, one of the haunting questions is where Sykes is buried. Several marked graves exist for prominent Sykes family members, but none for J.J. Sykes.

“You’d think a man with so much means would have a marker,” said Peggy Towns, a local author and historian who did the research that got Sykes Cemetery put on the historic registry.

Towns has family members buried in the cemetery, and she has interesting family stories about them, including the family tale about Fred “Fayette” Polk.

For almost a day, he was in his coffin, dressed and ready to be interred after the family had moved the old cedar box that held his body to the barn. There was a problem, though. Polk wasn’t dead.

He died about 50 years later, and the family buried him in Sykes Cemetery.

Towns heard the story about Polk’s family preparing him for burial from her grandmother, who was Polk’s sister.

“I don’t know if he was unconscious or what happened to him,” she said. “Big Momma told me he got up the next day, walked in the house and told his mother he was hungry.”

Bertha Lee Polk Lyle, who was born on a Lawrence County farm on March 25, 1913, to former slave Allen Polk and his second wife, Emma Early Polk, is also buried in the cemetery.

Lyle was the River City’s first black female preacher and Towns’ grandmother. She died in 1975.