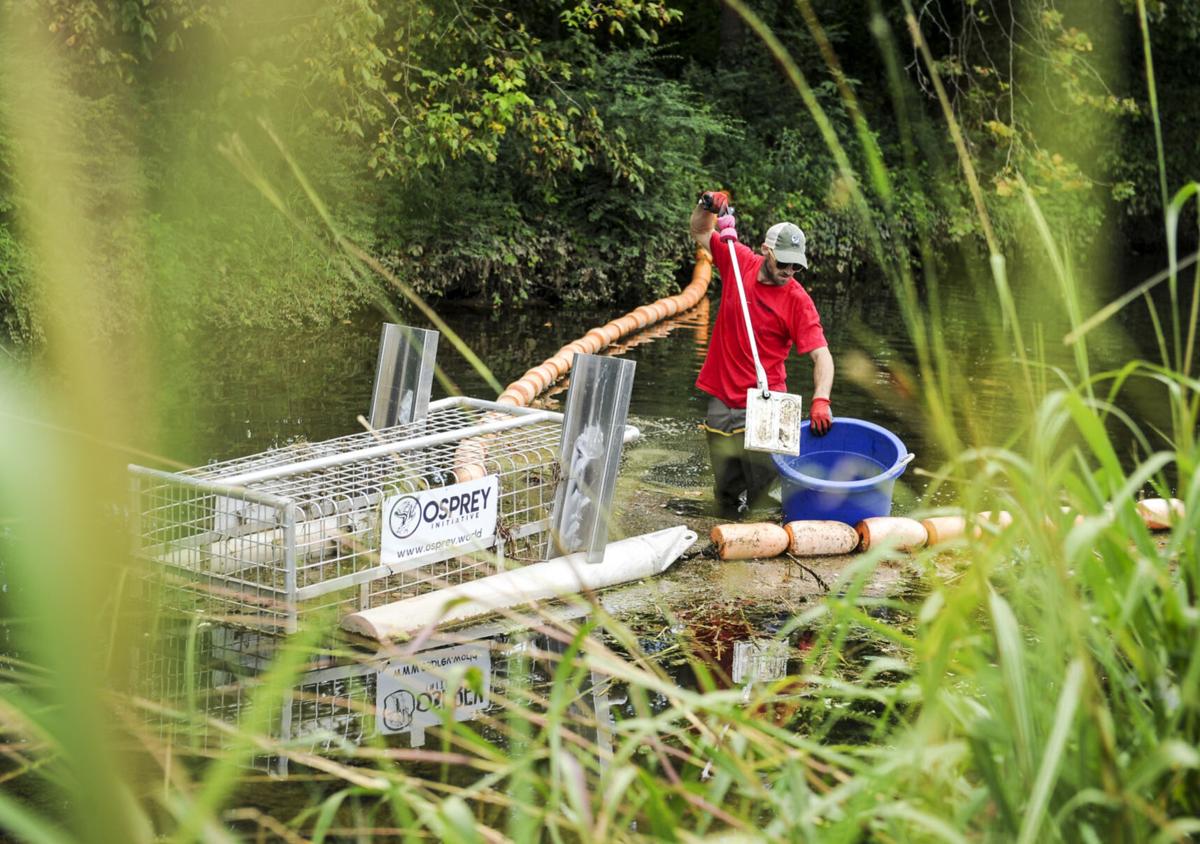 Osprey Initiative has collected more than 5,000 pounds of trash and debris from Decatur waterways in the last year. On Tuesday, employee Pat Underwood cleans the litter trap in the creek at Wilson Morgan Park. [JERONIMO NISA/DECATUR DAILY] 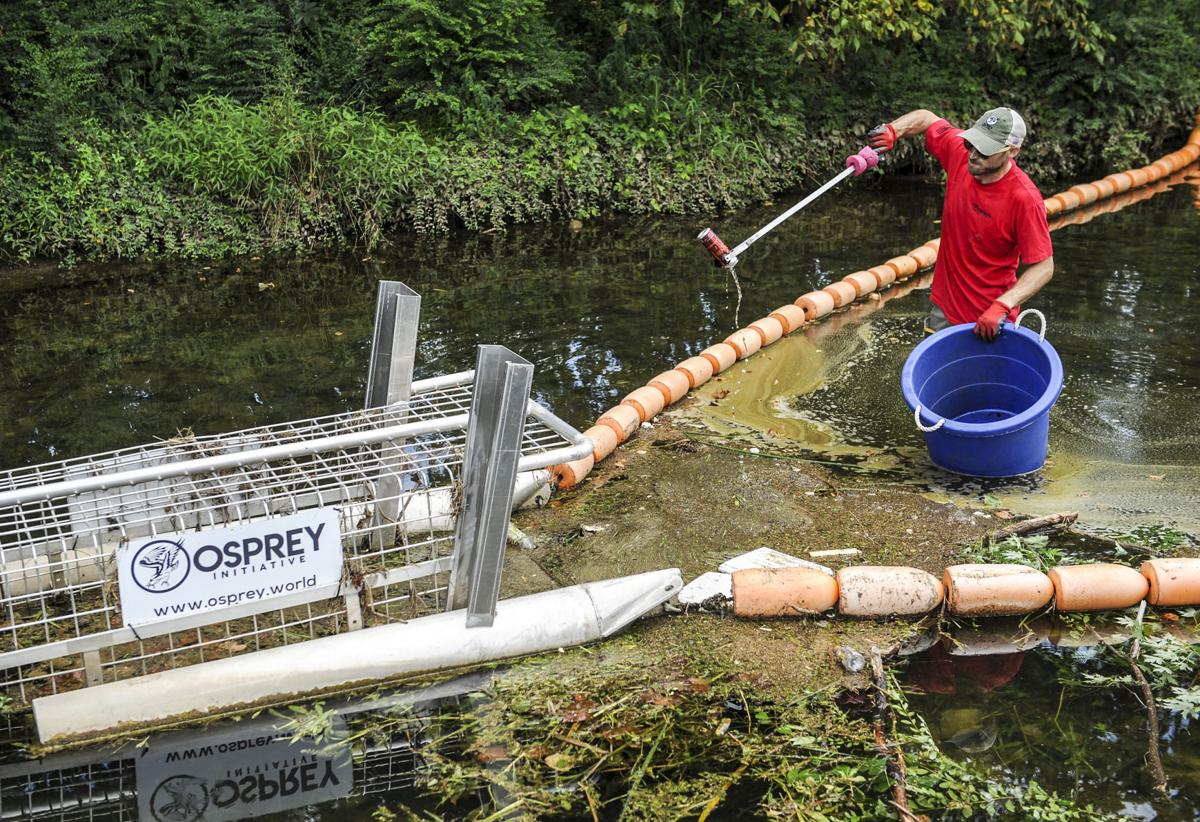 Pat Underwood, an employee of Osprey Initiative, retrieves trash from the litter trap in the creek at Wilson Morgan Park on Tuesday. [JERONIMO NISA/DECATUR DAILY]

Osprey Initiative has collected more than 5,000 pounds of trash and debris from Decatur waterways in the last year. On Tuesday, employee Pat Underwood cleans the litter trap in the creek at Wilson Morgan Park. [JERONIMO NISA/DECATUR DAILY]

Pat Underwood, an employee of Osprey Initiative, retrieves trash from the litter trap in the creek at Wilson Morgan Park on Tuesday. [JERONIMO NISA/DECATUR DAILY]

A company hired to clean up Decatur waterways collected more than 5,000 pounds of trash and debris in the last year, but the price will double this fiscal year if the City Council renews the contract.

Osprey Initiative founder Don Bates gave the council a discount in the inaugural year of using the Litter Gitter, but the price would jump to $65,000 this year if the council renews its contract with the Mobile-based firm.

In a work session this week, Bates proposed changes to the way Osprey will continue the fight against litter in Decatur’s waterways.

In the annual contract that ran out June 30, Bates provided two Litter Gitters, the company's name for the litter traps, for $30,000.

The Litter Gitter is a device made of netting, rope, aluminum pipes and pool noodles to catch litter as it flows through the city’s creeks and drainage ditches.

Bates added two more devices midway through the year as test traps at no cost to the city. He later upgraded the traps from PVC to aluminum to improve sturdiness. He hired local employees, like Pat Underwood, to empty the traps, pick up litter and sort the trash to collect data and to separate recyclable items.

Bates told the City Council on Monday that he thinks his company’s efforts were successful last year after the initiative collected 5,311 pounds of trash and debris.

His litter traps caught 977 pounds of litter and “tactical cleanups” yielded 3,208 pounds of trash. Osprey also picked up 1,891 pounds of debris like tires, chairs and Styrofoam, he reported.

“This would fill up about 11 standard dumpsters,” Bates said. “And we’re pretty proud of how much we collected.”

They collected almost 780 pounds, about a third of the trash removed, of recyclable items like aluminum, plastic and cardboard. These items were carried to a recycling center that’s willing to take unclean items, he said.

Bates said they had to “really learn on the fly” with their efforts. The initial two litter traps went to Clark Spring, which flows into and out of Wilson Morgan Lake, and Dry Creek near First Street Northwest, which feeds directly into the Tennessee River. The two test sites were at Black Branch Creek near Point Mallard Drive and a creek off Stratford Road Southeast.

Bates said they figured out the traps weren’t as effective or as stout in high-flow areas like Spring Branch. He said the trap wasn’t needed at Black Branch because of the lack of trash flowing through it.

“Sometimes it’s just best to pick up in an area every once in a while,” Bates said.

Bates said they found it worked better to pick up trash in the area before it gets to the trap. This is why his crews conduct tactical cleanups and support community cleanups.

“Litter is not always transient, so it doesn’t always make it to the trap,” Bates said.

Bates said the litter grates are an example of an effective way of catching trash early.

Bibbee said she wants to make the $50,000 for grates an annual expense in the budget “in the same way we allocate $100,00 annually for the (intersection wheelchair) ramps.”

Rickey Terry, director of Street and Environmental Services, said installation of the litter grates “was tricky” because the grates come in different sizes and the storm drains aren’t consistent in size.

Terry said a vacuum truck usually cleans out the grates, although occasionally a crew member “has to pick up some items by hand.” They’ve been able to keep up with the collected trash so there haven’t been any storm water backup problems so far.

Bates said the plan for the new year is to keep a Litter Gitter at Clark Spring and continue working on finding the right spot for Dry Creek. He said they plan to try a boom system in Dry Creek.

“We’re still trying to find out where the trash is coming from (in Dry Creek),” Bates said. “It may be coming from the river.”

Bates said he’s working to identify all of the city’s waterways and then set a goal of cleaning them upstream and downstream two times next year. There are also other possible areas in the city where a litter trap might be effective, he said.

Underwood is the only local employee right now. Bates and other Osprey employees come up to help with the tactical cleanups.

“We would like to hire one or two more local people to help Pat,” Bates said.

Bibbee told Bates she thinks he’s done a “fantastic job,” and she likes that he is hiring local people.