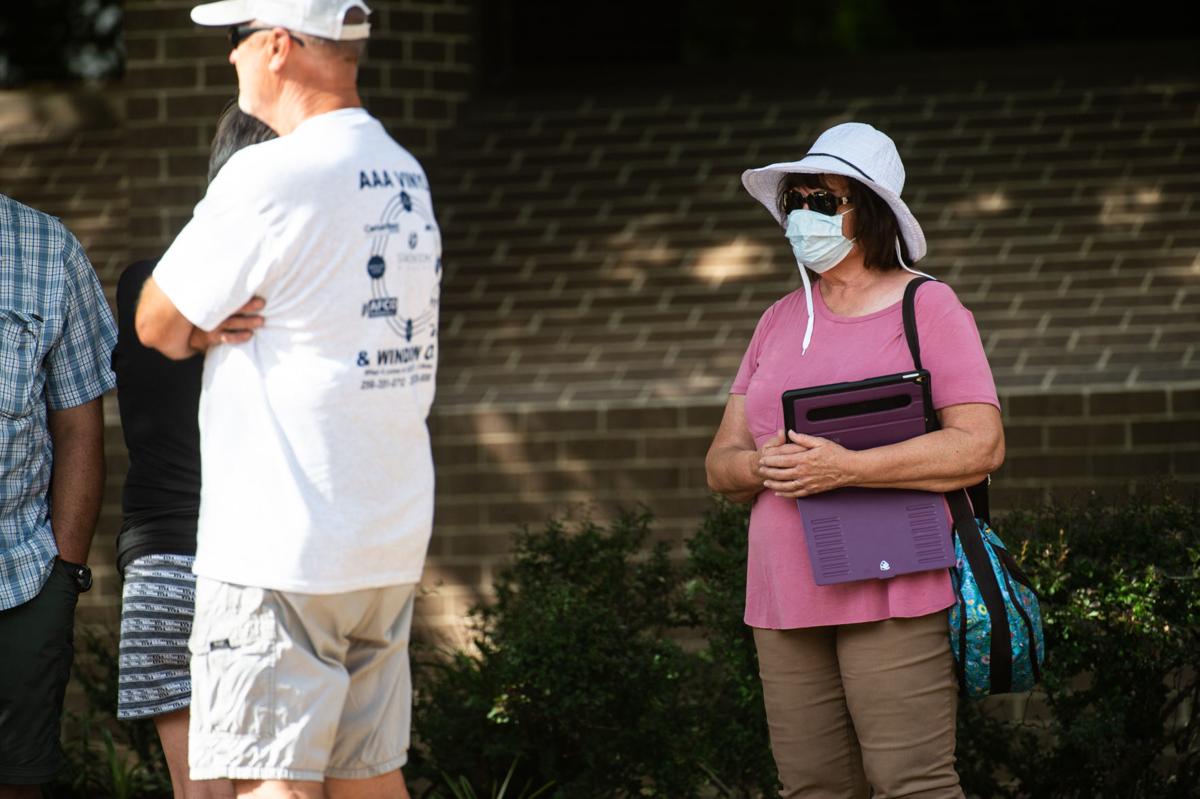 A lone person wearing a face mask stands apart from protesters as they gather outside Decatur City Hall on Tuesday. [DAN BUSEY/DECATUR DAILY] 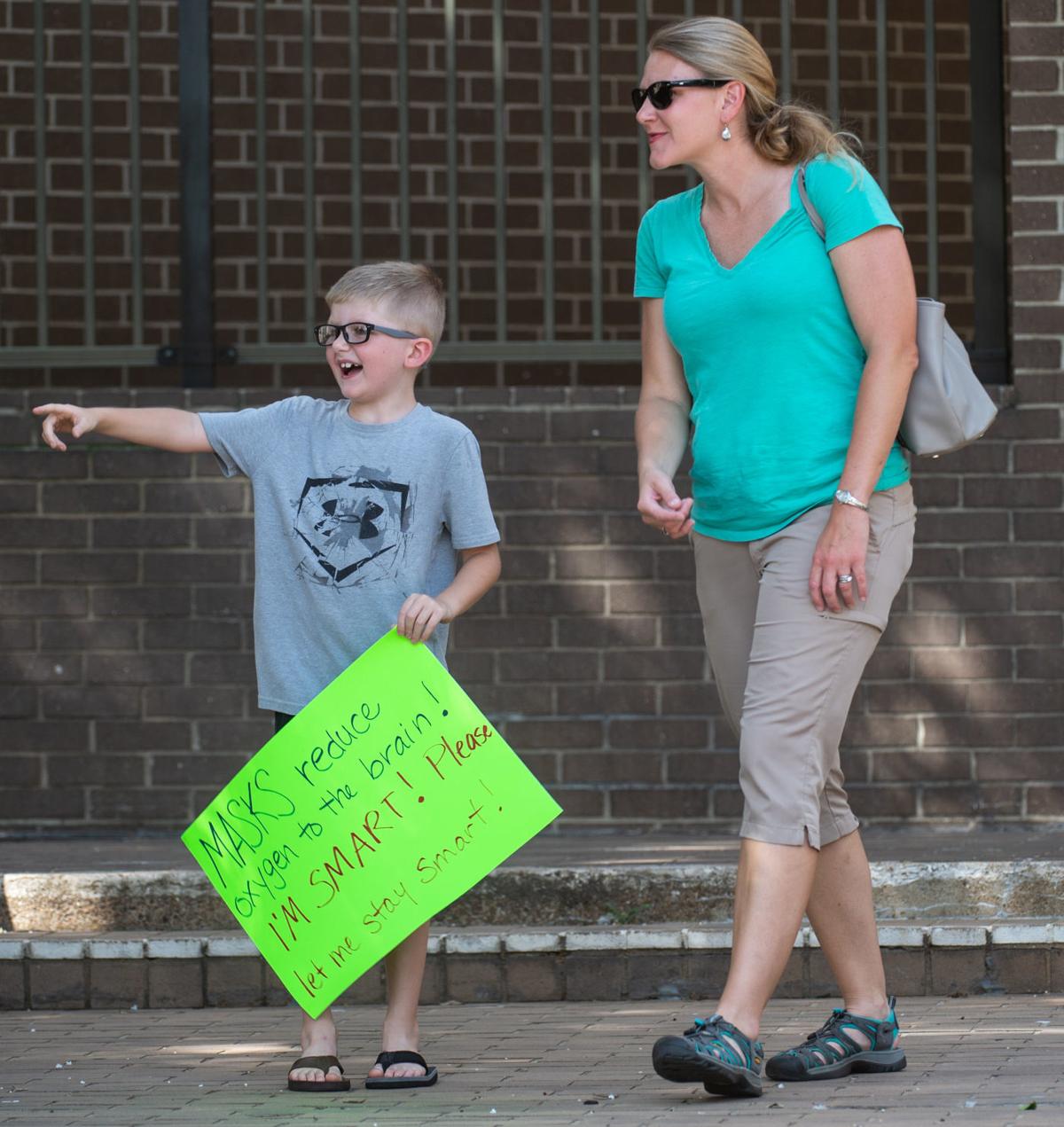 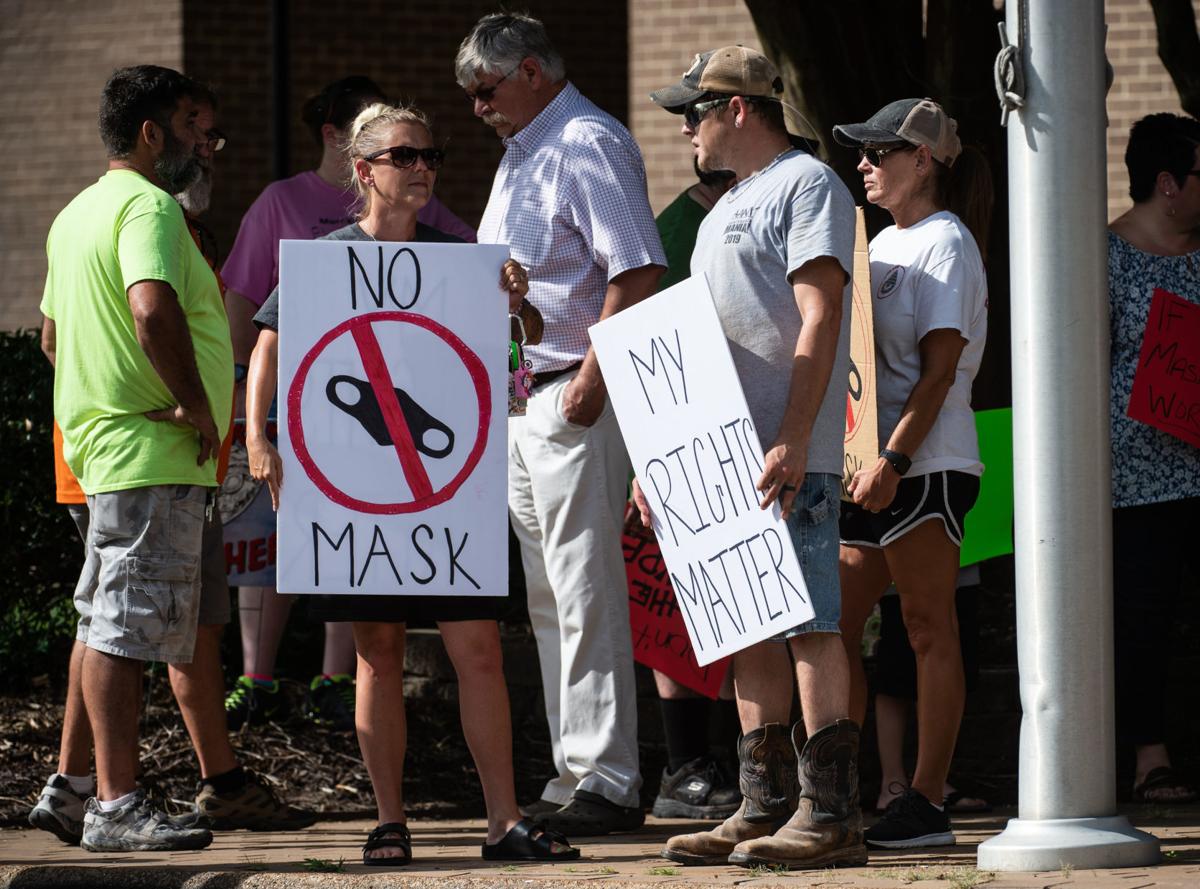 A lone person wearing a face mask stands apart from protesters as they gather outside Decatur City Hall on Tuesday. [DAN BUSEY/DECATUR DAILY]

Decatur City Council members said Tuesday they weren’t ready to consider an ordinance, with possible fines and jail time, requiring people in public to wear a face covering during the coronavirus pandemic.

About 25 people were outside of City Hall protesting the possible mandate before the called meeting, and a number of them spoke to the council during the second called meeting in two days.

There was some confusion over the proposed ordinance presented Monday by the Legal Department, which would impose fines of up to $500 and up to 30 days in jail. Councilwoman Kristi Hill and many in the crowd said Tuesday they thought it was the ordinance the council would vote on, but Council President Paige Bibbee said it was only an example.

The council members agreed they weren’t ready to vote on it Tuesday. Councilman Billy Jackson said he wanted to meet again this week because he thinks time is of the essence as COVID-19 cases and hospitalizations continue to rise in Morgan County.

However, Councilman Chuck Ard said he couldn’t meet because of his business and the upcoming July 4 holiday, so the council planned a work session for 4 p.m. Monday.

Mayor Tab Bowling urged the council, unless the number of infections continues to rise, to stick with the resolution it approved Monday suggesting that people should wear face coverings in public.

This irritated Jackson, who after the meeting accused Bowling of “playing politics just before an election. This is not something you can go wave your finger in the air and go where the wind blows. This is a serious matter.”

Bowling said he’s against passing an ordinance right now that would impose possible fines and jail time because the business community is against it.

“Our local economy is hurting right now,” Bowling said. “And if we start requiring face masks, it’s going to hurt our businesses even more. We need to give the resolution an opportunity to work, and I think people will behave as they should.”

Bowling said he talked to John Seymour, president and CEO of the Decatur-Morgan County Chamber of Commerce “and he is against it. When has Mr. Jackson talked to Mr. Seymour? I doubt he has, and I have a problem with that.”

Local business owner Anthony Murk said during the protest he has a problem with the council “possibly laying at my feet the responsibility of enforcing an ordinance that requires face masks.”

Murk said he’s not a cop and, if he were and the council approved such an ordinance, “I would lay my badge down because I couldn’t conscientiously enforce it.”

Cameron Street resident Adrian Baker said he is concerned about any law “that has neighbors calling the police on neighbors.”

On behalf of about 10 downtown business owners, art shop owner DeAnn Meely wrote an email to the council that said they’re also concerned about the council possibly requiring businesses to enforce a face mask ordinance.

“If a customer refuses our request to put a mask on, we don’t want to have to bear the burden of removing them from our business,” Meely wrote.

Meely wrote they are concerned that asking a customer to leave would impact their revenue.

Many of those protesting said they are against an ordinance because they think it would impose on their civil liberties and the right to make a choice. Mayoral candidate Paul Serwatka, who is challenging Bowling in the Aug. 25 election, said he was with the protesters because he believes such an ordinance is unconstitutional.

Serwatka said he thinks the council hasn’t considered the liability it would put the city under, especially with the rising summer heat.

“The first time someone passes out from the 100-degree heat, you’re going to have a lawsuit,” Serwatka said. “I know some people who are already lawyering up over this.”

Mark Griffin, of High Point Drive Southwest, said the data proves face masks are effective, and he urged the council to pass a strong ordinance.

Councilman Charles Kirby was passionate in his defense of the need for an ordinance requiring people to wear masks or face a penalty.

“My wearing a mask and you wearing a mask is about spit splatter,” Kirby said. “Look at the person next to you. Would you wear a mask to keep that person from dying if it meant you have to give up one of your liberties?”

Several people in the audience yelled back that they wouldn’t give up their liberty to save their seatmate.

Serwatka may be what Decatur needs !!!

Dear Ronnie If you are wearing a mask why does it bother you if others aren't? Isn't the mask supposed to keep you safe? Asking for a friend.

So you don't like wearing a mask...then you are really not

If fear is the only thing you have to offer, save it.

That's correct Mr. Stover if you aren't practicing social distancing. It is ludicrous to want to have an ordinance where you are going to fine someone or put them in jail for not wearing a mask The Decatur police don't need this added responsibility added to their daily duties. If they decide to pass the ordinance they need to be sure that mask are available to everyone at all retail outlets in Decatur and not at high jacked prices.

Kirby and Jackson are on top of it as usual. If you can't talk without spitting keep your mouth shut. Pass the ordinance give me another reason not to come to Decatur.

Hate to tell you this, but respiratory droplets exit your mouth during normal conversation. You cannot keep it from happening when talking. It has nothing to do with “talking without spitting”. Ask any ENT doctor or infectious disease expert.