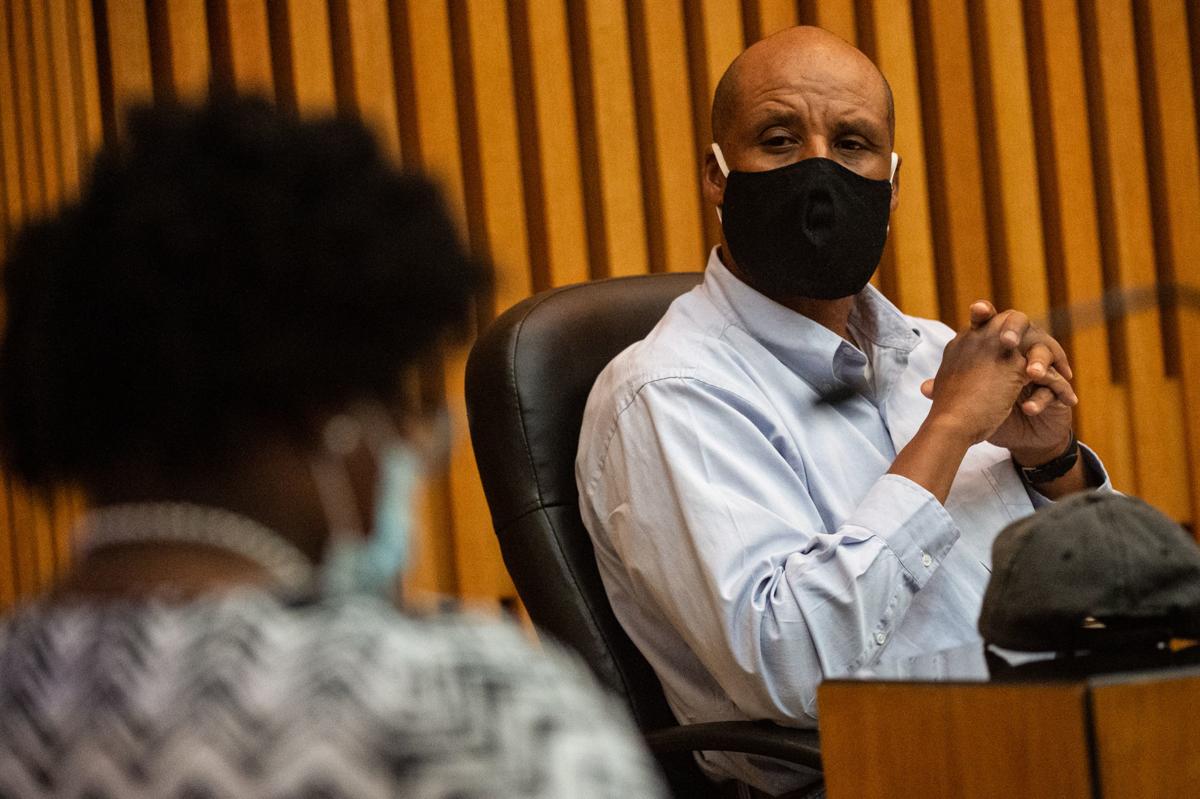 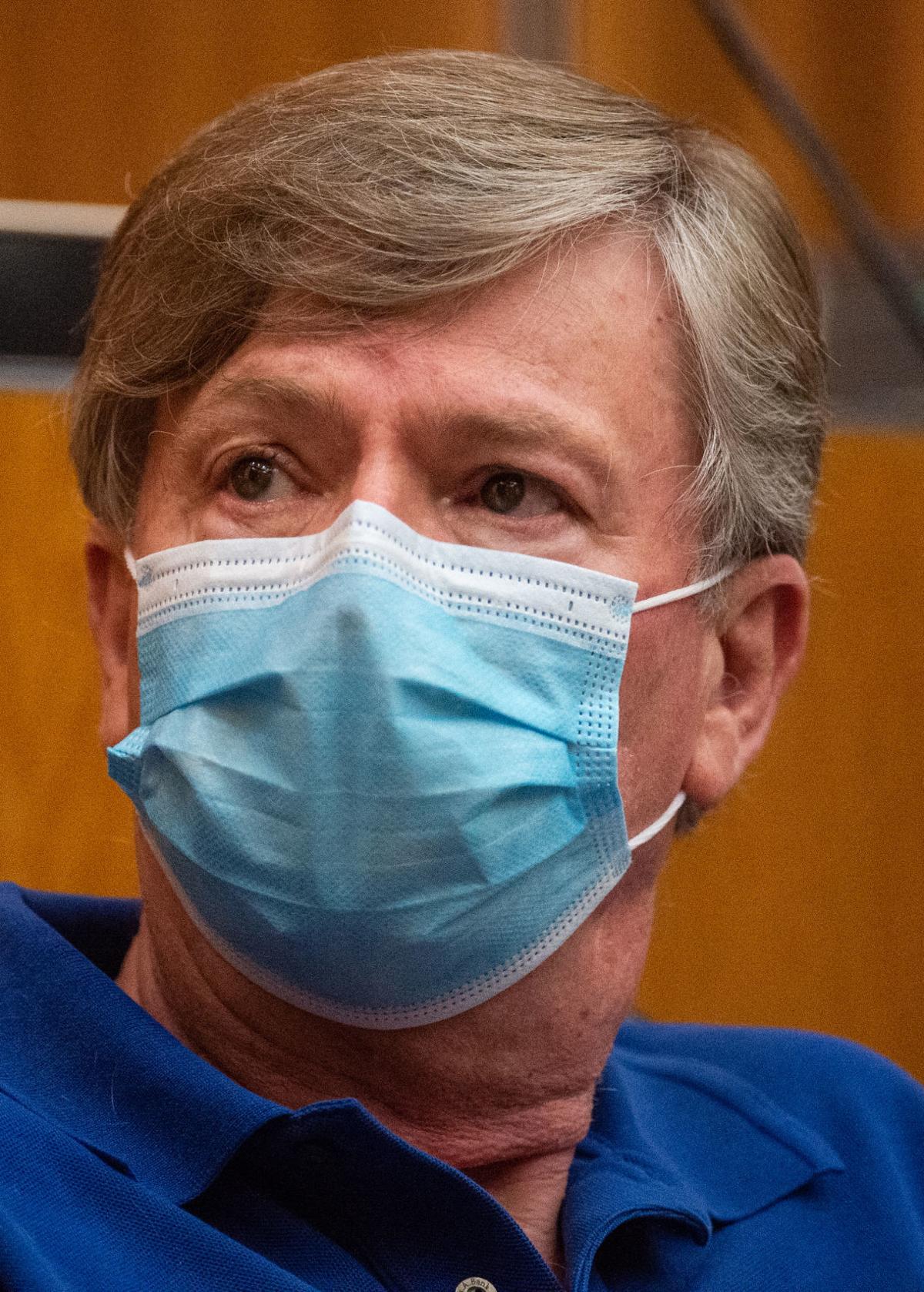 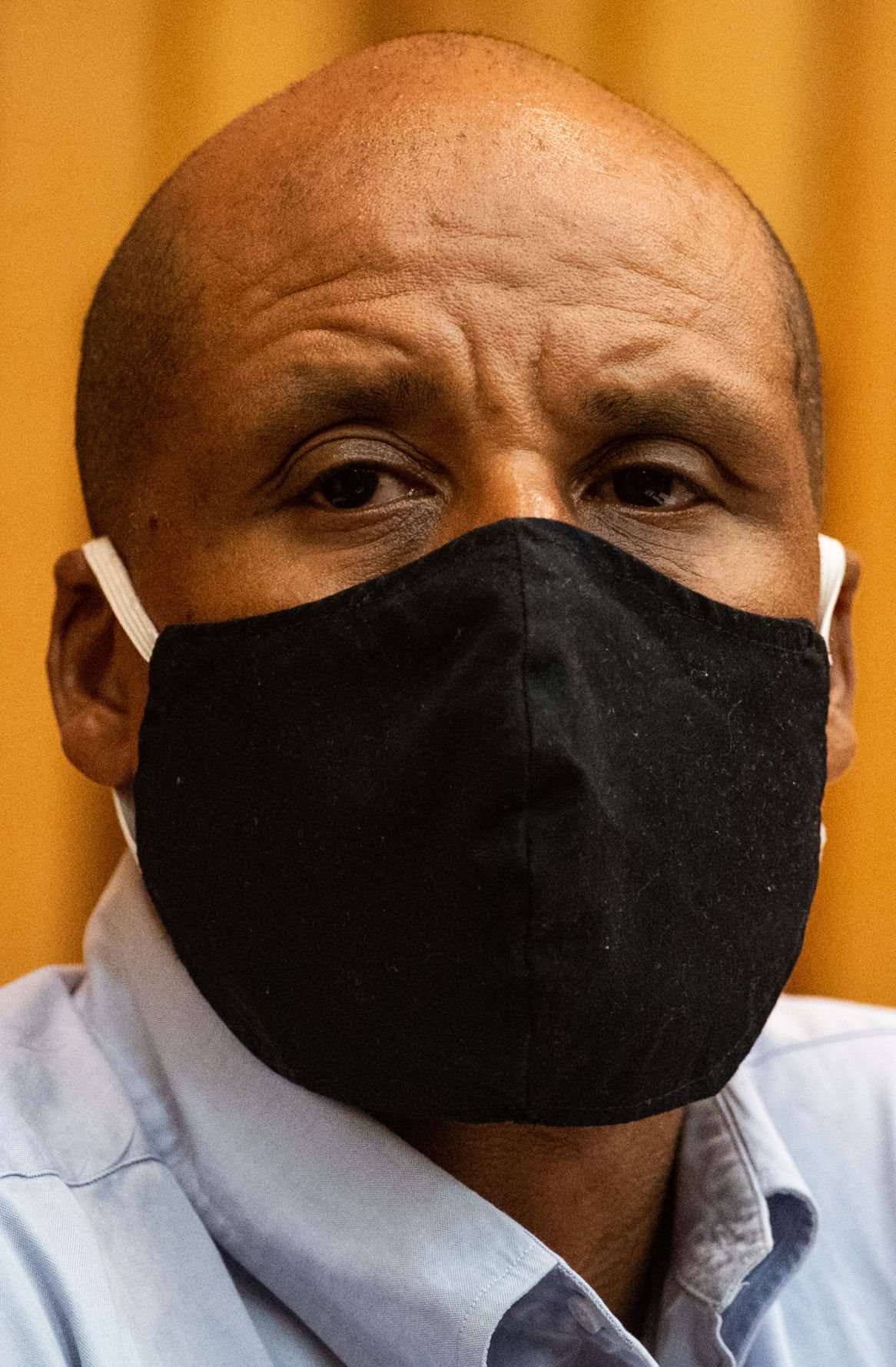 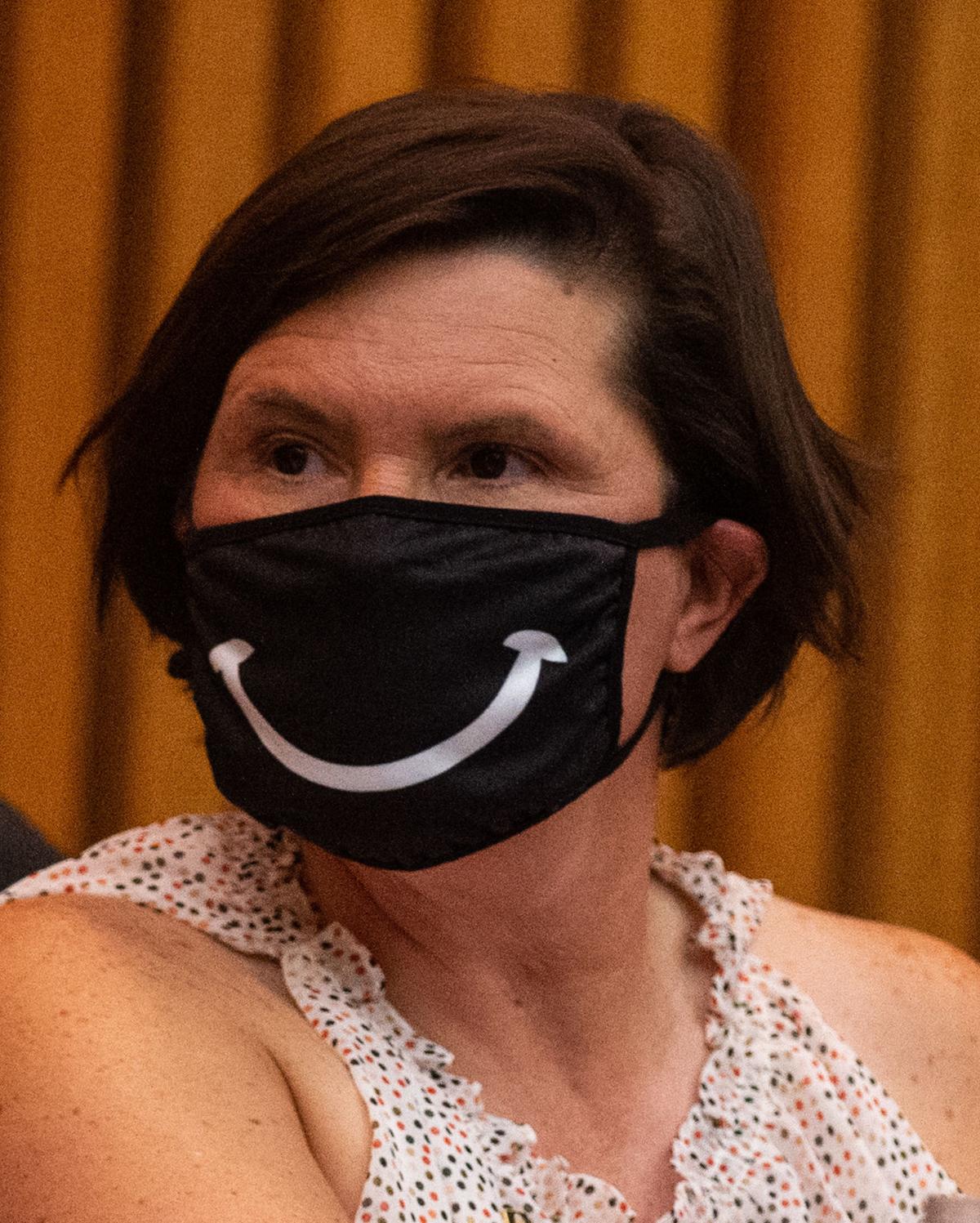 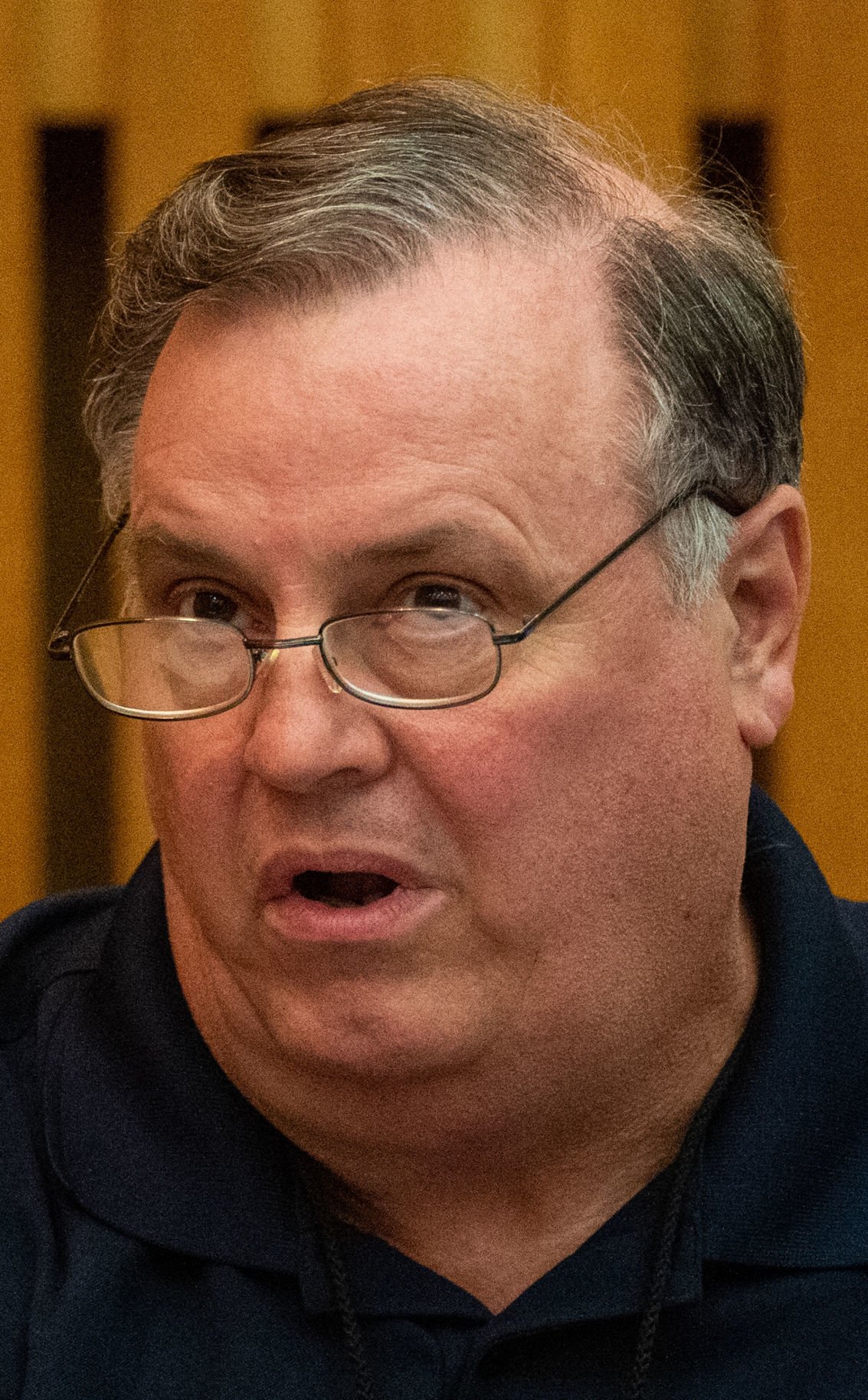 The Decatur City Council passed a resolution Monday that urges residents to wear a face covering in public places to prevent the coronavirus's spread but planned to consider an ordinance as early as today that may impose a fine of up to $500 for failure to wear a mask.

Councilmen Charles Kirby and Billy Jackson each said they want an “ordinance with teeth” and received backing from Council President Paige Bibbee. They compromised on the resolution for the time being with the other two council members, Kristi Hill and Chuck Ard, who wanted a more phased-in approach on mask wearing. The council has another called meeting at 5 p.m. today to discuss a possible ordinance.

More than a dozen residents — part of the largest crowd at a council meeting since the onset of coronavirus restrictions — spoke for and against forcing people in public places to wear face masks or coverings.

Sharon Dickinson, of Johnston Street Southeast, said she owns a business and it was difficult financially when she had to shut down so she hopes requiring masks is a good compromise to slow the virus's spread and help the city avoid another shutdown.

“This will allow the commercial economy and small businesses to continue because I don’t think we can afford another shutdown,” Dickinson said.

Jesse Hockett, a small business owner in Decatur, said the city would be violating his civil liberties.

“When government dictates you have to do something, you’re getting on a slippery slope,” Hockett said. “I served 17 years in the (U.S.) Army, and I will not stand for tyranny and despots just because people are afraid. We in America have to have a backbone.”

But Sharika Vincent, of Wilshire Avenue Southwest, said wearing a face covering shouldn’t be political. She said an ordinance requiring face masks is a medical issue and it’s no different from requiring seat belts in a vehicle or helmets while riding a motorcycle.

“This is simply the best thing that can be done,” Vincent said.

Several residents said the science on masks is vague and there’s no proof that they work. They also argued the test numbers aren’t accurate.

Jackson, who introduced the idea of requiring face covering at the last council meeting, said the number of positive cases in Morgan County is rising and CDC guidelines and other studies show that face coverings are the best way to slow the spread of the coronavirus. There have been 939 positive tests for COVID-19 among Morgan County residents reported through Monday, with 281 of the positive cases, or 30%, occurring in the past 14 days, according to Alabama Department of Public Health data.

Jackson said he favors an ordinance that requires businesses to enforce the wearing of masks. He said the problem is the number of positive tests are trending up and he believes there are more who are positive with COVID-19 than are being reported because so many people are asymptomatic.

“We have a mandate to protect our residents’ health and safety,” Jackson said.

Kirby said he doesn’t like masks but he believes enforced usage is necessary.

“This is a life-saving matter,” Kirby said.

Hill said residents seem to be split on the issue “between those who are worried about their health and those who will never wear a mask because it infringes on their freedom. There are so many unanswered questions that we need to take our time on this.”

Bibbee said she’s concerned that local hospitals are beginning to fill up with coronavirus patients and hospitals in Birmingham and Montgomery are already full.

“We live in Decatur, and it’s a loving, caring city that takes care of its neighbors so I would think people would want to wear a mask,” Bibbee said.

Police Chief Nate Allen said prior to the meeting that he would rather have an ordinance that places the enforcement burden on business owners.

“We have 56,000 residents plus visitors from surrounding areas and there’s only 145 of us,” Allen said of his manpower. “We’re not going to be able to send an officer to every call about someone not wearing their mask. The businesses should not allow people without a mask to enter their business.”

The state on Thursday had the highest number of cases reported in a single day with more than 1,100 new cases.

Decatur becomes one of a number of Alabama cities implementing, or considering, a requirement to wear face masks in public places to curb the spread of the new coronavirus.

Montgomery and Birmingham and Jefferson County have orders in place requiring face masks in public places. The Associated Press reported the mayor of Selma on Friday issued a similar order. Tuscaloosa will vote on a possible mask ordinance Tuesday. Mobile's mayor indicated his council will discuss the idea.

What is absolutely disturbing is that all the recent protesters got a bye on social distancing, facemasks and basically keep your butt at home unless it is absolutely necessary. Not one single word of criticism was made public by any social media or news media outlet. You cannot support one without condemning the other, however, this would not fit the "Narrative" of those holding the pen.

Past the ordinance, give me another reason to stay out of Decatur.

Concleman Jackson has the citizens interest at best, make it an ordance, wear nasks .best for every one ,this virus is going to be around for a long time best take care as possible.

Watch revenues fall again as you REQUIRE a mask. Common sense practices that most of us learned growing up will suffice. 1) Cover your mouth when you cough or sneeze. 2) WASH YOUR HANDS 3) Maintain distance when possible 4) When Bibbee tells you to get on the boxcar, GET ON THE BOXCAR.

If you don't wear a face mask because you don't believe they work,why not wear one and put your belief to the test. If every one wears one and the numbers continue to rise,then you would know they don't work. If the numbers fall,then you would have proof that they do work. As far as being a violation of your civil liberties,you do not have the right to endanger the health of others around you. Requiring mask would be no different than requiring safe driving on our streets,or seat belts,or no smoking. These are in place to protect you and the people around you. Wear the mask,distance yourself,wash your hands and we can all get back to our lives much sooner.

While I think the Monday night meeting was a dog and pony show meaning the council already has it's mind made up. Two words Decatur City council, CIVIL LIBERTIES. Careful, because no matter how great your intentions are it dies not give you the right to infringe on civil liberties. Follow the advice of your police chief, they cannot enforce such an ordinance, they have too much to do as it is.